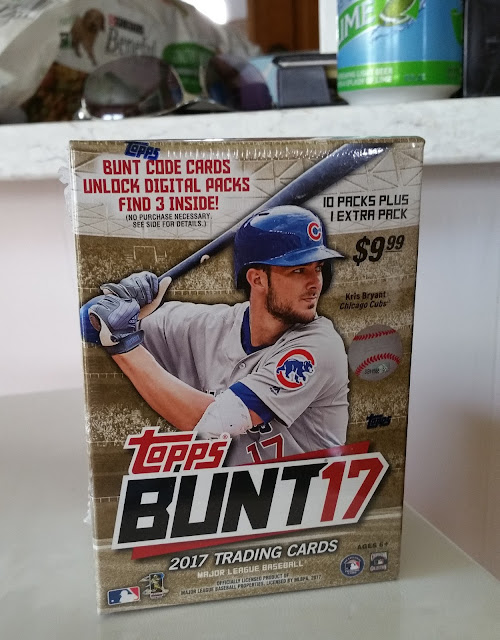 I'm one of those people who was surprised by the early arrival of 2017 Topps Bunt. The debut version of the set from last year was barely seven months old and now we have a new set.

That's why when I last did one of these blaster power rankings posts, I said I wouldn't do another one until the end of the month or next month. I had no idea I'd be buying blasters again so soon.

But as you know, I picked up a couple of Bunt blasters last week, showed one, and saved the other for another Blaster Power Rankings post.

I've already ranked the first blaster to update the power rankings and the Tigers remain ahead with 14 total cards, followed by the Cubs and White Sox 12 each. The Rockies are at the bottom with just two cards.

This second Bunt blaster was very favorable to the Dodgers, which I mentioned in the last Bunt post. This happens so seldom to me that I'm pretty sure this will be the most successful box of cards I open all year.

So let's see the rankings for this second blaster of Bunt. 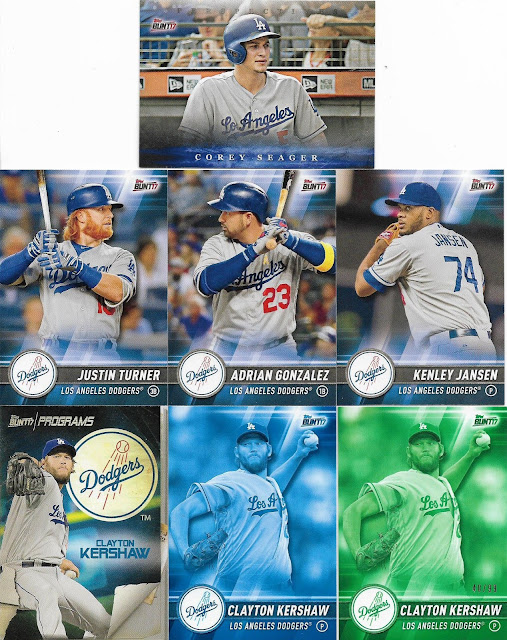 I was practically giddy by the end of opening this blaster. The green parallel (numbered to 99) was the last Dodger card I pulled, too. With a total of seven cards, that's the most of one team that I've pulled out of any of my Power Ranking blasters. 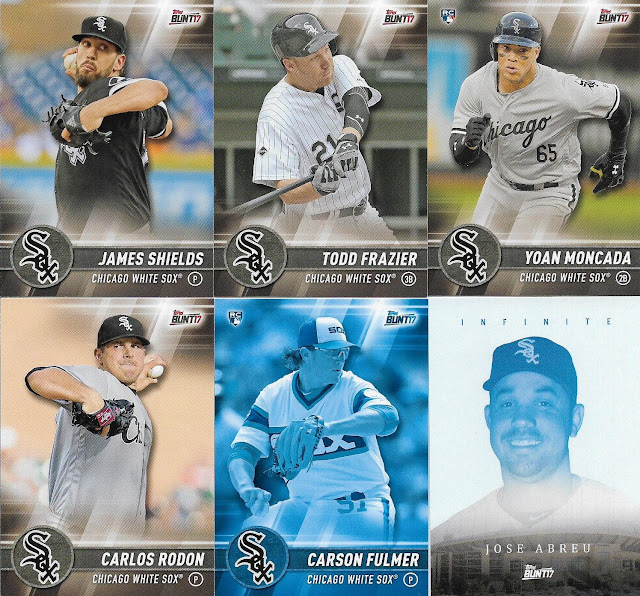 The White Sox have done pretty damn well in the BPRs so far, which makes no sense to me because who's paying attention to the White Sox really. 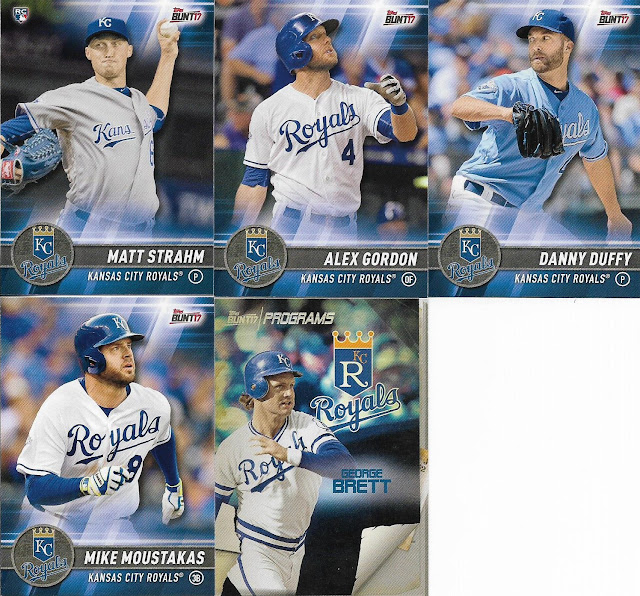 The only place retired players appear in the Bunt set this year are in the inserts. It'd be nice if every player for the Bunt Programs insert was a retired player. 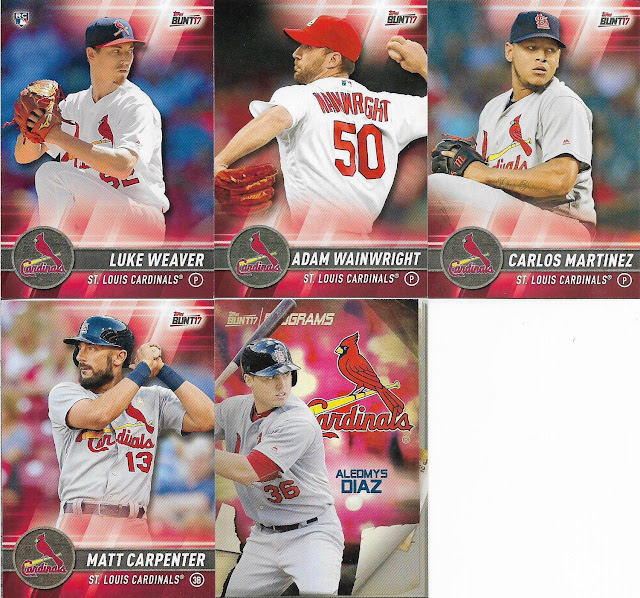 The Dodgers are preparing for a series with the Cardinals this week. Which means someone from St. Louis will proceed to dominate the Dodgers like they're The MLB Stud Of The Year and two years later you'll wonder what happened to them (see: Wacha, Matt Adams). 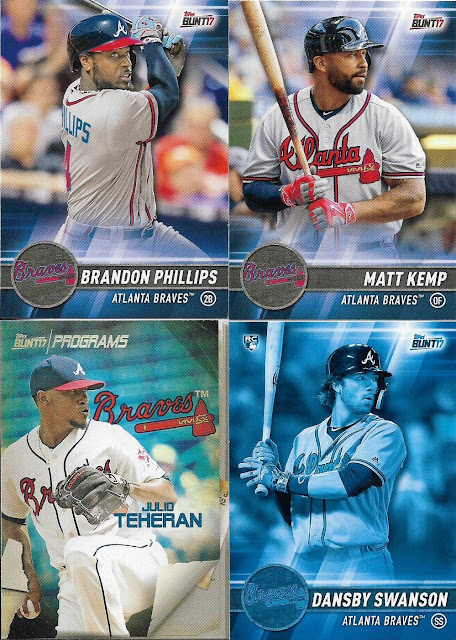 I bet I could sell that Dansby Swanson parallel for $5 this instant. 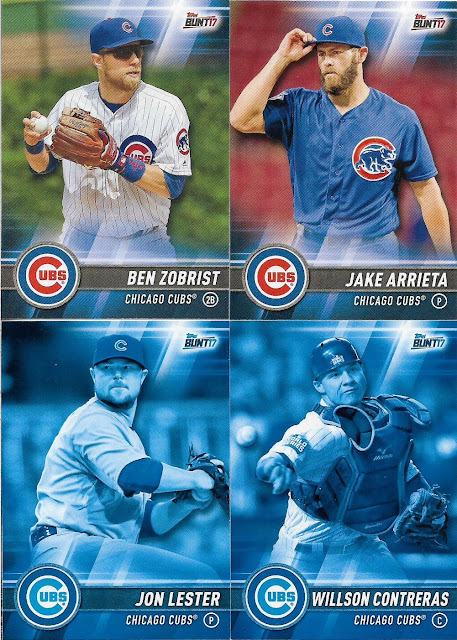 Just don't have much left to say about the Cubs. 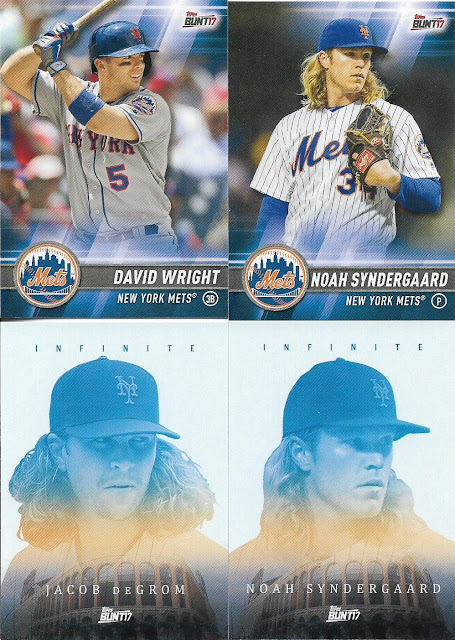 Those Infinite cards really aren't working for me. It's getting to the point where I feel the need to get rid of them.

I hear the Rangers are good. I guess I should pay attention to them.

Because I was a glutton for punishment, I watched the Giants-Cardinals game Sunday on the MLB Network, which was carrying the Giants' feed. I don't like the broadcasting of Duane Kuiper and Mike Krukow for obvious reasons. They're wildly popular in San Francisco, which makes sense because that's the same crowd that was rooting for Barry Bonds. Anyway, on Sunday, Krukow wasn't there. It was Kuiper and Jeremy Affeldt. And the whole time, while the Cardinals were beating the Giants' brains in, the two acted like the Giants were actually still good. ("Giants play the Cubs next, that will be some series!" Yeah, or the Cubs could very well sweep them). And just to reassure themselves, they babbled about recent Giants World Series teams, as if it was relevant to anything going on on the field. Broadcasting sycophants are very annoying.

The A's cards sure look pretty in this set. Not as pretty as the Kershaw green parallel though.

At work, I am forced to have discussions on what Masahiro Tanaka's mound issues are. I couldn't care less what his issues are. Personally, I'd like him to give up four home runs every inning. Maybe I'll work that into the next "oh what's wrong with these Yankees" conversation that comes up.

You can see that the Splatter Art card is numbered to 99. It's not very fancy for such a low serial number card. But there's also a Bunt code on the back that probably nets you some sort of rare digital image. It's lost on me though. 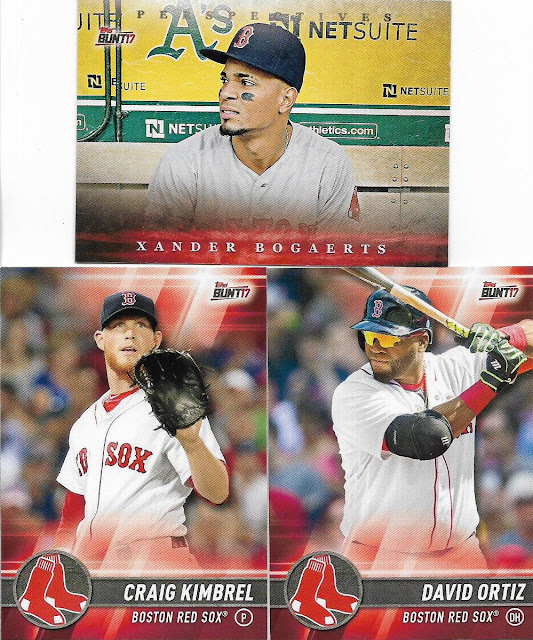 The Bogaerts Perspectives card looks more like an A's card than a Red Sox card. 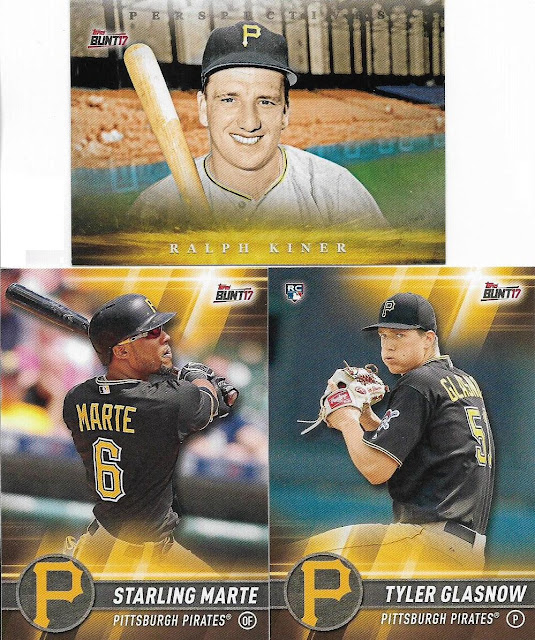 The Rockies have not been well-represented in the Blaster Power Rankings so far, which doesn't jibe with my habit of constantly pulling Rockies. Also, this team needs to stop winning. 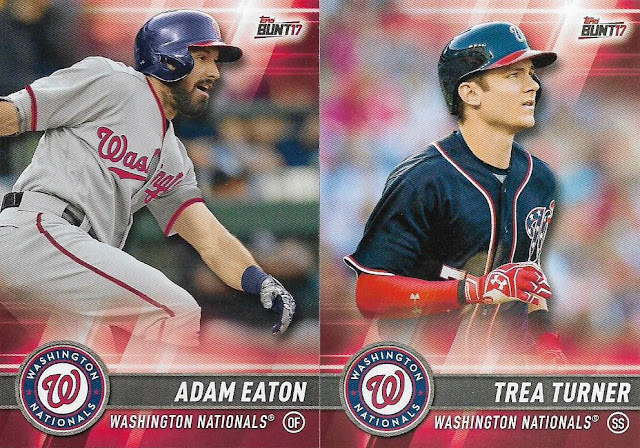 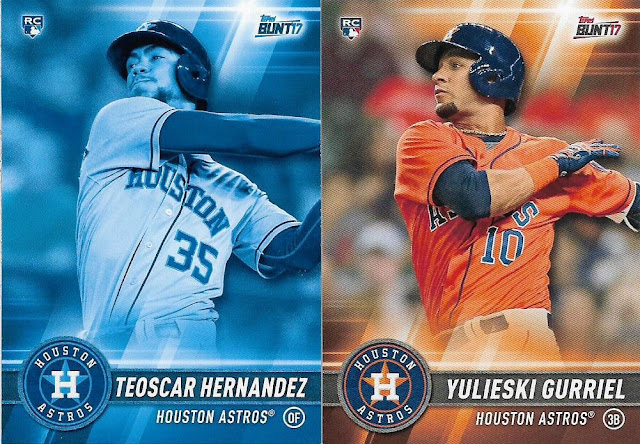 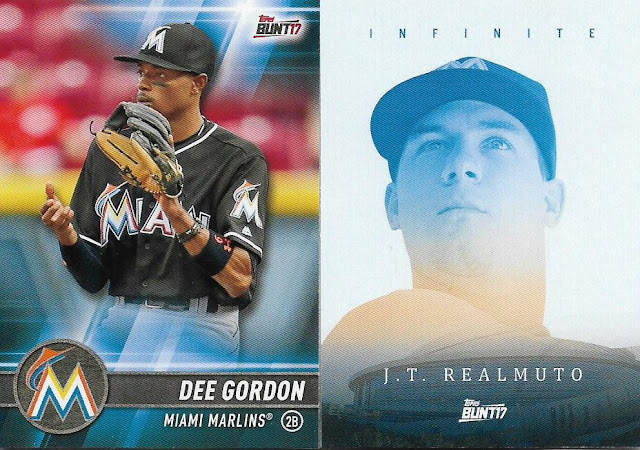 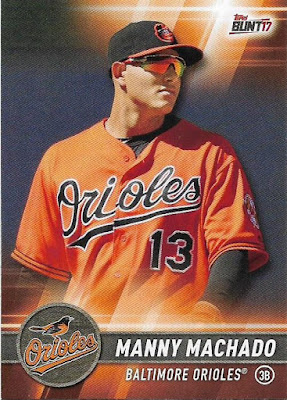 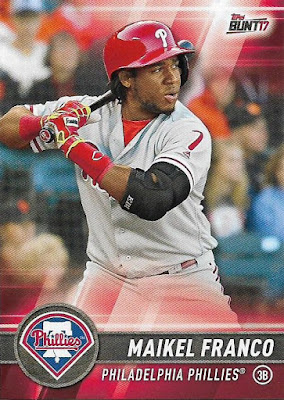 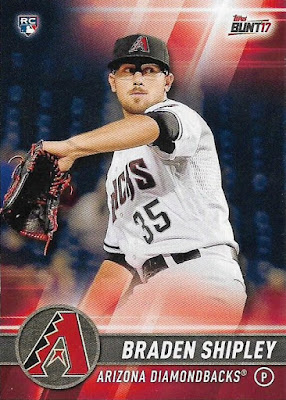 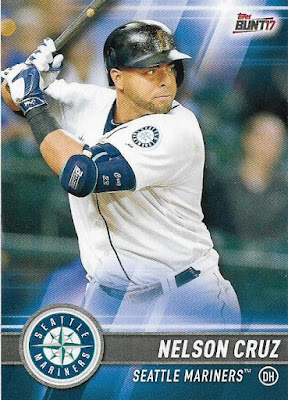 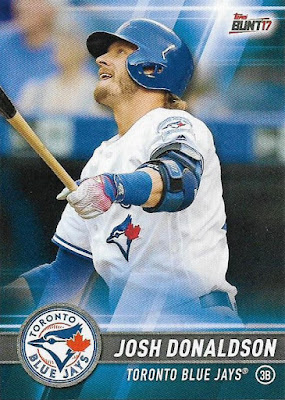 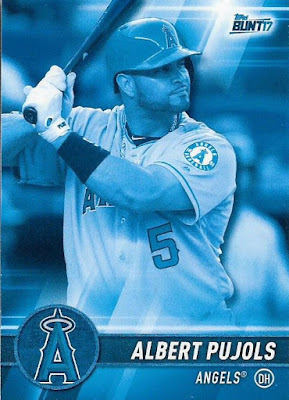 After two Bunt blasters I've yet to pull any cards for the Brewers, Padres or Rays, which -- apologies to the couple of Brewers bloggers -- means that Topps is finally listening to our pleas to not make cards of teams that nobody collects! (This is a joke, but I really wish it was true).

These posts are written mostly to amuse me, but also I'm interested to see which teams I actually do pull most often (instead of merely suspecting it) within a given year.

So here are the updated Blaster Power Rankings:

The Dodgers make their move! Yay!

I know it's very early in the rankings, but I'm surprised that some teams are so low. The Indians were in the World Series last year, you guys! Also, the Orioles are pretty darn good.

So there you are. Now -- for sure this time -- there won't be another of these posts until probably early June, or whenever I decide to buy some Archives.

Or, who knows, maybe I'll lose a few more brain cells and you'll suddenly see a blaster of Bowman on here.

The Angels In Order said…
This is EXACTLY why I don't buy blasters hoping to pull Angels. They never fail to frustrate me.
May 22, 2017 at 9:39 PM

Zippy Zappy said…
If you need somewhere to send the Gurriel I'm open.

The White Sox are in an interesting position now where they have a pretty good farm system (after huge trades involving Adam Eaton and Chris Sale), and just enough talent to be relevant again in 2-3 years. Of course they'll screw up in the process, but there is life in the minor leagues.
May 22, 2017 at 10:08 PM

Fuji said…
Lol. Surprise... surprise. The Padres are at the bottom of everyone's power rankings even when they involve cards and not player performance.
May 22, 2017 at 11:23 PM

Commishbob said…
1) If you're not putting this set together there are a couple I could use for my FBB binder....Gurriel/Franco/Eaton/Lucroy

BobWalkthePlank said…
Love the Kiner! Now if we can just get a couple more above average cheap sets we will be set.
May 23, 2017 at 9:12 AM