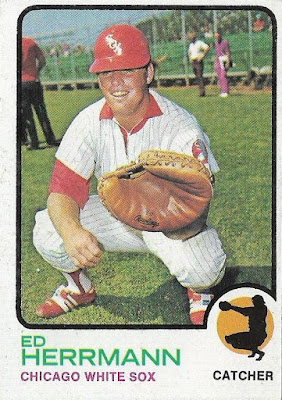 I hope you don't mind seeing an overload of 1973 Topps over the next few days.

Wait -- was that a groan? Do you have some sort of problem with backgrounds featuring men wearing purple leisure suits?

I didn't think so.

As soon as I announced that I was trying to complete the '73 set, packages started arriving at the door. I have two or three more of them to show, but none of them are as significant as this one. This one package was set by Mark of My Best Friend Collects Chipper Jones. He apparently has completed that set and had, oh, just a few leftovers sitting around in a shoebox.

"Take what you need and send the rest back," he said in a note that accompanied 200 or so '73 Topps!

OK, then. I've taken my needs and it amounts to around 160 (how's that for an excellent percentage?). I'll be sending the rest back hopefully this week or early next week. I really cannot get to the sending portion of this hobby lately.

There were so many cards that I needed that I have to separate them into sections for easy reader digestion.

Let's start with the cards that I previously owned in my collection: 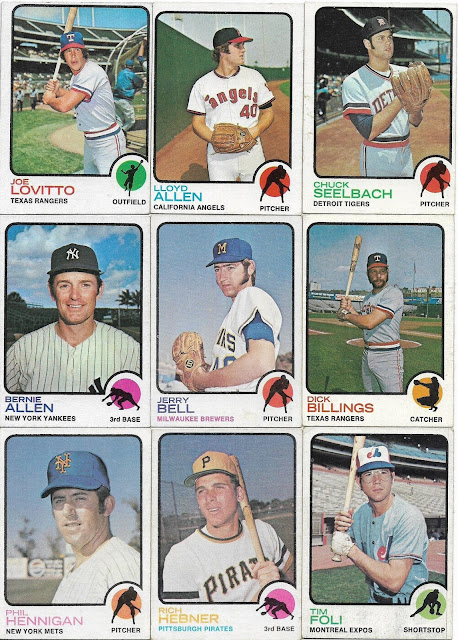 Yes, that's right. There's even more of them that I didn't scan. This is how long I've been doing this blogging thing. There was once a point during the life of this blog that I didn't even consider collecting this set and, heck, let's give these cards to people who are crazy enough to do so!

Now I  have them back and I won't make the same mistake twice. 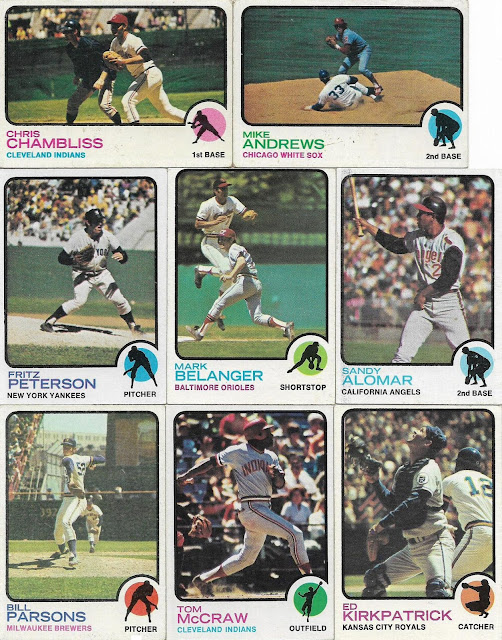 Here is some of that crazy action that we all love from '73 Topps. American League pitchers running the bases in jackets, Sandy Alomar adjusting "himself," what appears to be a giant beer mug in the background of the Parsons card. Good stuff.

The blue C on these Indians hats never looked right to me, as if someone colored in the C. 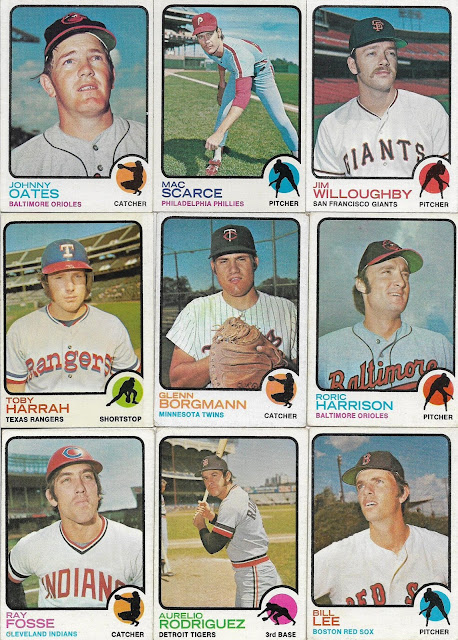 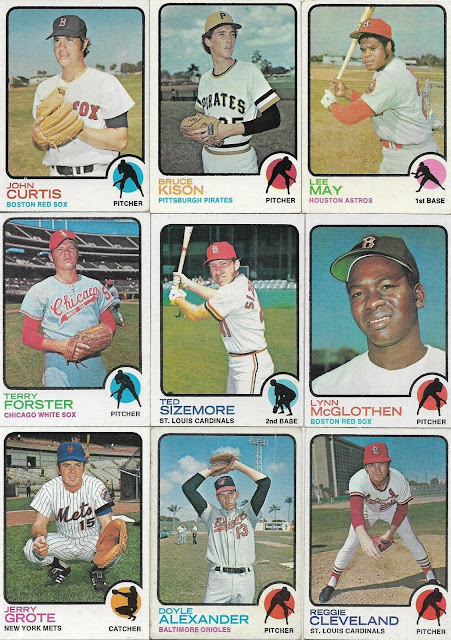 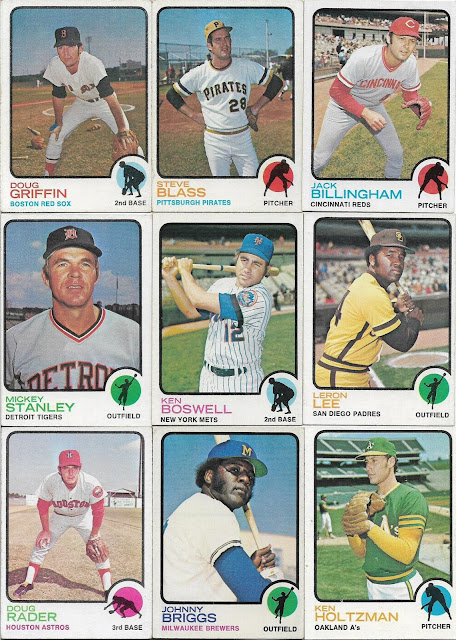 All of these feature players that I would come to know from cards of them issued later in the '70s. Most from 1975 Topps. 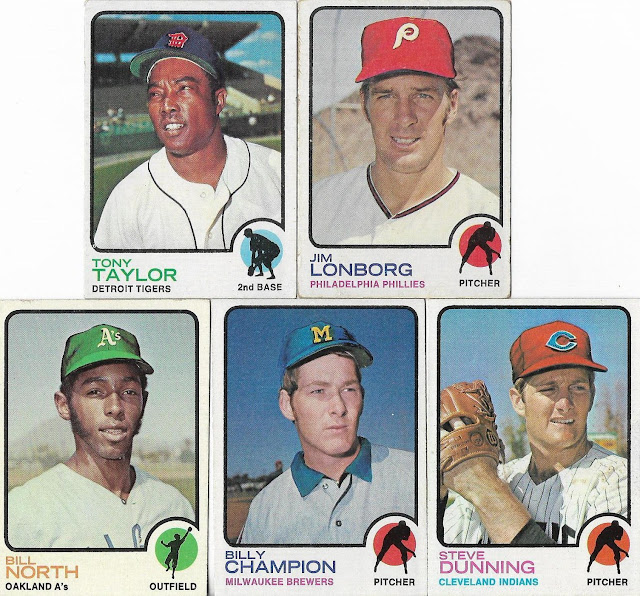 The beauty of 1970s airbrushing. 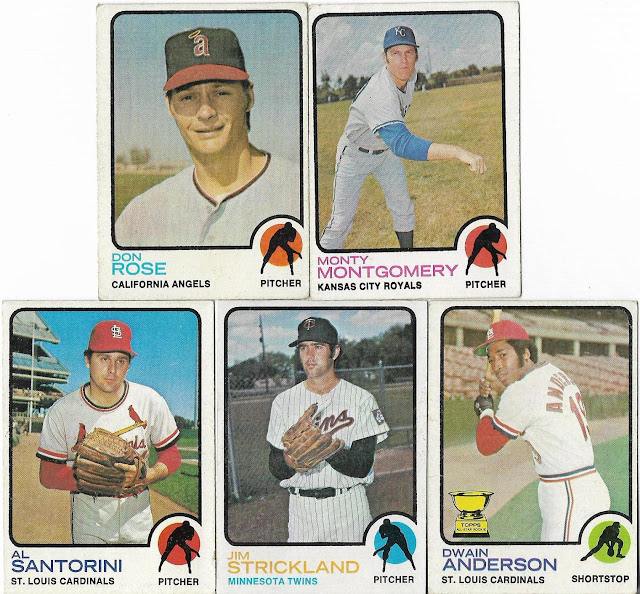 Any early '70s set produces players that I never knew. It's very interesting to me how I would arrive on the baseball scene in the mid-1970s and all of these guys had already vanished.

But that's what makes set-collecting so great. I can now get to know these fellows. 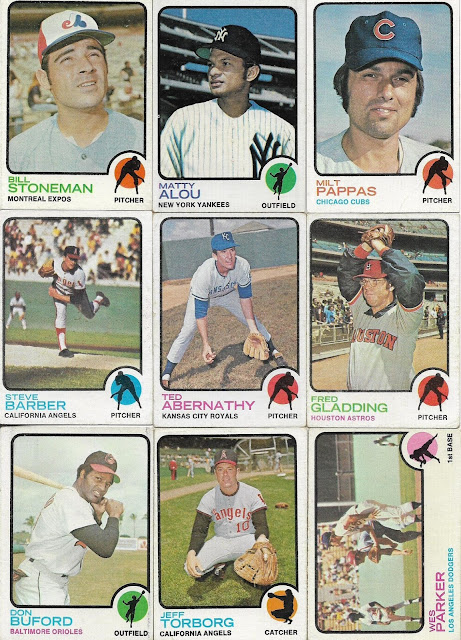 Here are some guys that I know more from their '60s cards. The 1973 set marks that key moment when many of the stars of the previous two decades were departing. I think the same holds true for other years ending in three -- 1983, 1993. I'll have to make that a future post. 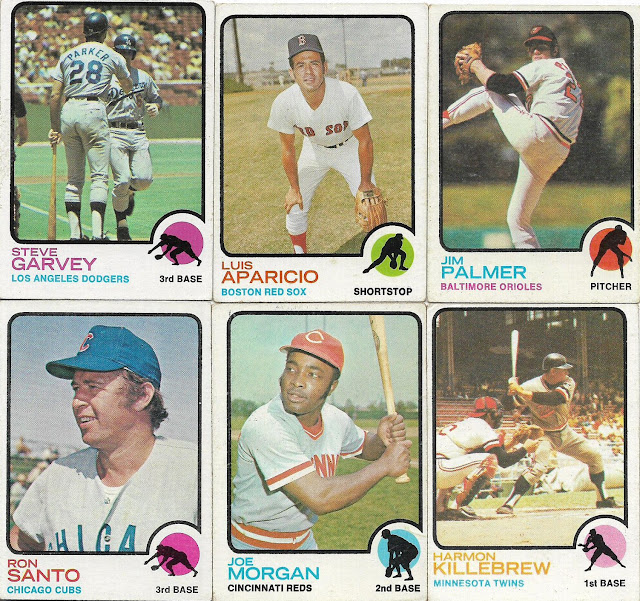 Mark did not hold back on the stars. There was also dudes I didn't scan, like Tony Oliva, Wilbur Wood, Jerry Koosman and Jon Matlack.

And while I was happily thumbing through the package for the first time, about two-thirds of the way through I found this card: 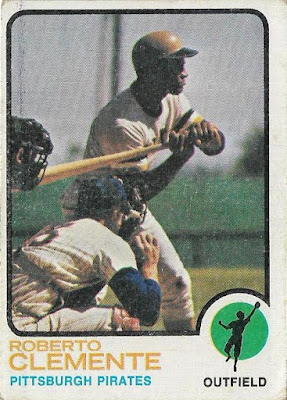 What a relief to not have to scrounge around for Clemente's final card! I can now focus on Mays or Ryan.

Of course, I cannot show '73s and skip over one of my favorite aspects of the entire set.

The '73 cartoons will come up again in a future post. They're really tough to top.

There were many other cards not shown here, league leaders, postseason cards, even a few checklists. It means that I probably need to find a binder for this set sooner than I had planned.

So that's another look at the greatness of '73.

You may now return to your very boring, non-purple leisure suit, present-day lives.

Nick said…
If the day ever comes when I decide to build a set, this may just be the one I chase. The Clemente is my favorite '73 (and my all-time favorite baseball card period), though I'd have to give the #2 slot to Mr. Killebrew. Killer has a lot of great cards, but that one's always been at the top of my list of his.
May 16, 2017 at 11:54 PM

ned said…
mr.owl the 1973's are the first set i really collected cannot look at them without being transported back ...which is what its all about ..the Clemente card was huge in my 10 year old mind it was like seeing a ghost! was in maryland during the 70s so the Orioles were key..great post can still smell the gum!

Teresa Whitesel Navarro said…
No groans here. This is also the first set I collected and I love this set. I concur with ned's comment about the Clemente card. It's always amazing how that card transports me back to when I was 9 years old in Oakland. Good time were had collecting these cards.
May 17, 2017 at 10:49 PM