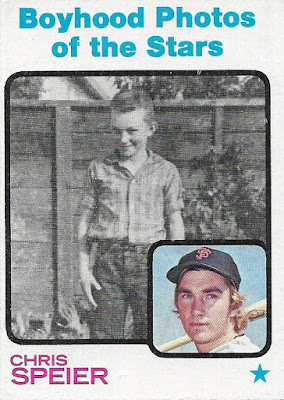 You ever play that game in which you calculate how many years it's been since you were a kid and then take that total and subtract it from one of those years when you were a kid and come up with a difference that causes you to instantly turn off all the lights in your house and hide in a dark corner of your room?

Yeah, that's not a fun game to play when you start to hit a certain age.

The only time when this exercise is fun is when it comes to cards. I am combining two recent packages that I received because each of them feature 1973 Topps (I can't have every post being '73s, as wonderful as they are). The '73s were central to the package. But with 1973 at the center, each package contained a card from either side of the spectrum -- 40 or so years after 1973 and 40 or so years before 1973.

One of the packages arrived from David, who's down in Texas. He's sent me lots of nice cards. These fit right in with that. 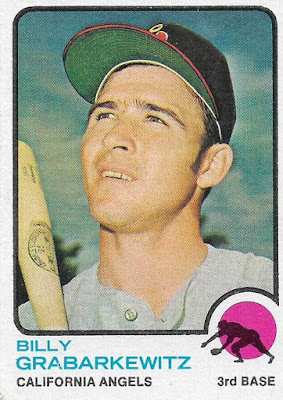 This is the first 1973 Topps card I ever owned. I'm pretty sure I had it because Grabarkewitz is actually wearing a Dodgers uniform. But I fought the temptation to recolor his hat Dodger blue. 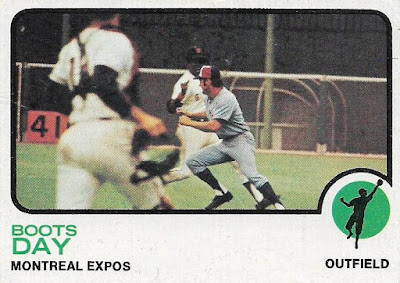 Boots tries to avoid getting the boot on the bases. Boots Day grew up in Upstate New York. I am enormously proud of this. 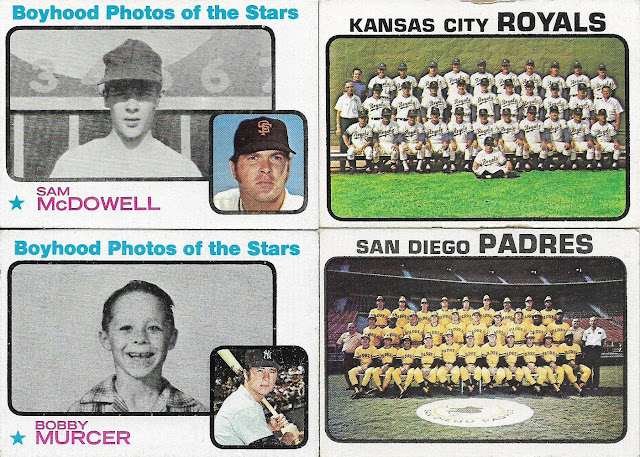 A few horizontals. It's difficult to say what the star of the show is here. If you put young Bobby in a '70s Padres uniform, you'd have a definite winner. 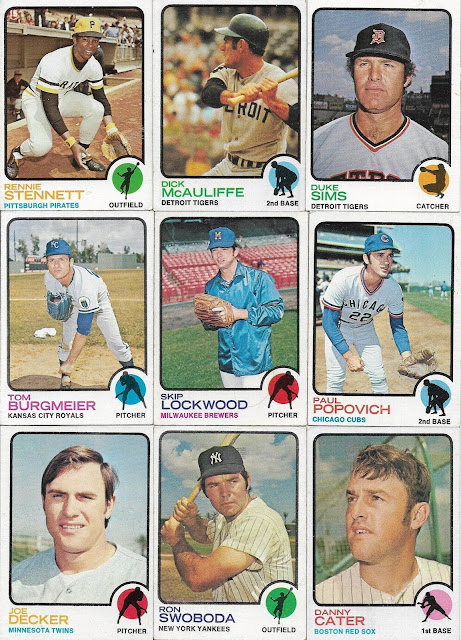 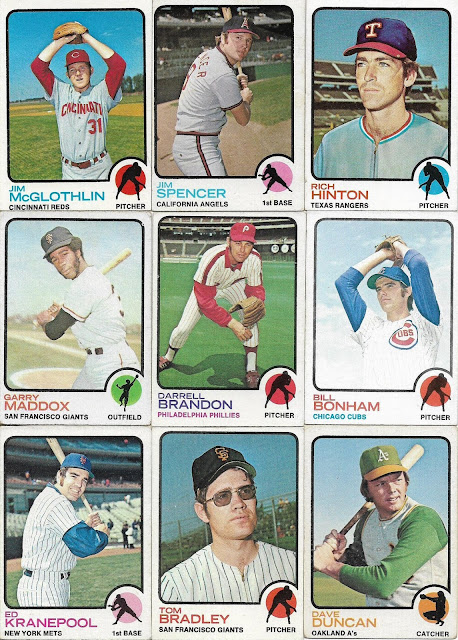 How about a bunch more? I think I'm at a record number of cards I need to catalog with all these '73s lately. But I'm certainly not complaining. 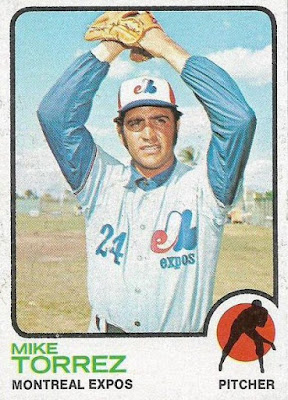 Dave also sent along this Mike Torrez card and astutely pointed out it may have one of the most unflattering cartoons accompanying it ever. 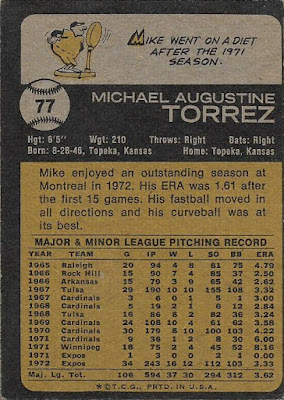 Why don't we just put a big sign on the back that says "MIKE WAS FAT"? 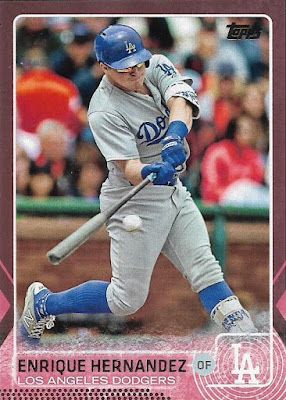 Then there was this card that Dave sent, which doesn't match with anything else in the package. However it is much appreciated and gives anyone from 1973 time-traveling 40 years into the future an idea of what card now look like. Lots and lots of PINK.

As for the other package, that one came from Mark Hoyle.

I have to say that with all the '73s I've received lately poor Mark didn't stand a chance!

The above three were the only ones that weren't covered by other packages.

But no matter because that's 3 off the want list, and Mark isn't the type to hit you with just cards from a single year. Or even just cards. 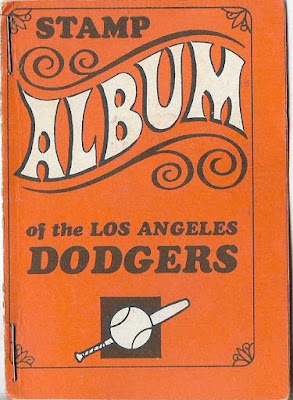 How about a 1969 Topps stamp album of the Los Angeles Dodgers, for instance?

Doesn't that just scream 1960s? Has that font been used again since the '60s? 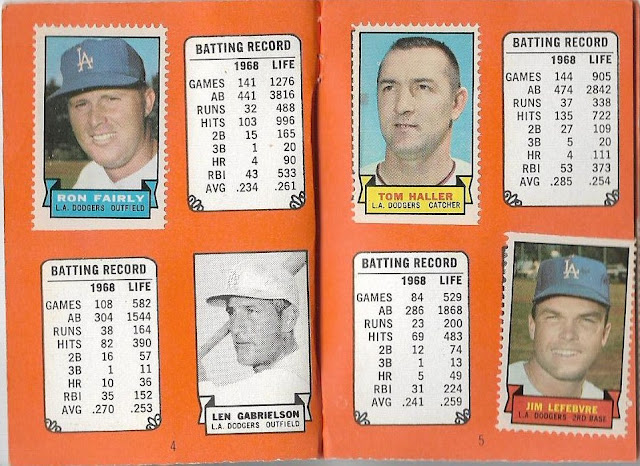 As you can see, someone did my stamping for me. The only stamps that aren't already placed in here are Len Gabrielson and Bill Singer.

All right, if you've been reading along and not just looking at the pictures, you know that I still need to show a card that is around 40 years older than a 1973 Topps card.

I wouldn't let you down. And neither would Mark. 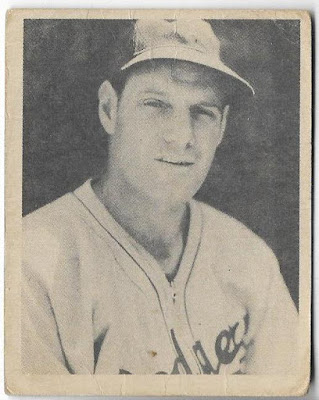 That is a 1939 Play Ball card of Leo "The Lip," the player-manager for the Brooklyn Dodgers at the time. He looks like he's about to chew all of us out.

This is my first card of Leo Durocher from his Brooklyn days that isn't some sort of retro thing.

Mark has been distributing these Play Ball's to various collectors lately and I'm sure glad I'm one of them who received one.

Because I appreciate all eras of baseball cards even if I like that 1970s era better than others.

Just don't remind me how long ago that was.

Mark Hoyle said…
I knew I didn't stand a chance when I saw the other cards pouring in. I predict you finish set by summers end. Was hoping you didn't have Stamp album.
May 19, 2017 at 4:47 AM

Fuji said…
I thought I was the only guy in the world who did the whole "date" thing. I'm always doing that with my students and their birth years. Right now, most of my students were born in 2004... which is 13 years ago. Thirteen years earlier and I was already in college. :(
May 19, 2017 at 5:24 PM