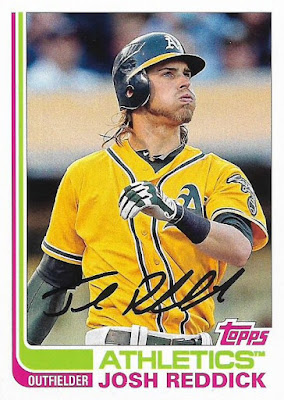 I decided to read up on the next Topps set to hit card aisles this season. It's the annual Archives issue and it's scheduled to be released a week from today.

I've mentioned everything that distresses me about Archives so many times that I feel like I'm parodying myself. Even though it seems like this product is targeted toward me, I don't think I'm meant for this product. It's just too irksome. I should walk away and let it go.

But just one more thing.

I naturally wanted to see which past designs were going to be featured in the base set this year (I probably knew this information once before but my brain is full and facts and memories leak out all the time).

Like the previous two years, Topps is featuring only three past designs after featuring four the first three years of the Archives reboot. Here are the three designs for 2017:

Two of those designs are all right. One is definitely not. And the one that is not is freaking 1982 again.

Topps just featured the 1982 Archives design in 2013! I think Topps' memory is worse than mine! Seriously, guys, my junior year in high school is not worth rehashing more than once.

Here is the breakdown of the years featured in each set of Archives:

We're just six years into this product and two of the designs have been used twice already despite 60-plus years of designs.

As a set collector, one of the things that I most enjoy about collecting sets each year is that they are distinct from one another. There is no way in the world you could confuse 2015 Topps flagship with 2016 Topps flagship. This was almost always an advantage for Topps back when it was competing with other card companies, particularly Upper Deck.

I realize it's difficult to make Archives distinct with the mish-mash of well-known designs, but, geez, repeating the same design two to four years later certainly isn't helping.

The 2013 Archives Josh Reddick night card will be headed to the night card binder, just so I can ensure that I don't confuse it with any 2017 Archives '82s that might work their way into my collection. 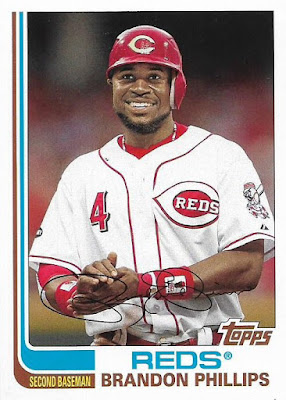 It's very easy to confuse the old night owl these days. I need to take every precaution possible.

Anonymous said…
I can see some sets like 1978, which would be harder to replicate for newer teams, being skipped... But I'm honestly surprised that they've never done 1981. It's not that I love the set, but it's a fairly simple design and is relatively popular. It certainly falls into the category of "Why Not?"
May 24, 2017 at 10:13 PM

Nick said…
I really don't get Topps's obsession with the '82 design. It's never been one of my favorites and I'm not looking forward to seeing it again in Archives this year (although I do love the choice to honor '92 Topps). I'm still waiting to see '81 pop up in Archives one of these days.
May 24, 2017 at 10:44 PM

Commishbob said…
I liked the '82 set...in '82. But I'm with you on this...we've seen enough of it in these throwback sets. It's odd that this year is the first appearance of a 1960s design. Are they avoiding it because they are running through those years with Heritage?
May 25, 2017 at 8:06 AM

ned said…
I am so sick of ersatz cards ..it was cool when baseball cards magazine did it in the 80's Topps is as lame as hollywood.. endless regurgitation..what a shame that its come to this

EddieK said…
Does Topps ever explain the rationale behind which designs they select?
May 25, 2017 at 9:32 PM

acrackedbat said…
Dropping the fourth design is also an irritation. Perhaps Topps thought they'd go through all available years too quickly. Obviously this is NOT a problem. 2017 marks the third year I have not purchased Archives but do appreciate receiving these in trades.
May 26, 2017 at 8:09 PM