The most important cards of the day 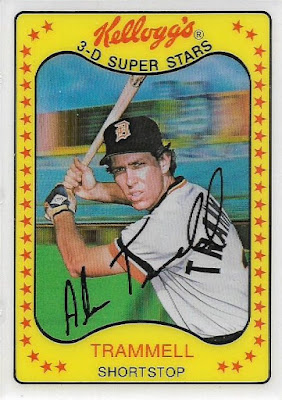 I don't do breakfast.

I usually rouse myself out of my tree hole around 11 a.m. (although it's been a lot earlier lately for a variety of inconvenient reasons). By the time I'm ready for food, everyone else is at lunch. And because I consider lunch food infinitely more desirable than breakfast food, I simply slide into lunch with everyone else.

Breakfast rarely exists in my world.

This, no doubt, is heartbreaking news to whoever came up with the slogan, "breakfast is the most important meal of the day." They have no shot at shoving burnt toast and scalding coffee down my throat. The Eggo and Jimmy Dean people are powerless over me.

I sound pretty smug about that, but I admit, this would be a tragedy if people were still putting baseball cards in and on cereal boxes. I'd have to eat cereal for lunch, I guess. Which would be quite the sacrifice because, boy, do I ever love sandwiches. 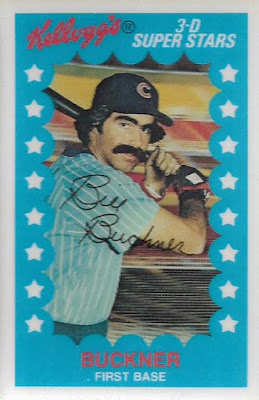 As I hope you know, these are my all-time favorite oddballs. Apparently they are others' all-time favorites, too, because I rarely receive them in the mail, and I don't see them much at card shows either. So I am very happy about these particular cards.

The Billy Buck card is from the 1982 Kellogg's set. This was long past my childhood fascination for grabbing the one card inside the cereal box. I'm not nearly as enamored with the '80s Kellogg's cards as the '70s. But kudos to 1982 for looking very much like the familiar blue-bordered '70s Kellogg's cards that spark so much nostalgia. 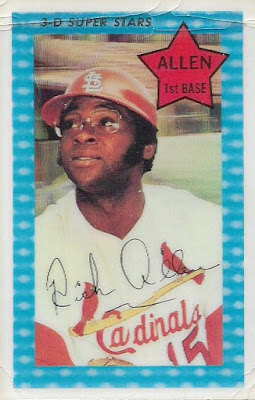 How cool is a 3-D card of Dick Allen in a bonafide Cardinals uniform? Topps never showed Allen in a Cardinals uniform, preferring instead to list him with the Cardinals in the 1970 set but hide the fact that he was really wearing a Phillies uniform. By 1971, Allen was off to the Dodgers and then the White Sox. His Cardinals days long forgotten.

I enjoy my Kellogg's cards as uncracked as possible. But I will make so many exceptions for this card. 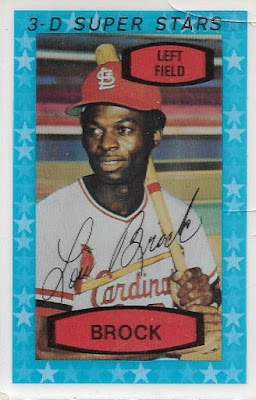 More Cardinals' ever-so-slightly-cracked greatness. While the Allen card is from 1971, this is four years later and Lou Brock's Kellogg's card immediately after he set the season stolen base record with 118. This would have been one of the best possible cards to pull out of a box of Frosted Flakes in 1975, especially because Hank Aaron didn't make the set. 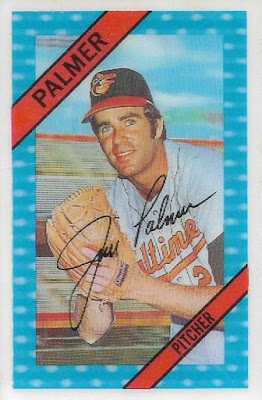 Here is Jim Palmer posing between the twin '72 slashes. Sorry, '72 Kellogg's, this is one design where you didn't have it all over Topps. I never understood the odd slanted ribbons on these cards. But give me a minute to drink in the 3-D action and I'll forget. 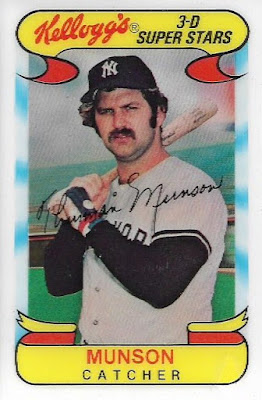 Here we go! The Kellogg's cards from 1977 and 1978 (this Munson is from '78) are my sweet spot. Those are the years when I brushed the most cereal flakes from my elbows reaching for those cards. I really didn't like Munson at this time -- and if I did pull it then, I probably would have scammed a Yankee fan for 10 cards in return for scowling Thurm. 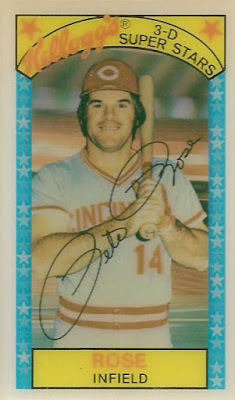 We're exiting the '70s with this one. This is a '79 Kellogg's card of Pete Rose. Please note the "infield" designation on the card. Rose had already moved on to Philadelphia by the time this card appeared in boxes. There is a Phillies logo on the back as well as mention of Rose's transition.

Here is something I've never seen in person before: 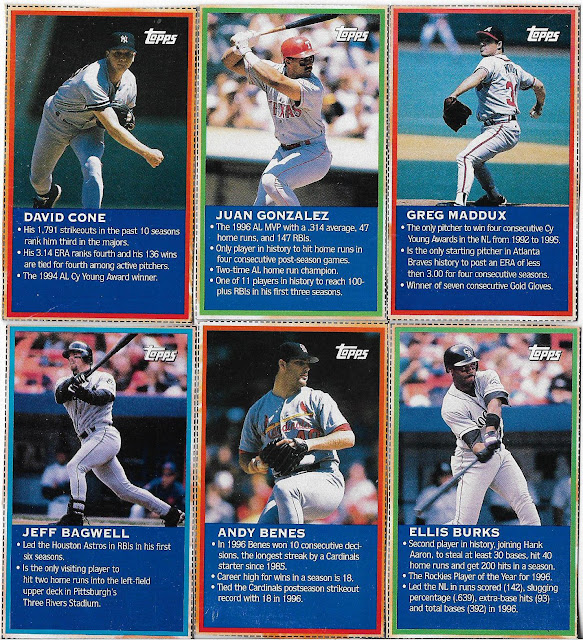 These are 1997 Wheaties cards, which were issued on Wheaties boxes. Please note the fairly expert cutting on these cards. 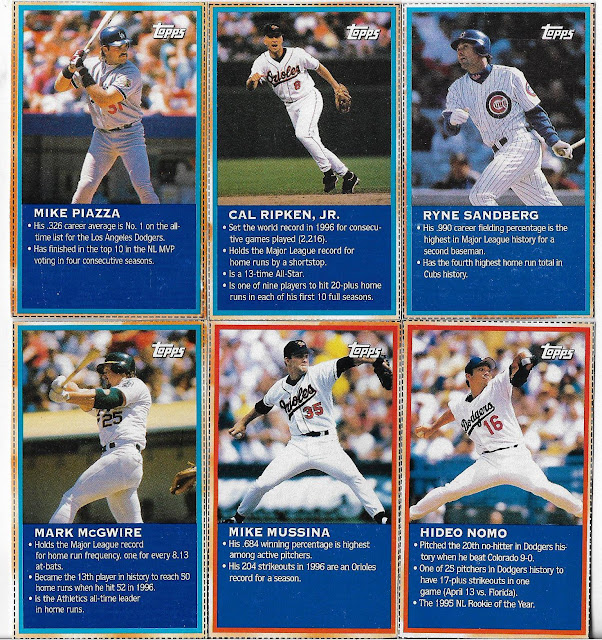 I particularly appreciate the Piazza and Nomo cards. The dimensions are a bit odd for page storing (too tall and too narrow). But I will let that pass because I'm viewing these for the first time! 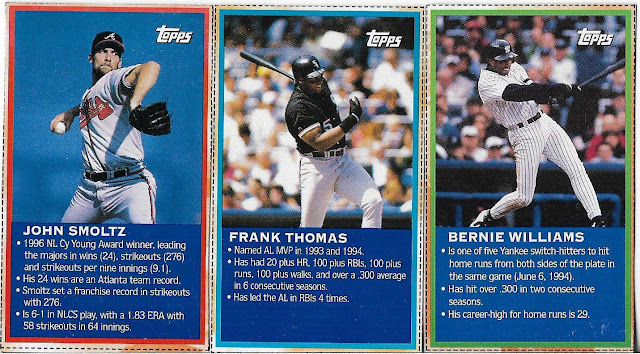 There is another breakfast slogan that is sort of a spin-off of the "most important meal of the day" line.

That was a particularly bossy way to guilt you into consuming their tasteless soggy leaves each morning in hopes you would become the next Olympic athlete -- or in 1997, the next baseball All-Star.

But I'm wise to all those breakfast sayings.

I don't eat Wheaties, but I have Wheaties cards.

I don't eat Frosted Flakes, but I have my precious 3-D Kellogg's cards.

You have to get up pretty early in the morning to sucker the night owl.

Brian said…
I just read (scrolled past the headline) in the NY Times that studies have shown that breakfast is no more important than the other meals.
Boxes of cereal that contain cards, on the other hand, are the most important boxes in the grocery store.
May 24, 2016 at 8:09 AM

Adam said…
I'm with you on this. I personally wouldn't eat breakfast if I didn't have to. I don't mind a bagel or biscuits every now and then or the occasional Sunday breakfast out, but aside from that I'm good.

That being said, that is an incredible batch of Kellogg's cards. Those Wheaties cards are intriguing too.
May 24, 2016 at 3:04 PM

Anonymous said…
Here's a funny contrast... Unlike everyone who has never seen the Wheaties cards before, I have three of them that I cut out of the box 19 years ago... But when I recently ran across them in a box, I couldn't remember what they were. Now I know they're Wheaties cards, so thanks for refreshing my memory.