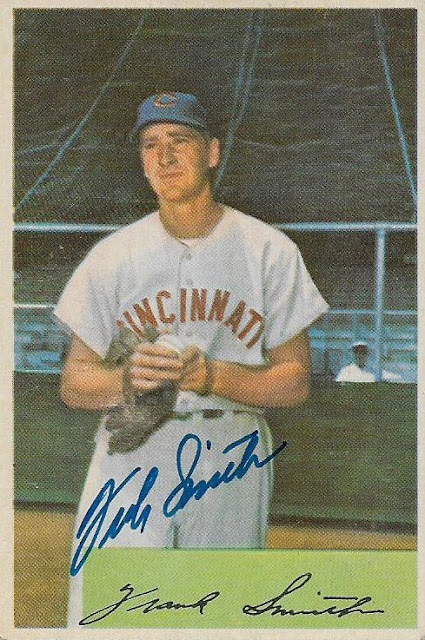 I've got to stop coming up with cryptic blog titles like this. I'm not going anywhere ... yet.

No, this has to do with with my sportswriting assignment last weekend. I don't know how much it will interest collectors, but it's basically all I'm thinking about right now, and that's why this blog exists. I promise my story will drift into baseball cards.

If you've been following the blog since the beginning, you know my relationship with Frank Smith, a relief pitcher from the 1950s who played mostly for the Reds and a year for the Cardinals. I've linked the original blog post on him so many times that I feel stupid doing it again. You can search for it easy enough.

I did a very large story on Smith 14 years ago. He died from leukemia 11 years ago. He was a bigger-than-life character of the game who virtually nobody knows. But I found over the weekend people who do know him.

I talked to lifelong friends of Smith and met all four of his children. The tiny high school from which he graduated decided to finally dedicate the baseball field to Smith and put his name on a brand new scoreboard. For a school that size, they did it up right and I was surprised by how many people showed up and remembered the colorful Smith.

Here is the plaque that now hangs from the baseball field backstop: 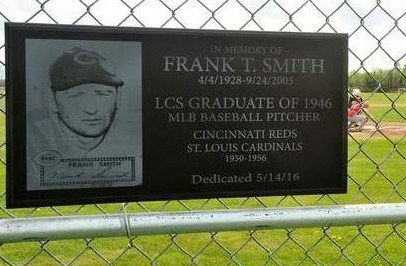 You can see that Smith's 1952 Topps baseball card -- his rookie card -- was used for the plaque. 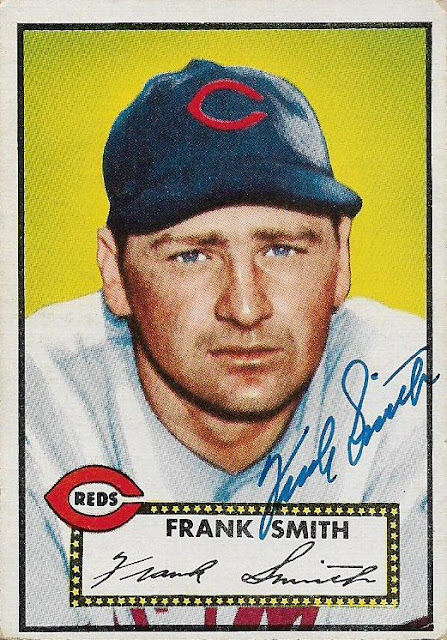 I have a signed copy of that card, thanks to one of Smith's many buddies, who is named Norm. He wasn't at the field dedication. I don't really know where he is anymore.

I got a great kick out of seeing all the people who remembered Smith and hearing all the stories about him. He was a character from the beginning, betting his school classmates that he could stick his foot up on the wall higher than anyone, and then while his classmates all struggled to put their foot on the wall, Smith walked up a flight of stairs and put his foot on the wall.

Frank Smith's oldest son, also named Frank, told me about how he and his brother shagged flies in the outfield at the tail end of their father's career while Smith pitched to the Reds' Ted Kluszewski, who was on a rehab assignment. Frank the son remembers watching the balls hit by Big Klu soar far over his head.

Another of Frank's sons, Dane, said he remembers sitting in the dugout as a 7-year-old at Crosley Field when his dad said he wanted his son to meet "this new guy." Frank Robinson came over and said to Frank's son, "nice to meet you."

A family friend of Smith's -- there is this one large family that remembers Smith coming over to the house during the offseason and hanging out for "breakfast, lunch and dinner" -- talked about a photo that appeared in Life magazine in 1952 in which Smith is posing with Stan Musial. Smith had just lost to Musial and the Cardinals and Smith is shown with towels tied together around his neck as if he's hanging himself.

I wish I could find that photo, no doubt in Smith's large scrapbook that he left behind, but it's difficult to find photos of lesser-known players from that era.

In the school lobby was a display of Smith memorabilia. I made sure to take a picture: 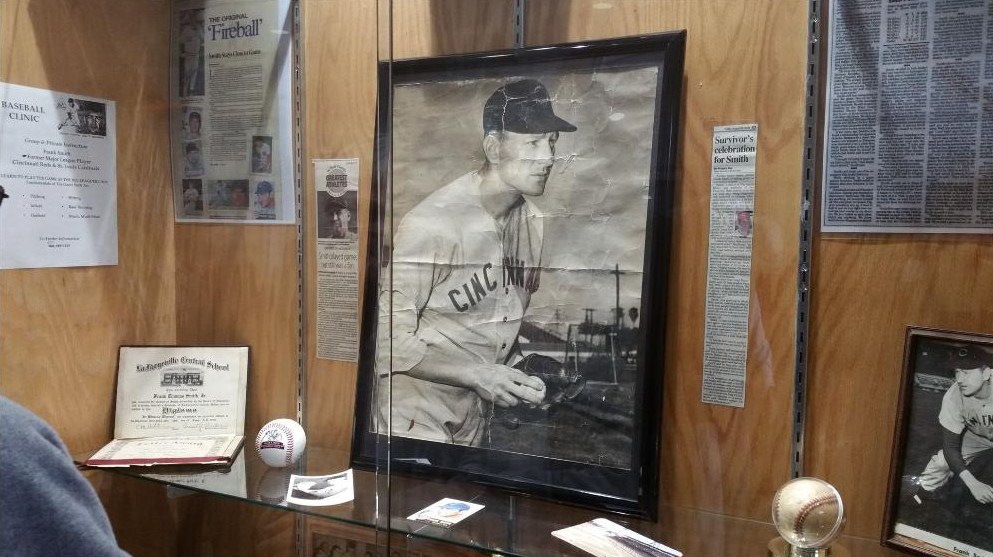 You can see a large photo of Smith from his playing days.

The articles hanging up around the photo were all written by me. That is so cool. It's not cool because I think I'm a big shot (OK, maybe it does help the ego), but it's cool because this is why I became a writer. I want to tell stories about people who should be known. I want others to know their stories.

Smith is considered by some to be a pioneer of the current closer. I was told at the dedication that the Yankees and the Reds were the first teams to use relief pitchers similar to the way closers are used. And Smith was part of that, finishing in the top five in appearances a couple times.

The story hanging up in the top left corner was the large story that I wrote the first time, which really helped local people know about this major league pitcher who grew up on a farm, came from their backyard and had been ignored for decades.

This is the article that I saved. It was displayed so large that I can't fit it on the scanner, but you'll get the idea: 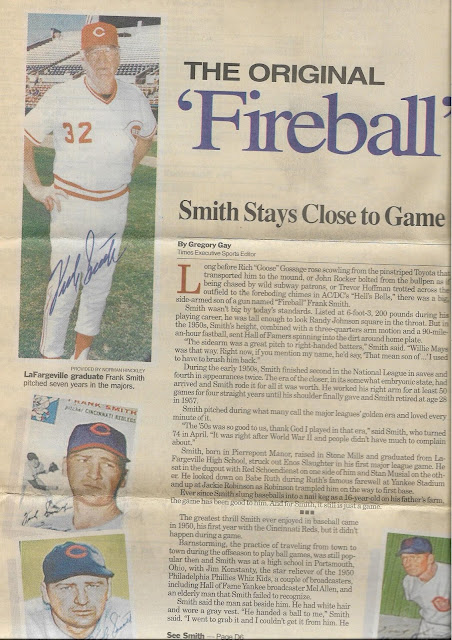 Smith's daughter Gail, when she found out that I had written this article, told me how much she liked it and how she went down to Kinkos and made copies for everyone. I was happy to hear her single out the baseball cards and how much she liked them displayed with the story.

Those baseball cards were supplied for the story by Norm and then I returned them to him. When Frank died, Norm gave me most of the cards. I noticed that he kept at least two of them that were displayed. One is the 1954 Topps card on the left there. 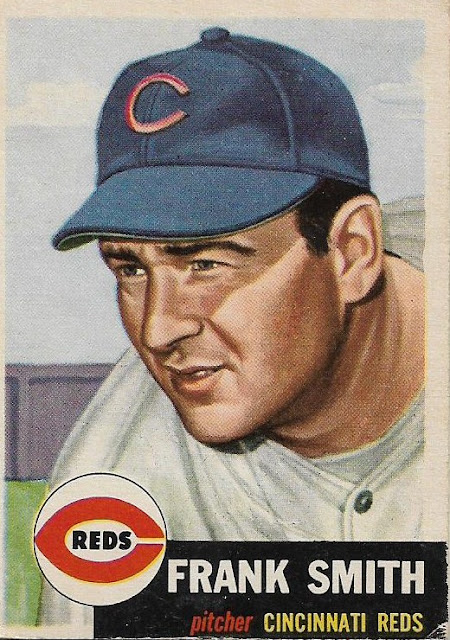 The other is this card, which I received in a trade with a fellow blogger (remember Doc T?) a number of years ago. Norm's copy was signed. I don't know why he kept those two. Perhaps they reminded him the most of Smith? I like to think they meant the most to him.

As much as I love baseball, it was a great day. The local high school team played a game after the festivities, and one of the sons threw out the first pitch. And I realized, after hearing story after story about Smith, that my two-hour conversation with Smith when I wrote that first article did not come about because I was a reporter particularly adept at asking questions. It was basically how he treated everyone. He loved baseball and he loved to talk and to have fun. He was the life of the party.

I've talked to the family so much that I know a lot about their history, the stories that don't have to do with baseball, family stories, at least one of which would make a great article on its own.

And when Smith was alive, I was able to talk to him enough over the phone and gather enough background that I felt like he came over to visit from time to time. In fact, a couple of times when talking to his kids, I would bring something up about their father and they would pause and say, "wait, you knew my dad?"

After I came back to the office, I realized that this was a story about the memory of someone and we didn't have a picture of the guy. There were no current photos and no access to that Life magazine photo. So I made sure to stop home and grab the 1953 Topps card above of Smith and include it with the photos with the article.

This felt like the last time I would write about Smith for the paper. The final chapter referenced in the post title. But in talking to his son, he mentioned a story that Frank told me about Jackie Robinson and he's trying to do some research to pinpoint the exact game and background. I wouldn't be surprised if it turned into some sort of short film or book. And then, I'd be writing about Smith again. 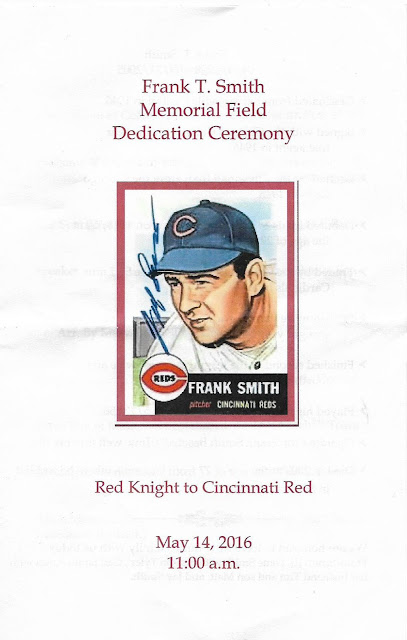 So that's what I did on Saturday. It may not mean much to some people, but I know it meant a lot to the Smith family. And it was the coolest thing I've done in a long time.

deal said…
Very nice. I really enjoy reading these stories about players I never or barely knew of, especially when they turn out to be real decent people.
May 17, 2016 at 8:52 PM

night owl said…
It's possible. The date and details don't exactly correspond to story the guy was telling, but memories can get mixed up.
May 17, 2016 at 9:53 PM

Billy Kingsley said…
Great post. One of my favorites on this blog, actually. Documenting pretty much everything- and making sure no one is forgotten to history- is a big deal for me, so this one resonated with me.
May 18, 2016 at 2:10 AM

Steve at 1975BaseballCards.com said…
Hey Greg, the thing is it means much to some people and that's what really matters. And you're the one that helped make that connection with your words and stories. Glad you shared this, nice job,
May 18, 2016 at 2:32 AM

Reds Card Collector said…
Great post Greg! Always nice to hear about a Red from the Crosley era. Amazing that his sons were able to rub shoulders with Kluszewski and Robinson. Definitely something to cherish.
May 18, 2016 at 7:58 AM

Adam said…
I love reading stories about old Reds players and this was just fantastic. One of my favorite pieces I've read from you. Great work!
May 18, 2016 at 11:01 AM

J. Meeks said…
I can't say anything that hasn't already been said. I loved this piece, and I am looking forward to finding your original story on the blog and reading it too. Thanks for sharing!
May 18, 2016 at 4:52 PM

AthleticGigantes said…
I enjoyed this post. It reminds me of similar articles from Baseball Digest when I was in grade school in the late 70's. This type of story about players I didn't know about drew my attention to baseball and I still have those magazines.
May 19, 2016 at 12:37 AM