May 19, 2016
(Hi. If you're in the habit of waiting for new posts to pop up on your blog roll or the old-fashioned Blogger dashboard thing, then you might have missed out on my last couple of posts. Blogger seems determined to make me into an early morning poster -- refusing to publish new content that I posted on my blog in the early evening and instead publishing it at 6 in the morning, when I am always 100 percent asleep. Meanwhile the blog roll acts like I did publish it during the previous evening, but it doesn't appear on the blog roll until 6 in the morning, and by then it has disappeared off the most recent items on everyone's blog rolls. I realize I'm complaining about a free service, which is something I just criticized people for doing in the last post. But some of you didn't read that post because of Blogger hijinks. Also, I know the old tricks about republishing the post to goad it into appearing. That ain't working. Believe me. Anyway, it's time -- I think -- for Cardboard Appreciation. This -- whenever it shows up -- is the 240th in a series): 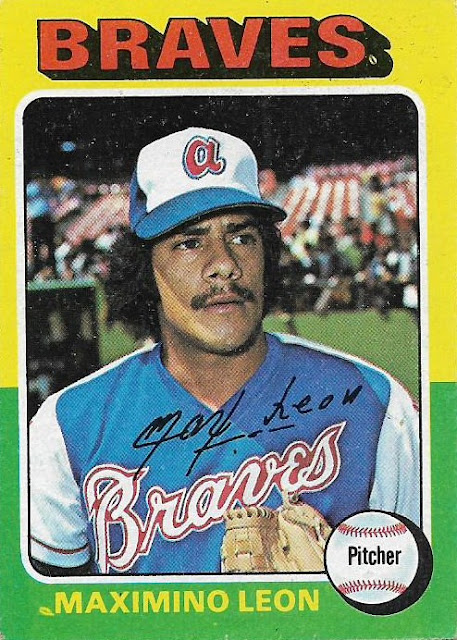 This is borderline crushing because the players who appeared in that first year that I collected are important to me. I feel like we have a connection that I don't have with players from the '80s, '90s or today. If I was ever one of those idiots with an entourage, these would be the guys in my entourage. The players in 1975 Topps.

I pride myself on my knowledge of '75 Topps guys. And I certainly thought I knew how to pronounce the names. I know how to say "Sudakis," "Grabarkewitz," and "Friesleben." I privately shame people who flub "Apodaca," and I'm certain I'm the only one who knows how to correctly pronounce "McAnally." I can't even claim ignorance over Latin names. I've known Winston Llenas' last name is pronounced "Yay-nas" since I was yay-high.

I feel like I know them. I know everything about them -- or at least everything that their baseball card says about them.

And this baseball card says this player is named Maximino Leon.

But I didn't see that as a kid. I saw Maximo Leon.

That's what I called him. Maximo. I thought it sounded cool. MAXIMO. I wanted a cool name like that. 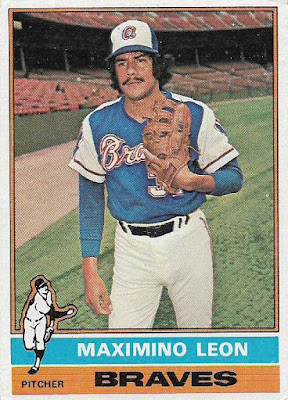 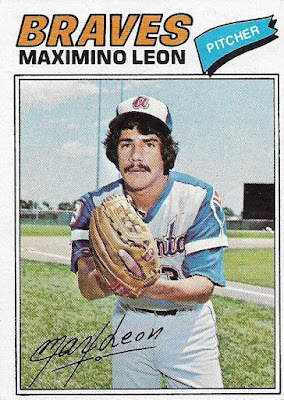 For the years that followed, this unmemorable relief pitcher for some really lousy Braves teams teased me with his name. I'd call him "Maximo" and Leon would stare back at me, looking mildly perturbed for botching his name. I could have simply called him "Max." That's how he signed his name. And if you look him up on baseball-reference or wikipedia, he's called "Max" there, too.

Apparently nobody wants to make the same mistake I did.

It's all Topps' fault anyway for being so damn proper. Instead of keeping it simple and printing "Max Leon" on his cards, it had 9-year-old boys stumbling over his name.

I'm sure that now that I know his name isn't "Maximo," I'm still going to call him "Maximo." There's no way I'm going back after 40 years of this.

So how about you? Any baseball names you botched as a kid? I can't be the only one.

Swing And A Pop-up said…
The only one that comes to mind that I mispronounced initially was Manny Sanguillen. Well that and Rusty Kuntz, but I did that one on purpose.
May 19, 2016 at 9:54 PM

David said…
I never saw the 'n' in Rettenmund and unwittingly added an extra 'l' to Lynn McGlothen (between the h and the e.) And I am still not sure if the accent is on the first or second syllable of Lerrin LaGrow's first name.
May 19, 2016 at 11:11 PM

AthleticGigantes said…
For me it was Willie Strangle, I mean Stargell, until I was corrected by a friend in the lunch line. I was 10 and showing off some new 1974 League Leader cards. I still can't believe I misread his name.
May 20, 2016 at 12:17 AM

Stubby said…
It ain't baseball, but the biggest embarrassment of my life was when I was working professionally in radio. I had a mid-day shift at the time and the hot record was "Funky Town". I totally missed the joke. For more than a month, I totally missed the joke. For over a month, I announced the "band" as "Lipps Incorporated". Until, one day, I heard another announcer announce them as "Lipps Inc". "Lipps Inc". "Lip sync". Oh. Excuse me, I'm just going to go crawl under this rock for a little while. I tried to cover by turning it into an ongoing bit, where I would purposely get the artist or song title wrong (my favorite was John Stewart's "Lost Her In The Sun", which I would announce as "Lobster In The Sun"), but I don't think anyone was buying it. Sadly, I wasn't 9 or 10 at the time.
May 20, 2016 at 2:56 AM

GCA said…
My friend Billy would always mispronounce League - he would say "lee-joo".