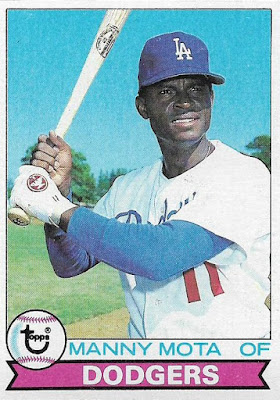 I was informed a couple of weeks ago that April was Wantlist Awareness Month.

I had no idea that a month was dedicated to such a worthy cause. Imagine my embarrassment as a collector.

Also, Wantlist Awareness Month has come and gone and I'm only informing people of it now.

Some ambassador I am.

The person who told me about Wantlist Awareness Month is Dennis of Too Many Verlanders/Manninghams. And to properly celebrate the month, he found six cards off my Nebulous 9 list and sent them to me!

I've mentioned many times how useful a "most wanted" list is on a card blog. I know that people don't have time to go through pages and pages of wants from a team collector who also collects sets. The Nebulous 9 is the frozen dinner of want lists! And just as tasty!

I try not to make the Nebulous 9 wants too difficult to find. Once in a while I'll throw a toughie on there just because I know some people think nothing of throwing 60-year-old cards around. But, most of the time, these are cheap, easy-to-find cards.

And, as a bonus, you're probably sending me a card that has been a headache for quite a while! 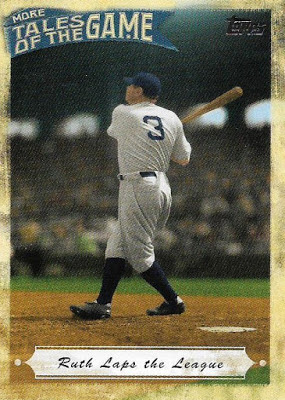 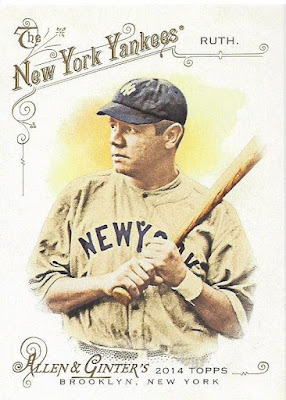 Here is another Babe Ruth card. Can you imagine me -- a known Yankee-hater -- having two Babe Ruth cards on my Nebulous 9? The things Yankee-loving Topps will force a collector to do.

This Ruth card was the last non-SP card I needed for 2014 Allen & Ginter. By no means do I consider this set complete. I'll be going after the last few SPs from the set soon. Then, if I'm not completely sick of Allen & Ginter by then, you'll see a 2015 A&G want list. 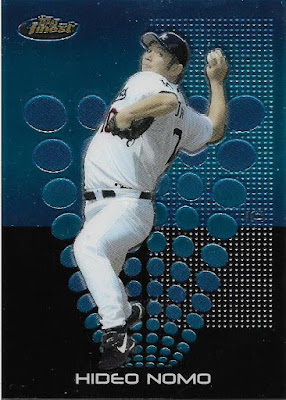 A particularly pesky card. The 2003 Finest set is my all-time favorite Finest set, so I've been aware that I didn't have the Hideo Nomo card for years. What I've had is the refractor version of the card (it's silver instead of black on the bottom). In fact, I have two or three different copies of that refractor Nomo. One of the great frustrations in life is owning a parallel copy of a card but not the base version. 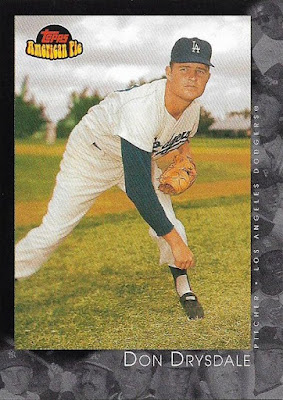 When I placed this card on the Nebulous 9, I thought it'd complete the Dodgers team set from 2001 American Pie, but I'm still lacking the Duke Snider card. I'll probably force that onto the revised Nebulous 9 soon. 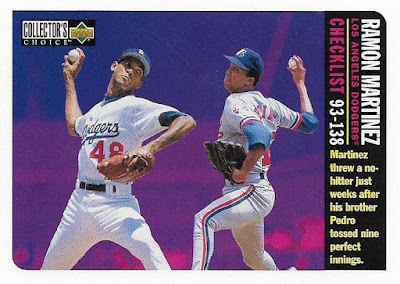 I'm guessing it took so long to obtain a mid-1990s Collector's Choice card because Pedro Martinez is on Ramon's card. Of course this still doesn't explain why I still need #336 from Collector's Choice, which is ... um, Roberto Kelly. 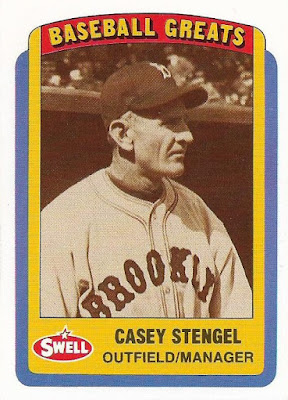 Oh, Swell, sometimes you're not.

Casey Stengel here -- there aren't enough Brooklyn Dodger cards of Stengel -- finally finishes off the 1990 Swell Dodgers set. Both 1989 and 1991 Swell are a long way off  from being complete. But let me enjoy my Stengel for a little while first.

After receiving these six cards from Dennis (as well as a handful of random Dodgers), I've quickly built back my Nebulous 9 to a proper nine cards. Funny how I'm always wanting cards, huh?

Also, regarding that Wantlist Awareness Month?

But now I'm thinking it should be a thing -- aren't you?


(P.S.: Blogger is being goofy about its publishing again. Last night, something I published at 8 p.m. didn't show up on people's blog rolls until 7 a.m. the following morning. I hope everyone knows that a night owl ain't publishing anything at 7 a.m. So please check your favorite blogs for updates).

Zippy Zappy said…
"I was informed a couple of weeks ago that April was Wantlist Awareness Month."

Mark Kaz said…
"One of the great frustrations in life is owning a parallel copy of a card but not the base version."

Adam said…
I am completely unaware of things such as this until someone makes me aware of it, in which case I then become aware instead of being unaware. Confused? Me too.
May 11, 2016 at 8:47 PM

BobWalkthePlank said…
Great stuff from Dennis. He is a good dude.

Sometimes if a post didn't go live as scheduled I've found that going under the edit function and then hitting update helps.
May 12, 2016 at 8:27 AM

Fuji said…
Even though it's something Dennis made up... I feel compelled to finally publish my wantlist. It's something I've been meaning to do for awhile now... but was too lazy. Thanks to you and Dennis for the inspiration.
May 12, 2016 at 7:41 PM