May 09, 2016
If you've ever bought a repack, whether in box or pack form, you have probably pulled what is referred to as a Hygrade card. 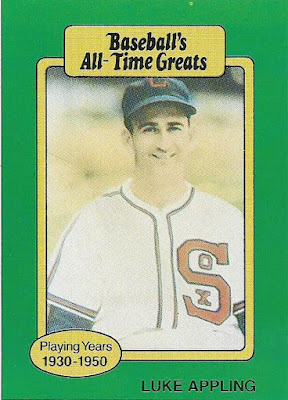 For whatever reason, the Standard Catalog of Baseball Cards is reluctant to call these cards that. Under "Hygrade," it refers you back to a set called "Baseball's All-Time Greats," which is the title that runs at the top of every card.

But Hygrade is the company that issued this set. The Hygrade Sports Card Company put out its own price guides and also this set of legendary players.

I didn't know any of this a couple of weeks ago. Then a pair of events conspired to get me to read up on this late '80s oddball, with the strangely-cut cards, differences in card stock, green or orange borders, and even some variations in photos for individual players.

First, I nabbed the Hygrade Gil Hodges card in my "Under 50 Cents" quest from a few posts ago. I knew it wasn't as easy to find as some of the other Hygrades, and GCA of The Collective Mind confirmed it and informed me there were two separate issues of the set, which I didn't know before. He also said the second set of harder-to-find cards contained more recent players.

Second, John of Johnny's Trading Spot held a contest a little while ago, which I won. My prize was 50 cards from the Hygrade Baseball's All-Time Greats. So this was the perfect opportunity to figure out: 1) which set I had; and 2) whether one set had more recent players than the other one.

I decided to separate the cards I received by decade. Obviously a number of players in the set played in multiple decades. But I separated by the decade with which I associated the player. For example, Babe Ruth played in the 1910s, 1920s and 1930s. But I associate him with the '20s. 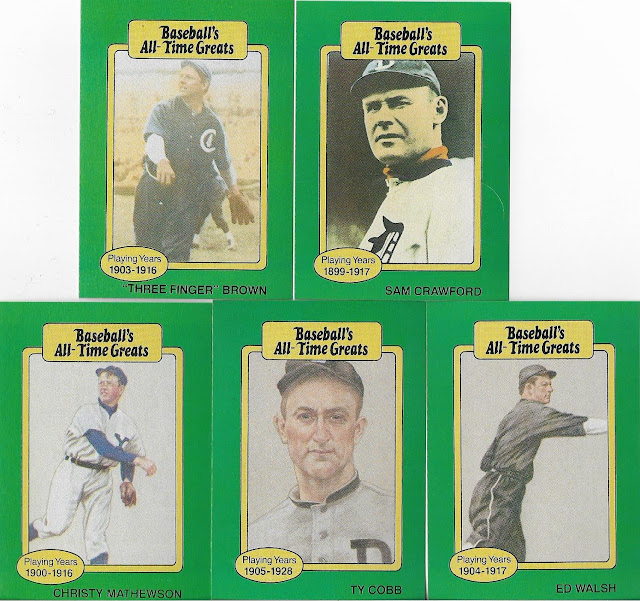 The set is a mixture of photographs and drawings, obviously with most of the drawings from early in the 20th century. Still I appreciate the photographs more. 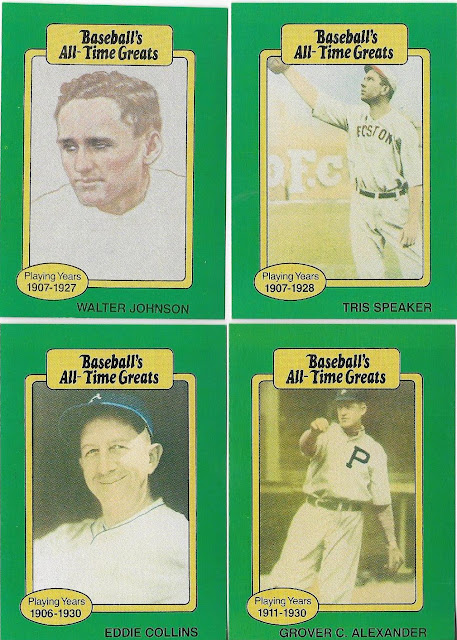 The cards, although approximately the same size, simply don't line up on the scanner unless I put them in pages (and I was too lazy for that). 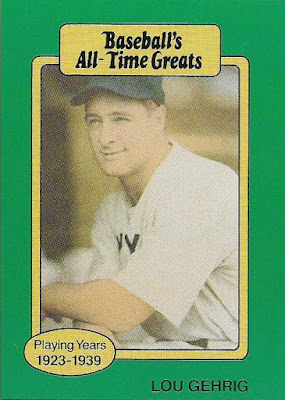 Already I was getting a pretty good idea that this was not the set with "more recent" players. Nineteen of the 50 cards are from the first three decades of the 1900s. 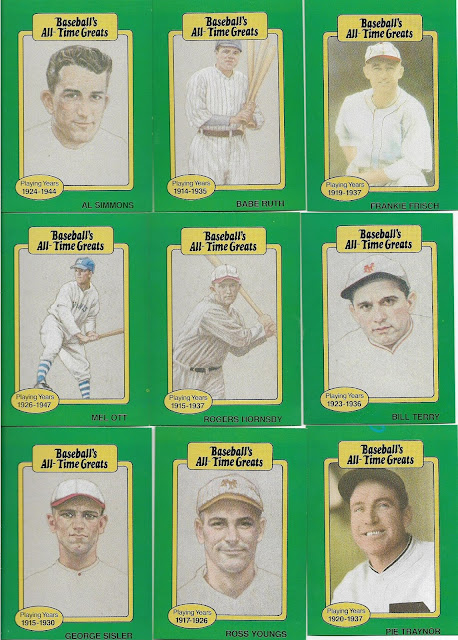 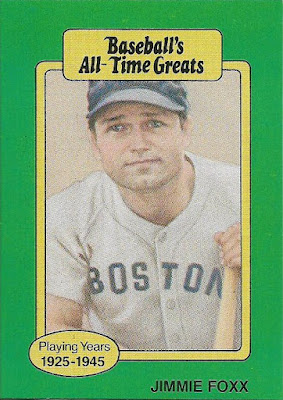 Sometimes a single event, like for Harnett and Hubbell, cements them in a particular decade. And then there are players like Jimmie Foxx where I could go either way. 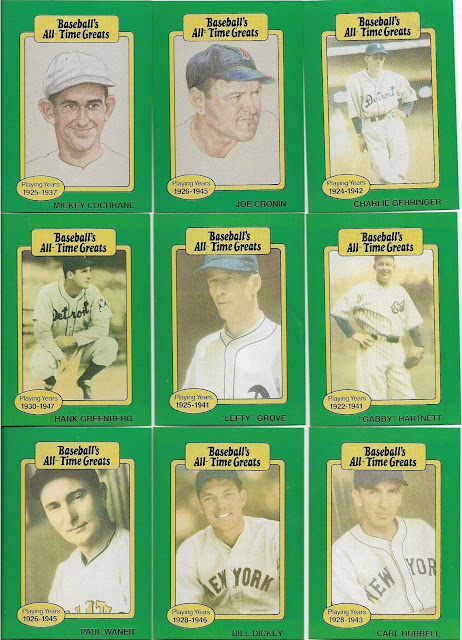 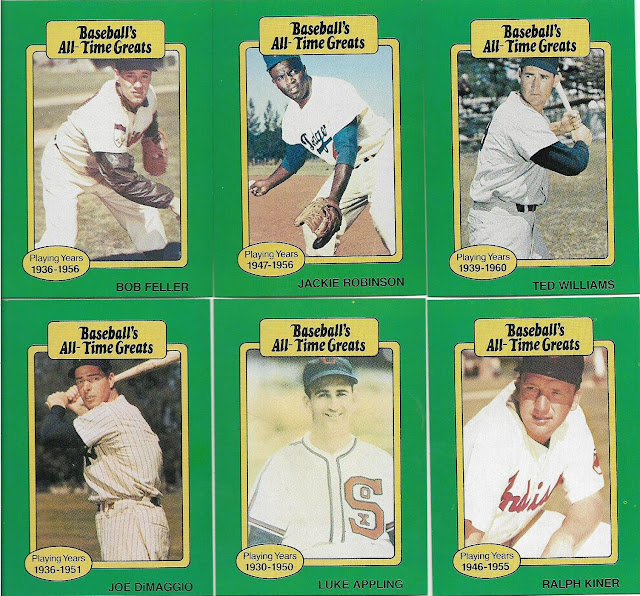 Some of the cards, like the Jackie Robinson, come with an orange border. From what I've read, that was a promo set. I have no idea how it was issued, but there are far fewer of the orange cards than the green ones (The SCOBC lists just four orange variations for the set). 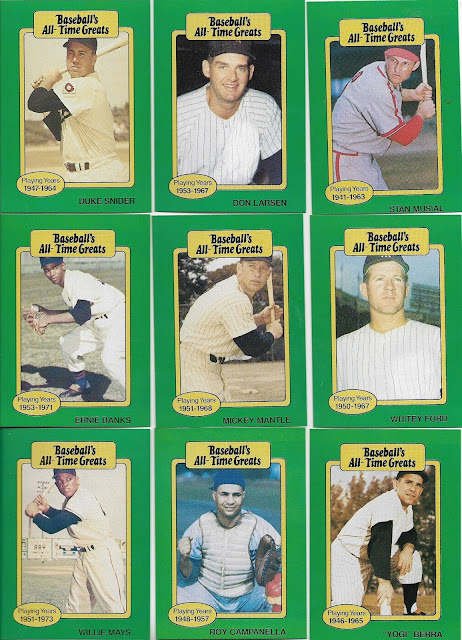 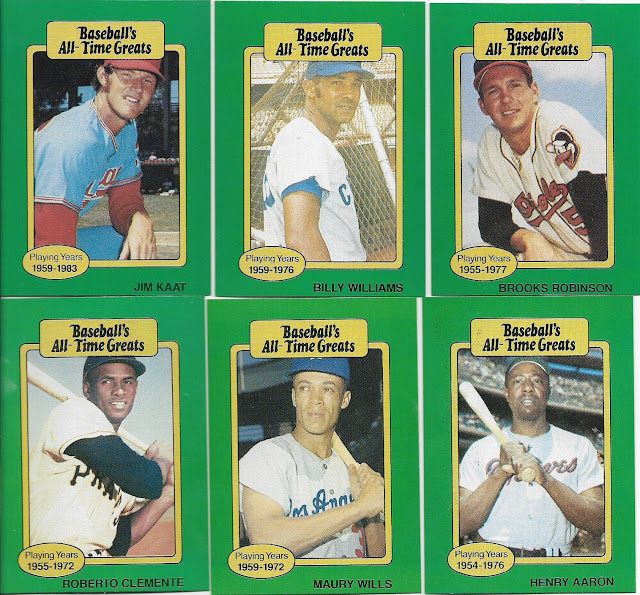 I associate a few of these guys more with the '70s. But if I'm being fair to their careers, they're '60s guys, even though Kaat is wearing a '70s White Sox uniform. (There is another Kaat card in this set in which he's wearing a Cardinals uniform, which is from the '80s).

So those are all of the cards I received from John.

Here is a list of the second half of cards from the set, by decade:

So, obviously, the set that I don't have has the more recent players. There are no '70s-based players in the set that I have (although a cased could be made). But there are 10 players from the '70s among the cards I lack.

I'm probably not interested in getting the second set of cards, other than the Dodgers I don't own (Drysdale, Erskine, Reese and Hodges, as well as a different photo of Duke Snider).

The main goal has been reached: I know a lot more about Hygrades than I did two weeks ago.

Anonymous said…
Interesting... I had assumed that they were all pretty much so common as to be worthless, I had no idea there was a second series. Now where did I put that small stack of Hygrades I have...?
May 10, 2016 at 12:23 AM

GCA said…
Should only be five orange ones...

Now that you know the basics of the set, how 'bout the variations? :)

Actually, for you there's only the orange Jackie and the Duke Snider with the hat logo visible beneath the BBATG logo...
May 10, 2016 at 8:15 AM

Bo said…
What you have is the first half. I got that collectors kit in 1987, the first year I started collecting cards. I learned a lot about old-time baseball players from that set.
May 10, 2016 at 11:45 AM