Sure, I watched the home run race between Mark McGwire and Sammy Sosa. But I felt more detached from baseball than I had ever been. In March, my daughter was born and the first thing I think of when "1998" is mentioned is her.

She had a way of pushing everything else that I thought was important aside. I ignored old standbys of tracking time, such as sports and music, for the first time since I was in grade school. Hobbies and pastimes didn't exist anymore. The year was spent tending to human basics, feeding, bathing, sleeping, cleaning -- trying to keep everyone happy, basically, and not just the baby.

On top of that, I was learning a new and complicated job. And an ice storm uprooted the family and our life for nearly a month.

But, apparently for everyone else on the internet, 1998 rained down a bounty of cardboard on collectors. The most amazing cards anyone had every seen. Cards that featured innovative new technology and dazzled the senses.

The most fascinating and collectible, so I'm told, were inserts, autographed "hits," and something called "game-worn relics," which had been invented the previous year.

Pretty crazy for all of that to go on under my nose and never having a clue it was happening.

I'm still catching up, and although I blame the '90s for some of the card woes we still deal with today -- the overemphasis on inserts and star players, the advent of artificial scarcity and the devaluing of the base set -- I do admit there is some terribly satisfying cardboard from that time ... and almost all of them are inserts.

1998 seems to be the pinnacle of that time period, and for me there is no finer-looking insert from that year than Donruss Crusade. 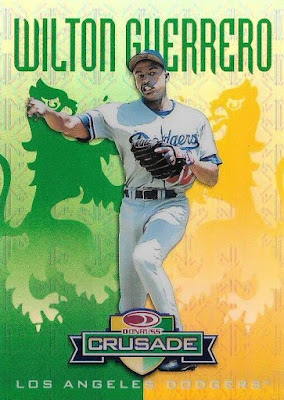 This card arrived from AJ at The Lost Collector. He has known and loved Crusade cards since they were issued, and when I mentioned my fondness for Crusade on this post, he decided to send this '98 Crusade of Wilton Guerrero to me.

The only drawback from the set (aside from the fact that they almost defy you to collect them -- "let's put 30 of these in one set, 30 of them in another, 30 of them in a different one and not tell anyone!") is the checklist. Wilton Guerrero, although a top prospect at the time, isn't very notable, and there are people like Jason Dickson, Neifi Perez, and Todd Greene in the set.

But that's quibbling. Perhaps I better look at how fantastic the card is again.

There were several interesting inserts issued in 1998. I don't think they can touch Crusade, but I thought I'd look at the next best 6 from that year -- the year of the insert: 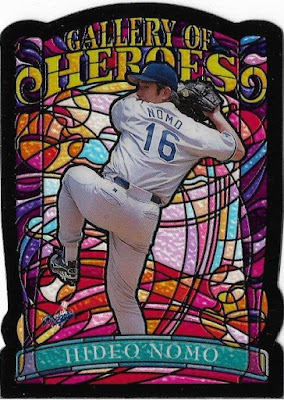 Not the first stained-glass-window-themed cards, but they are the best according to me. These appeared 1 in 24 packs. I believe there are also more rare jumbo-sized versions. Good thing I don't care about jumbo-sized cards. 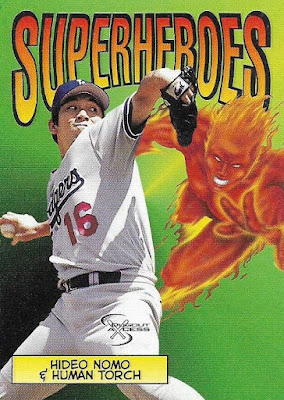 The name might not be as fun as another Dugout Axcess insert set, called "Gronks," but superheroes on baseball cards is an idea that was long overdue. 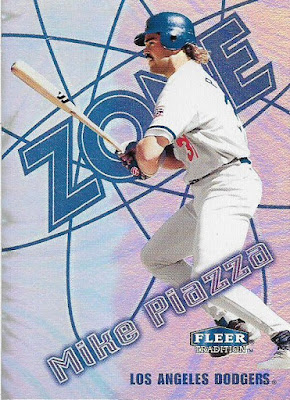 Holy crap, these things were issued at 1 per 288 packs. ... I love the look of these cards and the etching style used. This is the proper way to use foil. This should have been the template for future foil use. I don't know what happened. 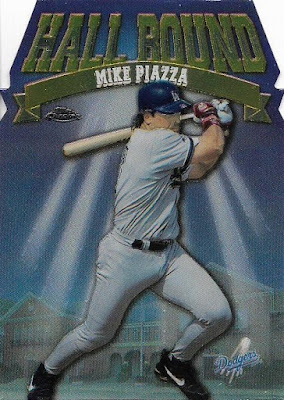 You've probably noticed an awful lot of Piazza and Nomo here. It is 1998, you know. These diecut cards were available one in every 24 packs. There are apparently refractor versions, too, which I probably would never notice if I came across one. 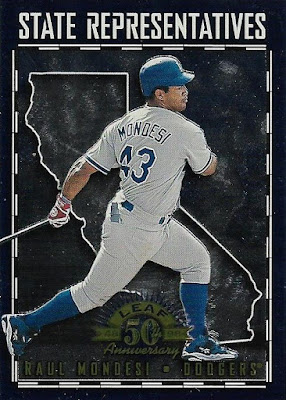 It's not much to look at here, but I really like these cards in person. The fact that there are different states in the background makes me want to collect the whole set. These cards are numbered to 5,000.

Now, no question, there are plenty of '98 inserts that I didn't cover, several of which belong on this list. But I've kept it to cards I own -- and to insert sets I like (there were a few clunkers in '98, too). One glaring absence is the 1998 Skybox EX 2001 (the name of the set alone is '90s obnoxious) insert "Cheap Seat Treats." Those are the marvelous cards that feature a player caught in a folding chair.

But I'll get that card one day. And a sampling from all those other '98 inserts, too.

My daughter's graduating this year.

The Lost Collector said…
Glad you enjoyed the Crusade. They are the best. 1998 was indeed a great year for inserts...Pinnacle Epix, Circa Thunderboomers, Ultra had a few, etc. It seemed like every company was one upping the next because there was competition.
May 5, 2016 at 9:48 PM

BobWalkthePlank said…
I've been trying to track down as many Pirate inserts from this time period as possible. They are not the easiest finds.

Johnnys Trading Spot said…
The Nomo Stained Glass is my favorite from the cards above. Super Cool.
May 6, 2016 at 6:06 PM

Jeremya1um said…
Those are some great cards! I'm going to start making a list of cards I want from COMC and pretty much all of those insert sets will be on it.
May 7, 2016 at 10:20 AM