I've got myself another little recurring series here. It's another one of those time-savers that requires minimal thought. In other words, it's almost a Tumblr post. (Remember my Tumblr page? It was a good idea until I realized the format doesn't think fondly of words and that was the end for me. This also means never expect to find Night Owl Cards on Instagram).

The posts in this series after this one will feature some sort of name or title after the "well, lookie there," intro, at which point I expect readership to plummet dramatically for this particular series. That's usually how it goes.

The debut entry has to do with Juan Samuel and his 1992 Upper Deck card. It's a handsome devil of a card, showing Samuel diving into the base one-handed, perhaps completing one of his 23 stolen bases in 1991.

1992 UD is a rather attractive set and this card is a perfect example.

And sometimes the photo is so good, you get to see something very similar in the same year: 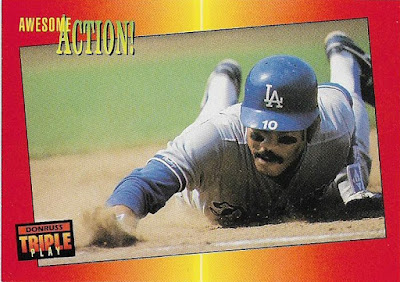 Could be wrong, but I think this is the same play just a second or two before the photo on the Upper Deck card. The Upper Deck photo is better because of the base and the glove hand, but give Triple Play credit for knowing the value of dirt flying. Also, Triple Play let everyone in on the fact that this photo was "Awesome Action," while UD just let that go understood.

There are a number of examples of the same photos, or photos from the same play, appearing on competing baseball card brands. The first one I discovered is the famous 1982 Topps-1982 Fleer Rod Carew debacle in which the exact same photo was used.

Stuff like this is a product of competition and embarrassing when it happens. Today, Topps owns all of Major League Baseball photographically so the only repeat photos that you see are when Topps gets lazy and uses the same picture on different brands. Are they embarrassed? Should be, but probably not.

So that's your eyeful of 1992 Juan Samuel on Well Lookie There.

Once a Cub said…
I want to say there's a pair of Andruw Jones cards (as a Dodger) that use the same photo of him sliding into 3rd base. They are also horizontal cards which is why they stick out in my mind. I want to say regular Upper Deck and Masterpieces? 2008 or 2009?
May 25, 2016 at 2:13 PM

Fuji said…
Great eyes. I never catch these things. I've seen both the 82F and 82T Carew cards and it never occurred to me that the same photo was used. So... do you happen to have a Juan Samuel stack and you stumbled across these two cards? Or... did you come across the Upper Deck card and remember the Triple Play photo? What's the story behind you putting these two cards together? Inquiring minds want to know.
May 26, 2016 at 8:33 PM

night owl said…
I was going through my every-three-months Dodger binders resorting and discovered them.
May 26, 2016 at 11:52 PM