November 20, 2014
(Welcome all to National Absurdity Day, celebrated every November 20th. I can't think of anything more absurd than the kids in town already using up two snow days before December hits. It's bundle-up-with-your-baseball-cards weather! Time for Cardboard Appreciation. This is the 216th in a series): 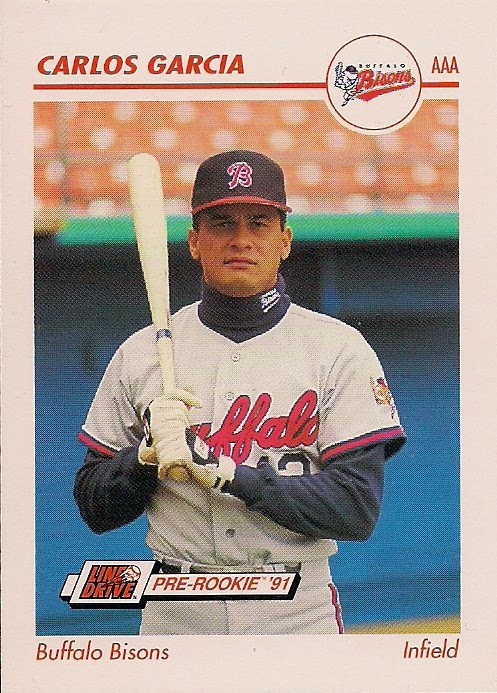 I get sideways looks when I say that in front of people who have never lived there. But the ones who have ... and have left ... and have spent years figuring out a way to get back ... know what I mean.

Buffalo is more than snow and hapless sports teams. It's the location for some of the greatest times of my life. Of a lot of people's lives.

That's why I got a little sad when I saw the regurgitation of epic Buffalo snow photos across the internet accompanied by this tag line: "be glad you don't live in Buffalo."

This was written by someone who obviously never spent more than an airport layover in the city (which, by the way, isn't Buffalo, it's Cheektowaga). Because the tag line should have read: "be sorry you don't live in Buffalo."

First, let's address the snow thing. Yes, copious amounts of snow fell in a short time, more snow than life-long Buffalonians have ever witnessed -- and that includes the Blizzard of '77 -- including my sister-in-law who has lived there all her life. But as many people don't realize, the snow didn't really hit Buffalo proper. If you live "in Buffalo" chances are you got maybe a few inches. That's it.

You've seen the pictures. Lake effect snow is very selective in where it lands. One town gets four feet. The next town over gets four inches. This is not an exaggeration. So, if you lived in most of Buffalo, or the northern suburbs, or the western suburbs, you didn't get any amount of snow that would ever make the national news. A foot at the most. (The Bills' Stadium is in South Buffalo, which always gets hammered with lake effect).

But you've seen the memes: "Come for the chicken wings, stay because you can't find your car." Well, I could drive into Buffalo tomorrow, get some chicken wings, drive out and not even see any lake effect snow.

But that's incidental stuff. Because the point is, it doesn't matter how much it snows in Buffalo or the surrounding area. If someone offered me a job in the city in my field of expertise right now, I'd say yes without hesitation.

Buffalo is "home" to a lot of people who don't live there anymore. I don't know if I can explain why that is in any way that doesn't make it sound like I'm simply homesick. But it's more than that. Buffalo has always been a small town in a big town's body. Sure the city has had a lot of tough luck in the last 40 years, but that hasn't affected the people. I've never met more genuinely likeable people in my life than in that town. And I've never had a better time. The folks who are covering the storm far from Buffalo do get it right when they say the city's residents are "good-natured." They are good-natured. There needs to be more good-natured people.

I didn't grow up in Buffalo but I went to college there. A lot of my family is from Buffalo and some of them still live there. After I graduated, I tried to find ways to get a full-time job in the area. But newspaper jobs aren't as plentiful as jobs in many other industries, so I found a job farther away and then I spent years trying to get back to Buffalo.

Eventually, I gave up. I had to start a life in the place where I was and not half-live in another town. So that's what I did. But I still miss it. The bars. The sports. The culture. The attractions. The food. The feeling that you will never stop having something to do, but not be overwhelmed by it, as I am when I visit larger cities.

Today, I know many former Buffalo residents who live where I do now or who live in much warmer places, like Florida and California, who can't get enough of Buffalo. They have to see what's going on in the area. They want to know what's on the news on WKBW or WIVB. They're desperate for the food you can only get in Buffalo. In fact, I have some Ted's hot sauce in my refrigerator right now.

And, so, if you've stuck with me for this long, you're wondering what this has to do with cards. 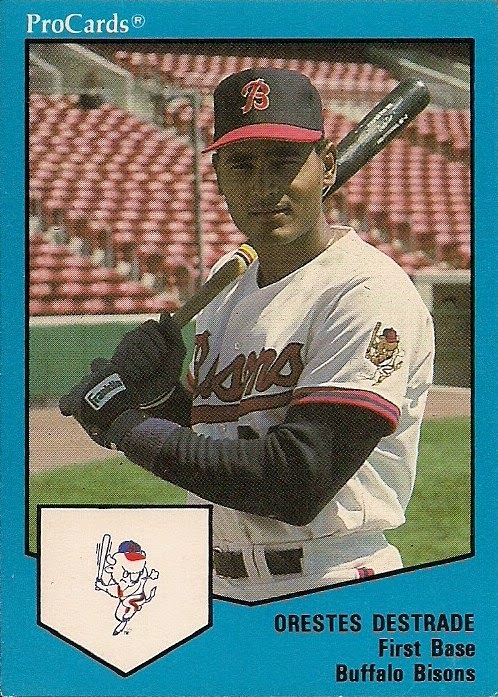 Again, not much, except for the fact that when I find a card of a Buffalo Bison, I make sure I keep it in my collection. The same with the Buffalo Bills or the Buffalo Sabres. I don't necessarily collect them, but they all have more meaning than your average card.

Yeah, Buffalo is where I covered my first baseball game and first football game. It's where I met my wife and formed lifetime relationships. But honestly it's more than that and no amount of snow would ever make me sorry I lived there.

A couple of days ago I became friends with an old girlfriend on Facebook. It was a brief relationship and we lost touch while we were still going to the same college in Buffalo. I had no idea if she even graduated from the college. This was my first time connecting with her since then.

The first post that I saw on her wall?

"I will forever and always love Buffalo. Miss it lots."

Zippy Zappy said…
I (sort of) know how you feel. I get a little flustered too whenever somebody belittles places near and dear to my heart.
November 20, 2014 at 9:44 PM

Swing And A Pop-up said…
I once read an online article where the town I grew up in made a "10 Best Places To Live" list. Some of the comments after the story trashed my hometown and it irritated me quite a bit. So even though you didn't grow up in Buffalo, I understand your feelings towards a place that means a lot to you.
November 21, 2014 at 12:49 AM

Commishbob said…
I get it. I shared an office and coached alongside a native of Buffalo for over 20 years. He never tired of talking about it. I've never been to Buffalo itself but I've been to plenty of places near it. Its one of my favorite areas of the country.