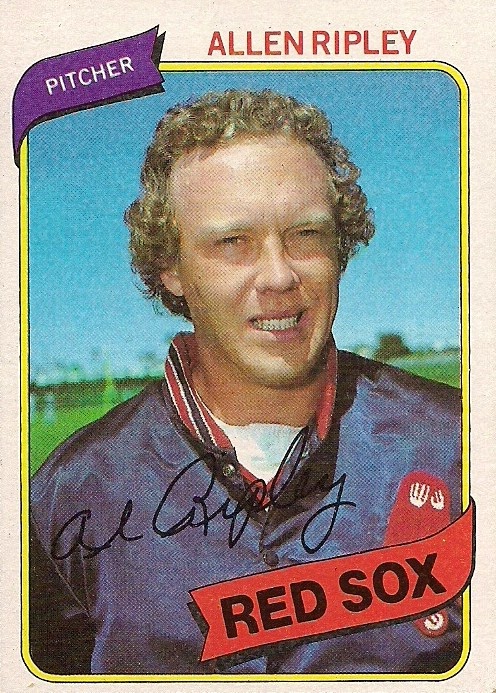 The thing about starting a blog when you're in your 40s is the topic of death is going to come up periodically. The 40s is the decade when you begin to come to terms with your own mortality, at least it is for me.

And so, various times, I pause on this blog to honor a ball player that's passed from this earth. And I'm particularly upset when it's someone who was featured in the 1975 Topps set, because that means he was playing when I was a kid.

But former players dying who were active when I was in high school? That's just way too close to home.

Last week I learned that two players who were featured on cards that I collected when I was in high school had died.

One is Allen Ripley here. He was 62. Way too young.

Ripley grew up in Massachusetts and he was considered a native son to Red Sox fans. Because there were two Red Sox fans in my family growing up, it was practically like we lived in Boston and there was great hope for any prospect like Ripley who was called up to the Red Sox. Gary Allenson, Win Remmerswaal, Chuck Rainey, Chico Walker, Reid Nichols, all of those guys.

But aside from any buzz created by his first major league victory, which the back of his baseball card says was a seven-inning, 5-4 win over the Blue Jays in 1978, I remember little else from Ripley except for the fact that I would get him confused with another Red Sox pitcher who would arrive a few years later, Al Nipper.

What I remember most about Ripley is his baseball cards.

I have almost all of them. In his first solo card above, Ripley, who was considered part of Boston's counterculture crowd in the late '70s (i.e. the guys Don Zimmer didn't like), is wearing that forced teeth-gritting smile that I know so well. 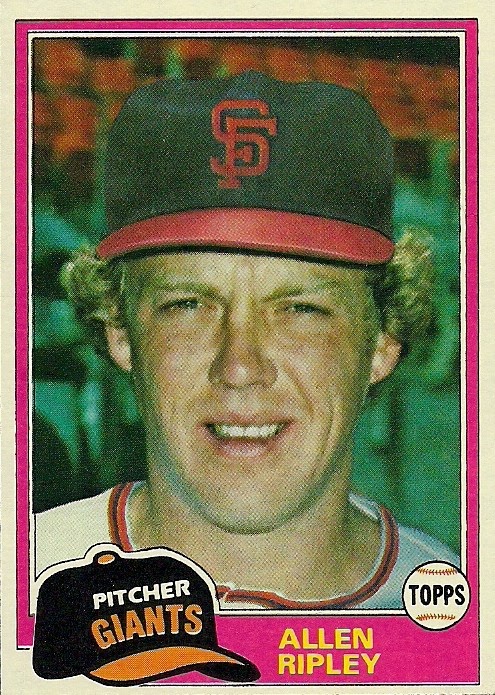 Then Ripley was purchased by the Giants and this is one of the worst airbrushed jobs in the entire 1981 Topps set. 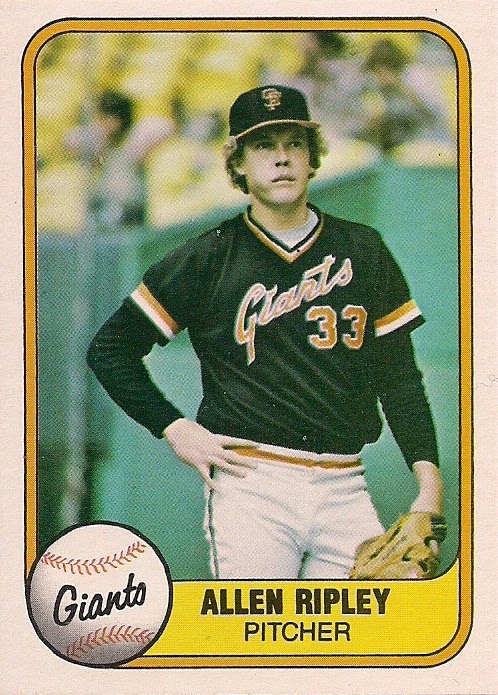 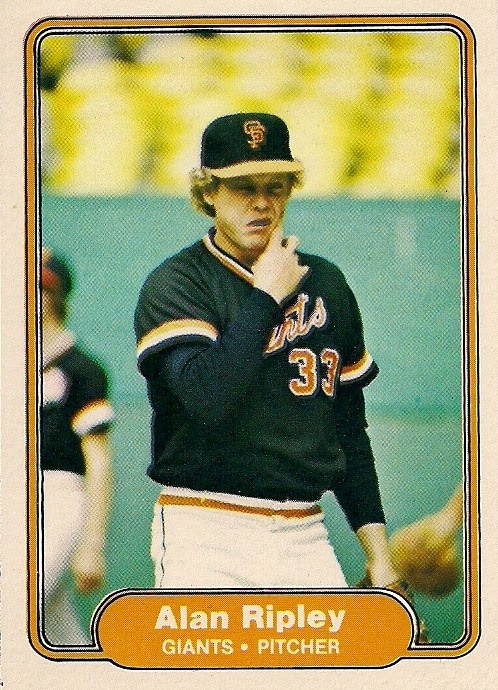 ... was probably taken a few minutes before or after his 1982 Fleer card.

The things you discover. Hell, I didn't even know I had Ripley's 1981 Fleer card until this was brought up. 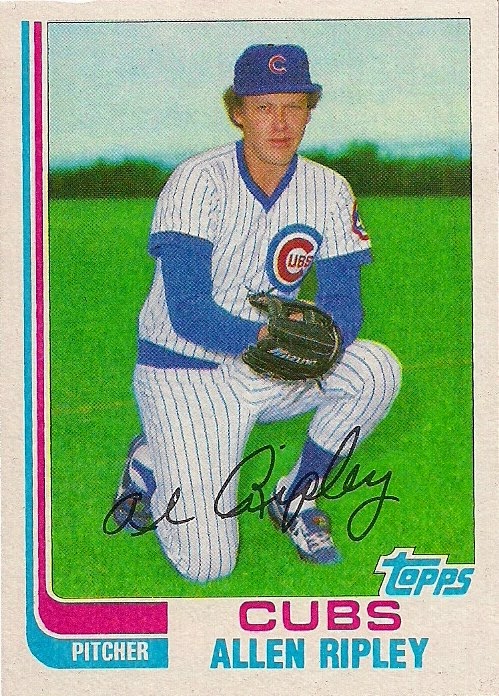 Ripley was traded to the Cubs during the 1981 offseason and he appeared in the 1982 Topps Traded set, which is the first traded set I ever owned and automatically makes it the best Traded set.

It's certainly the most familiar set to me. And Ripley's claim to fame here is his card follows the immortal Cal Ripken Jr. Traded rookie card in the set (the set is numbered in alphabetical order). 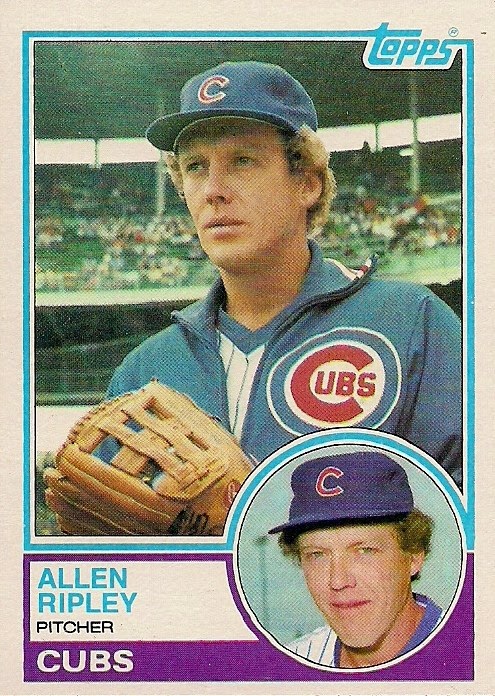 Final card of Ripley's career. Not a good one. 1983 Topps was all about action and when there wasn't someone in action it brought everything to a screeching halt.

So, as you can see, Ripley pitched during a significant collecting period for me. I have a few other of his cards that I didn't show.

But there's another former player who died recently for which I have very few cards -- just one in fact. 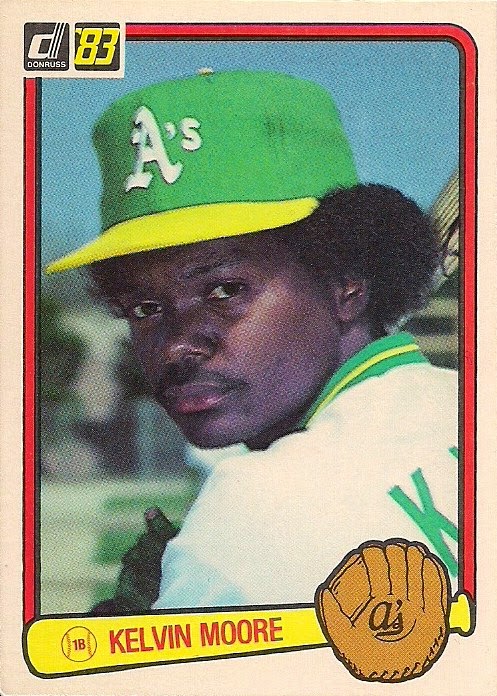 Kelvin Moore died at age 57. He had been ill for a long time.

I don't own the '82 card, which shows Moore much like this, except wearing a helmet and possibly with shorter hair.

But I have owned this '83 Donruss card of Moore since I pulled it out of a pack in 1983. It's one of the few '83 Donruss cards that I own because I didn't buy much of it after learning it was too much like '82 Donruss for my liking.

But I am being 100 percent honest when I say this: this has been my favorite card from the '83 Donruss set for over 30 years now.

This is why I can't be one of those collectors who collects just star players. Cards like this come along and speak to me and I'm helpless to their charms. I can't tell you why I've liked this card so much. It's probably the Afro, combined with the bright green cap and lettering on the back of his jersey. It's probably the unknown aspect, in which I had no idea who this was when I pulled it from a pack. It's probably because he looks like one of those cartoon kids from Fat Albert grew up and became a baseball player.

At any rate, it is and always has been a very cool card.

But players who were in the majors in the early 1980s dying?

That is not cool.

Mark Hoyle said…
Ripley grew up and still lived in the next town over from wher I live. Never played high school baseball. Made his name playing summer ball. Got signed after a tryout his father set up with Sox. His father also played very briefly for the Sox
.
November 16, 2014 at 8:17 PM

BaseSetCalling said…
Well I do like to see the crowd in the upper deck on a card at times, so the 83 Topps is nice for me. The 82 Topps Traded - whoa, that's like a certain grandfather of those nice little Kimball Champions cigarette minis from 2011.
November 17, 2014 at 11:42 AM