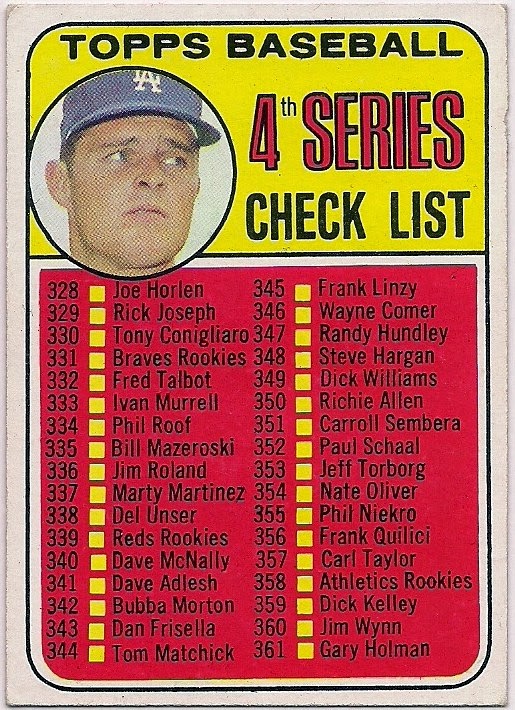 It's officially Christmas season, I suppose. But I'm not black Friday shopping nor taking advantage of any online black Friday baseball card deals. You have to have money to do those things.

So, what am I doing instead?

Wait! Where ya going?

This is important stuff here.

If you're a team collector, one of the more annoying facets of 1960s cards are the checklists. Between 1967 and 1969, Topps printed a head shot with its checklist cards. That head shot was a star of the period and there was a different star player on each checklist card.

The player is unnamed on the card, which often causes it to slip under the radar for team collectors. Some checklist guides don't even bother to mention the player pictured on  the card. It merely says something like "4th series checklist".

So this is what happened with the above 1969 Topps 4th Series checklist, which pictures Don Drysdale. Long after I thought I had completed my 1969 Topps Dodgers team set, I discovered that this card existed. Wow, was there ever a lot of cursing after that discovery. I think the neighbors are still talking about it. 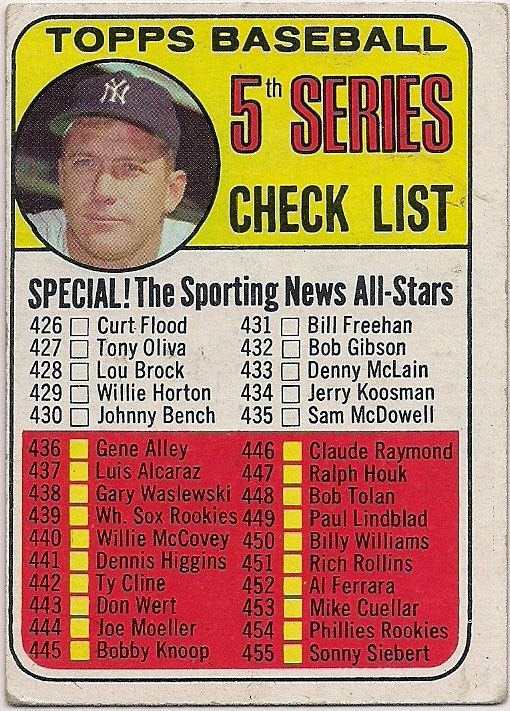 One side benefit of those cards is that you can pick up a card of a superstar that ordinarily would be out of my price range. This 1969 checklist is the only vintage Mickey Mantle card that I own and it was easily acquired. It doesn't hurt that it's off-center.

But after 1969, Topps returned to checklists without photos as they had done in most of the previous years (with the exception of 1961, which features action photos). This was the world in which I entered collecting. Most 1970s Topps checklists feature no photo, not even a drawing of a player. It's probably why I was so surprised when I discovered photos on checklists.

Through the '70s and '80s, checklists continued in the same pattern until, I think, 1984 Fleer, which broke its checklists down by team and featured a picture of the team's manager in an inset photo.

There were several other checklists that followed in the early '90s that featured action photos on its checklists. I pretty much ignored those and still don't know if there is a Dodger on, say, one of the 1993 Donruss checklists. I really don't care.

But then maybe a couple of months ago I was opening a Fairfield repack and this card fell out: 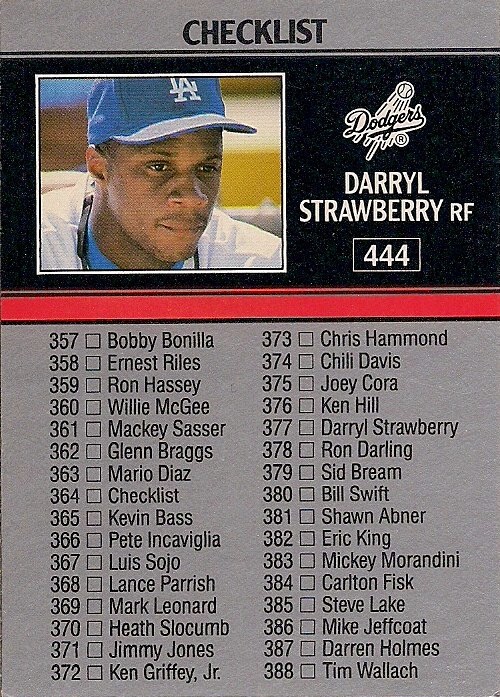 I think I squealed like my daughter when she was 5 and saw a spider in the back seat.

What the hell is this? It was like 1969 all over again. I was both thrilled and horrified. Thrilled because I finally owned the 1991 Leaf checklist card with Darryl Strawberry on the front but horrified because I never knew it existed, that it was laughing at me for two decades, and HOW MANY MORE OF THESE THINGS ARE THERE????

So, I decided to investigate this in the most half-assed way possible.

I'm sure a lot of checklist sources mention the players on each of these checklist cards, but how about getting them together all in one place?

This is the one place.

Here are the sets that I just mentioned with the player featured on each of their checklist cards:

Phew! No other unknown Dodgers.

Hopefully no one else freaked out when they spotted a player from their favorite team on a checklist like I've done.

But a bit of friendly advice: check your checklists twice.

Zippy Zappy said…
Very cool. Judging from how these checklists with head shots seem to pop up ever 2-ish decades, we should've been due to get more around 2011. We got robbed.
November 28, 2014 at 10:07 PM

Looking back at the early 1990's, it seems kind of ridiculous that the "high end" sets like Leaf and Stadium Club had checklist cards that were part of the set. They probably didn't want to break with "tradition", but it's not like anyone would use the checklists for their ostensible purpose... and in those cases where the cards had a glossy coating, I doubt that you could use them as true checklists.
November 29, 2014 at 7:32 AM

Mark Hoyle said…
Back in the day we had to keep an eye on not only the checklists but World Series cards, leader cards, team cads, coaches cards.
November 29, 2014 at 4:12 PM