I have this card 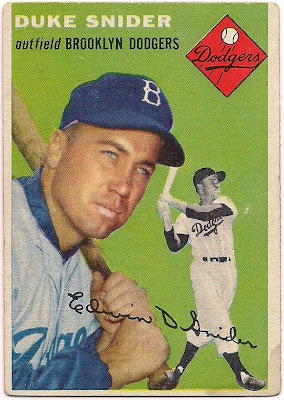 Somebody somewhere may have wondered why night owl hasn't entered $30 A Week Habit's contest to win a 1954 Topps Duke Snider card. It's vintage. It's a Dodger. Where is he?

Well, as much as I'd like to own two 1954 Topps Duke Snider cards so I can compile a week's worth of posts boasting about my '54 Snider dupes until I annoy everyone with a blog, one of these babies is plenty. I happen to own this card already. It was sent to me over the summer.

In fact, that card just went on a little tour of the house with me. I took it out of its abode, a smallish blue binder and set it down on the hamper while I was taking a shower (yes, I let a '54 Snider in the bathroom, exposed to dampness and all of the havoc that a bathroom could cause to a piece of cardboard, and it wasn't even wearing a toploader. Call the baseball card cops!). Then I took it through the living room, where the dog eyed it hungrily. And I scanned it and it's sitting on the desk in front of me now as a type this.

You can't have mine.

Sorry. I'm still grumpy about not being able to publish that post from a couple of days ago. You're not getting anything productive out of me for the rest of the week.

But I am going to show some cards that I got from some people. It's better than nothing.

The two packages I'm showing here came from two of the most frequent card mailers that I know. They both sent only a few cards, which is something I'm going to have to start doing more often, because I have a bunch of packages ready to go and I can't afford to send them in their current mailing state. But one PWE at a time, that I might be able to do.

I'll start with the king of PWE sendings, Jeff, of 2 by 3 Heroes. 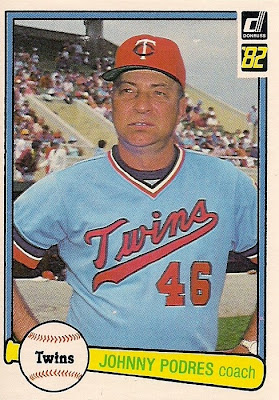 Look. It's a Twin. But fortunately, Johnny Podres is making it more interesting than that. This is one of the terrific "coach" cards from 1982 Donruss. A nice random way to throw a past great into a current set without coming up with an insert with some forced theme about "golden greats". 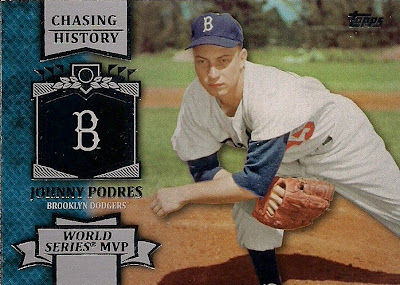 There's Johnny in more familiar gear. World Series MVP. The first one ever, in fact. 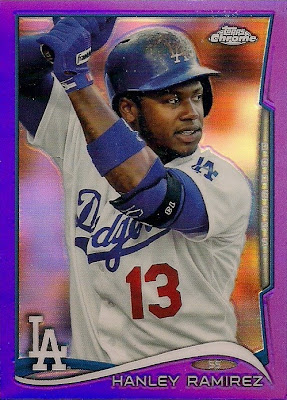 Some bloggers beat Jeff to sending a couple of cards, but here is one that he beat someone else to sending. Isn't it a beauty? I don't understand refusing to buy chrome. Yeah, it's basically a parallel set, but it features some of the most gorgeous cards that exist. 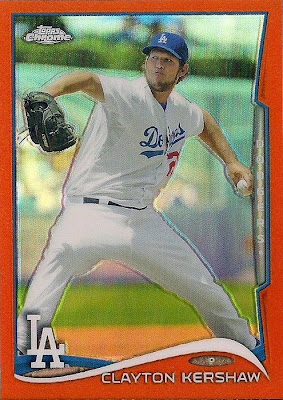 Moving on to an orange parallel. Here is the man that is getting closer to Sandy Koufax every year he plays. A third Cy Young Award yesterday. He will probably be the MVP, too, by the time this blog post appears. Joining Sandy once again.


The other card package came from Matt from Bob Walk The Plank. He's always sending goodies. Some fancy stuff, too. 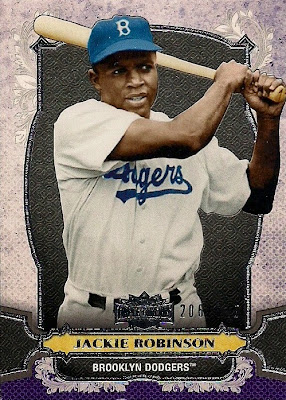 This is probably the ugliest product Topps makes. I will never be a Triple Threads collector, even if some of the relic cards make me guffaw. If you can use the word "ostentatious" with a baseball card, then you could can use it with Triple Threads base cards. This is the baseball card version of the giant marble white panther at the doorstep of an NFL player's mansion.

That aside, it's numbered and it's Jackie. So, weeeeeeeee! 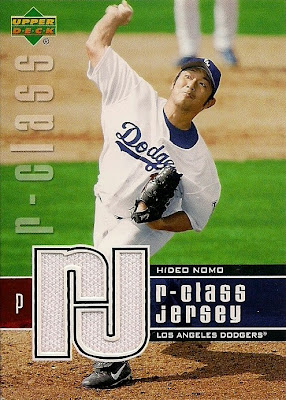 Relic cards of Hideo Nomo are a lot of fun.

I wasn't collecting much in 2004, so I don't know what "R-Class" stands for, it's always confused me. I've read that this was a retail-only product, but I hope "r" doesn't stand for "retail". 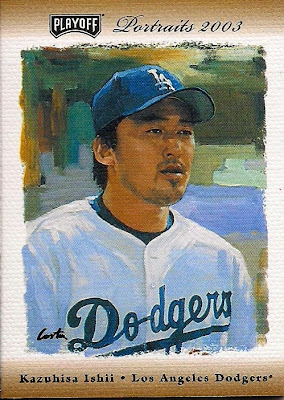 The early aughts were very fancy!

One day I'm going to compile a list of my thickest cards. I'll get out my measuring devices and everything and I'll post it here but since I don't have a book card someone will come along and laugh at me.

But anyway, this card is very thick. I'm glad Matt supplied the top loader because I don't have many top loaders that thick.

The front of the card presents a painting-esque image of Kaz Ishii.

And on the back: 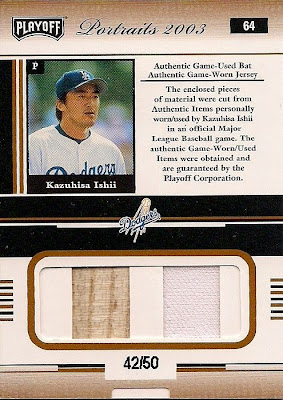 I believe this the first "back relic card" that I own.

Considering that relic cards were invented maybe six years before this card was issued, it seems odd that they were relegating them to the back already. (also, I might now have more bat relic cards of Ishii than of any actual hitter in my collection).

This card is very, very impressive.

But as impressive as this card?

Naw, they're not making anything that cool these days.

Good luck to all who entered.

And to the winner, welcome to the '54 Topps Duke Snider club.

JediJeff said…
When Rob put up his contest, it struck me, but I thought not much more about it.

BobWalkthePlank said…
I always assumed the people who designed the Playoff Portraits set spent all their time making it look pretty and realized they forgot to put the relics in the card. "Oh shit....the back of the card will have to work."
November 14, 2014 at 8:47 AM

Commishbob said…
My coworker was looking over my shoulder at this post and said Johnny Podres appears to be looking at his wife in the stands and noticed her chatting with a young studly guy.
November 15, 2014 at 11:15 AM