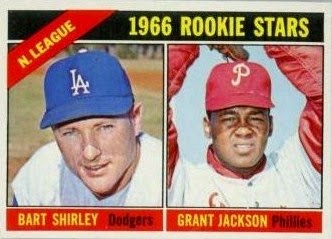 I'm sure a few of you have listened to the new hobby podcast, "The Trading Card Preservation Society," hosted by Matt F of Heartbreaking Cards of Staggering Genius and dayf from Cardboard Junkie.

It's been pretty interesting as they cover a variety of trading card subjects, and they aren't afraid to go into great detail. As is the case with wide-ranging podcasts, I'm not interested in all of the topics, but with just the one show as a guide I like where it's at.

Anyway, the second part of the first three-hour podcast began with the problems encountered obtaining some of the high-numbered cards in 1966 Topps.

Matt F said he collects Mets catcher Choo Choo Coleman, who has a short-printed high-number card in the 1966 set. He discussed how difficult it is to find that card for a reasonable price.

That caused dayf to bring up Braves pitcher Chi Chi Olivo (I swear, younger readers, I am not making up these names). Olivo also has a high-numbered card in the '66 set. It is also an SP. And dayf also said he cannot find a card of Olivo's that isn't outrageously priced.

It's true, both of those cards seem to be difficult to find for a budget-conscious collector. Here are the current ebay listings for Choo Choo. And here are the current ebay listings for Chi Chi. The prices there are pretty steep, but it seems there's a better chance of taking home a Chi Chi than a Choo Choo according to those listings. Makes sense with Choo Choo's cult status, etc.

But I think I can top both of those.

I need two cards to complete my 1966 Topps Dodgers team set. One of them is #555 Ron Perranoski. It's also a high number and a short-print. For a long time, I had no idea it was an SP and whenever I'd see it at a card show (which wasn't often), I'd stare dumbstruck at the price on the card. Then my heart would sink because I knew I couldn't buy it.

However, 1966 Perranoski cards do seem to be pretty available for someone dedicated to finding one.

That card is the one shown at the top of the post. It's Rookie Stars card of the Dodgers' Bart Shirley and the Phillies' Grant Jackson. Shirley was nothing more than a utility infielder for the Dodgers. Jackson would go on to a respectable career for the Phillies, Orioles, Pirates. He was a decent pitcher, but not a superstar or even a star.

Certainly, his card isn't worth this price: 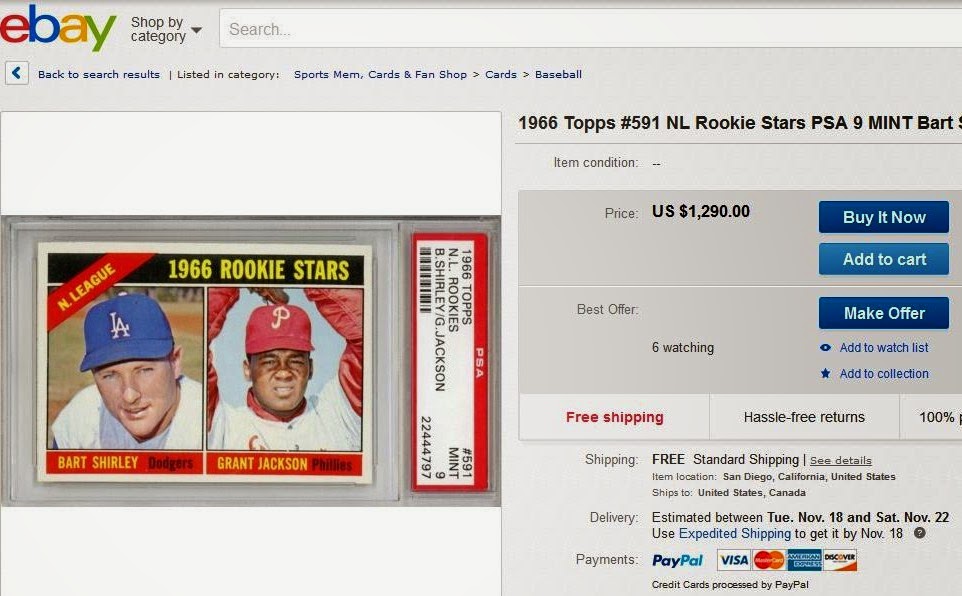 That is the ebay entry that I used to crop the image that's on the top of this post. I realize it's graded and all of that craziness, but come on, man, it's Bart Shirley and Grant Jackson!

Here are the 1966 Shirley-Jackson cards that are available on ebay at this moment.

There are fewer of that card available than both Choo Choo and Chi Chi and the prices are higher, too. The cheapest cards are $100 and $110 for non-graded cards (I refuse to use the term "raw", it implies that the card is "uncooked" and not in its most desirable form).

My best option right now is throwing $100 at that card.

Oh, have I mentioned that unlike Choo Choo or Chi Chi or Perranoski that this card is not listed as an SP?

It's not an SP according to a few different sources.

So why in the hell is it so expensive and unattainable?

There was a thread on the net54baseball.com forum several months ago about this very card and this very topic. Why does this card go for so much more than other high numbers? It doesn't make sense.

I was kind of disturbed by what I read on that thread because I couldn't find an answer. The only justifications were that "it's always been a difficult card to obtain" and "it has a cachet".

Those aren't answers to me. That's like when someone tries to explain why the gas prices are going up and they throw 13 different possibilities at you and you're still asking "yeah, but WHYYYYYYYYYY????"

Another disturbing thing: Some people are buying the card whenever they can find it cheaply just to have multiple versions of it. So apparently investors have discovered #591 of the 1966 set and are buying it for no other reason than perceived scarcity (did I mention that it's not an SP?) and "cachet".

Holy crap this hobby is insane.

This isn't a card from the 1980s when people bought up a ton of Jose Canseco rookies but since so many cards were printed there were still a million more floating in the air. This is a 48-year-old card.

This also isn't the only rookie card from the '60s that has given me a headache. Of course, there is the Ken McMullen Dodger rookie card in the 1963 Topps set. He shares that card with someone named Pete Rose. But at least it's Pete Rose, not Grant Jackson.

I haven't given up hope. I know someday I will find this card at a reasonable price. I'm sure some bloggers have it and they didn't pay $100 for it. (It's a relief that someone on the Net54 forum said he found one for 7 bucks and another for $35).

It's not a current mission of mine, but the more I gravitate toward vintage, it's only a matter of time. I'm sure I will obtain the Perranoski card next year and then that will cause me to start scouring the universe for a reasonable Bart Shirley-Grant Jackson card.

But I'll be shaking my head the whole time.

Mark Hoyle said…
I've run into a few of the same issues completing my 66 and 67 Sox sets. High numbers and short prints. Also I had to spring for a 63 that is also Willie Stagell rookie card just to get the no name Sox player
November 14, 2014 at 9:38 PM

Commishbob said…
I hunted for a reasonable Mark Belanger rookie (#558 of the high number 1967 series) for months if not years when I was trying to finish my Orioles team sets in the mid-80s. I finally found a guy at a show who had multiples cheap and I bought two. One went in the binder and one I framed as a 'souvenir'.
November 14, 2014 at 9:49 PM

AdamE said…
I never looked into why I don't have all the late 60s Red Sox yet I been concentrating on 50s sets. (And the T205 team set which I just finished this month, yeah!) But now that I look at my checklist I have many many high number 60s casts to get. And I thought 70 and 72 was bad. Late 60s looks even worse. Heck of Hoyle doesn't have them what chance do I have of getting them.
November 16, 2014 at 12:44 PM

AdamE said…
Ugh I haven't even started those yet. I have very few 52s at all. Hard for me to justify spending on them when that money can buy so many other cards. Plus 52 is like the ugliest set ever so not only are they expensive but everything else I can buy looks better.
November 16, 2014 at 3:43 PM

GCA said…
Son of a biscuit. I collect Grant Jackson and need one of these too!

This is why I hate graded cards. Hype-inspired inflation beyond reasonable levels of regular card values...should be high book of the regular card and no more...
November 17, 2014 at 9:03 AM