What's that you got on your head? 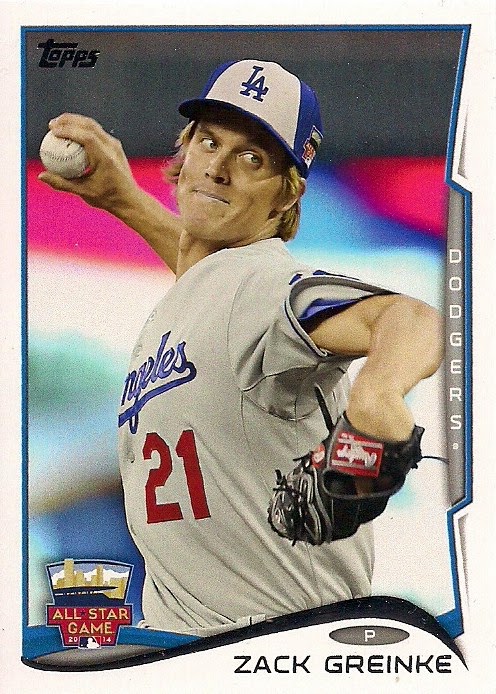 This card came in yet another trade with Cards on Cards. It features those abominations that Major League Baseball made all-stars wear on their heads this past season.

I am with everyone who hates these things. I hope they never appear again and wish like hell they were never captured on baseball cards. But here we are and I have this card of Zack Greinke looking goofy forever.

I'm guessing some folks don't like these caps because they either don't remember or didn't grow up with the multi-tone caps from the 1970s and 1980s. Those caps used to be a regular fact of baseball life, like stirrups, sansabelt baseball pants and bullpen carts (which also sometimes wore a cap).

Those caps didn't really bother me then. So I'm wondering why they bothered me so much when I saw them during All-Star festivities.

I think one of the reasons is because teams that never featured those kinds of caps, like the Dodgers, were suddenly wearing them.

The other reason only came about after I did some digging.

Back when these kinds of caps were a regular part of baseball wear, for teams like the Orioles, Expos and Brewers, most all of them were designed in a certain way. 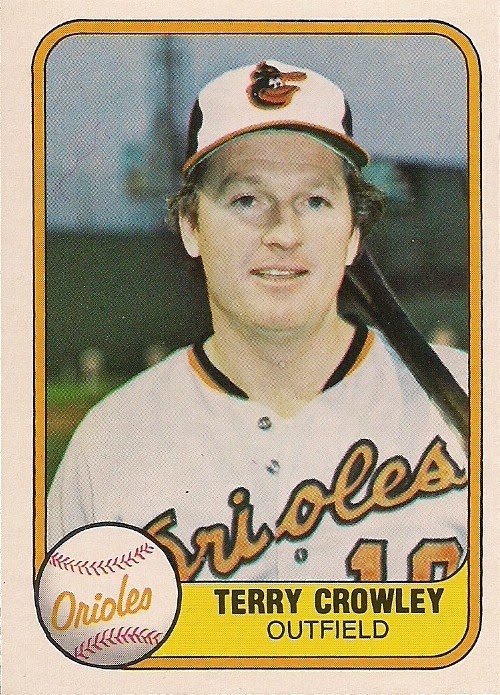 It may not be your fashion choice -- I know I prefer all one color -- but it's not hideous. Or maybe I just got used to so many teams wearing them: 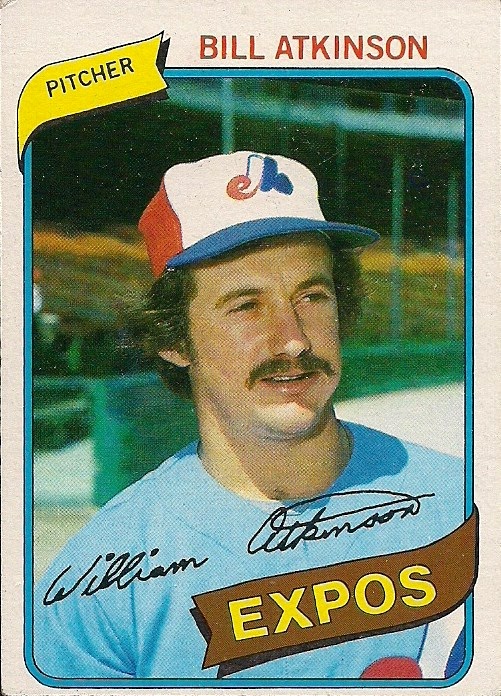 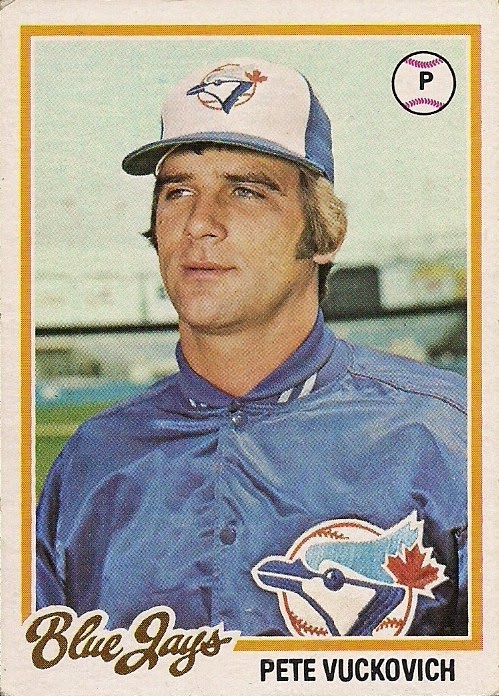 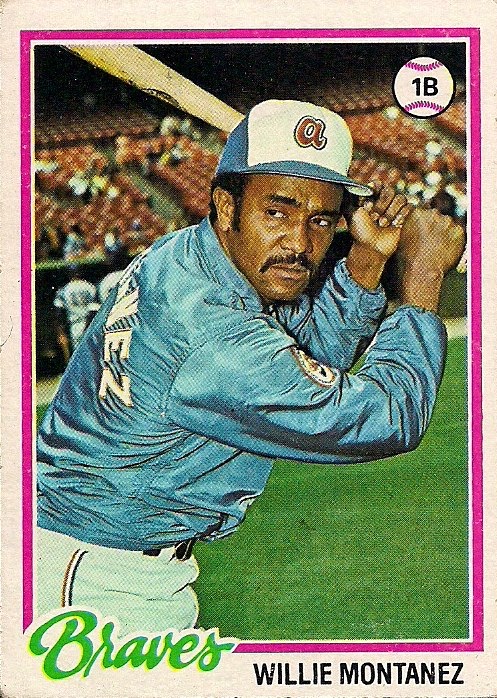 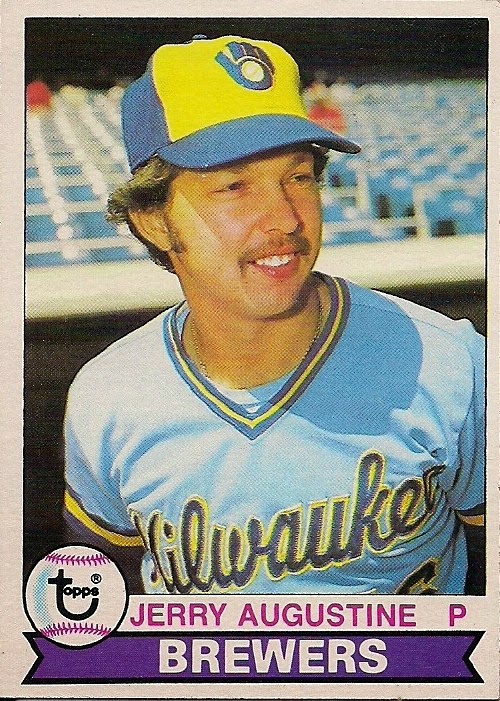 Each of them, although some used two colors and some three, went with the same style -- one featured color on the front and a different color on the brim and the back, adhering to the natural sectioning of the cap.

The All-Star caps used did not conform to the various sections of the cap like the ones used back in the day. Instead, it featured a colored triangle at the front of the cap that makes it look like all the baseball players are pizza deliverymen.

I don't know if these caps were supposed to be a tribute to the caps from the '70s and '80s or its own new "fashion statement", but if it was a tribute then they weren't doing it right. 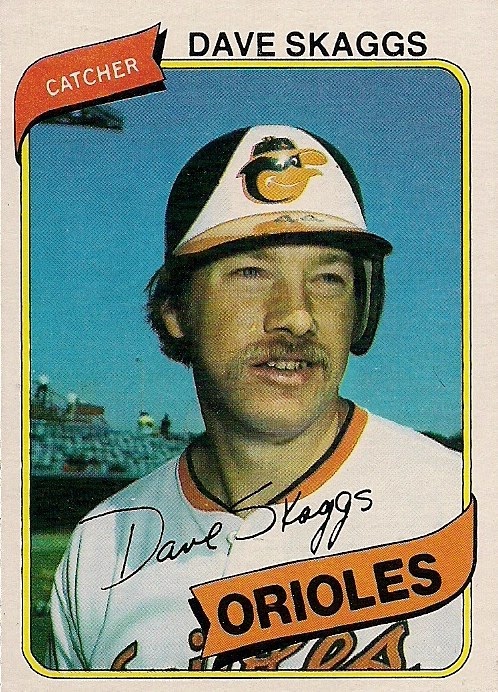 The only time most of those multi-tone cap-wearing teams featured the "front triangle" was while wearing helmets, which didn't feature stitching or panels. 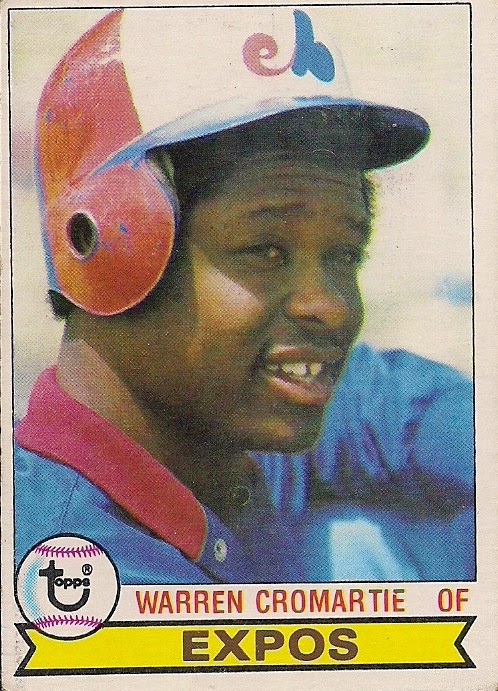 Although, as you can see, it could be done. And the Expos got it right.

But getting back to the caps, during my research, I did find one team that wore multi-toned caps back in the day that in fact featured the "front triangle."

Leave it up to the Padres. 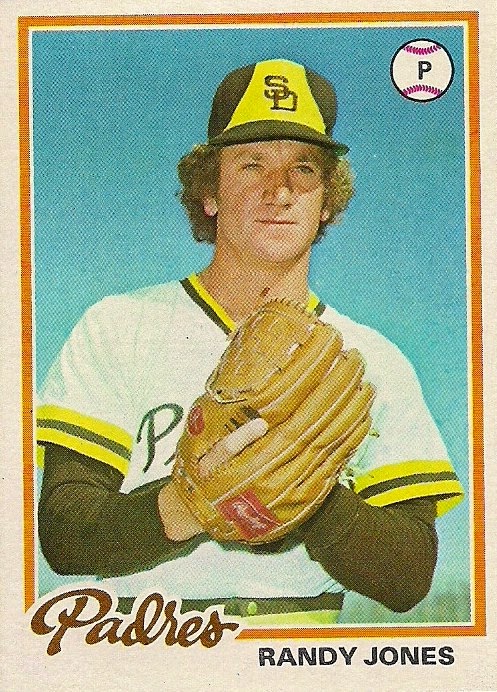 San Diego has always had difficulty dressing itself so I'm not surprised here. Perhaps this is what was used as inspiration for the All-Star caps, but really nobody should be copying the 1970s Padres -- on anything. 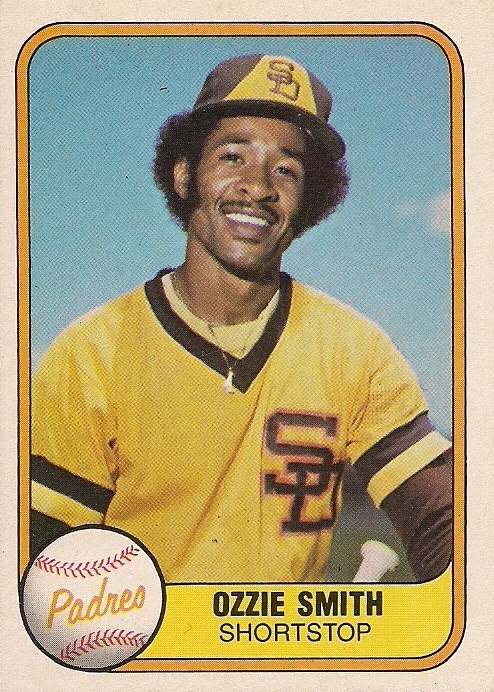 I don't particularly remember being alarmed by the triangle caps the Padres wore. But maybe it was because of the bright gold jerseys they were wearing. When a guy comes at you in chocolate and mustard, sometimes you miss what they're wearing on their head. 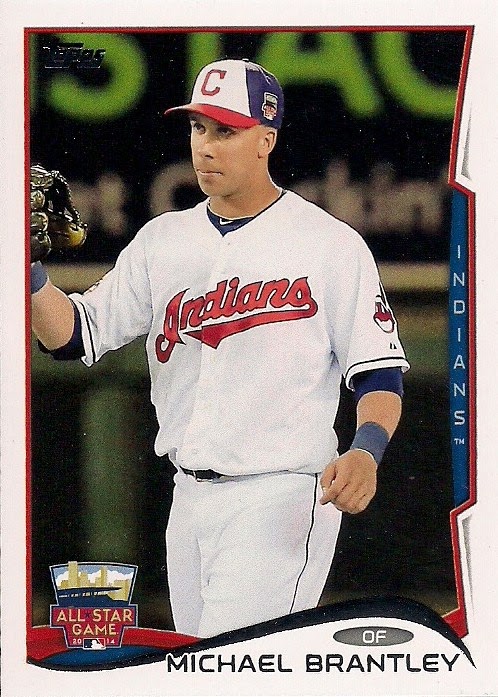 But in hindsight, it's not a good look.

And I hope it never comes back again. 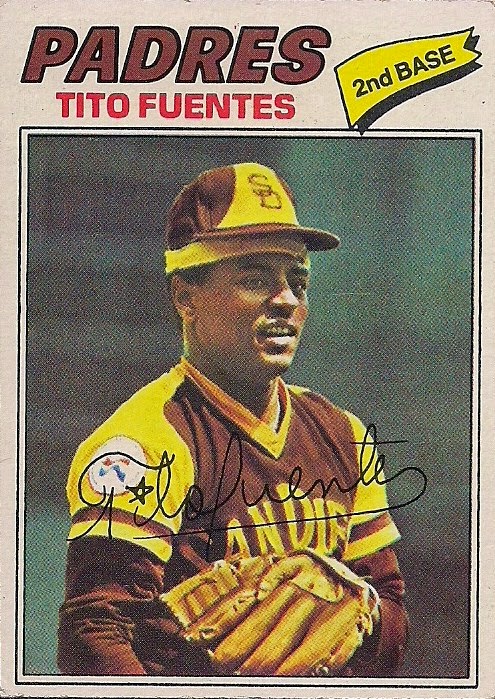 Sorry, Tito, the headband is only helping a little.

By the way here are some other cards Kerry sent: 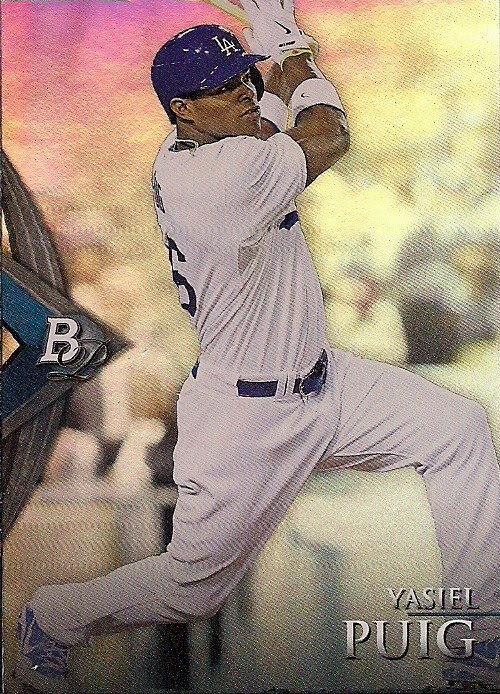 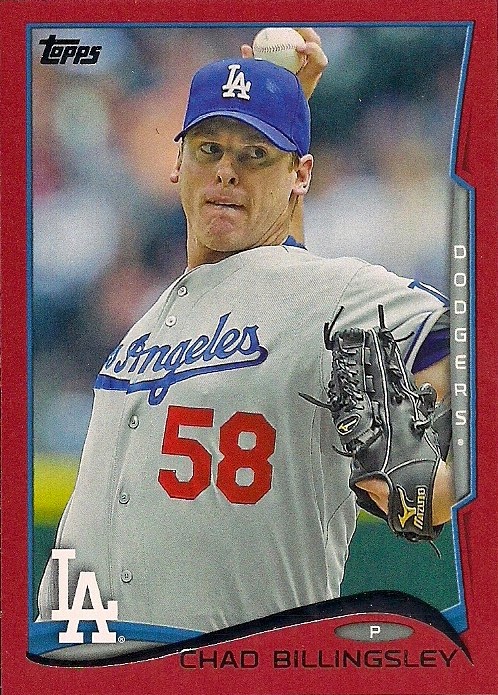 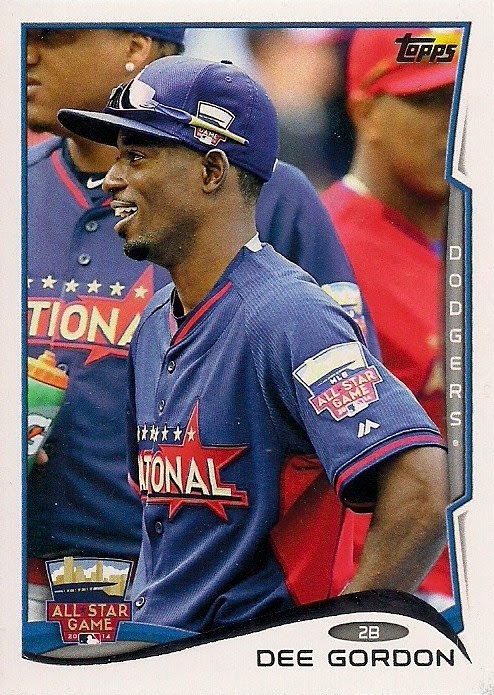 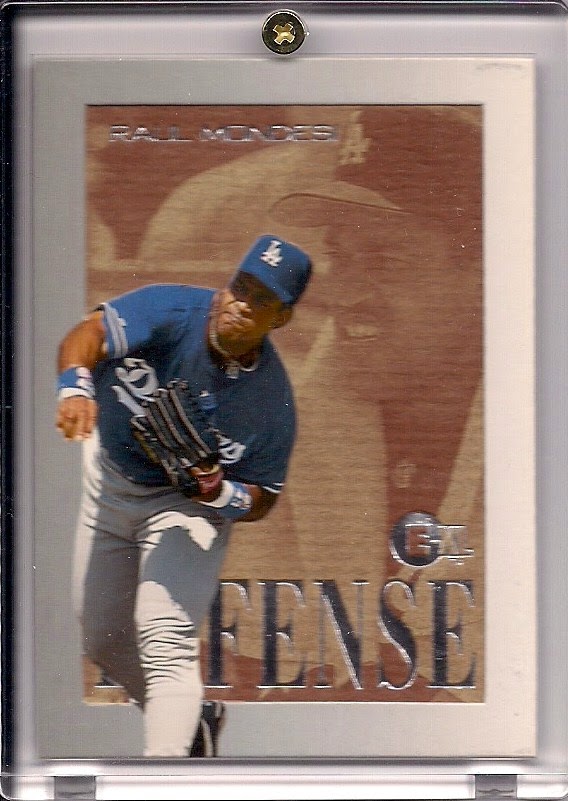 ... I left the Mondesi E-XL card in the screwdown because it cracks me up that it was in a screwdown.

JediJeff said…
First thought based on the title:

Anonymous said…
I'm with you all the way with these triangle billboard soft caps. It's not right and I really hate it. Which, I also thought was initially weird 'cause I loved it when I was a kid. I like the triangle look on a helmet though, 'cause the lines move with the curving of the helmet. It just works. That's why I don't like the current Orioles helmets, 'cause it's too blocky and completely misses the point. Although, oddly, the Expos helmets never bugged me. And yeah, teams that didn't wear 'em then, look weird wearin' anything like it now.
November 17, 2014 at 8:37 PM

AthleticGigantes said…
I agree with your observations. I was surprised with the A.S. caps this year and the Dodgers caps looked terrible. Actually they all looked terrible. There are some caps that should not be changed and the Dodgers cap is certainly one of them. I'm surprised there are not more comments submitted to protest the 2014 A.S. caps.
November 18, 2014 at 12:54 AM

Jason Presley said…
Pete Vuckovich without a moustache makes this post a winner!
November 18, 2014 at 8:39 PM

madding said…
I found the Mondesi card in a dime box, complete with screwdown (and inside a team bag to boot). Please be careful with it!
November 19, 2014 at 4:37 AM

gcrl said…
the hats were supposed to give a nod to the twins' batting helmets of the 1970's that joe mauer returned to prominence when he used the design for his catcher's helmet a few years back, according to the official mlb news release. as one of your readers has already mentioned, the look is better on helmets than these hats.

also, i am tempted to put some mondesi cards in screwdowns and send them to you to further your collection...
November 21, 2014 at 10:31 AM