I'm chasing these guys, too

December 02, 2012
A couple of months ago I speculated that I would complete the 2012 Allen and Ginter set earlier than any of the previous four A&G sets that I have completed.

Thanks to some beneficial trade packages that took out a bunch of wants late this summer, I was down to a few cards in no time.

But, of course, SPs have a way of extending every completion goal into a bloody, death march. It's like the Fear Factor with cards.

YOU WILL COMPLETE THIS SET AFTER YOU RUN THROUGH THIS OBSTACLE COURSE LITTERED WITH BEAR TRAPS, HOLD YOUR BREATH FOR 10 MINUTES WHILE SUBMERGED UNDERWATER IN A VW BUG, AND EAT 29 LIVE LARVAE OF THE EASTERN EYED CLICK BEETLE!

THEN, and only THEN, can you complete your set!

I'm not willing to do any of that. So here I still sit, two cards away from completion.

A couple of people took pity on my cowardly ways and at least got me down to those two cards. 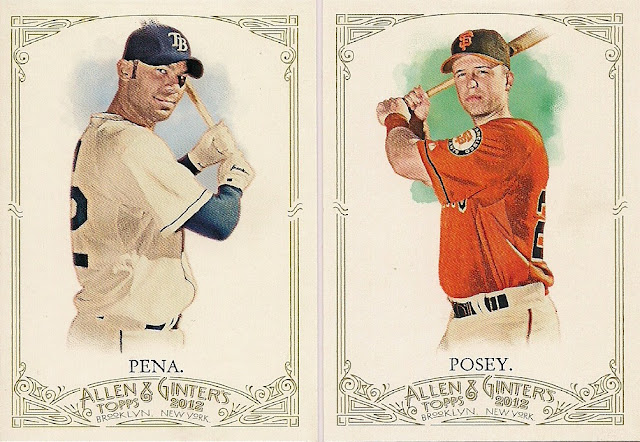 Jeff from 2 by 3 Heroes sent me Carlos Pena and Buster Posey.

Pena is a short-print but Posey is not. Posey was the last base card that I needed. Which means I can now say to this card, "You think you're so tough, Buster?"

Still can't get over that someone named their kid that. 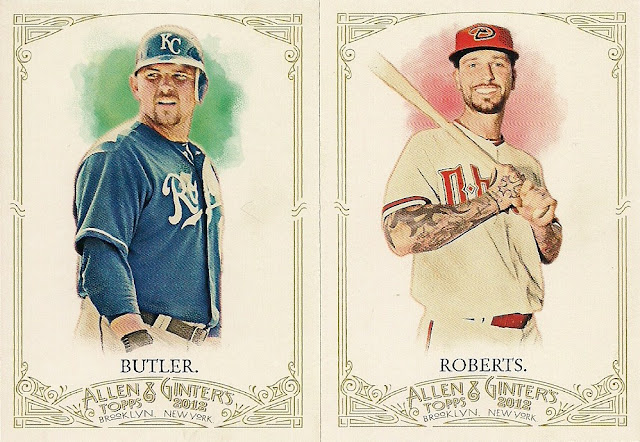 These two SPs came from reader Gary. He graciously sent me a couple of alliterative ballplayers, Billy Butler and Ryan Roberts.

Roberts is definitely not contemplating what tattooed hands will look like when he's 80 (or look like NOW for that matter). But he should be.

Butler is just flat out cool.

And that brings me down to the final two.

When I looked at the last two cards that I needed, it struck me that both of the players on the cards are free agents.

Here are the pesky elusives: 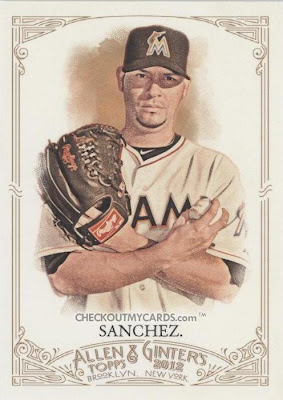 Anibal Sanchez, who could very well end up with the Dodgers. 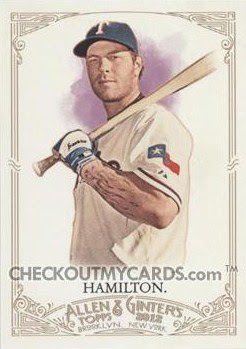 And Josh Hamilton, who probably won't end up with the Dodgers. But I wouldn't be shocked at all if it happened.

So, if you have been able to corral either of those two guys and don't want to hang on to them any longer, give me a shout.

You could be part of history.

Completing a fifth straight A&G set for me.

And completing the last modern set I ever finish.