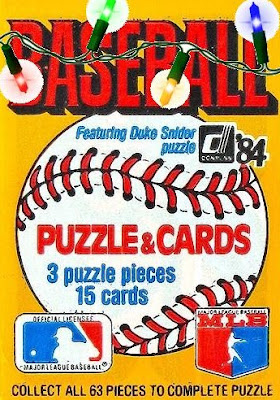 Merry Christmas, card collectors everywhere. I hope every one of you gets wax packs in your stocking.

I am hoping for the same for myself. But if it doesn't come to pass, I won't throw too big of a fit, because I have experienced my own Christmas cardboard miracle already.

I have completed the 1984 Donruss set.

Yup. This is no ordinary completion.

Because of this, it has been viewed as one of the all-time coveted '80s sets, both for the perceived scarcity and for the Don Mattingly rookie card.

I don't give a figgy pudding about rookies. But completing a set? Well that makes me as happy as an 8-year-old on Christmas morning. And completing the best Donruss set ever? Well, that is the best Christmas ever!

Now, probably the most polarizing thing I have ever said on this blog is that '84 Donruss is the only Donruss set that matters. For some reason this is an inflammatory statement to some people. I don't get it. But it's Christmas and I'm not going to get into it. You can read both the pros and the con about '84 Donruss yourself.

What I want to address is that I DONE COMPLETED THE ONLY DONRUSS SET THAT MATTERS, MERRY CHRISTMAS TO ME!

The person that owes a lot of credit for this feat is named David. He is a reader who contacted me not too long ago. He sent a bunch of cards. You should see everything that he sent -- and you will. Later. But the part that he sent that I'm celebrating today, while sitting around the Yule Log and munching on snowman cookies, is the 34 cards of '84 Donruss that finished off my set.

I'm going to show some of them here. And what better way to start it off than with the last three Diamond Kings cards that I needed:

Oh my. Where are my Christmas manners?

Now, as with most sets, often the last cards you need are cards of star players. This set was no exception. In fact, the vast majority of players I needed to finish off the set were stars, which is why I thought it would take me much longer to finish it off than it did.

So I'm very pleased to now have: 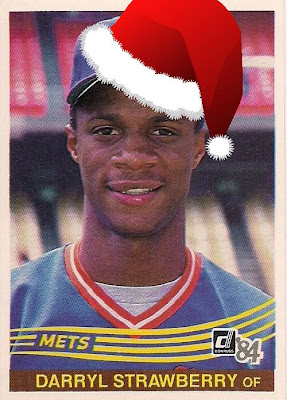 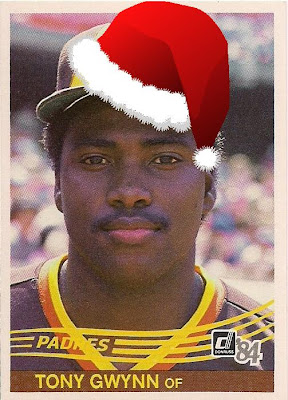 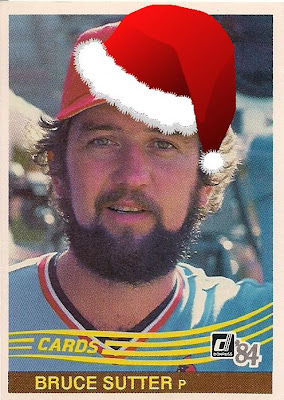 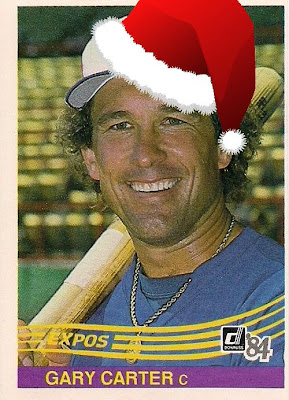 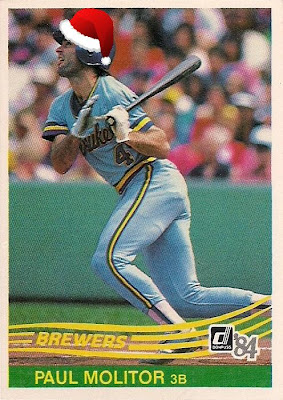 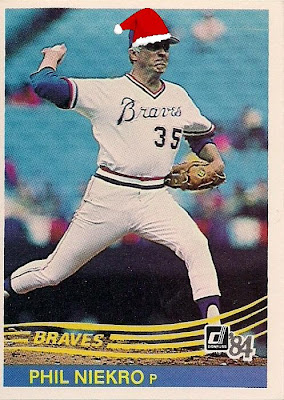 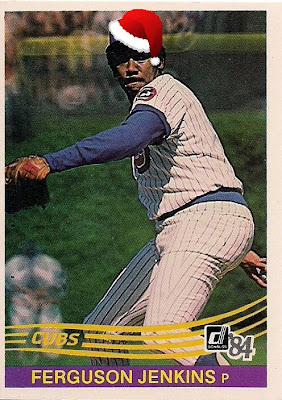 I also was happy to get cards of players who weren't necessarily stars but somehow eluded my grasp. 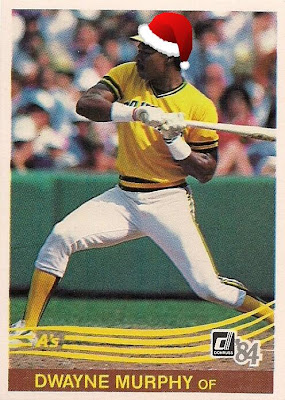 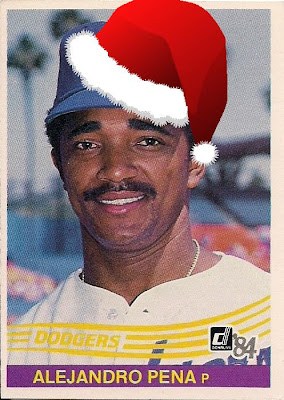 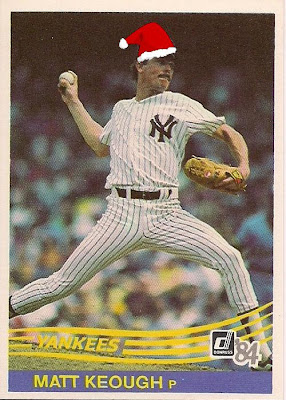 
And then there were cards of players who refused to submit to my horrific MS Paint skills. 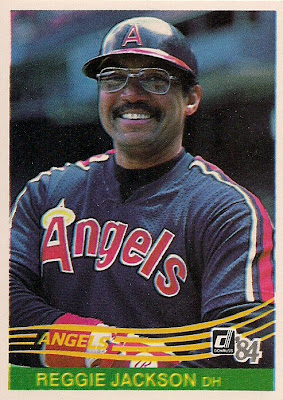 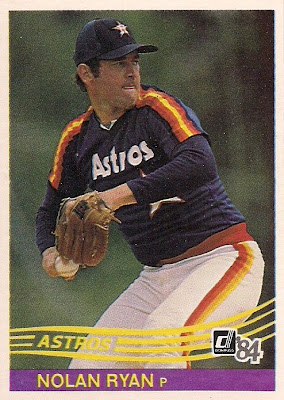 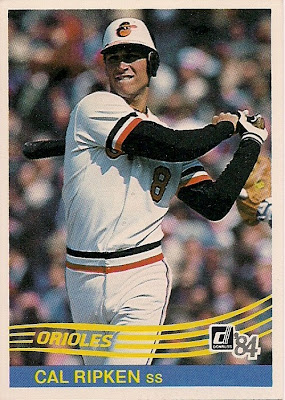 You all know their names. Party-poopers.

But they can't ruin my Christmas because my '84 Donruss set is COMPLETE! 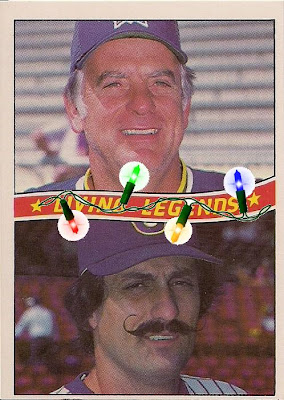 I even have both unnumbered Living Legends cards, too! 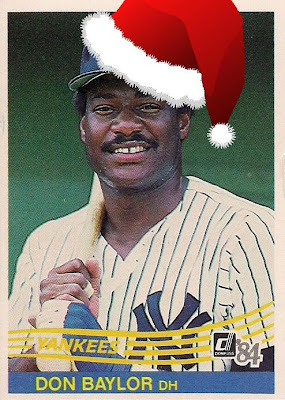 Yep, it's a very merry Christmas (Get a hat that fits, Don).

Finishing off this set not only means I was able to complete one of the more difficult '80s sets to wrap up, but it means I can put my full attention on other sets like 1972 and 1977 Topps and 2008 Topps Heritage, and all those stupid SPs and ...

I have the Don Baylor card already ... Crap. There it is.

That obviously means I screwed up typing in numbers on my want list. 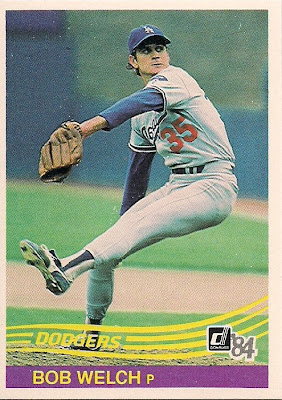 Well, this isn't that bad.

I have one Welch card already. It's in my Dodger binders. So that means I just transfer that card over to my '84 Donruss set and -- presto! -- the set is complete again!

But you can see I've already added the '84 Welch card to my Nebulous 9 list, which is a Nebulous 10 for the first time in history.

See? Not even a want list typo can ruin my Christmas Completion Spirit!

So, thanks to David for a really unexpected treat.

And a Merry Christmas to everyone once more.

That is, except for those of you who think, like, 1987 Donruss is better than '84 Donruss, and especially if it's because of the -- bleah -- rooooooookeeees.

A Merry Christmas To All.

And a happy collecting new year.

As you said, I never seem to be able to find them anywhere, so completing the set must've been quite the task.

Easily my all-time favorite Donruss issue. It's not even close.

hiflew said…
I'm still not a fan of 84 Donruss due to the sometimes unreadable team names, BUT I do recognize how iconic this set is. I think the sheer unattainability (there's a new word for Christmas) is what originally drove me away from the set.

Either way, congratulations on completing this task and Merry Christmas.
December 24, 2012 at 12:57 PM

jacobmrley said…
Merry Christmas to your and yours.

runfore!kelloggs baseball cards said…
Congratulations on finishing the set. I'd bet most of us mess up the numbers on our want lists from time to time. I did that today on a Kelloggs set of only 57 cards. I'm amazed at your luck of needing a Dodger that is already in your grasp.

Anonymous said…
Congratulations! I've started to gain an appreciation for 1984 over the past couple of years, partly because the design has grown on me, and partly because they are relatively scarce. I just acquired an 84D Ron Cey, which I'll post about in the semi-near future.

Robert said…
I can gladly say that I contributed one card to this magnificent feat!