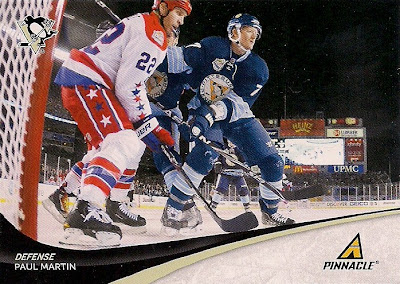 I've been periodically absent from the blog the last few weeks, mostly because of demands on my time. Today is a perfect example, as due to marathon work responsibilities, I am pounding out this terribly brief post in the 20 minutes I have for myself.

I am also trying to wolf down a very late lunch, pay bills and miserably fail at answering my daughter's homework questions all in the same 20 minutes. So if you point out any typos in this post, I'm not your friend anymore.

Anyway, I thought choosing a night card of an absent sport would be appropriate given my situation.

This card was provided by Sportscards From The Dollar Store. It's from last year's Panini Pinnacle set. It commemorates the days when the NHL used to do cool things like hold games outdoors, at night, in front of fans, on ice, and play hockey. You know, all those things it doesn't do anymore.

What the NHL has inflicted upon itself is pathetic. Even if it somehow cobbles together an abbreviated season, I don't understand how anyone would still be interested. The NHL has effectively killed itself. They've pulled this stunt twice in 10 years, and can kiss its chances of ever being considered a "major sport" goodbye (I'm told that was a goal once upon a time).

Too bad, because I prefer hockey to basketball, and often prefer it to football.

But that's what happens when you go AWOL. Twice.

I promise I won't do the same.

I should be back to regular posting in 24 hours or so.

AdamE said…
As far as I know there is no Sosa and McGwire waiting to save hockey when it comes back either.
December 21, 2012 at 9:14 AM