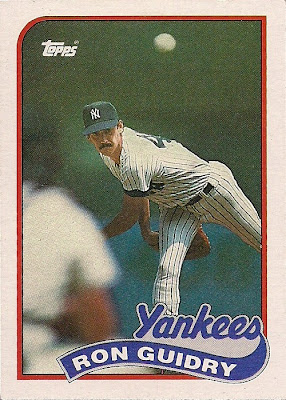 It's time to figure out the best card for each team of my next complete set on the list, 1989 Topps.

Unlike the previous two sets I reviewed, 1991 Topps and 1993 Upper Deck, 1989 Topps is not known for its great photos. This set is at the tail end of an era in which Topps sometimes featured action shots and sometimes relied on standbys from the 1960s, cheesy, posed shots and portraits. Once Upper Deck and Stadium Club hit, a lot of that went away.

In fact, when I was going through my '89 Topps binder, I found myself looking at the cards in a different way than I had with the more recent complete sets. Instead of valuing action and creative new photography, I started admiring a player's smile or someone looking up in the dugout, because that's ALL YOU HAD back then.

Once again, I broke the teams up by the divisions that existed at the time. AL East, AL West, NL East and NL West. (By the way, I excluded from contention the team leaders cards from this set. There are actually quite a few, nice action photos on these cards, but I didn't want to consider subsets because I didn't do that for any of the other sets).

I have yet to sit on the floor for any of these exercises. In fact, I think I'm backsliding. Instead of going through the cards at the dining room table like I have for the others, I looked through my '89 binder while slumped in a chair watching "The Muppet Movie" on Netflix.

Somehow that seems appropriate for '89 Topps.

Here are the cards: 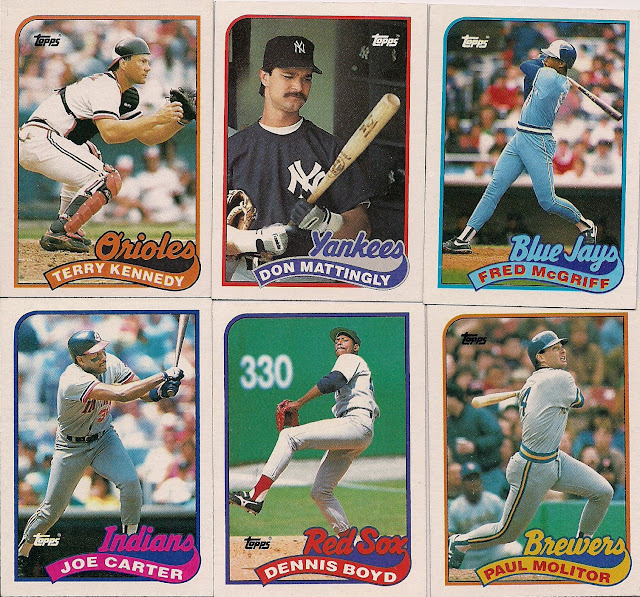 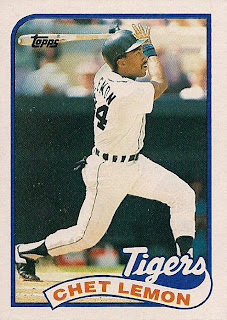 Team with the best cards: Red Sox. This is the sixth time I've done this series and the Red Sox have had the best cards 4 or 5 times. I'm trying to be impartial here, so even though I like the Red Sox, I'm pretty sure it's an objective evaluation.

Team with the worst cards: Tigers. They just edge the Blue Jays. For a long time I thought Sparky Anderson standing in the dugout was going to be the Tigers' best card.

Team I should go back and review: Blue Jays. I like the McGriff, but a lot of the Jays cards were similar. 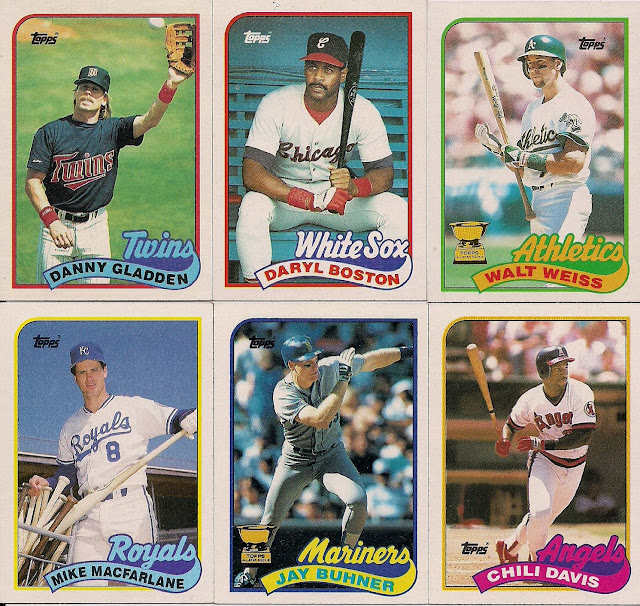 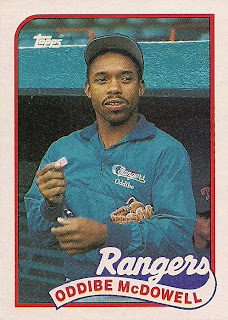 Team with the best cards: A's, probably. This was a weak division. White Sox and Mariners were OK, too.

Team with the worst cards: Angels. Lots of static shots.

Team I should go back and review: Royals and Rangers. I got transfixed by all the bats and the gum and blanked out on everything else. But I am still obsessed with the gum that McDowell has. If it is a piece of Topps gum, kudos to Topps for the product placement. If it is another brand, kudos to Topps for displaying a competitor. 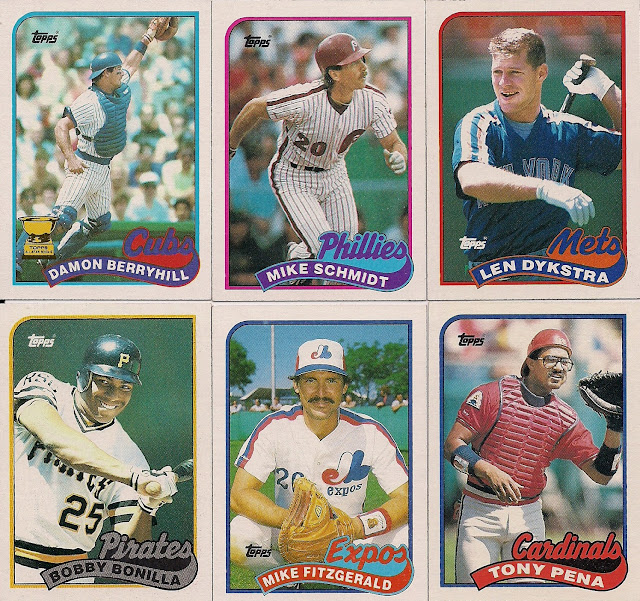 Team with the worst cards: Mets. They have lot of action shots but they're all so boring. Guy standing at plate waiting for pitch. Whoopee.

Team I should go back and review: Phillies. Mike Schmidt historically was given lousy photos by Topps. It's shocking to me that there is a Schmidt card that is halfway representative of what he was known to do. 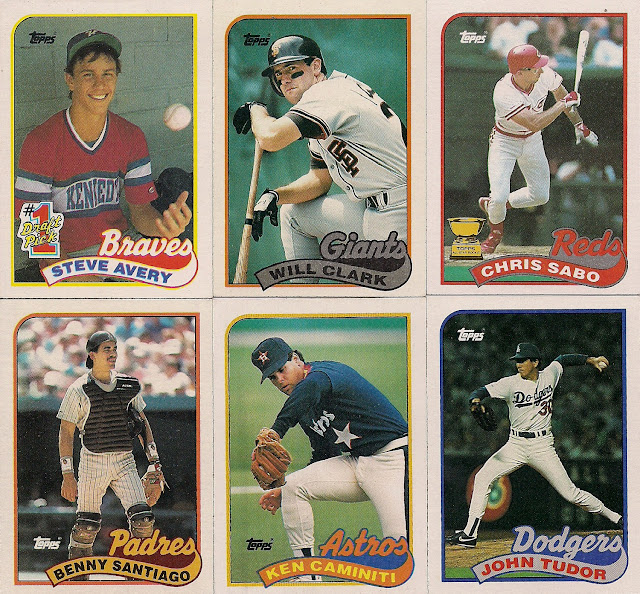 Team with the best cards: Reds. Some good stuff, but it couldn't beat Spuds.

Team with the worst cards: Braves. The Avery card is borderline iconic. I was relieved to finally come across it at card #740 in the set, because before that, I was embarrassed for what I'd have to choose for the Braves. That said, I think picturing players in their high school uniforms on cards might be what got our hobby rolling downhill to the point it is at today.

The Padres cards weren't great either.

Team I should go back and review: Did I actually choose a Will Clark card as the best at anything? Clark with the squeaky voice and the personality of every character on "Survivor" that you hate? Yes, I did. (The Mike LaCoss card, in which he's showing his grip, is pretty good, maybe I should have picked that).


You may have noticed that four players with rookie cups made it as the best. I think Topps tried extra hard some years to give nice photos to its rookie cup players, and '89 Topps had a good crop of rookies.

So, there you are. Proof that you can find "the best" in a set where maybe photography wasn't at the level that we demand today.

hiflew said…
I'm glad you picked the Damon Berryhill. I have always thought that was the best overall card of a very unremarkable set.

I also love the Oddibe McDowell, but not for the gum. I love the shirt that doesn't say baseball player. It says that Oddibe works for the Rangers' garage.

Marcus said…
The Gwynn from the '89 Topps set is probably one of the worst Gwynn's ever. Not a lot of great Padres in the set, but I also liked the Mark Parent and Greg Harris cards.
December 21, 2012 at 8:55 PM

night owl said…
Well, I'd like to hear what's better. I briefly looked at the Floyd Youmans card, but every other Expos card looked no different than anything else.

I documented the "Rock" phenomenon here:

Commishbob said…
Random thoughts.... Dan Gladden looks like Gary Busey in Rookie of the Year.... Mike Schmidt looks pretty small for a guy with his power... Caminiti got a lot bigger. I played golf with him once and he had some pretty awesome tattoos on his calves, and he hit the absolute crap out of a golf ball.... Len Dykstra ALWAYS looks obnoxious.
December 22, 2012 at 1:28 AM

Anonymous said…
For the Expos I'd of gone with the "Bob" Rogers, edging out the Psacual Perez and "Rock."

I also don't think you can go wrong with any one of the ones featuring players in the red BP jersey, especially the Wallach, which is the best action shot Topps ever gave him. I love those red BP jerseys, and I'm pretty sure you've touched on that subject here before as we'll.

Anonymous said…
Interesting to compare my write up on this with yours. I do it completely differently, but I had the Bonilla and Schmidt as my top cards. I like the Schmidt, but I also like that it's his last card. It's true he didn't have many good Topps photos - he won "best card" in 2 of my sets. 1989 and 1986, which I think I would consider the 2 most mediocre sets photo wise I've done.

That Sabo is good, too. I still like the Eric Davis better. But I may be blinded by the fact that he was my favorite player at the time (though I think Spuds was probably a close second).
December 25, 2012 at 1:40 PM