Cool non-cards (plus some cool cards) 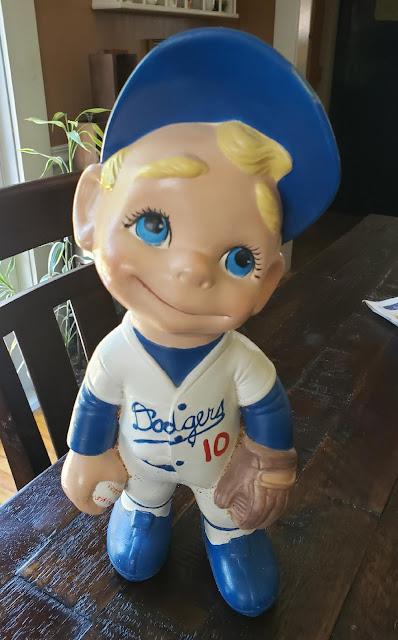 I tell myself I do not have the space, nor the time or money, for non-card collectibles.
I shun bobbleheads and Funkos, keychains and other trinkets, bats, balls, jerseys and other assorted placemats and pillow cases that Koufax or Drysdale might have dined off or slept upon.
It's a good act I put on, and in a way, it's helped cut down on the clutter ... a little.
Because, truthfully, I think some of that stuff -- that non-card stuff -- is pretty cool.
I dug the above "baseball boy" out of a box in the attic just now. No, I don't exactly think it's cool. It's kind of adorable and creepy at the same time.
It was painted by my mother, back when she went to ceramic classes when I was 14. She made a Dodger-themed one for me (yes, Ron Cey's number!), a Red Sox-themed one for my brother and an Oriole-themed one for my other brother. We didn't really know what to do with them. So we put them on a shelf in our bedrooms and ignored them for years while their eyes bored a hole into our soul each night. When we went to college, there they stayed, with no one to haunt.
I almost forgot I still had it. Since my mom has passed, I figured I should display it somewhere. The card room is kind of full -- no non-card collectibles you guys! -- but it should get a spot -- outside of voodoo-staring distance, of course.
This is just the latest "new" non-card addition that needs a spot in that room. Here are a handful of others. 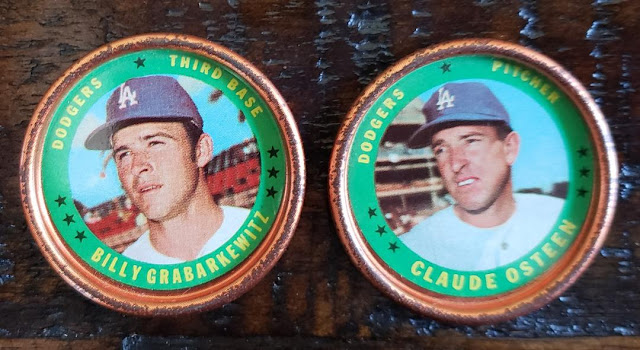 All right, these are no problem at all to store. I even have pages for them, although usually I end up plopping them in that Cody Bellinger tin on my desk.
I received these from reader Ben, the former co-worker I wrote about a couple times prior. These are Topps coins from 1971. For whatever reason I've owned Dodger coins from '64 and a number of those '80s ones but never '71s. I need to figure out what I have and -- god help me -- am I going to put up a coins want list??? 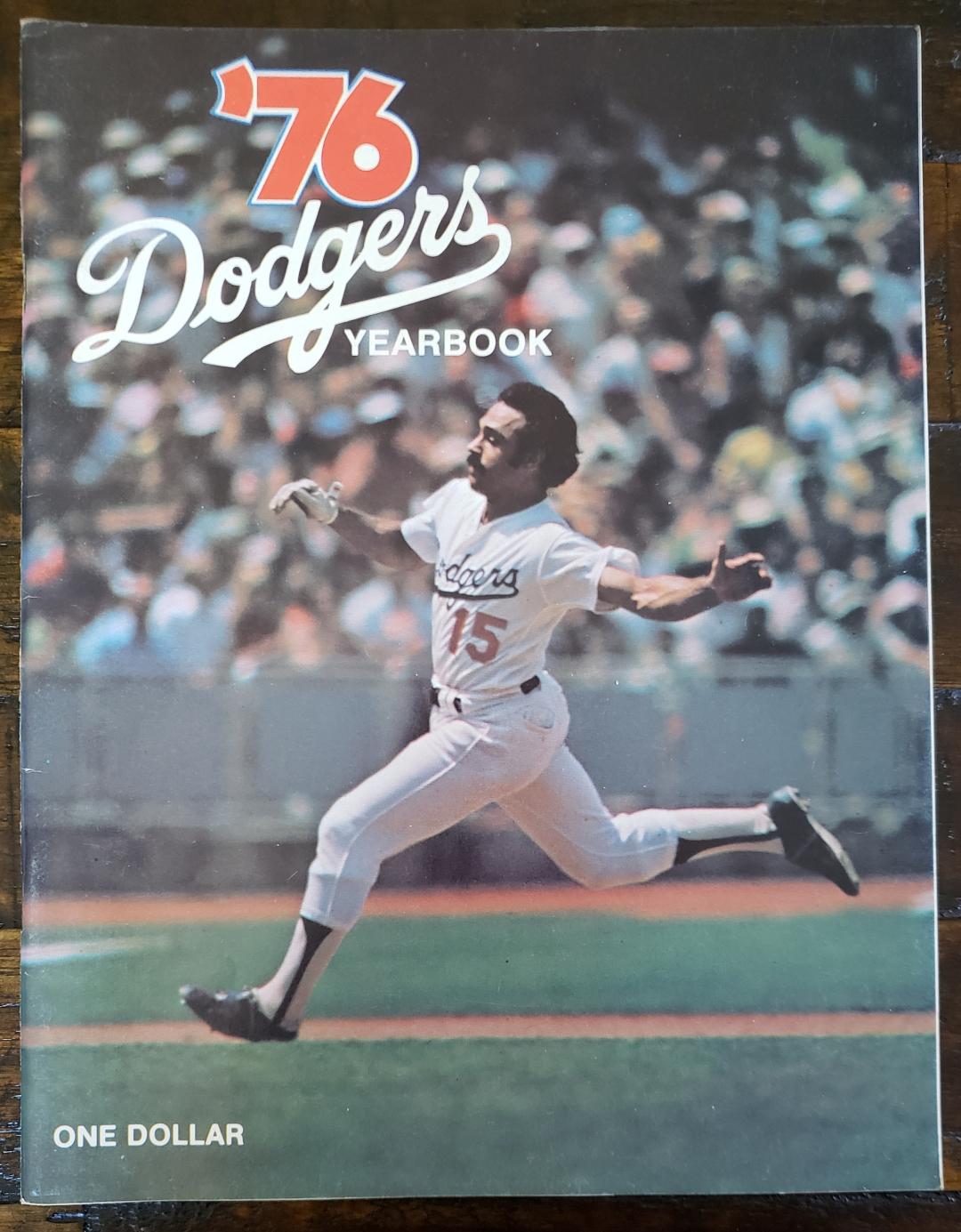 Speaking of co-workers, former or current, one of my co-workers just came back from vacation. He was cleaning some of his stuff out of his parents' home and dug out some appropriate programs for me and another worker.
I own the 1976 Dodgers program already, although this looks like it's in much better condition.
But the condition and nature of the next periodical almost knocked me out of my chair. 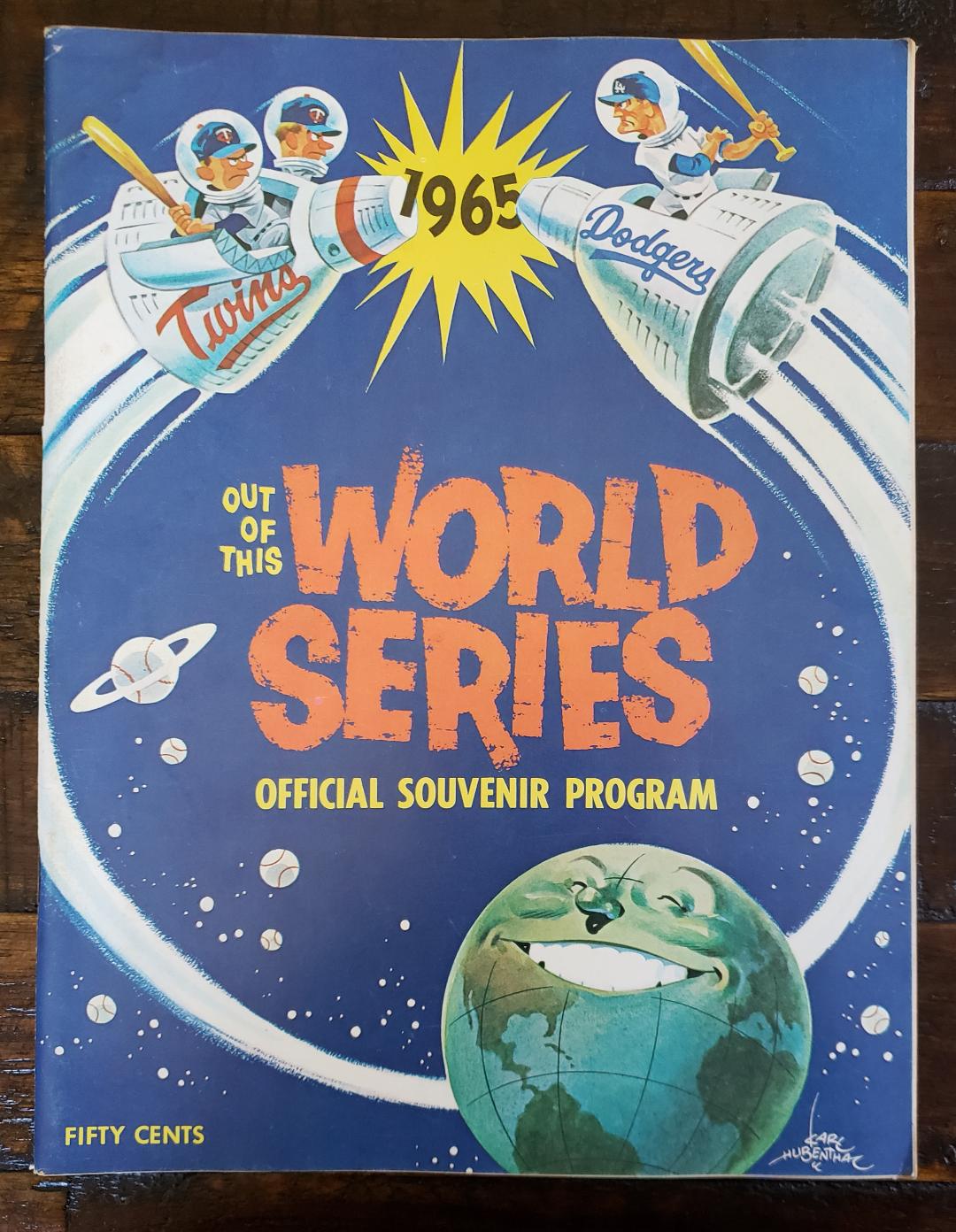 That is one of the most iconic World Series programs ever made. I have wanted it for a long time, not just because of the wonderful, whimsical and time-appropriate cover created by sports cartoonist Karl Hubenthal, but it's a Dodgers WS program issued the same year that I was born!
It's also in terrific shape for a 50-year-plus program. That automatically set off alarm bells considering I had just been informed a month or so ago that the 1956 World Series program I received was a reprint and who the heck ever heard of yearbook reprints??
I'm pretty sure this is the real thing though. If you open it up, there's obvious signs of wear, although the wear is very mild. There is some water damage on the back cover and a couple pages inside. Also, my co-worker, who is older than me, found this back in the '70s at a flea market/show, I doubt they were selling reprints there or at the time. 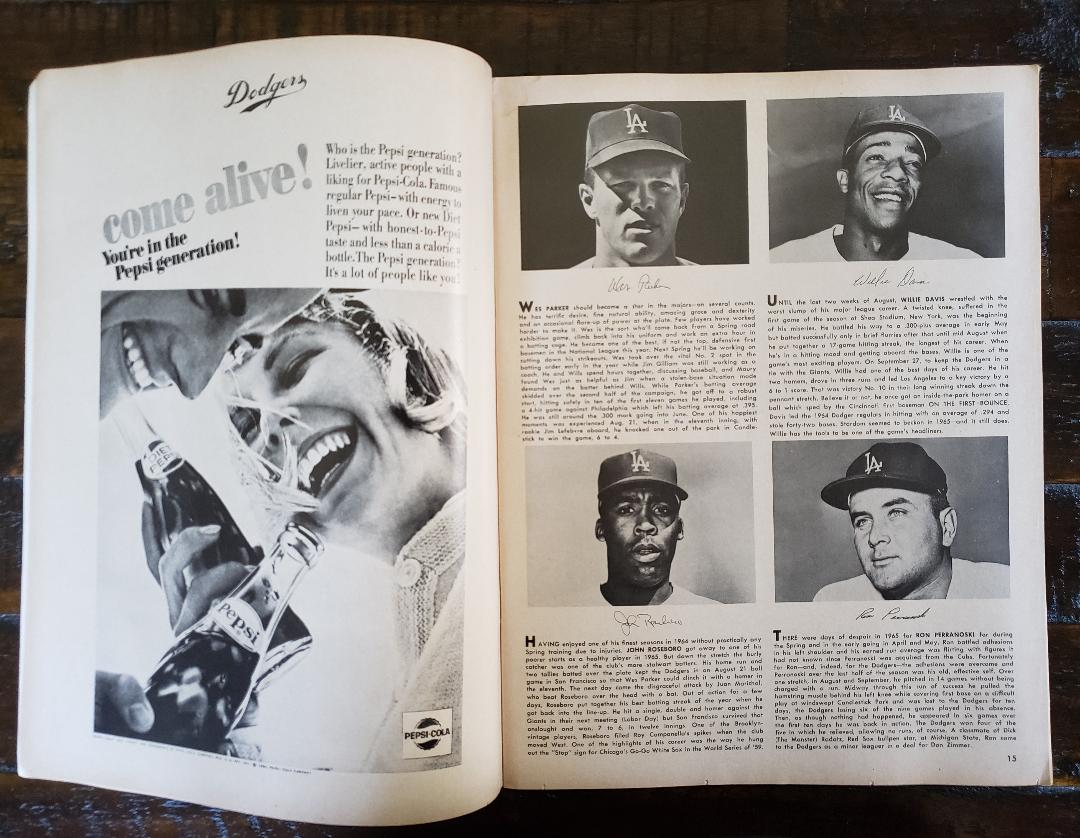 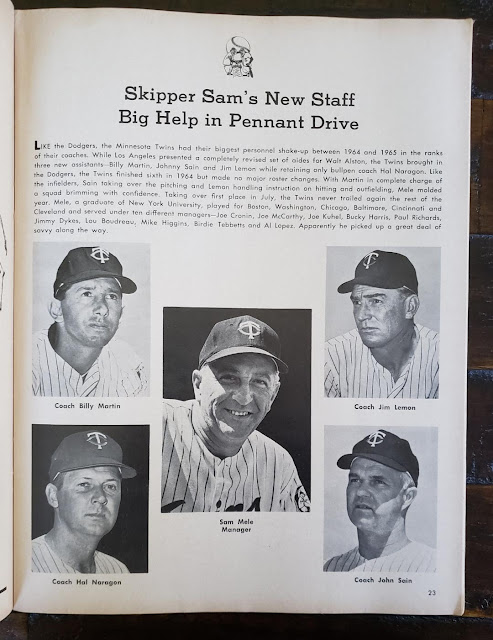 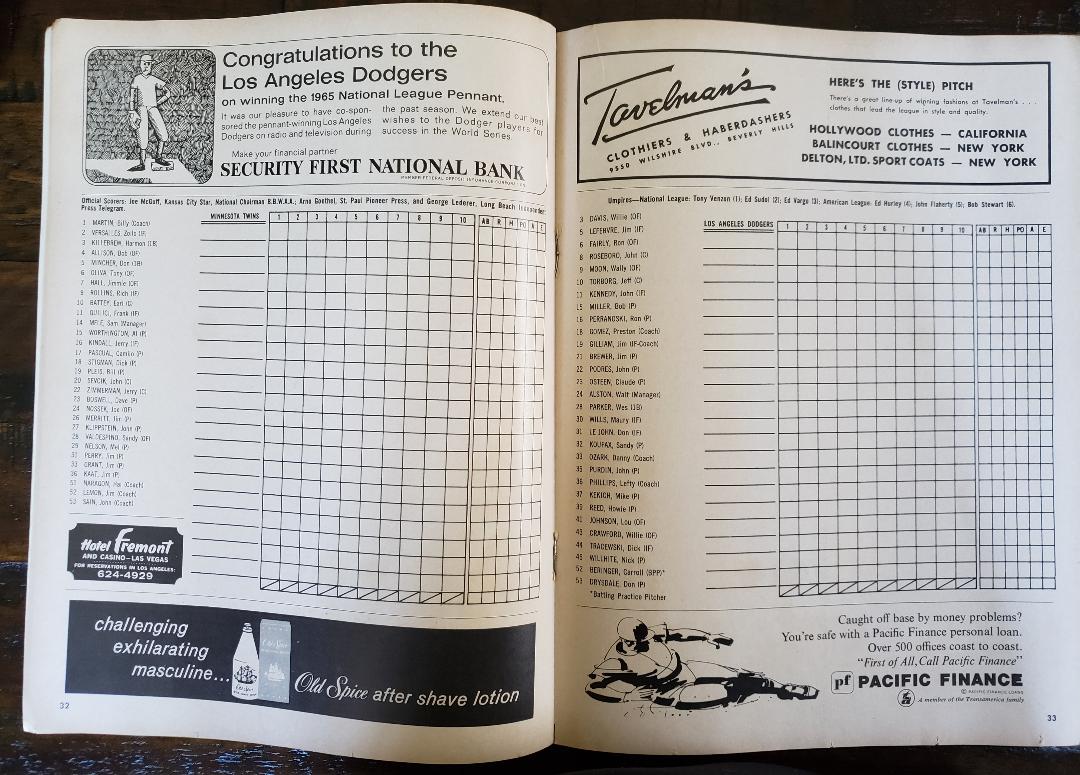 Although the cover is exceptional, the inside is pretty standard '60s stuff. It's still wonderful to look at, of course, I love seeing the scorecard lineups and Billy Martin staring down the photographer.
I have several other World Series programs that involve the Dodgers but I was pretty sure I'd never get this one. I will definitely find a place for this non-card item in the card room. 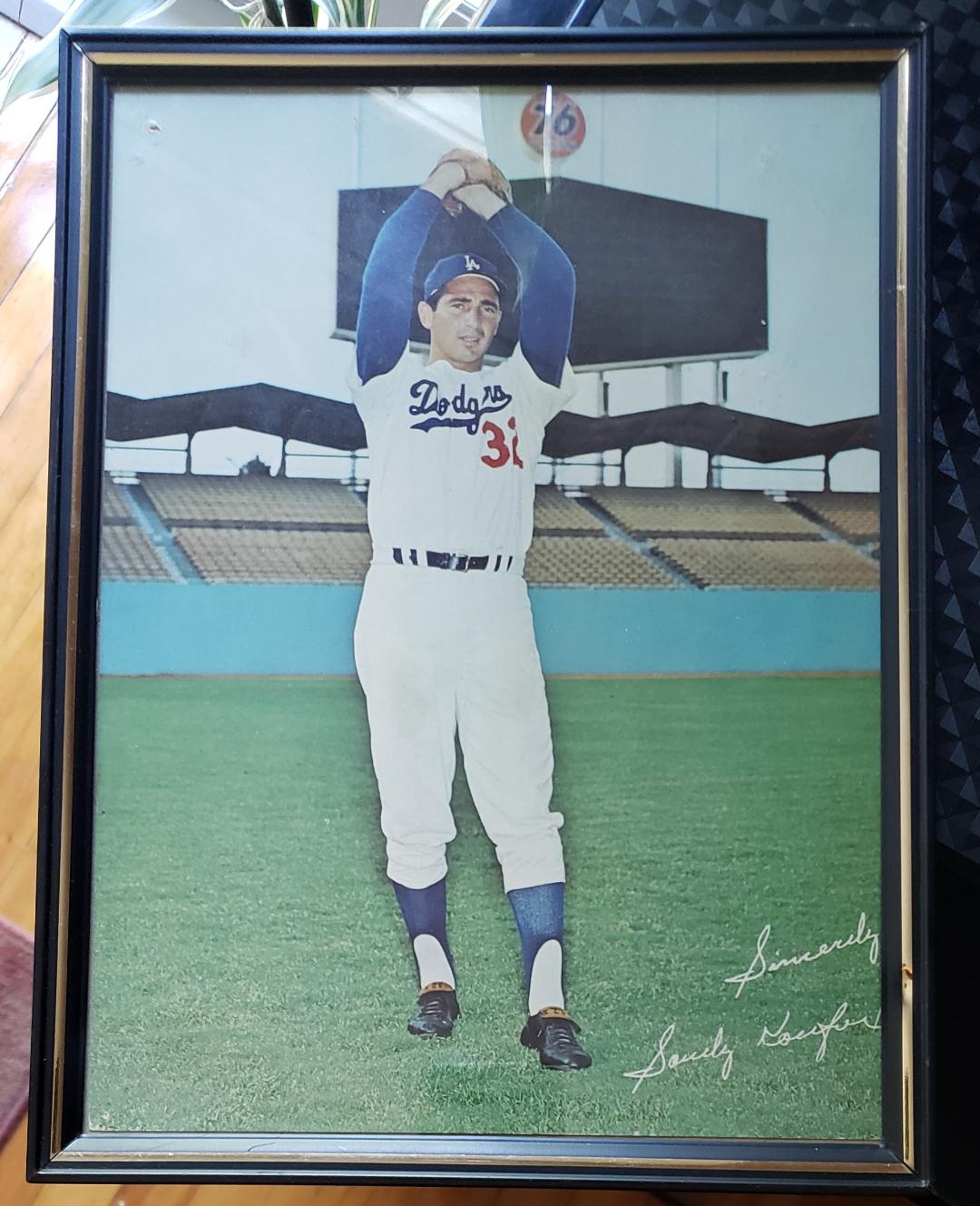 Final non-card item for today.
This was also a flea market find, from Jeffrey of Cardboard Catastrophes!
I believe this is one of those photographs that the Dodgers handed out to fans back in the '60s and someone slapped a frame on it because, dammit, that's what you do!
This means I need to find wall space for it. I think I've got a spot in mind. I'll need to jockey things around to do so, but if you're not willing to make adjustments for Koufax ...
Both Ben and Jeffrey sent some cards along with the non-card things. 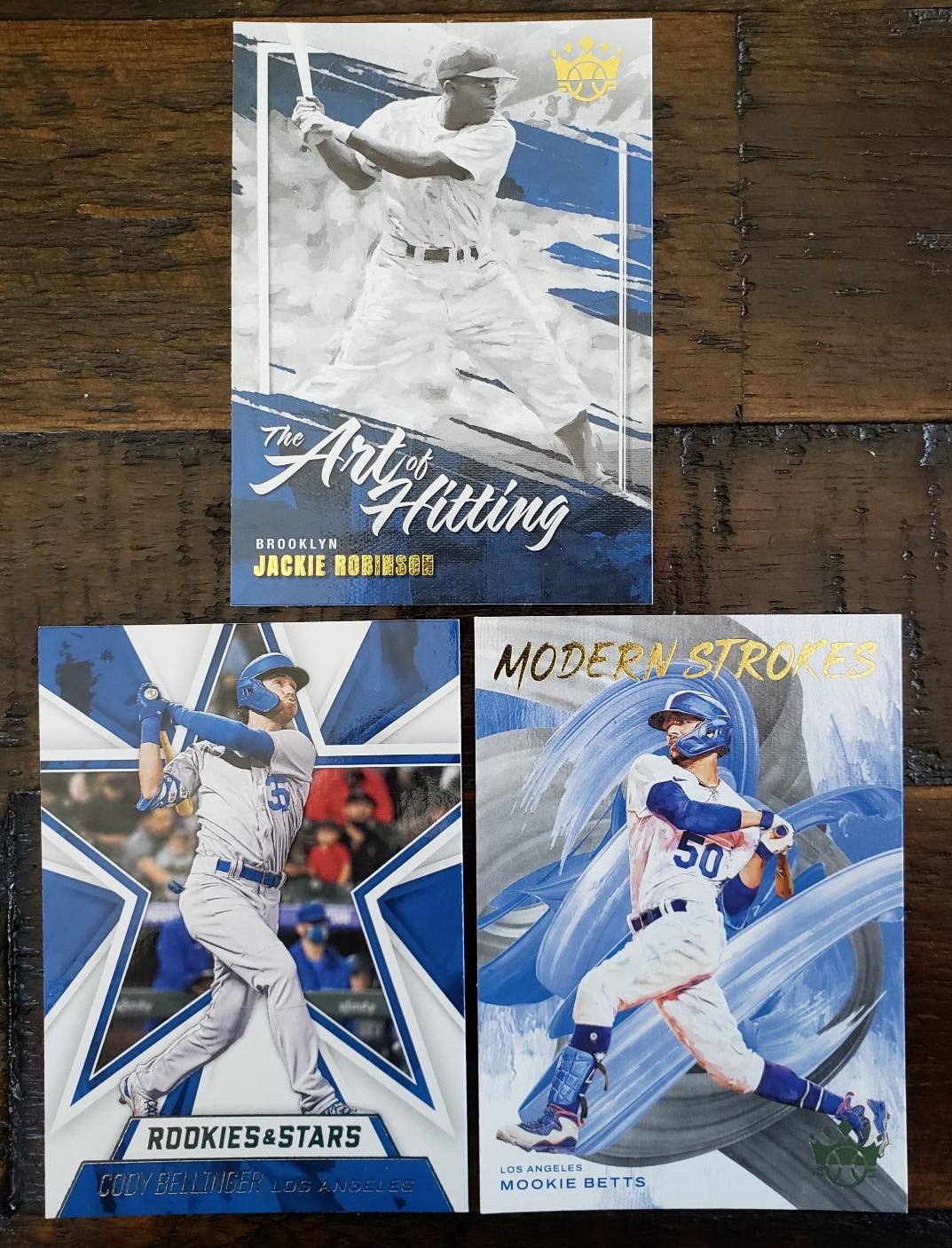 Ben's been dabbling in some Panini products. Much appreciated from this team collector who remains deluded and thinks he can accumulate all the Dodgers. 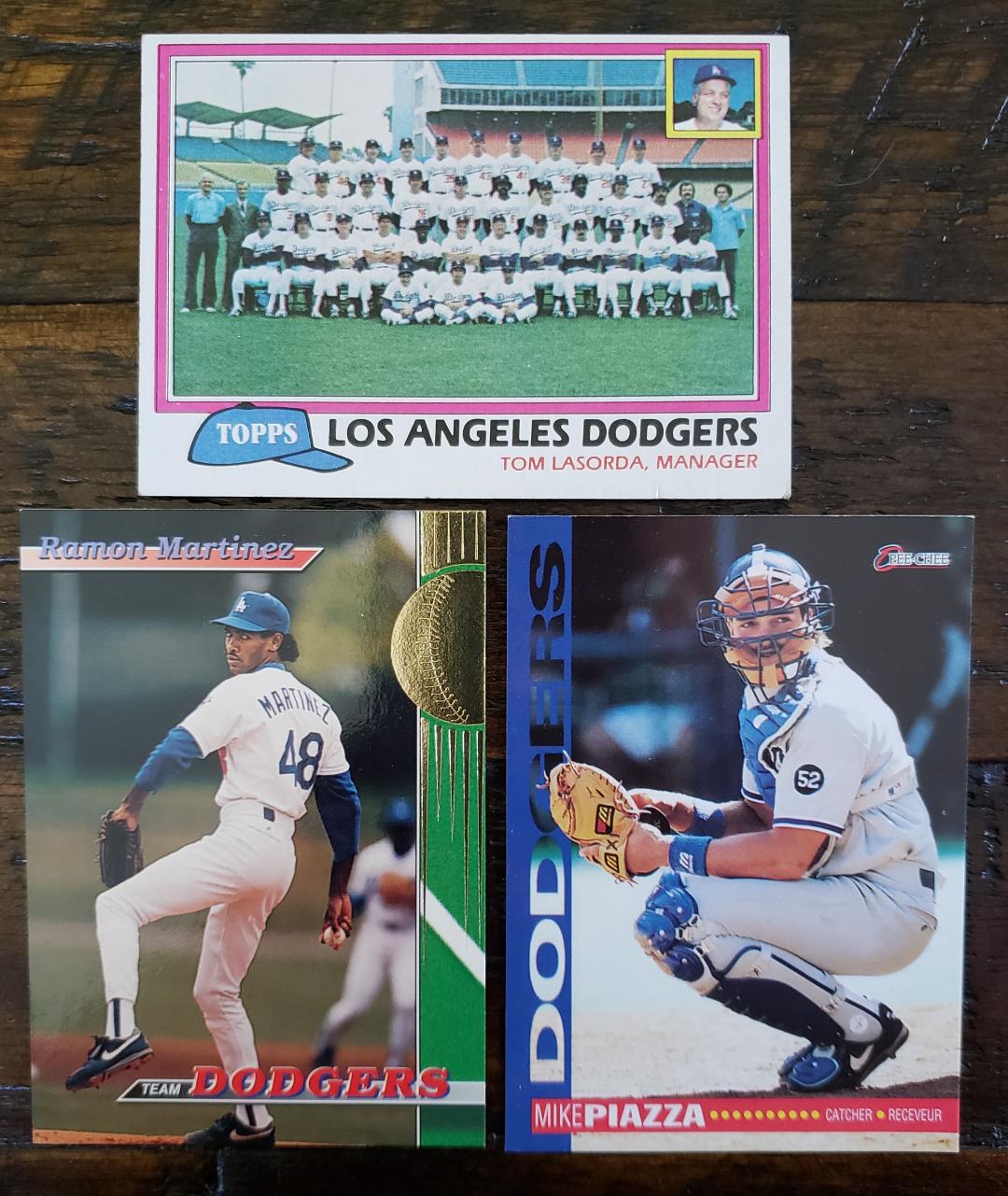 These I have, although anything as old as 1981 Topps makes me think of upgrade possibilities.
Jeffrey, meanwhile, sent a trifecta of 1967 Topps needs.
I haven't done much with the '67 set at all this year, thanks to prices soaring, it makes me not even want to check what's out there for something as old as '67. So I really appreciate these. 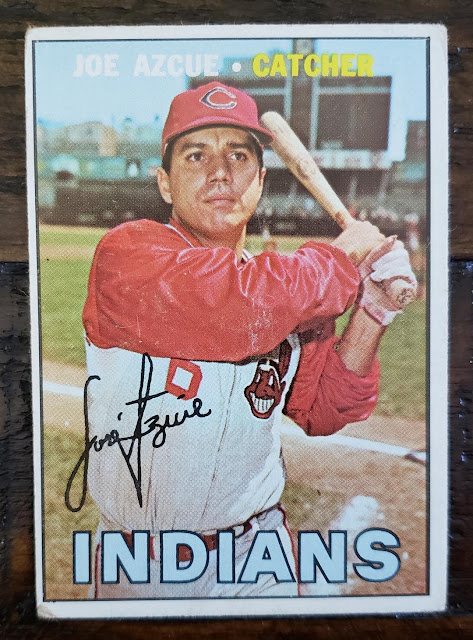 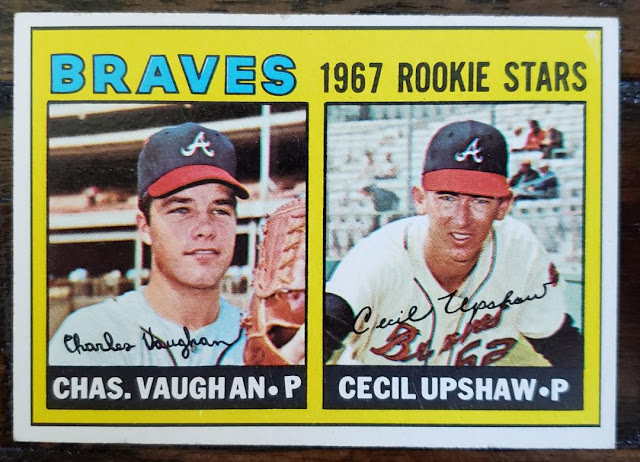 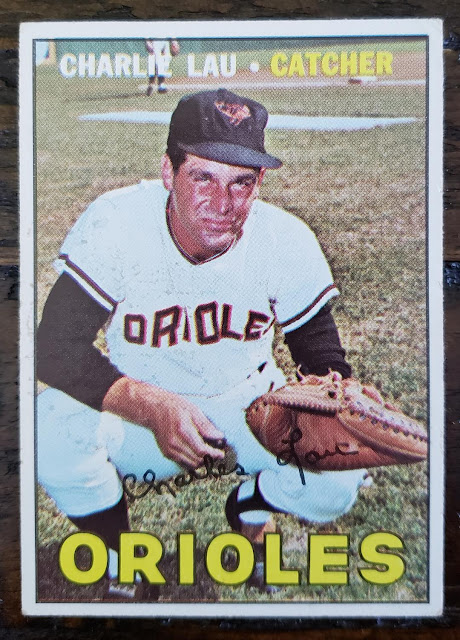 Can't wait to add these to the binder. I always know where card stuff is going to go.
But sometimes it's necessary to squeeze in some of those other things. 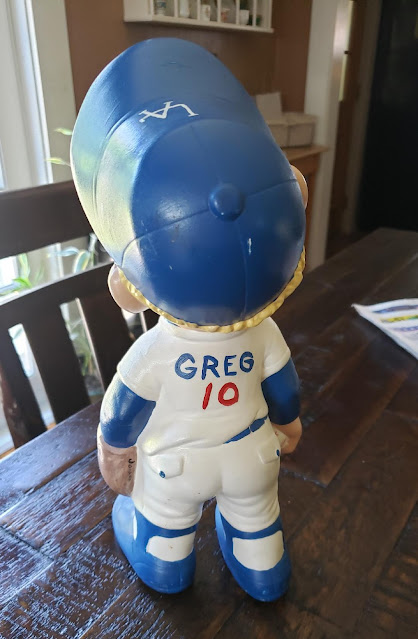 Maybe I can face this toward the wall.

Billy Kingsley said…
I'd imagine that the little guy statue would have some sentimental value. I have a ceramic Christmas tree that my grandmother made before I was even born, was probably made in the 70s.

I have tried to cut my collecting down to just cards and diecast for NASCAR. I used to buy everything I ran across that I could find and now I have a full storage unit to show for it that's such a mess that I can't ever find anything when I want to.
June 24, 2022 at 8:58 PM

Laurens said…
I think that statue is adorable and was even personalized by your mother on the back.
June 24, 2022 at 9:20 PM

Old Cards said…
MLB programs have always been interesting, because we had them when we played Little League. Thanks for sharing the one from 65. I can see why you are going to find room for it. I have some old World Series and All-Star programs that I ordered through the mail, but they are in a storage container in the attic along with a bunch of baseball magazines. At this point, it's all cards for me.
June 24, 2022 at 10:25 PM

Jim from Downingtown said…
That is Charlie Lau's final card. Interesting that he did not catch during his final 2 seasons, but was used as a pinch-hitter only. (Same for Smokey Burgess, whose final card was also in 1967.)
June 25, 2022 at 12:28 AM

carlsonjok said…
My mother was in ceramics class at the same time, however I got a football player painted up like a Dallas Cowboy, who were my team at the time. That figurine is long gone, though I do have the Christmas tree she made.
June 25, 2022 at 9:10 AM

Grant said…
That's a great program. Few historians are aware, but the Twins didn't actually want the '65 title anyways because it was haunted.
June 25, 2022 at 4:00 PM

Nick said…
I have to almost willfully *not* collect non-card stuff because it just takes up too much space - space I don't have given how much room my cards take up. I love a lot of what you showed here (especially those yearbooks!) but I've come to terms with not having a lot of that kind of stuff in my own collection.
June 25, 2022 at 9:57 PM

Nick Vossbrink said…
Love that 95 program even though it's Dodgers. I really ned to figure out a better solution to storing my programs. Magazine files aren't ideal but archival boxes ain't cheap.
June 25, 2022 at 11:44 PM

Fuji said…
When I first returned to the hobby... and was converting my spare bedroom into an office... I was buying up a variety of bargain non-card items for display purposes. These days, I've run out of space and do my best to avoid non-card purchases (but they still occur periodically).

That hand painted figurine from your mom is such a cool item. You and your brothers should bring the to every family reunion... so the figurines can hang out and stare at each other.
June 26, 2022 at 10:45 AM