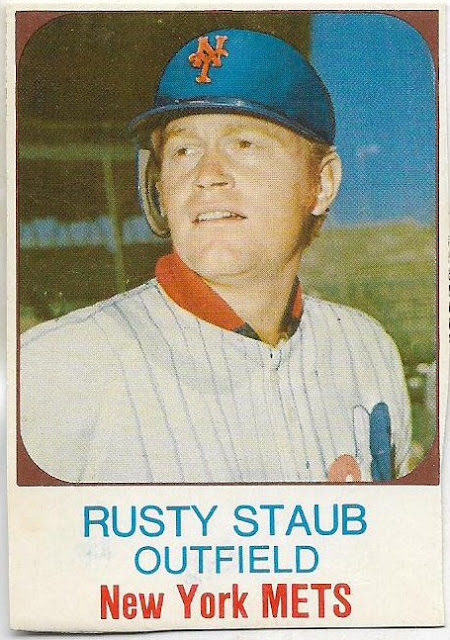 Woo, baby! It's starting to feel like 2009 around here with the amount views I'm racking up, except without the tight blogging community atmosphere of 2009!
The blogging enthusiasm seems to be at an all-time low in the card world, the card boom that caused my readership numbers to soar has subsided, and this is the time when people take off for vacations and such. The crickets are loud. BUT I'M STILL HERE!
Because the cards never go away, you guys.
So, for whoever's left, we have another weekly vote to tackle. I'm happy to report that the wonderfully weird Rusty Staub Hostess card claimed the latest win and is the sixth card to advance to the next round in the quest to add another card to the Cardboard Appreciation Hall of Fame.
Thirty-six votes got the Expos/Met into the next round. The tally:
1. 1975 Hostess Rusty Staub - 12 votes
2. 1975 Topps Jim Wynn - 10 votes
3. 1990 Score Joan Jett custom - 6 votes
4. 1982 Fleer Cal Ripken Jr. - 6 votes
5. 1980 Topps Ed Farmer - 2 votes
6. 1951 Topps Blue Back Bruce Edwards - 1 vote
7. 1990 Little Sun Roger Kahn and 1975 Topps mini Ron Santo - 0 votes
OK, quickly, here are the candidates that you're voting on for the next round. Some decent cards this time around. 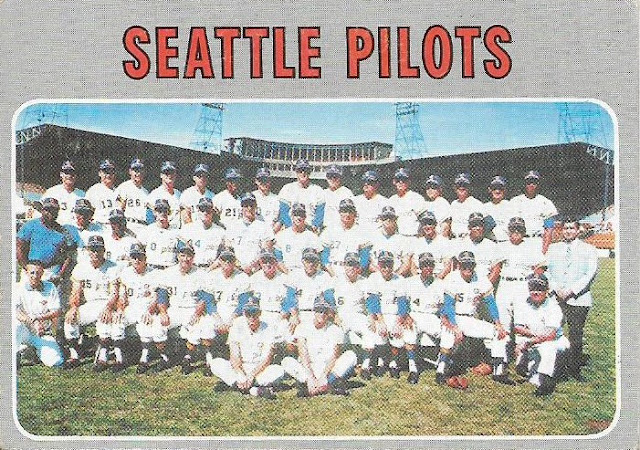 1. 1970 Topps Seattle Pilots team card
A wonderfully unique card, it is the only team card issued of the Seattle Pilots. It's also a high number in the 1970 Topps set, meaning it's both not easy to obtain and also that the team was already the Milwaukee Brewers by the time it appeared in packs. 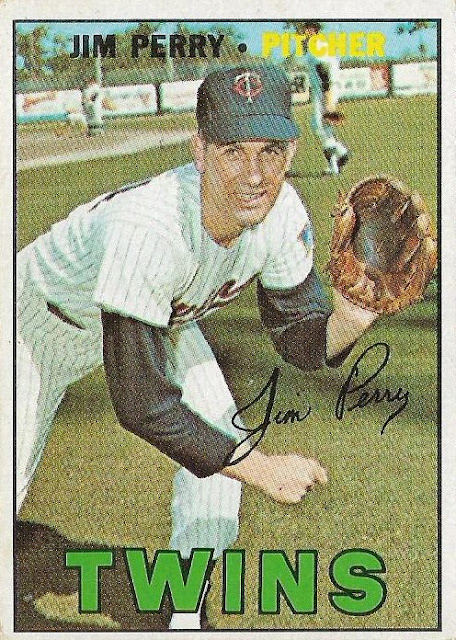 2. 1967 Topps Jim Perry
I've written many times how '67 Topps presents an eye-opening window on the world of late 1960s baseball. It's quite the contrast between the sets issued now where Topps is always trying to eliminate stuff in the background. 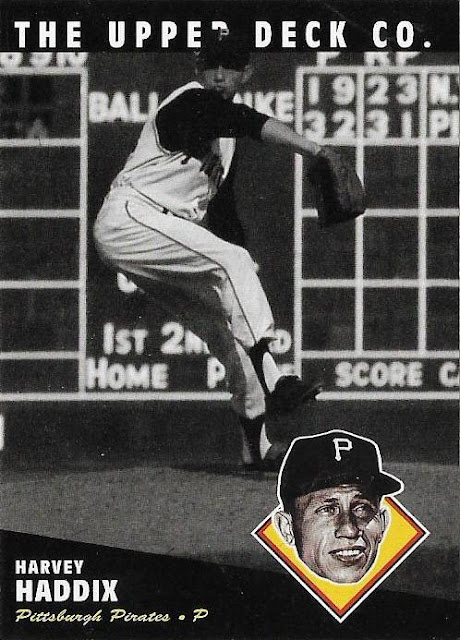 3. 1994 Upper Deck All-Time Heroes Harvey Haddix
This card is part of my no no-nos collection, cards that feature pitchers who once had a no-hitter but had it taken away by the MLB rules change of the definition of what a no-hitter is. 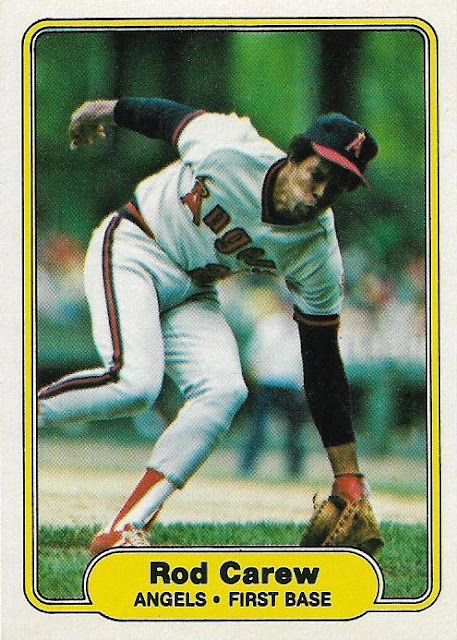 4. 1982 Fleer Rod Carew
I have been fascinated by this card since 1982 when I read in my Baseball Card Magazine that the same image appeared in both '82 Fleer and '82 Topps. 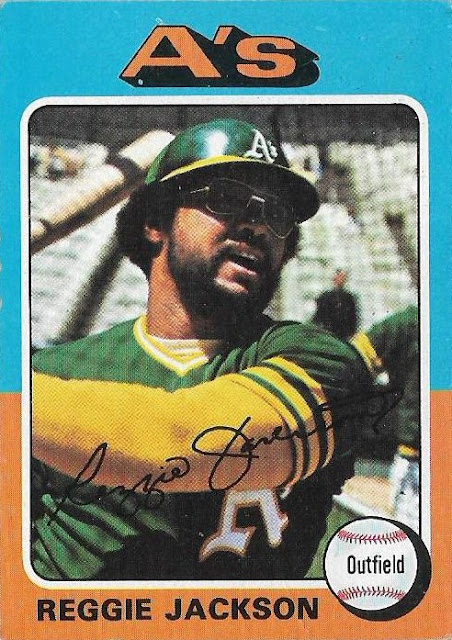 5. 1975 Topps Reggie Jackson
I knew what a great card this was in 1975. I also knew that the All-Star starters in the previous year received yellow-and-red borders with a giant position star. The question is, was I aware that Jackson was an All-Star starter in '74? Because I had no idea that yeae that Jackson was gypped out of receiving that epic All-Star treatment in '75 Topps. 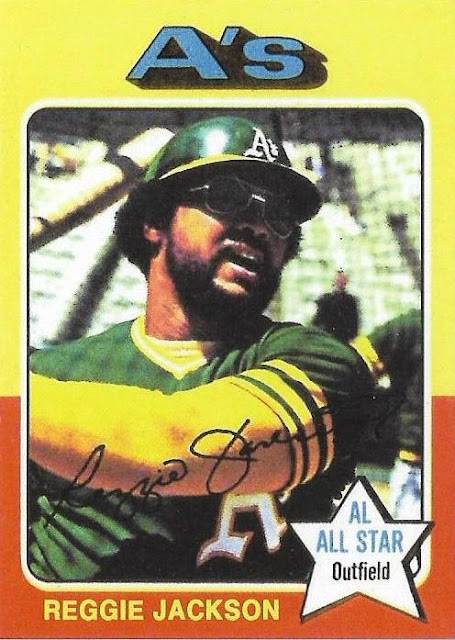 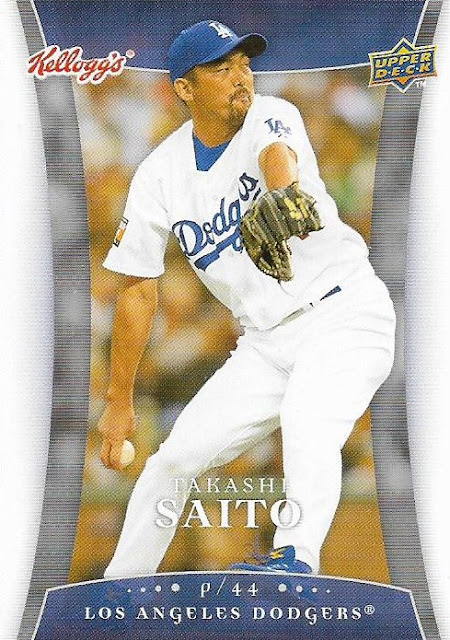 6. 2008 Upper Deck Kellogg's MLB Japan Takashi Saito
This became the latest Japanese card in my collection, a weird combination of an American company on the front and Japanese writing on the back. Pretty cool. 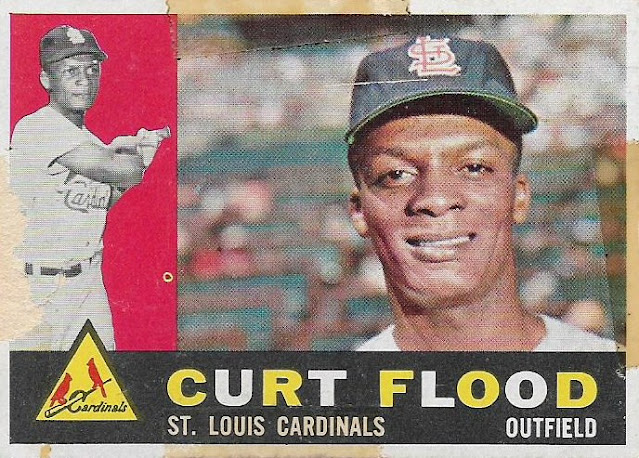 7. 1960 Topps Curt Flood
I love receiving Curt Flood cards. I don't have a lot of them (and some wacko has assured I never receive the 1964 Flood card), so each one is an event and an opportunity to celebrate the man who received so much undeserved harassment. 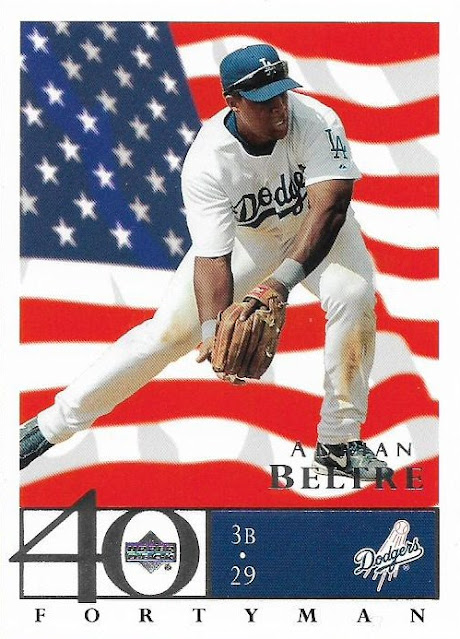 8. 2003 Upper Deck 40-Man Red, White & Blue Parallel Adrian Beltre
We're coming up on Independence Day again and on that day last year I showed off one of the great American Flag-themed sets (actually parallels) ever made.

Those are the next eight up for a vote. I don't expect a lot of votes this time around but I do appreciate the few of you who do vote ... and read, as my numbers that once averaged in the high 200s are plummeting into the mid-100s.

Cast your vote in the comments or copy-and-paste the following link to vote in the poll:
https://vote.easypolls.net/62bdeb698d447100624faa8c
If you make your choice known in the comments, please also add whether you voted in the poll or not.
Thanks for voting, reading, blogging and all that stuff we all used to do.

The Diamond King said…
I voted in the poll, love the Pilots card. Some stiff competition here though! The Carew and Jackson are faves,
June 30, 2022 at 8:06 PM

runfore!kelloggs baseball cards said…
I never see Kellogg's cards from Japan, so I've got to go with that one. I didn't vote online.
June 30, 2022 at 8:52 PM

Chris said…
This is a good group but that Pilots card jumped out at me right away, and none of the subsequent cards could change my mind.
June 30, 2022 at 9:41 PM

bryan was here said…
Voted for Rod Carew. Was always fascinated that Topps and Fleer both used that pic that year.
June 30, 2022 at 10:12 PM

The Fleer Carew always looked better than the Topps Carew.

John Sharp said…
Way late to the party, as I usually am.
Votedcin poll for 1960 Curt Flood.

bbcardz said…
I voted for the '75 Jimmy Wynn card in the last poll--so disappointed his card didn't take the top spot.

I'm actively trying to complete the '70 Topps set so the Pilots team card gets my vote (already voted at the poll). I have all of the '70 Pilots cards (except for one awaiting shipment from COMC) but still need 28 cards to complete the entire set.
June 30, 2022 at 10:17 PM

Old Cards said…
Was all ready to vote for the 67 Perry and then scrolled down to the 60 Flood.
However, since I much prefer vertical cards over horizontal and 67 Topps is one of the great sets, I voted for the 67 Perry. Somehow, I accumulated Flood's cards from 1958 though 1968. He was a good player, but not a player whose cards I covet. Guess I should go for the few remaining.
June 30, 2022 at 10:22 PM

Fuji said…
Toughest vote so far. There were six cards I could make a case for with it coming down to the Pilots team card, the 75T Reggie revised, and the 1960 Flood. Ultimately... I voted (online) for the Pilots team card because it's a unique piece of history.
July 1, 2022 at 7:37 AM

Bo said…
While we are not doubt a smaller community, I think we're still a pretty tight community. It feels like I'm trading just as much, just with the same few folks over and over again. That seems like a tight community to me.

Nick said…
This is probably the toughest choice yet for me. Hard to vote against Reggie & Curt Flood, but how could I not go with a Pilots team card?! (Voted in the poll.)
July 1, 2022 at 4:38 PM