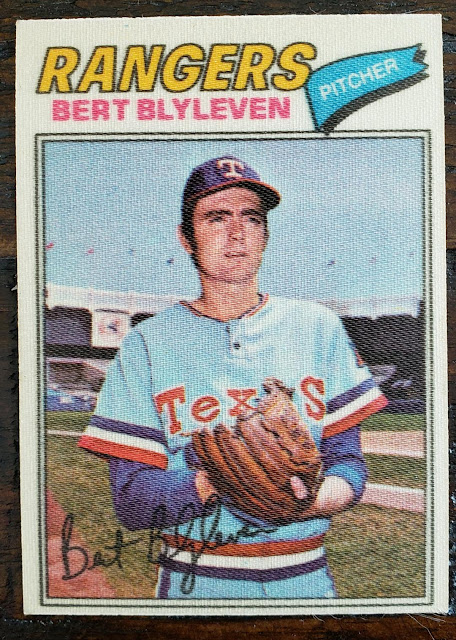 I know I've written a lot about oddballs throughout this blog and I've really been spouting off about them in the last six months or so. I probably should change this blog to "Oddball Owl Cards" to make it more appropriate.
I've written about them so much that I wanted to do a post on why I like them so much. This isn't a "how-to," in fact, I'd prefer that you didn't copy me and collect these things. It's one of the few kinds of cards where I don't have to beat back the competition.
So here are a few reasons why I collect oddballs. (Remember: don't start collecting them!) I shall use a bunch of oddball cards that I just received from Nick of Dime Boxes as visual aids to support my argument.
1. Oddballs are the last chance to collect the players that I truly adore. 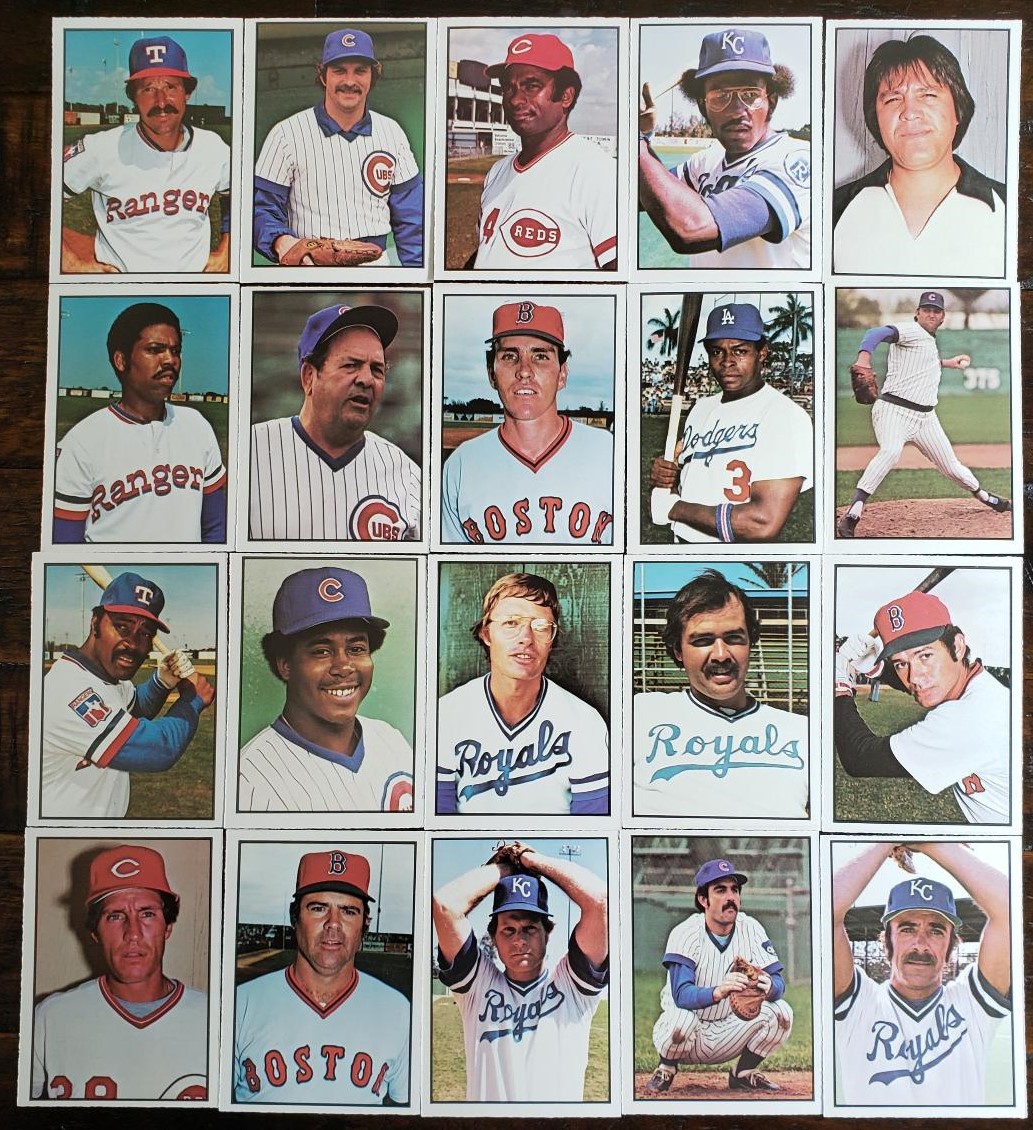 These are all cards from 1978 SSPC. I have so few of these. I need so many more.

Oddballs give me a chance to say hello to the players from my childhood one last time.
I have collected all the Topps cards from this time period. Oddballs are all that remain. But all I need to do is look at those oddball cards for the first time and I'll know instantly why they're meant for me and I must have them.
I can look at these cards, without any words on them, and know who the players are instantly. That's Steve Mingori in the lower right corner. Next to him is Larry Cox. Way in the upper right corner is Francisco Barrios. I know a bunch of the others without turning over the card, too. I couldn't say the same thing if a set that looked like this contained modern ballplayers.
2. Oddballs often give you a new perspective
Using the above cards as an example again, there is a card with an action photo of Woodie Fryman pitching for the Cubs.
The only card that I have known of Fryman with the Cubs is his 1978 Topps card in which he's airbrushed into a Cubs hat. The shot of Fryman actually in a Cubs uniform -- doing things in a Cubs uniform -- is mind-blowing. It's a new look on something that I've known for a long time -- that Fryman pitched for the Cubs for a brief period. 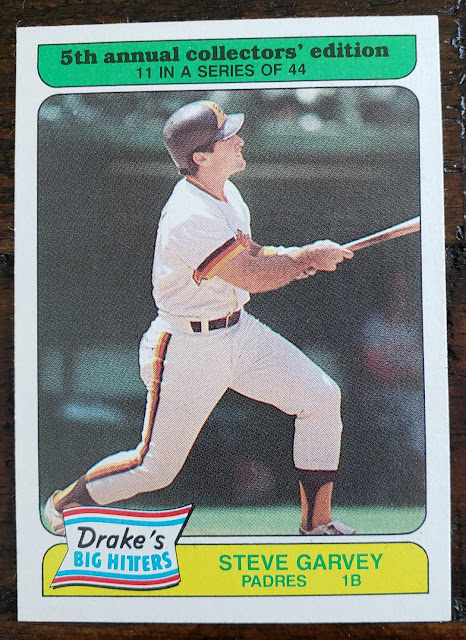 3. Oddballs are usually affordable
Like I just mentioned at the beginning, oddballs are one of the few kinds of cards that hasn't shot up in price the last couple of years (Kellogg's cards are an unfortunate exception).
Vintage cards will cost you an arm and a leg and, these days, an ear and a nose, too. Modern cards are overpriced, almost across the board. And if they're shiny or scribbled on, well, you're going to pay stupid prices for those.
Oddballs don't have that kind of conceit. They are cool without knowing that they're cool. Nobody brags about them like they do autographed cards or rookie cards or cards from 1909. But I know how much they mean. Quiet cool is the best kind of cool, any woman looking for a mate will tell you that. 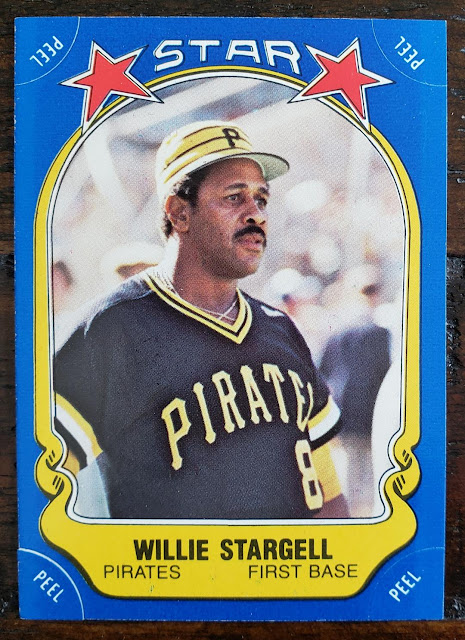 4. Oddballs are not obsessed with standards
We card collectors squeeze cards into little boxes with our priorities: cards must be 2 1/2-by-3 1/2, no smaller, no larger. They must be cards, not stickers. Cards must be well-trimmed, preferably through high-speed mechanical means. No do-it-yourself, raggedy edges.
I find oddballs appealing because they don't care about our little rules. They're smaller, like Kellogg's cards or early '80s stickers. They're flat-out stickers, like the '81 Fleer Willie Stargell up there, or the 1977 cloth Bert Blyleven way at the top. They're larger, like 5x7 photos from the early '80s or those freaky 3-D plastic things from Topps in the mid-'80s. 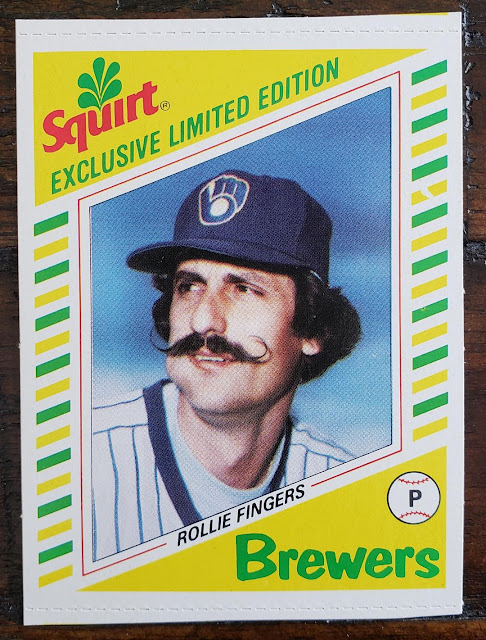 They're wider, like this 1982 Squirt card or a host of TCMA issues from the 1970s. Just try to shove those into a binder page. Oddballs don't care about your page sizes. Sure, that's annoying, but God love oddballs for being so damn independent. 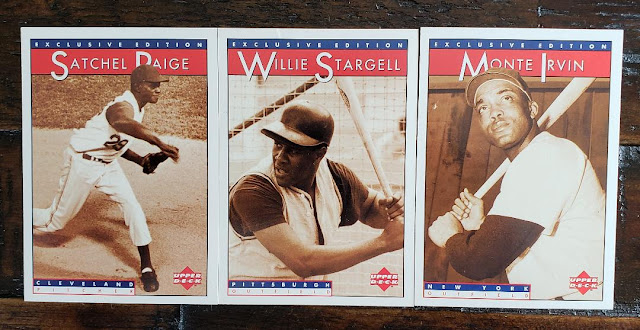 5. Oddballs don't piece-meal their legends
Topps has all kinds of rules about which legendary players it shows in its sets. It's all about rights and contracts. Oddballs, especially ones from before we had all these ridiculous exclusives, showed whatever old-time players they wanted.
Oddballs were what introduced me to the concept of legends on cards, with the TCMA and Renata Galasso sets (I'm sure it was the same for older collectors with early '60s Fleer).
And oddballs will go right ahead and show those legends even if they don't have the rights to everything. They'll just remove the logo, like with these 1995 Upper Deck Sonic cards. But the oddball design is usually so pleasing, it's not an issue. (Panini has a difficult time with this, meanwhile). 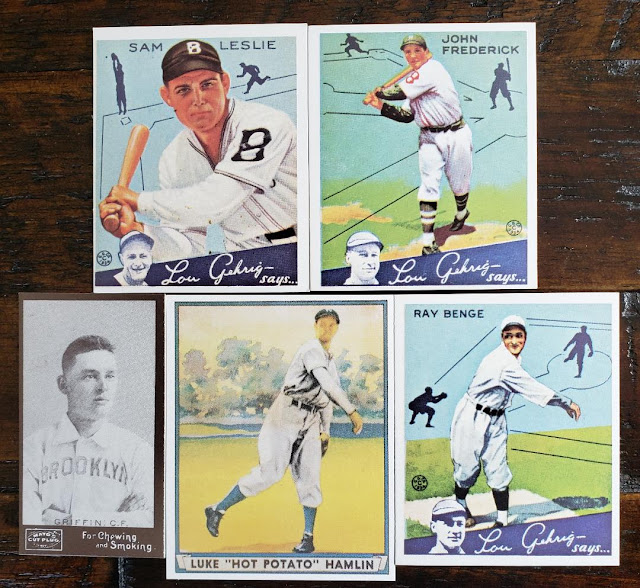 6. Oddballs are just plain fun
I don't make a habit of collecting reprint cards -- in fact, Nick is probably my primary source for cards like this. But they are fun, they give you a chance to imagine what it's like to hold one of those old Goudey cards, all for a small price.
You don't need "fun" to spell "oddball" but you do need to have fun to collect them. You can cut them off a box. You can find them under Twinkies. You can grab one with a six-pack. You can stick them all over the house, if you so choose. FUN! They will not conform to Standard Size, Photo On Front, Stats On Back. Or maybe they will. The oddball will decide that, not you.
And because of that, because oddballs won't "be cooperative," a lot of collectors will ignore them. And  to that I say: YES, HAND ME MY BOUNTY!!
Nick sent me a few other non-oddball cards. 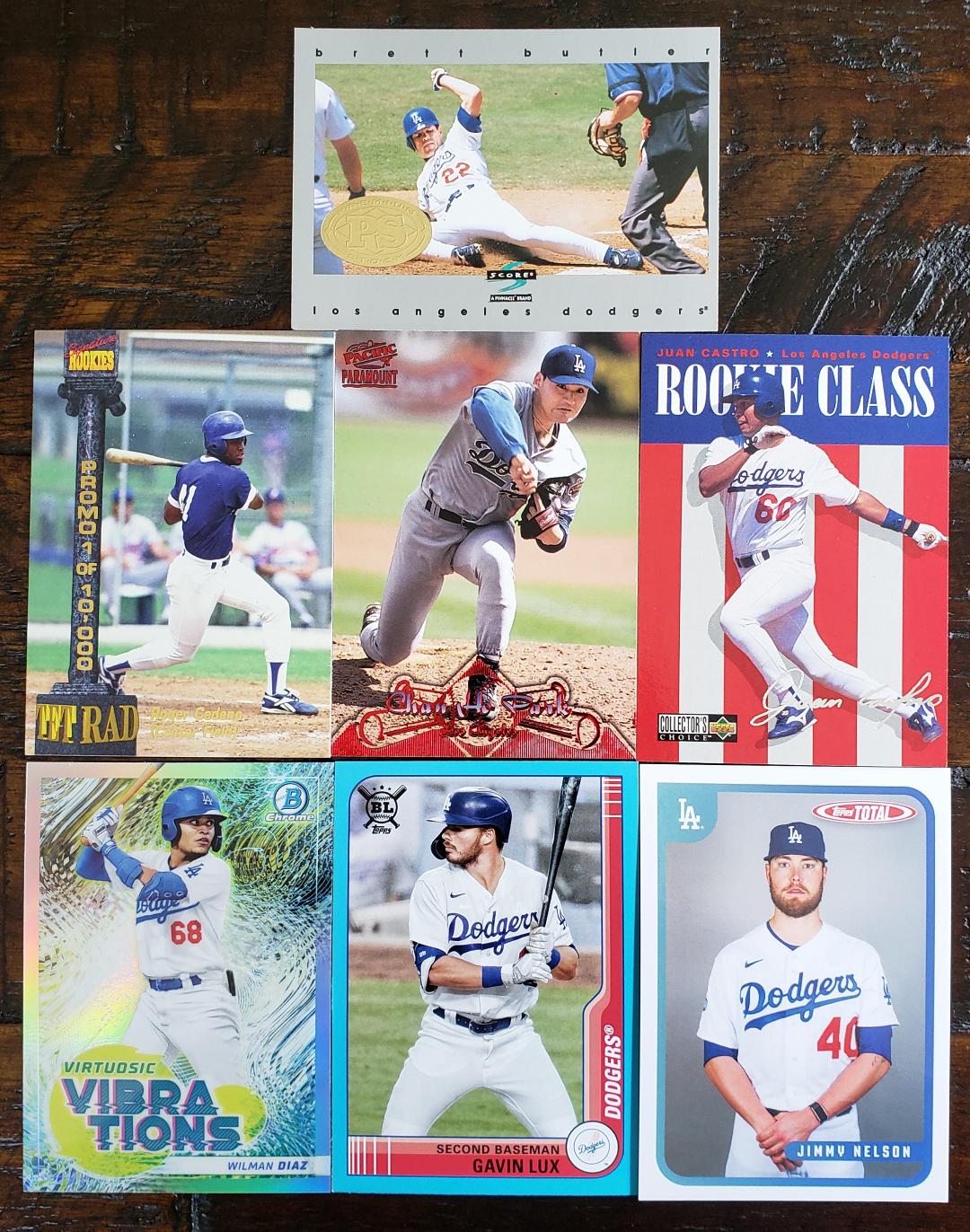 Some Dodgers, for example. He was a bit concerned with his Dodgers stash, but every one of these is a need, so that's pretty good. 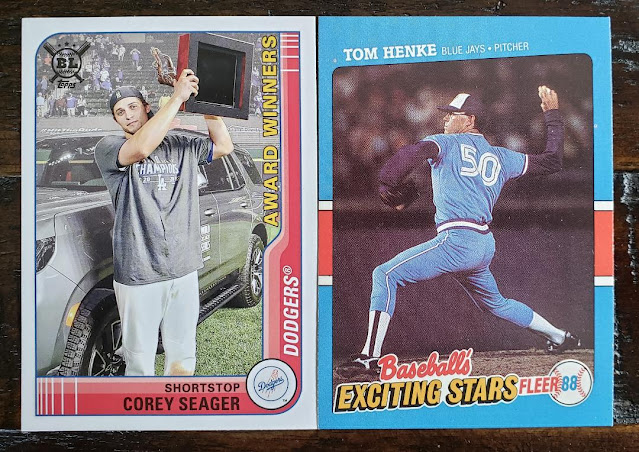 A couple of night cards -- and both advance to the Night Card Binder, which is not easy to do these days. 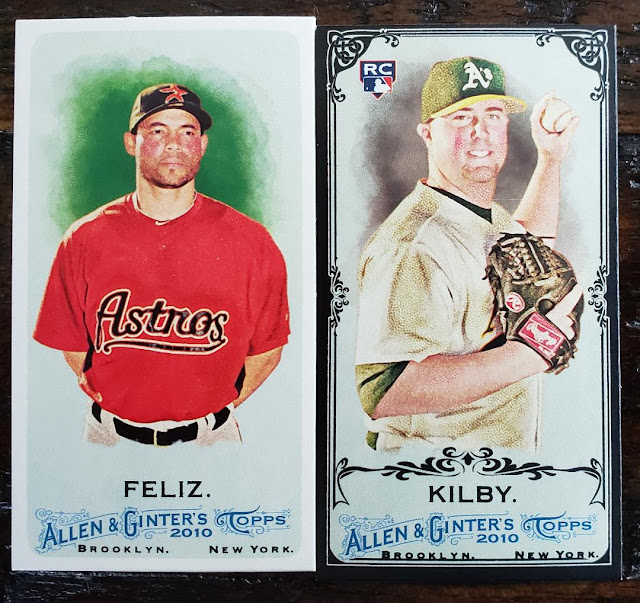 Speaking of "type" binders, Nick sent several A&G minis, as he often does. These two 2010 minis were the only ones that make it into the binder and they're probably the least well-known names of the bunch. That A&G frankenset binder doesn't like conforming to conventions either. 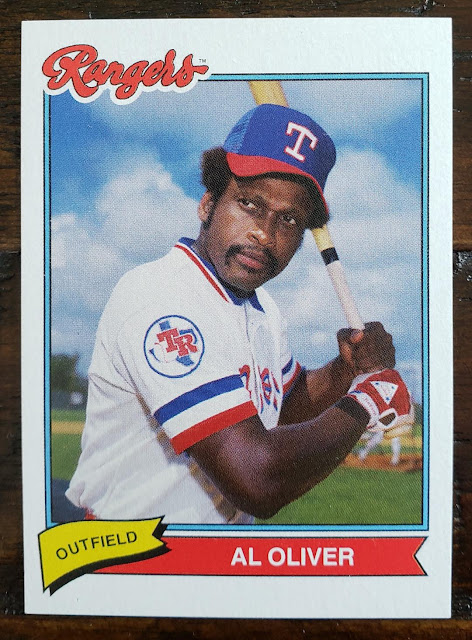 Cards like this Super '70s Al Oliver is about the only way Topps is going to provide me with a current card of my favorite '70s players, one that I haven't seen a million times before. I suppose you could consider this a modern-day oddball, but Topps botches it by making it an on-line exclusive and also making it too expensive.
Oddballs should be readily available in every way. It's in the Oddball Card Constitution!
So those are some reasons why I like oddball cards and why I have gone all-in on them, this year more than ever.
I hope I will be able to continue to do this, and pursue my beloved Kellogg's cards again, too. Just keep chasing those Wander Franco cards. In fact, more of you do that please.

Laurens said…
I like the more mainstream oddballs usually with full player / MLB licensing and generally produced by a major card manufacturer.

I can’t say I like just any oddball card that looks like they were printed in someone’s garage - though it may be a case where posts like these encourage me to consider these deeper cut issues when rummaging through a box at a card show.

Jimetal7212 said…
Because oddballs are the best. They have their own special place in my collection. All those box sets from the 80s/90s are neatly staged in a 5K box. Drake, Coke, Stickers, Conlon and so on have their place. Still working on TCMA issues; they definitely stayed active in their day.
May 23, 2022 at 8:50 PM

bryan was here said…
From one oddball collector to another, I appreciate this post. I'm starting to expand my parameters (which were rather expansive to begin with) to include police sets that are larger than the standard 2.5x3.5.

Team sets are also a fun oddball to collect, even the more recent Topps blister pack sets have different cards than the base cards.
May 23, 2022 at 8:51 PM

Nick said…
Probably no surprise to you, but I agree 100 percent on everything in this post. I especially enjoy '70s oddballs because there's (relatively) way fewer cards of those guys from their playing days - seeing a new oddball from their heyday is like discovering some kind of lost footage from the cutting room floor.

Bought a decent-sized lot of '78 SSPC on eBay last month because it had a few cards I needed - glad I was able to find a good home for the rest of 'em! Might have a card show coming up in a couple weeks, so hopefully I'll get to replenish the Dodger piles a bit there.
May 23, 2022 at 8:56 PM

runfore!kelloggs baseball cards said…
Count me in for the oddball cards. I used to be able to buy Kellogg's cards online without huge competition until a few years ago.
May 23, 2022 at 11:12 PM

Fuji said…
Oddballs are one of my favorite things to collect for all of the reasons you mentioned in this post. I think it also has to do with seeing so many oddball issues listed in magazine ads when I was younger. I was always so curious about them. So when I returned to the hobby and started seeing them in discounted boxes, I had no choice but to start picking them up.
May 24, 2022 at 12:43 AM

Bo said…
Of the many reasons I like oddballs, one of my favorites that you mentioned is the chance to get a playing-days card of someone from the era I collected. I have pretty much every mainstream card from that time (1987-1993) so it's fun to "fill in the blanks".
May 24, 2022 at 10:51 AM

Crocodile said…
Dang it Night Owl, STOP PUBLICIZING ODD BALLS! Now every collector on Earth will want them and prices will go up. :)
May 24, 2022 at 11:43 AM