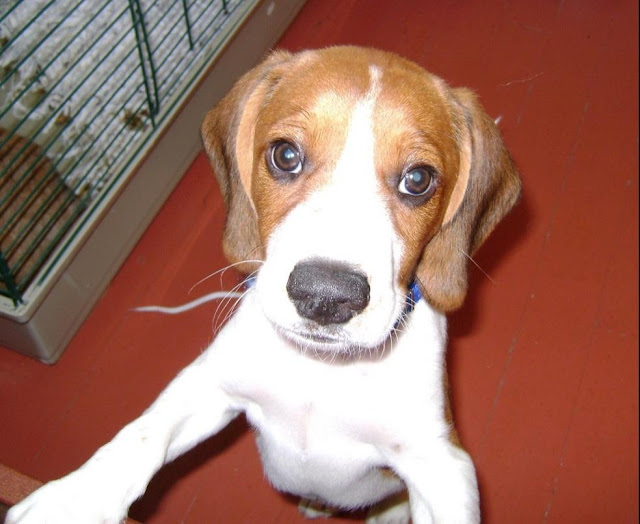 I wrote about my dog a fair amount in the early days of this blog. He was a terror then, leaving a path of destruction whenever we left the room.
Nothing escaped his jaws, it certainly didn't have to be edible, and since this is a baseball card blog, you read about the times he destroyed some baseball cards. 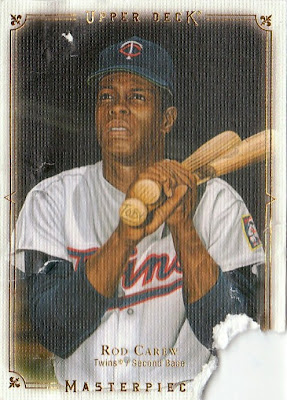 He even went through some Christmas presents under the tree one year and tore out some card packs with his teeth.
As the years went by, Dodger calmed down -- relatively speaking as he had beagle in his blood -- and was no longer a threat to cards. Just the other day last week, I happened to drop a couple of cards into his bed where he was sleeping without knowing I did it. I came back hours later to find them right where I dropped them, completely untouched.
Dodger could barely see by then and his hearing was just as bad. He'd pace relentlessly even though his legs were wobbly and the health problems that he had lived with for years grew worse and more dire.
On Sunday, Mother's Day, the day he was born 14 years ago, we knew he was fading fast. We stayed up with him all night. And Monday morning, as my wife was on the phone making an appointment for him to be put to sleep, he passed in his bed, where he would often sit or sleep as I wrote blog posts.
Dodger was a farm dog. We got him at the urging of my daughter who had just turned 10 at the time, one month before I started reading card blogs and four months before I started this blog. I would often measure how old he was by how long I had written the blog.
Dodger was my first dog pet. I think I've mentioned that I didn't grow up with animals, my mother was not an animal person. But I married someone who was. She had a dog, Holly, when I met her. Holly and I got along great. After we got married, we had two different cats, and then Dodger came along.
Now, there's no one. It's my first day with no one in the house in so long, I can't remember when. No one waiting at the door, no one staring at me for dinner time that's two hours away, no one to greet me with the snack ritual when I get home from work late at night, no one to bark at the porch intruders, no one to chase away squirrels (he didn't catch a single one), no one to walk, no one to freak out over thunderstorms. No one to be completely irrational.
As I'm writing this, I feel his presence in the next room, but I look over and nothing's there. It's weird.
It's got to be weirder for my wife, who has had pets all her life. Yet, she has insisted that this is the last pet. She said that long before Dodger passed, and part of me doesn't believe it, but this really could be it. I don't know how I feel. I sort of like it. But I sort of don't.
Anyway, I was going to show some card pictures of dogs, but I've done some of that before, and I'm not really feeling it. Here are a couple more photos of my dog instead: 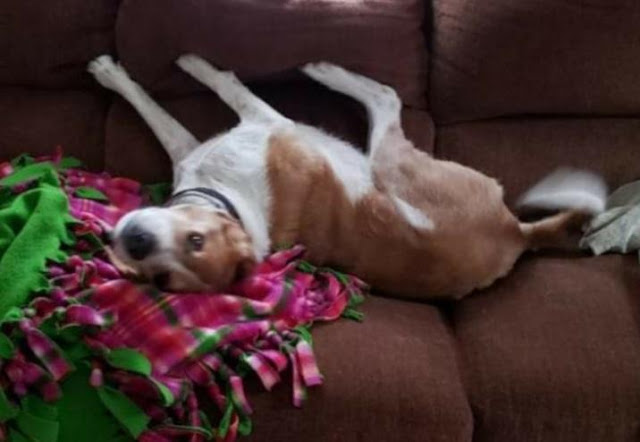 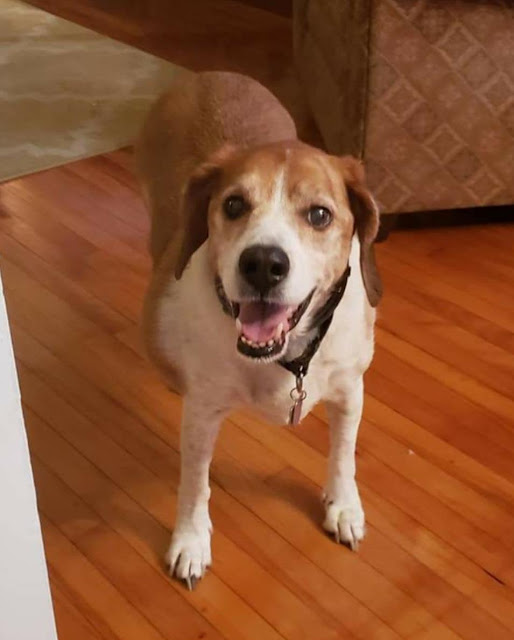 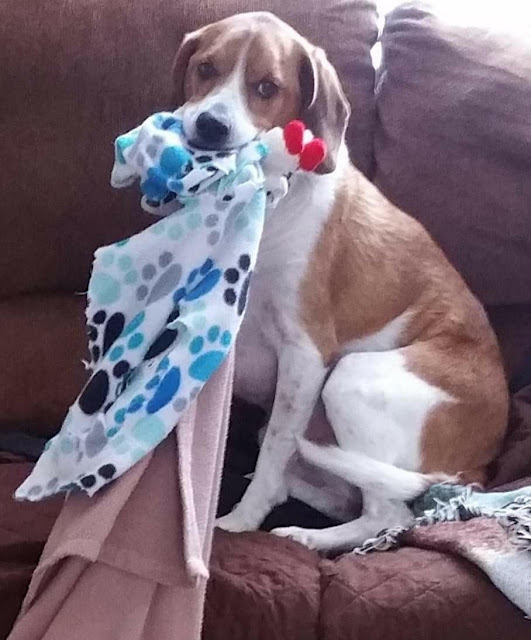 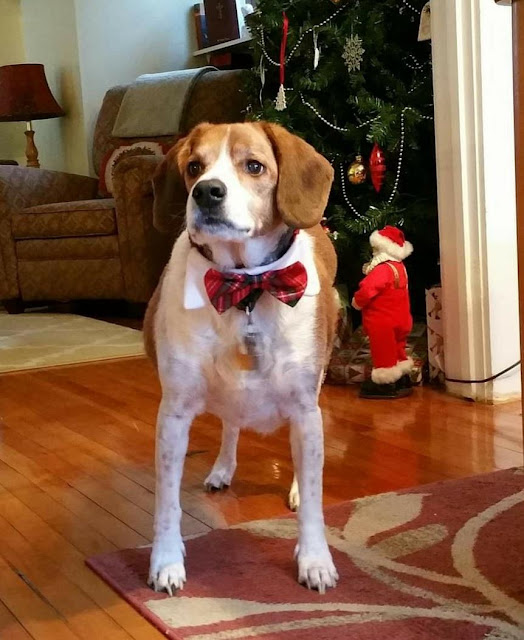 He was a good boy.
Going back to when he used to destroy cards, here are a couple of cards that I've owned since he put his teeth marks in them many years ago: 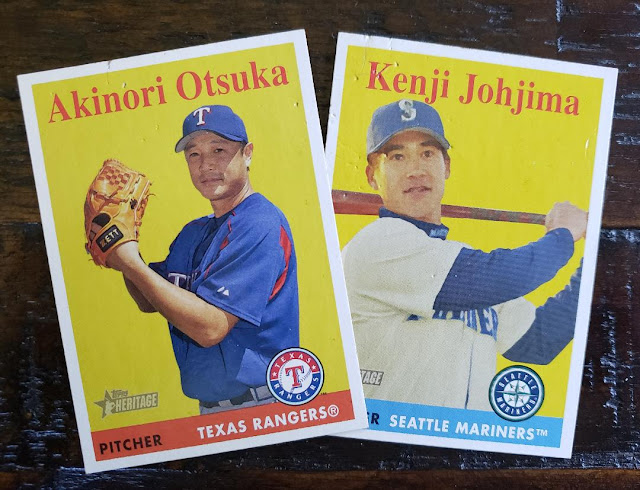 They don't look too bad, just a few love bites, but there have been many a time I've shuffled through my shoeboxes looking for cards to trade and saw these two and thought, "can't trade those."
The status of those cards changed yesterday. I don't want to trade them now and they'll be getting a place of honor. 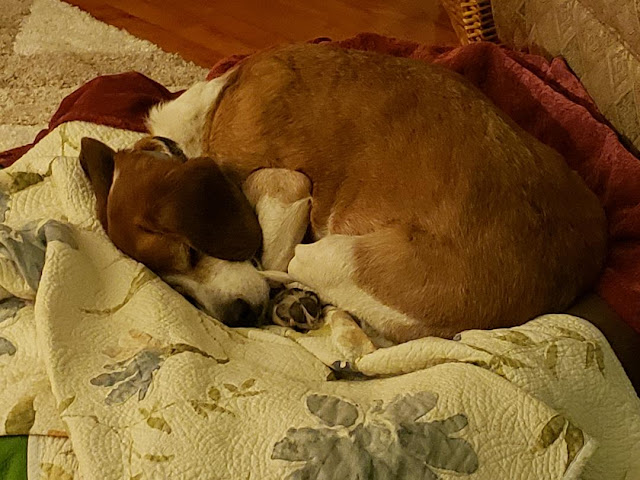 Miss him. We picked a good one.

Mike said…
I am so sorry for your loss. I am happy that Dodger was able to be your friend for as long as he was, though. You surely made each other's lives better because of it.
May 10, 2022 at 8:14 PM

Nick said…
RIP, Dodger. Pets are a treasure but seeing them go is so incredibly difficult. Sounds like he had a loving home, and you can't ask for much more than that.
May 10, 2022 at 9:02 PM

simpson said…
like all the others, I'm sorry to hear this and hope you and your wife are coping okay. our dog - also named dodger (must be a fan thing :) but a pitbull mix - turned 16 last month and is quite wobbly himself, but is still making it work. I know you'll treasure the memories, no surprise the love bit cards carry more weight now.
May 10, 2022 at 10:23 PM

Fuji said…
Very sorry for you and your wife's loss. I know everyone and every family treats pets a little differently, but I've always been one who gets attached to dogs just as much (maybe more than) as people. Dodger was a very cute dog and I'm glad you have some cards he left his mark on. Seeing those tiny pinhole sized teeth marks made me smile.
May 11, 2022 at 8:14 AM

Crocodile said…
Sorry to hear about your loss. Being a dog owner, its hard to hear about a loss such as this. They really are a part of your family and losses like this sting a bit but you always have those memories with your pet. Maybe we'll be reading about Dodger2 someday.
May 11, 2022 at 9:27 AM

Matt said…
I'm very sorry for your loss. My family lost our first pet (a rabbit) last month, so I know exactly the sadness you're feeling right now. Thanks for sharing pictures and memories of your beautiful dog.
May 11, 2022 at 10:37 AM

GCA said…
Aw man, that is a tough day. It's kinda nice he passed peacefully at home. I had friends who had a nice parting experience with their pets, but mine was a little rough. Didn't feel like I quite got to say goodbye, but she knew....
I tried to get another one a year and a half later, but it wasn't the right match. Haven't tried since and I don't think I will until I retire. Nobody is at home otherwise, and I've become lazy and unwilling to get up earlier for walks. I should still go on afternoon ones, but I haven't forced myself to do that either.
Your wife might say that's it, but it may get too quiet for either of you after a while...just sayin'
May 11, 2022 at 12:02 PM

Dawgbones said…
Sorry for your loss. Take heart knwing he'll have plenty of friends at the bridge. July 2019 we had 5 dogs in our household. In August we lost Fred to cancer, I'd written about her on my blog when she ate a few packs of cards too.
September 2020, we lost Willow, also to cancer. Then in November, we lost my in-laws dog, leaving us a household pack of 2. We picked up our first Australian Shpeherd in December as our oldest was now 15 going on 16 and didn't want Piper to be alone when Kaylee left us. That came in February, 2021 on President's day.
Shortly after we learned Piper has a mass on her liver! We then scrambled to find a playmate for Billie, the Aussie, picking up Loki, another Aussie, last August. Piper defied the odds and finally left us right before last Thanksgiving. We are now a house pack of two, and though the house is a lot quieter these days, I can't picture not having fur-kids around.
As I sit here, currently away from the states for the next 5 weeks in Poland for work, I'm getting my puppy fix where ever I can for now.
I know where you are at right now, and tearing up as I type. I have had and lost 7 dogs now and still find it the best bargains I've made. In return for a little food, water, and a place to lay their heads, they give us their all, unconditionally. Yes, they take a peice of us with them when they go, but they live on inside us.
Take care of your self my friend. This pain will fade, but the memories will last forever.

carlsonjok said…
I am so sorry. I have had many pets over the course of my life and such goodbyes are never easy. I think the partings actually get worse as we get older because our animal friend's purity of spirit stands in such contrast to what we've experienced in our decades navigating the messy human world.

I have found that that each loss leaves a hole in my heart that is hard to fill except by welcoming another in. I don't know if it works like that for everyone, but if it does for you, and you do get another dog, I hope you'll name him Tommy Lasagna.
May 11, 2022 at 7:57 PM

EddieK said…
I'm so sorry to hear about Dodger. He was a lucky doggy and now he's your guardian angel. My deepest sympathies to you and your family.
May 11, 2022 at 10:55 PM

Jafronius said…
Sorry for your loss. I was in the same boat; no pets growing up but married a dog lover. She gave me grief when Miner died because I was sobbing almost as much as her and the boys, but even though I'm not a "dog person" 15 years with the guy will of course affect you.
May 12, 2022 at 8:49 AM

Jon said…
Losing those 4-footed family members is never easy. I'm more of a cat person, and tend to get way too attached to them. After the last one, Beanie, left about 20 years ago, I vowed that I'd never adopt another. I've kept that promise so far, but do still miss having a little one around the house from time to time.
May 12, 2022 at 8:50 PM