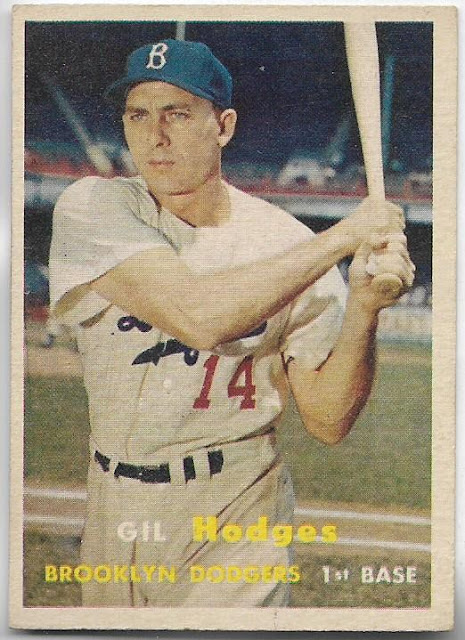 The Dodgers announced yesterday that it will retire Gil Hodges' uniform No. 14 and that the ceremony will take place June 4 when the Dodgers play the Mets.
It's been a long time since the Dodgers retired a uniform number. The organization, with one exception, does not retire a number until the person who wore it is elected to the Hall of Fame. I think this is the proper way to retire numbers, rather than the "just-because" reasons that several other baseball teams do.
The last time the Dodgers retired a uniform number was on Aug. 14, 1998 when they retired Don Sutton's No. 20. Twenty-four years have gone by since, but, heck, people have been waiting for Hodges to reach the Hall of Fame for a lot longer than that.
So I figured I would revive a blog series that I haven't done in years -- just to continue the whole "what you waiting for?" theme.
This is where I review all the players who have worn a certain number for the Dodgers. Today we're looking at No. 14.
I'll breeze through this quickly. The information on uniform numbers is more easily accessible than it was when I was writing these posts regularly. As a way of introducing it, I'll say that a lot of players who barely registered with the Dodgers have worn the No. 14 since Hodges last wore it in 1961.
Players like F.P. Santangelo, Pablo Ozuna, Larry Barnes (who?), Juan Castro and this guy: 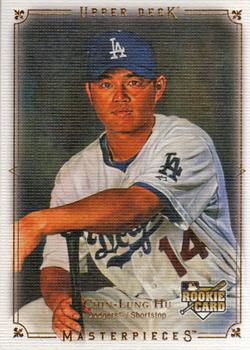 I sure do have a lot of 2008 cards of Chin-Lung Hu wearing No. 14.
Other Dodgers No. 14-wearers since Hodges' time include Dan Haren, Mark Ellis, Johnny Werhas, Tom Haller, Len Gabrielson, Mike Lieberthal, Von Joshua (his second tour), Ivan deJesus, Bill Skowron, Bill Mueller, Jamey Carroll, Chris Cannizzaro, Ken McMullen and Jeff Reboulet.
There are three, shall we say, notable players in L.A. Dodgers history who have worn the number, not as notably as Hodges but still, they wore it proudly. 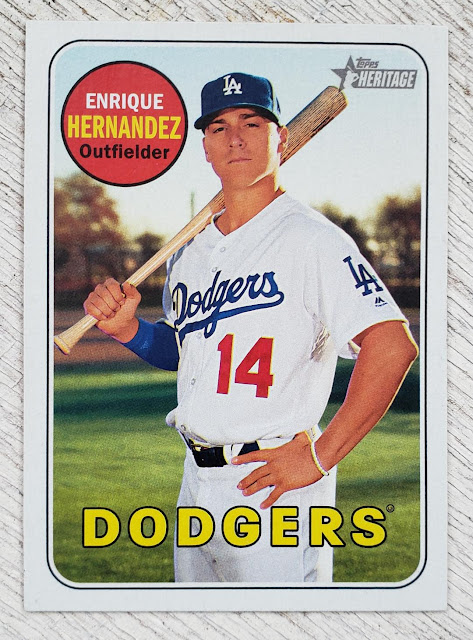 Enrique "Kiké" Hernandez is the most recent. He wore it from his arrival with the Dodgers in 2015 until his departure in 2020. He produced some really good cardboard wearing that number, although I'd say the number was often obscured because of all the arms and legs in action. Thank goodness for some old-school Heritage. 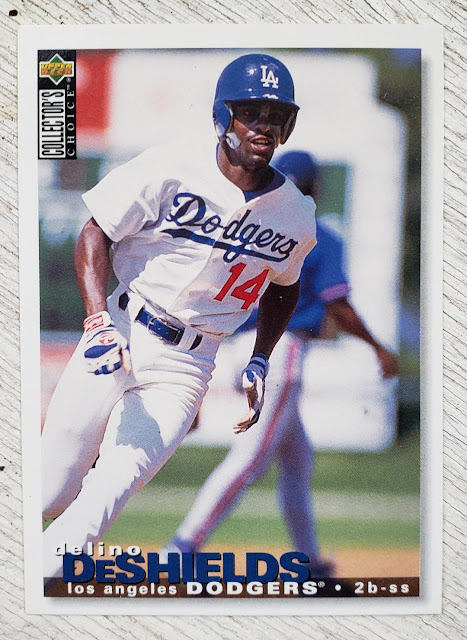 OK, I don't know how proud Dodgers fans were of No. 14 when Delino DeShields was wearing it between 1994-96, but he is definitely one of the more noticed players to wear it in Dodger blue ... er, red. 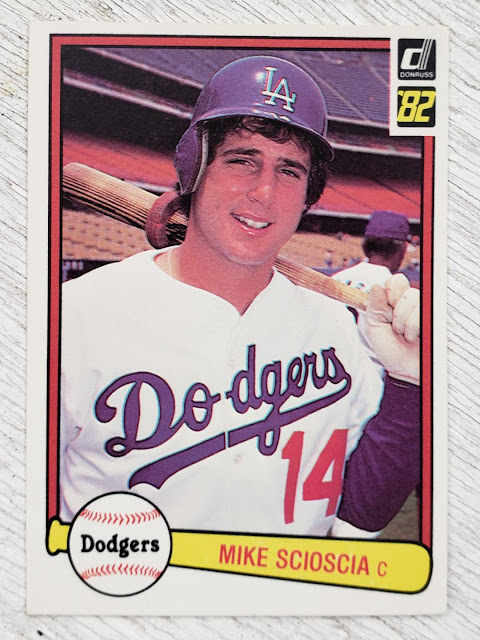 However, the most memorable No. 14 after Hodges for the Dodgers is Mike Scioscia. He wore the number from 1980-92, just shy of the length of time Hodges wore it. And he won a couple World Series wearing the number, just like Hodges did. 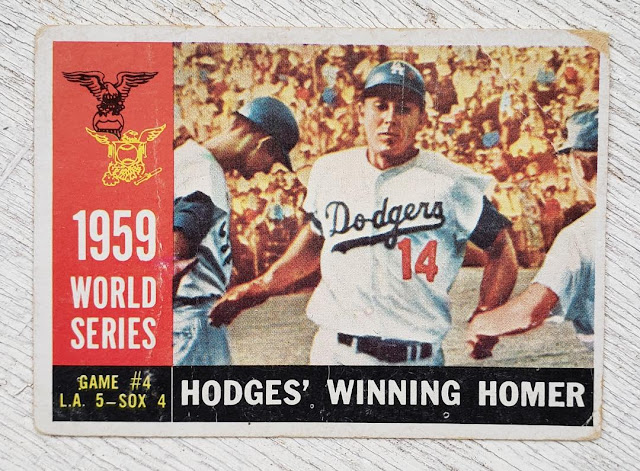 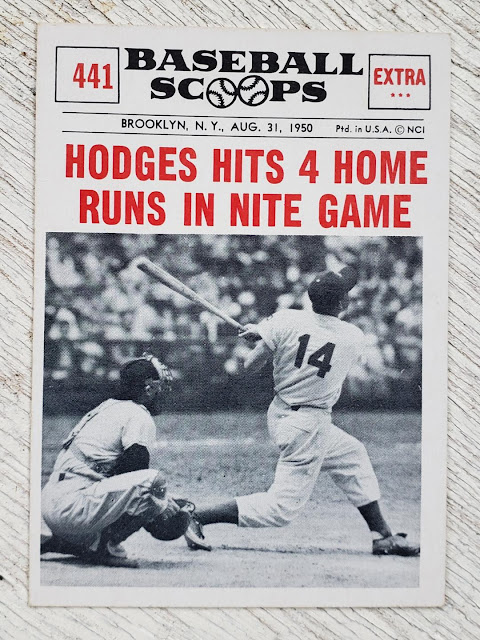 Nick Vossbrink said…
Glad the Dodgers are sticking to their standards here. I understand why the Giants broke from that for Bonds. Don't mind Clark being honored either (30 years later and I think it's still recognized as his number) but it feels like any moment it's going to become the Yankees nonsense now.
May 27, 2022 at 10:45 PM

Brett Alan said…
I once ALMOST screwed up in a trivia contest by answering "Dodgers" as the team which had retired Hodges' number, but I caught myself in time. Now they'd both be correct. Glad they're doing it against the Mets.
May 27, 2022 at 11:15 PM

Fuji said…
This is great news. I feel bad that I lived most of my life without giving Hodges the recognition he deserves. But thanks to a few articles, blog posts, and personal exploration I've discovered just how impressive his career was.

This post motivated me to see if there are any non-hall of famers with retired jersey in Oakland or San Diego. Every A's player who has had their jersey number retired is in the hall of fame. But Randy Jones and Steve Garvey's numbers are retired in San Diego.
May 28, 2022 at 12:35 PM

Bo said…
So basically the Dodgers punted the decision on whose number to the baseball writers, rather than making the decision for themselves. Too bad for guys like Garvey and Valenzuela who would clearly deserve retired numbers.

The Yankees have had 40 Hall of Famers and 23 retired numbers. Fewer retired numbers than World Championships. Paul O'Neill is the first obviously bad choice for a retired number. Not sure who else would be considered unworthy. Maybe Guidry? Martin, Munson, Maris, Howard, Posada, Pettitte, Bernie Williams - all clearly deserving based on what they did for the Yankees. If they'd played for other teams some of them would be HOFers already, but anti-Yankee bias hurts guys like Munson and Bernie.
May 28, 2022 at 10:25 PM

night owl said…
I'm sure those who had their number retired because they were inducted into the Hall of Fame feel that it adds weight and credence to their retired number, rather than it being retired at the whim of a baseball team as some sort of marketing ploy. Garvey and Valenzuela don't deserve retired numbers because they were not elected into the Hall. Padres whiffed on that one (as they often do). O'Neill doesn't deserve it either.
May 29, 2022 at 12:43 AM

John Collins said…
While in theory I agree with the notion that a number should not be retired until the player is elected to the HOF, maybe exceptions are warranted in a case like this one - to your point, Scioscia wore #14 for nearly as long as Hodges. He wasn't exactly an insignificant Dodger. The fact that the organization waited so long to honor Gil kind of has the effect of erasing the impact of the number after Hodges, which I don't think is exactly right either. You could do worse like the Cubs, who allowed a young Greg Maddux to wear Fergie Jenkins' #31, and then wound up having to retire it for both of them.
June 1, 2022 at 10:27 AM