A decade of overkill 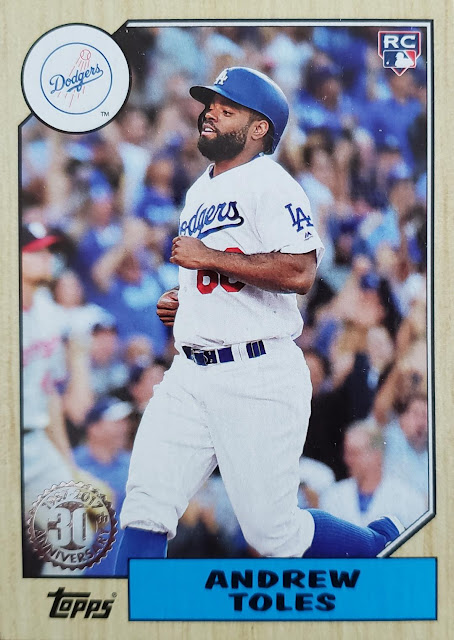 It's time again to wear my research hat.
Someone online was wondering how many players have appeared on the 1987 Topps design, given Topps' habit of trotting out the tired wood borders every chance it gets, even rejiggering the anniversary rules once to be able to use it again. 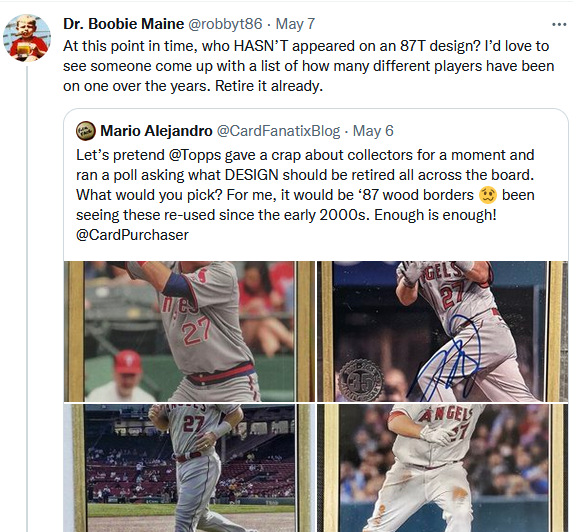 "I'd love to see someone come up with a list ..."
OK, that sounded like a challenge.
I shall accept that challenge.
I assume the reference was to players who have appeared on the '87 design after 1987 Topps came out. I don't see the point in counting up the players who appeared in the 1987 set. I also don't see the point of counting those player who showed up in 2001 Archives, for example, as those cards are repeats of the '87 cards, for the most part.
No, the real period for when Topps ramped up the '87 love, exploiting all those collectors who started their collecting journey that year, has been the past decade when Topps started putting players onto the '87 design for various insert sets under the guise of some sort of pseudo anniversary (35th anniversary? Come on, Topps, who is recognizing anybody's 35th anything?).
It's been a decade of overkill. I don't think anyone except the most blindly devoted '87 fan would argue. This pretty much sums it up: 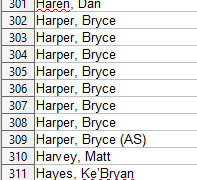 Bryce Harper has appeared on eight different 1987-themed Topps cards since 2012.
I didn't even count online-only cards for this exercise and there's definitely several '87-themed cards from online issues over the last 10 years. I also didn't count '87 parallels for obvious reasons. Or autograph issues.
Eight is crazy. Who wants eight different cards of the same player on the same design? (Yes, I know the hobby world is filled with weird people).
That's not even the most for an individual player.
So, yeah, anyway, I counted up all the players who have appeared on the 1987 design from 2012-22. There have been 900 different cards issued of the '87 design since 2012, not counting the online stuff, autograph issues and parallels (this is an update from the figure I said last night on Twitter, when you're dealing with that many names, you gotta double-check the work).
Here are the sets I considered:
2012 Topps '87 minis
2014 Topps Archives 1987 All-Stars
2014 Topps Archives Future Stars '87 design
2017 Topps '87 inserts
2017 Topps Update '87 inserts
2017 Topps Chrome '87 inserts
2017 Topps Silver Pack '87s
2017 Topps Silver Pack Series 2 '87s
2017 Topps New Era '87 inserts
2022 Topps '87 inserts
2022 Topps Silver Pack '87s
Out of those 900 cards, 375 players have appeared on the '87 design since 2012.
That includes such notables as Andrew Toles, Matt Strahm, Jake Thompson, Danny Duffy, Bruce Maxwell and Rob Zastryzny. I'm all for recognizing your average MLB players but this illustrates how much Topps has been churning out this design.
A better sign though is finding who has appeared the most. This is that guy: 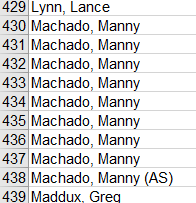 Manny Machado has shown up nine times on the '87 design! Yikes! 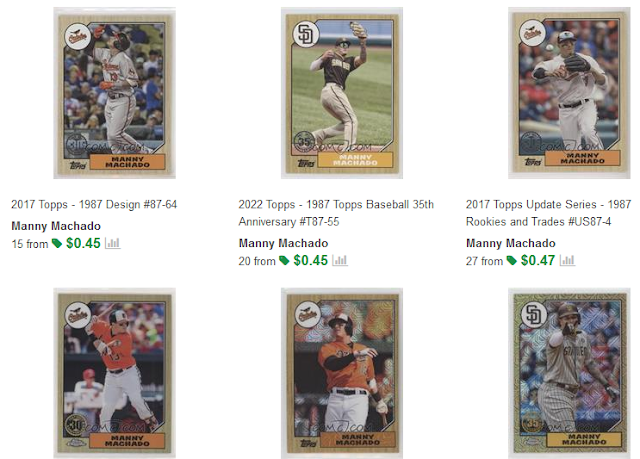 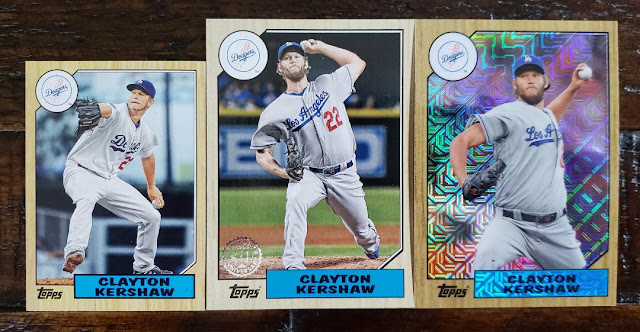 Kershaw appears on the '87 design six times, but I have just three of them. Two of the cards are inserts from this year. I just have no incentive to go after them because I am so tired of the design.
I'd like to think that the constant tributes to '87 will end after this year. But I know that the 40th anniversary of the set is in five more years. And, oh boy, in 2036 we will have a Heritage set that pays tribute to the 1987 design. And everyone will pretend (if there are any collectors left) that it's never been done before.
Going through the list of players, it's interesting how some players have very few '87 cards in comparison. Shohei Ohtani, for example, has just two (both this year). But there's a Project 70 Ohtani with the '87 design and also something from 2019 Transcedent with that design, too. If you want your guy on the '87 design, Topps is there for you!
(Meanwhile, those who started collecting in 1978 have been ignored like they have the plague).
I'd post the whole list of players here, but there is a Series 2 coming out soon and I'm sure there will be more '87 inserts in that thing. Also, Chrome will show up with '87s as well. Oh, yes, and 1987 is one of the designs in Archives this year. We've all been waiting for that. (Fortunately one of the other designs being used is the long-neglected '78).
So I'll probably update this list once those things happen, recalibrate, and present an updated post with the full list.
I grew up with the 1975 Topps design. I love it so much. I am also extremely grateful that Topps hasn't run the '75 design into the ground like it has '87. Thank goodness there was no 35th anniversary cavalcade for '75 in 2010. The design has shown up a bit, but not enough for me to worry about overkill. I would never want it to be treated like the '87 design has been.
Not that Topps is listening to me, or anyone, other than those collectors born somewhere between 1977-82.

bryan was here said…
I feel the exact same way. I can go down to my local card shop and pick up packs of genuine '87 Topps for $1 each. I'm still convinced there's warehouses full of unopened cases of '87 Topps. Those should be dumped in the ocean, or buried out in a desert in New Mexico. I can tolerate the non-wood border variations, but the design overall is meh. Topps really needs to use the '88 design soon. It's right up there with the '78 as criminally under-used.
May 17, 2022 at 10:21 PM

Mark Zentkovich said…
I don't chase inserts for my team, so this does not affect me much. But I see how it can feel overused as discussed here. I would be ok if they used it every 5 years or so. Might be cool to see it used in football or basketball when those licenses are used by fanatics.

Brett Alan said…
My quick and dirty count shows 725 different people in the original 1987 set, basically taking the 792 cards and eliminated checklists, Turn Back The Clock cards, and anything such as team leaders and All Stars which duplicate players from other cards. I left in the manager cards except for Pete Rose who has both a manager card and a regular card.

So that would be, oddly, exactly 1100 people, except of course some of the 725 will also be among the 375--just on the list of players who have appeared 6 times there's Ripken, Mattingly, Rickey, Nolan, and Ozzie. I'm guessing it's something more like 1050, but it should be easy enough to go through the 325 and see who's also in the original 1987 set.

felldownawell said…
What about the use in the 1992-93 basketball Archives set?

Doc Samson said…
Mr. Owl never fails to disappoint. Another excellent post. I distinctly remember when 1987 Topps was released. They were packs everywhere! I actually believe this was the true inception of The Junk Wax Era, because 1987 Donruss and 1987 Fleer weren’t far behind in being so grossly overproduced. Look at how cheaply you get those factory sets even today despite the stellar rookie class.
May 18, 2022 at 10:24 AM

Jeremya1um said…
Topps needs to focus on doing set designs that have had little love. Instead of focusing on an overdone set like 1987, focus on a neglected design like 1952.
I actually have a feeling that ‘52 would come in as a close second to ‘87 in sets that the company has forced us to see time and time again.
Thanks to you NO, for doing the work to see who has appeared in the ‘87 design the most. I had a feeling it was going to be Trout.
May 18, 2022 at 10:45 AM

Matt said…
I can't argue that it's overused, and wouldn't be disappointed if it was flat out retired. Despite that, no other design connects to me like that set does. I don't go hunting for these newer cards, but they always make me smile when I have one in my hands. Nostalgia is a powerful thing I guess.
May 18, 2022 at 11:19 AM

Fuji said…
Love these types of card trivia posts. Never would have guessed Machado had the most. Trout would have been my prediction. As for the 1987 design, I really like it. Plus I opened up a bunch of it when it came out. But that doesn't mean I support Topps over reusing the design as much as they have.
May 18, 2022 at 11:59 PM

carlsonjok said…
Even a single card in that design is too many. I absolutely loath wood grain sets. I'll never build 1955 Bowman and I am pretty sure that 1962 Topps will be one of the four vintage Topps sets I never build (the others being 1952 through 1954). Just reading this post makes me strangely angry, though not at you personally.
May 20, 2022 at 1:30 PM

runfore!kelloggs baseball cards said…
Nice research. Great mention of Rob Zastryzny. I never played much Scrabble as a kid, his last name must yield one of the highest word scores of any MLB player.
May 22, 2022 at 1:24 PM

Jafronius said…
Thanks for the research, looking forward to the follow up post. 1987 got me into collecting but I can't argue against the fact that it's overused.
May 23, 2022 at 8:40 AM