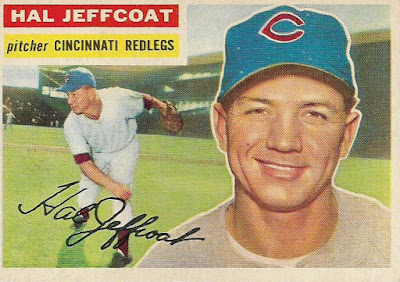 I've had a little bit more luck with finding vintage cards for my collection since moaning and groaning earlier.
It's nothing to write home about (but I will write about it), and it's mostly a product of actively pursuing it rather than my nasty habit of hoping the vintage comes to me, But it's an improvement.
One of the reasons I desire vintage cards so much, other than that they are the way God intended cards to be, is that I have so few of them in my collection relatively speaking. Every time I realize I have more Donruss cards than I do cards made before 1971 I want to punt half my collection into the street and start over.
I have so few of them that if there's a vintage card in my collection, I've probably written about it on this blog. Yup, every one. I get so excited when I get one I have to announce it to the world.
So the challenge here is to find five vintage cards in my collection that I've never written about ... I think. I probably have. Heck, I've got more than 5,000 posts, I'm not looking through every one to figure it out.
But I don't remember mentioning these more than in passing: 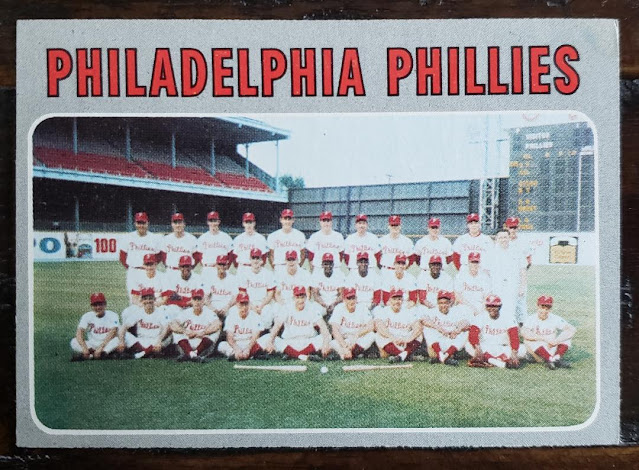 Vintage team cards offer a window into stadiums of yore and this is one of the best, showing off old Connie Mack Stadium in Philly.
I don't have much knowledge of stadiums that disappeared before I started being a baseball fan. With the exception of Ebbets Field, I find myself ignoring those gone-by parks (for probably the same reason why I ignore black-and-white movies, and tobacco cards, whatever that reason is). But I do find myself wondering about stadiums that reached the '70s and then disappeared. What were those old parks on the decline like? I think that's what I like: Parks On The Decline.
This card tells part of that story about Connie Mack Stadium, which lasted until the last day of the 1970 season. Then the park that I first knew as the Phillies' home, Veterans Stadium, took over. 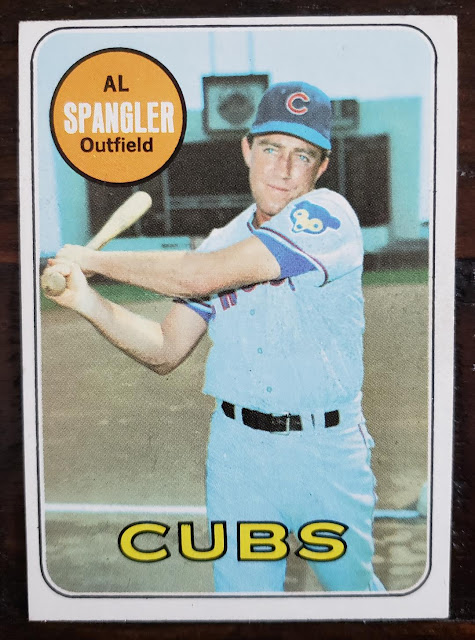 More stuff about the park in the background.
Al Spangler plays for the Cubs, it's there on his hat and uniform and written below on this very 1969 card. But the Mets logo in the background is unmistakable. Two teams represented on one player's card. What's more, it's two rival teams, who would duke it out down to September of 1969. And the Mets would win! Ouch.
Spangler probably couldn't even bear to look at his own card for a little while. 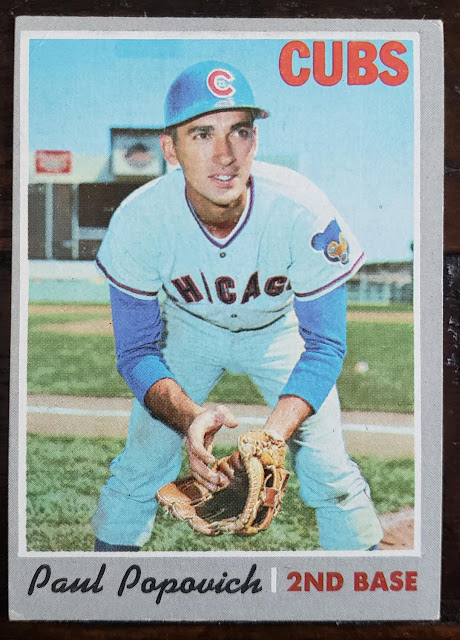 A year later, after the results were all out there, Topps is still twisting the knife. 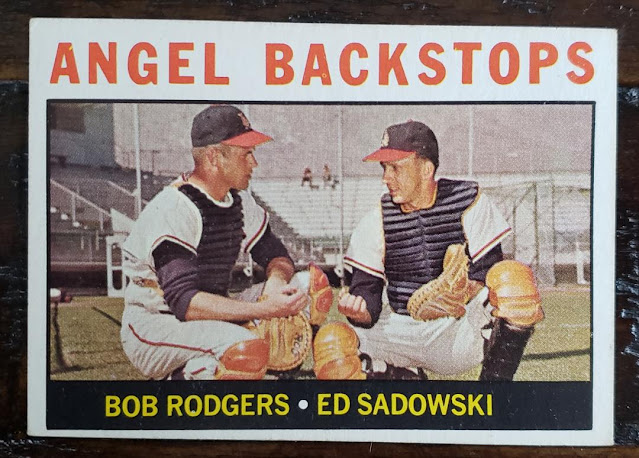 I've mentioned before that the combo cards from the '60s are perfection. I don't know why but they seem to capture what a combo card should be better than '80s Fleer did, better than Topps' attempts to replicate these cards 40 years later, heck I even like them better than the '50s examples.
One of my favorite parts of this card are the two folks in the stands way in the back. I picture one being a Rodgers fan and one being a Sadowski fan. They're debating who should be the starter right now.
Rodgers became well-known as a manager (I came across him in the Expos locker room years ago, fortunately he was clothed). Sadowski's two brothers, Ted and Bob, played in the majors at the same time Ed did. So if you were collecting in the '60s, you could collect the Alou brothers or be really hip and collect the Sadowski brothers. 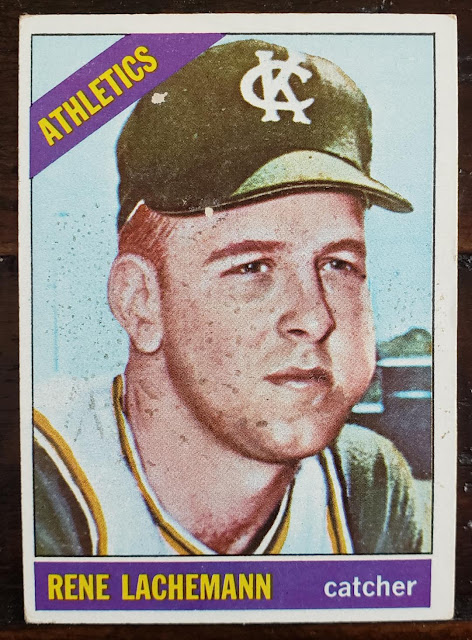 More catching fun and brothers in MLB fun.
It was Rene Lachemann's birthday yesterday. Everyone ignored it because Star Wars is still a thing. But I was pulling out this wax-speckled card.
I first came to know Lachemann when he was third Mariners' first manager in the early 1980s. I had never heard of him before, didn't know he used to catch in the majors, and I thought "what an odd name. Is that Swiss? The Swiss play baseball?"
Well, yeah, if they emigrate to California they do. Rene and Marcel Lachemann both played and managed in the majors. Rene was the first Marlins manager in history, too (I totally forgot that). Also, do yourself a favor and look up "Rene Lachemann and Jell-o." 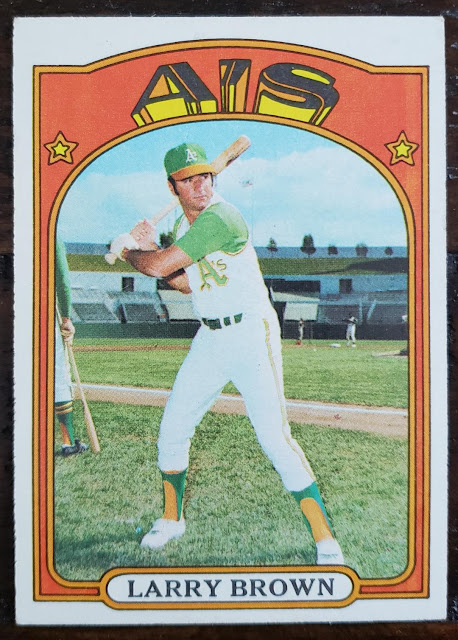 Final card that I've supposedly never written about.
I'm coming out right now and stating that this has to be Fuji's favorite card. Not only is it an Oakland A's player but it represents the kind of card that Fuji calls "a well-cropped card," meaning the player's entire body fits in the photo frame (except for some left toes).
This card is so special that it is the only card in the 1972 Topps set that shows the player entirely without that player either bending at the waist or being on an in-action card. I know because I looked at all the cards.
Whoever photographed the A's for this set seemed to be fairly adept at this. There are a couple of other A's cards that almost capture what the Brown card achieved. 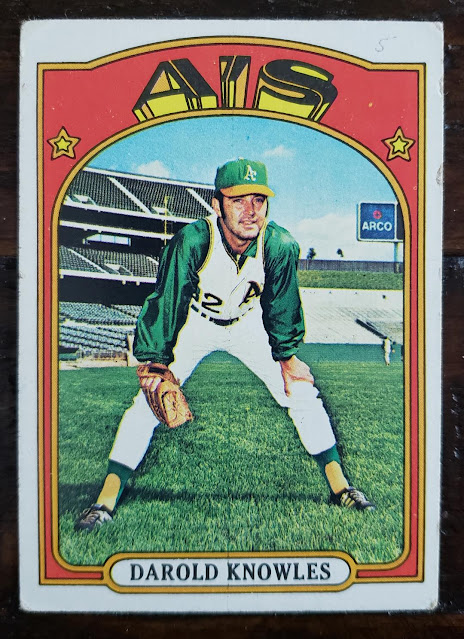 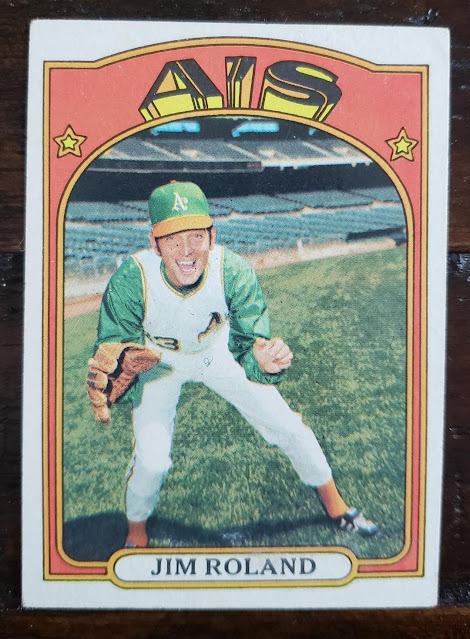 Ah, yes, Legend Of Cardboard himself, Jim Roland. But both Roland and Knowles are bending at the waist.
The Joe Rudi and Angel Mangual cards in this set are also similarly shot but most of the legs are cut off.
That's all I have to say about Larry Brown except to mention something that I've probably already mentioned. Larry Brown represents that time when I was returning to collecting around 2004, 2005 and hunting for cards to finally complete my '74 and '75 Topps sets.
The pawn shop that I'd go to contained rows and rows of vintage cards, pretty much all from the '60s and '70s. I didn't know vintage from the '60s very well at the time, so I kept turning up players I had never heard of and often several different cards of that same player that I never heard of. It was fascinating. Larry Brown to me up to that time was a basketball coach who couldn't keep a job. It was weird to see the same name on a baseball card. Just a special time of discovery during that period.
And so there you are, five vintage cards -- with a few guest-star appearances -- that I haven't written about but I probably have.
My goal is to eventually have so many vintage cards that I'll always have a brand-new-to-me vintage card to discuss here on this blog.
Because I really need to have more of these things than I do Donruss cards. (P.S., yes, I have written about the Jeffcoat card).

Old Cards said…
I like it when you write about and speak so fondly of the 60's cards. How come I knew about the Alou brothers, but not the Sadowski brothers? Speaking of brothers, Larry Brown's brother Dick played about the same time Larry did (maybe a little earlier) and has a few cards in the 60's.
May 5, 2022 at 7:45 PM

GTT said…
I think the old Topps combo cards were batter because they were more random. The Fleer just had the big names like Schmidt, Rose, Ryan etc. The guys on the one you showed were just random catchers, but they got a special card. When they'd have cards like "Brave Bombers" (purely hypothetical) they'd have Mathews and Aaron, but they'd also have Joe Adcock and Del Crandall.
May 5, 2022 at 9:17 PM

bryan was here said…
That Larry Brown is near perfection. It's right up there with his '69 card where HIS ENTIRE FACE takes up the picture.
I also love the '60s Topps combo cards, my favourites being Fork & Knuckler (Hoyt Wilhelm and ElRoy Face, 1960), Casey Teaches (Casey Stengel and Ed Kranepool, 1964) and Ted Shows How (Ted Williams and Mike Epstien, 1969).
May 5, 2022 at 9:32 PM

Jeff B - Wax Pack Wonders said…
Poor Lachemann. I actually sent him that card through the mail, which he signed. Larry Andersen was a big prankster on several teams if memory serves.

That Larry Brown card is really nice. He is on my list of Lesser Knowns.

Brett Alan said…
Take a look at Mark Canha's card in last year's Heritage...I'm going to go ahead and call it a tribute to that Larry Brown card. Also a posed card, also batting, also fully standing up, and also with everything in the frame except part of his left foot (although more of the foot is missing on the Canha). Makes me happier to own that card.
May 5, 2022 at 10:24 PM

Fuji said…
You know me too well! I actually stared at that Brown for several seconds before reading the whole "favorite card" thing. I was also marveling at the Coliseum in the background.

Bo said…
I love that Connie Mack Stadium card. The yellow pages and Alpo ads in the background! I think why the "Stadiums in decline" is interesting is because you only see color footage at the end of their long history of existence. For me, watching early-70s footage of the old Yankee Stadium is so interesting because you can see it as it really was, not in black-and-white.
May 6, 2022 at 10:34 AM