May 20, 2022
Have you voted in the first of eight vote-offs for a new entrant into the Cardboard Appreciation Hall of Fame? If not, either go to this post and comment on your pick or copy-and-paste the following link to vote: https://vote.easypolls.net/6286614c5617e80062aee2cf 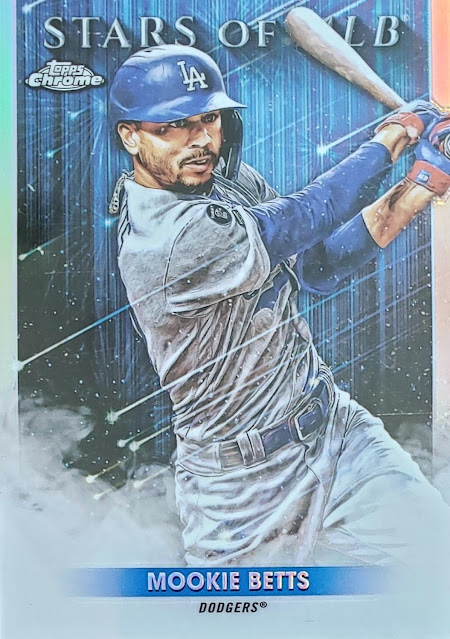 I have been valuing my trade buds a little more the last few months.
With the number of bloggers departing for greener trade pastures, or simply plain departing, the trade scene isn't like it was at all on the blogs. I used to be juggling eight, 10, 12 trades at a time and did so for years. These days, it's more like two or three.
That's OK, because life is rather busy and the fear of letting someone down because one of 22 trade overtures fell through the cracks isn't there anymore. But I really do appreciate bloggers like Cards On Cards, Dime Boxes and Johnny's Trading Spot, all of whom have been trading with me for years and all who recently sent me cards!
They clearly won't stop sending the cards, like others have. And I'm determined not to stop sending out cards, too!
Today I'm showing off some cards from Johnny, they just showed up the other day. 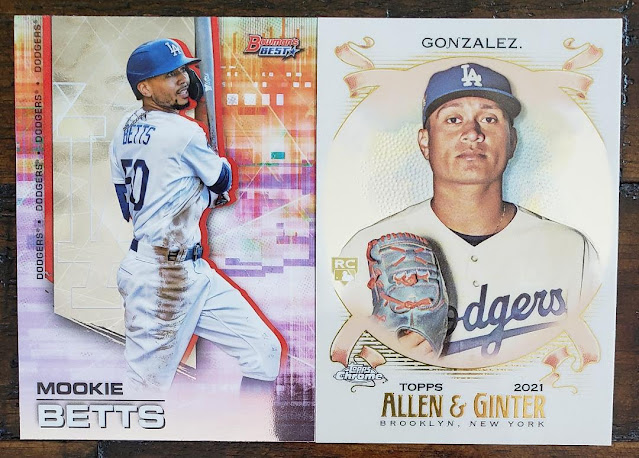 They were all current cards, and man do I need a lot of those. That's my first 2021 Bowman's Best right there and that's my first 2021 Topps Allen & Ginter Chrome card. Card companies have got to stop making parallel sets. I'm just going to stop caring at some point. 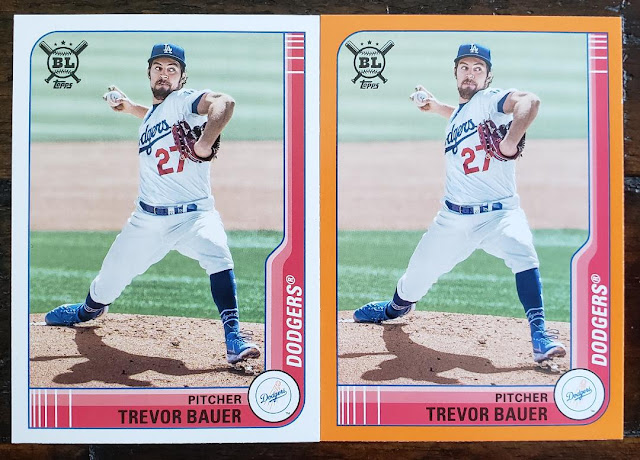 Collecting 2021 cards means forcing myself to accumulate Trevor Bauer cards. Just when I thought I was done with that nonsense, Big League shows up from the past with all kinds ugliness from last year. 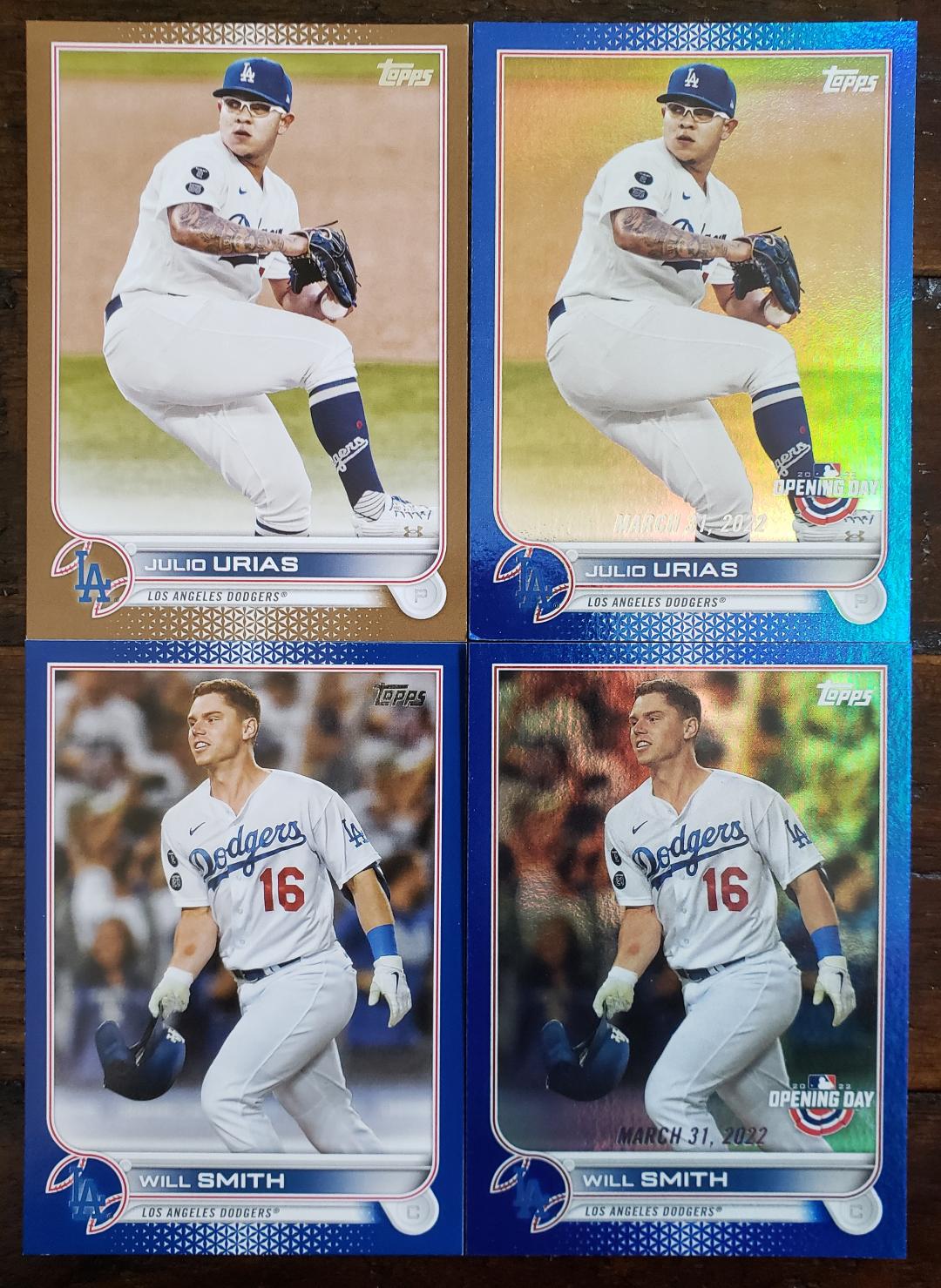 We're back to the current year with a bunch of parallels from flagship and Opening Day. Players like Urias and Smith are the best I can hope for from Johnny. He saves the Kershaws and Bellingers for himself. That'd be like me collecting Acuna Jr. and Swanson cards, and that would be pretty weird for a Dodger fan. 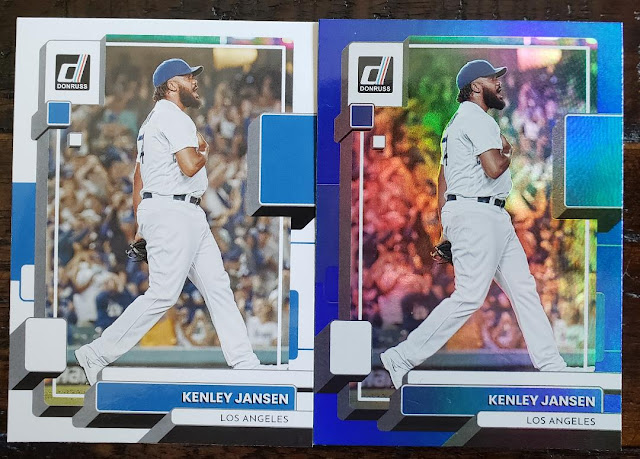 Here's a Dodger who is now a Brave. I see Atlanta fans got to experience what I've dealt with for years: Kenley's been known to blow a save or two, sometimes spectacularly.
This is the Donruss design for this year. It's very distinctive, bizarre, and I think I kind of like it. 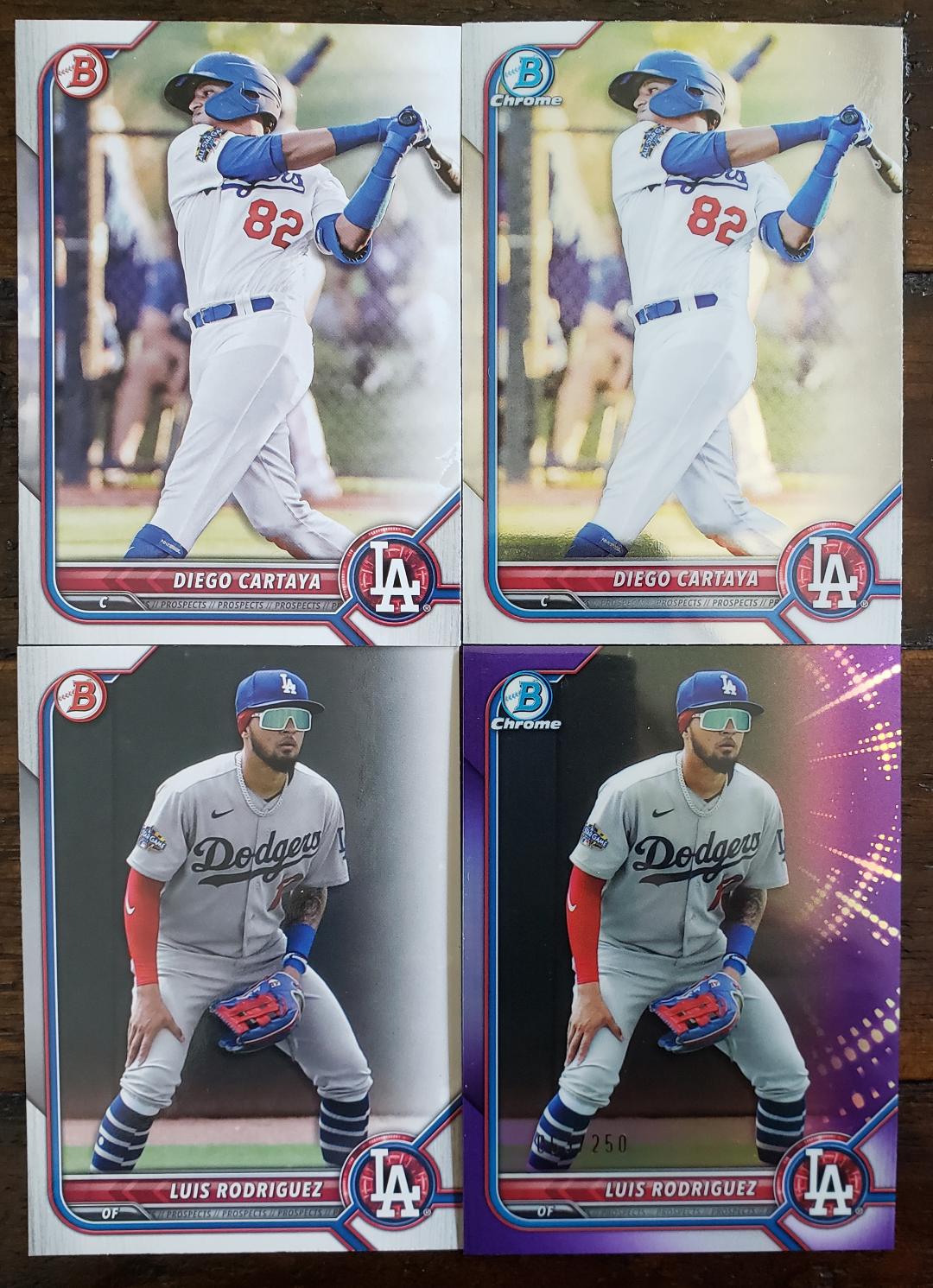 Johnny is so much more quick on the latest sets than I am. Here are some prospect types in regular flavor and parallel flavor. 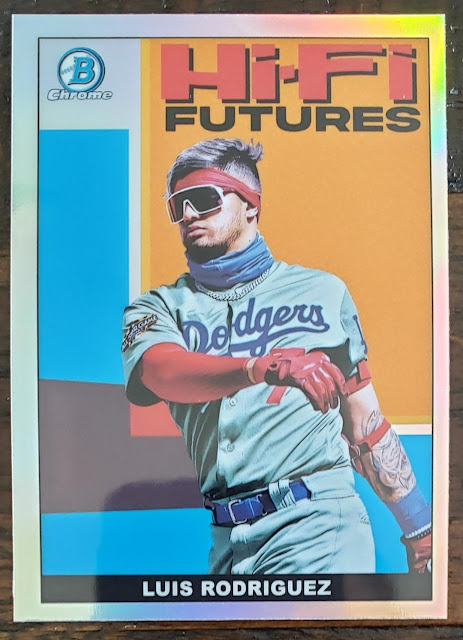 And that's a futuristic-looking insert of a futuristic-looking player. (With my cell phone reflection in the background).
I probably don't have to say it, but without these regular traders who have continued to trade through the blogs year after year, I likely wouldn't have the above cards. I'm not in the habit of regularly chasing down parallels or Bowman or most inserts.
Glad there are people who still do trades like I was doing them a dozen years ago. They're my kind of people.

Nick said…
My blog trading has really tapered off the last few years, but I like having that small core group (you, gcrl, etc.) who I randomly send cards to from time to time. I bought my first 2022 Donruss packs yesterday, and I agree with you about the design - actually don't hate it.
May 20, 2022 at 8:45 PM

Matt said…
My trading has gone way down, especially in the blogging world. I always have plenty of baseball to trade, i just don't collect a lot of baseball in return anymore and there isn't a lot of football and non sport cards to be sent back as most bloggers are baseball collecrors.

Of course some bloggers i used to trade with don't exist anymore too.

Anonymous said…
Looks like Donruss was inspired by the intrusive design of'21 Topps, but with boxes instead of shards of glass.
May 21, 2022 at 5:38 AM

Jon said…
Have you started trading on the TCDB yet? If not, I'm sure that you of all people will have no trouble in finding folks to trade with.
May 21, 2022 at 1:45 PM

Fuji said…
Trading is fun. Just wish I had time to pull them off. Between life and care packages, I've got way more on my plate than I can handle. But I'd like to think that one day I'll update my trade bait and start making some trades again with fellow collectors.
May 21, 2022 at 7:55 PM

Bo said…
I think I make about as many blog trades as I used to. In the past, they were spread out among a lot of different bloggers. These days, it's a lot of trades with a core group, including you and the others you mentioned in this post.
May 22, 2022 at 12:59 AM

Nick Vossbrink said…
My trading has dropped off a ton. I blame the fact that i'm no longer buying *any* new cards and my acquisitions have gotten even more targeted. Hard to trade with anyone when I have nothing to send.
May 22, 2022 at 9:15 AM