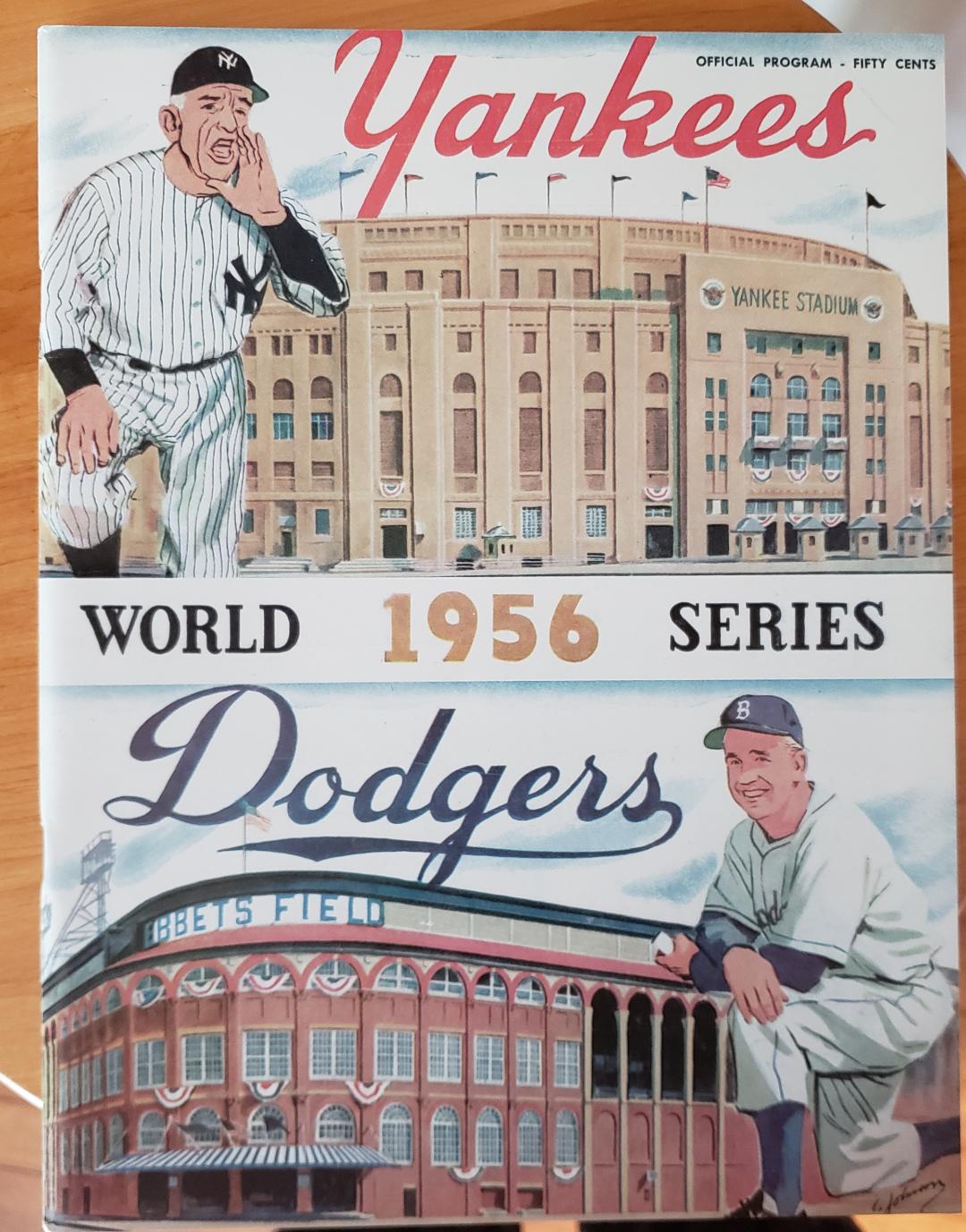 I'm returning to the fascinating package of periodicals and cards that I received from the best bubble a few days ago. Why not? It's not like I'm done filing all that stuff, and it will be awhile before I do.
I wanted to update the news on the 1956 World Series program that you and I were salivating over, the one that Don Larsen allegedly signed on the scorecard inside that documented Game 5 of that World Series, his perfect game.
Best Bubble Bob sent me an email saying he did additional research on the program and he believes it's a reprint.
Bummer.
I've never heard of yearbook reprints, only card reprints. I suppose there could be old yearbooks reprinted, although that seems a bit odd to me. But it explains why the program is in immaculate shape and why it is so readily in my possession. Bob didn't explain how he came to this decision, I'd like to know how that was determined.
It's still cool to own, reprint or not.
Anyway, I had said in that post that I'd like to go through one of the other publications that was sent with the yearbook. This one: 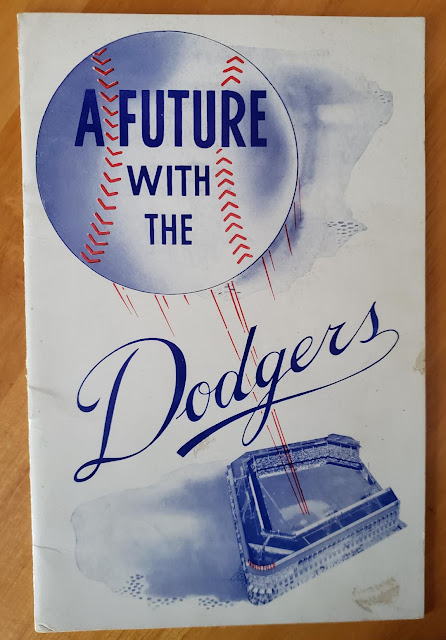 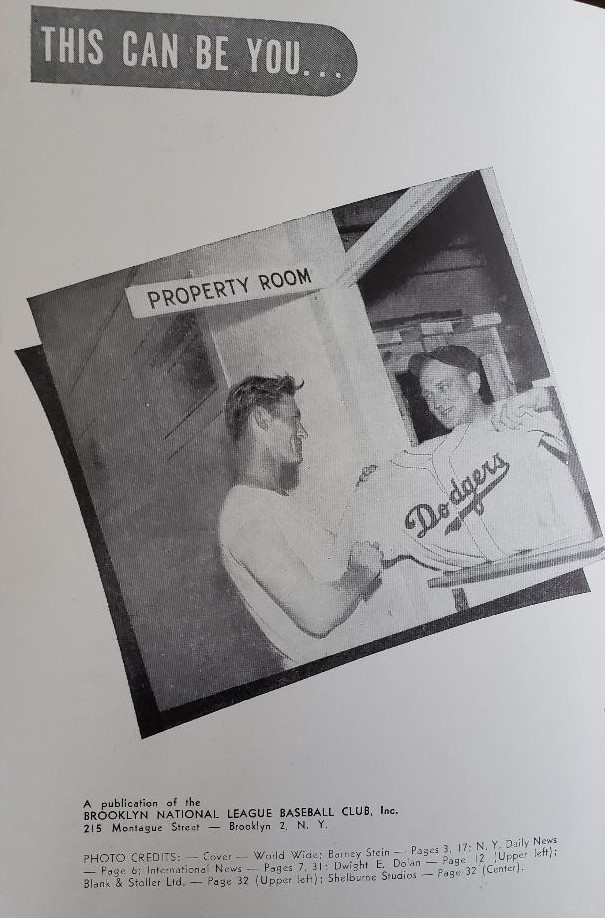 This is the inside front cover and the page that let me know that these were the BROOKLYN Dodgers we were talking about here. 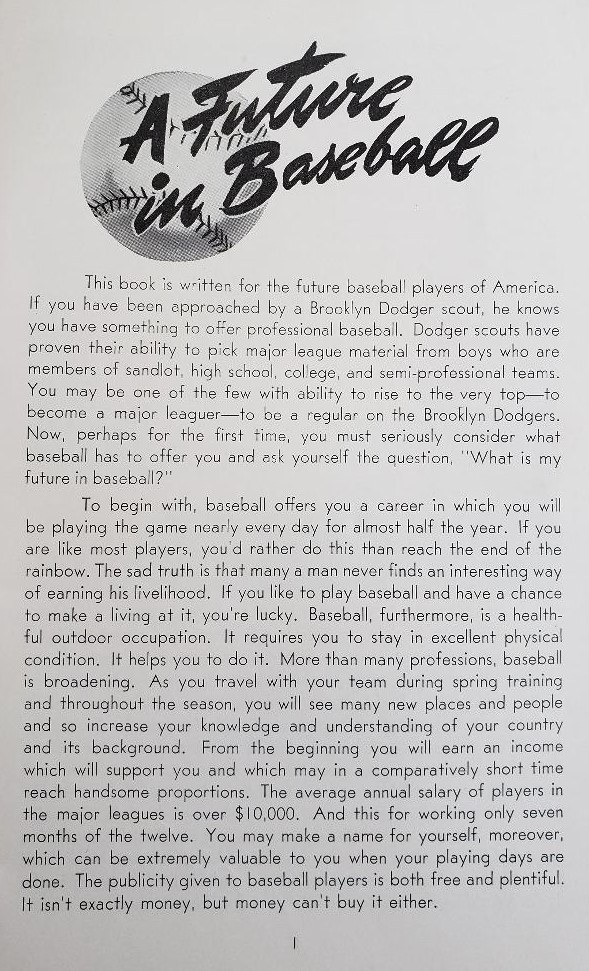 This is page one and judging by the first few sentences, I'm thinking maybe Dodger scouts gave these to players that had drawn their interest.
Much of the references in this book are wonderfully out-of-date, especially the monetary figures, an average MLB salary of $10,000.
But one thing resonates with me: "The sad truth is that many a man never finds an interesting way to earn a living." This has long been an obsession of mine. No, I never became an MLB player, but I was determined from a young age to find a profession that interested me, and for the most part I did. The number of people I've seen leave interesting jobs for mindless cubicle jobs because of the money difference makes me shake my head a little. Sure, if you need the money. But I couldn't do that for 20, 30 years. 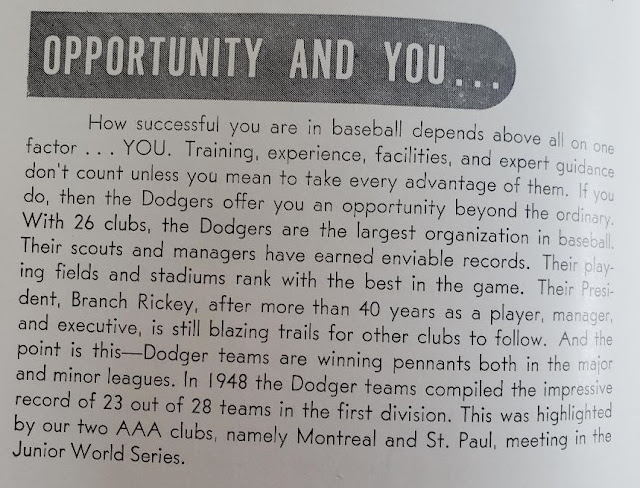 Page 2 is where the Dodgers start laying it on thick. "The Dodgers are best at this and the best at that," is the general theme of this publication.
Twenty-six clubs in one organization is mind-blowing. It's always been other-wordly to me. When I started following baseball, teams had like 5 or 6 minor league affiliates. 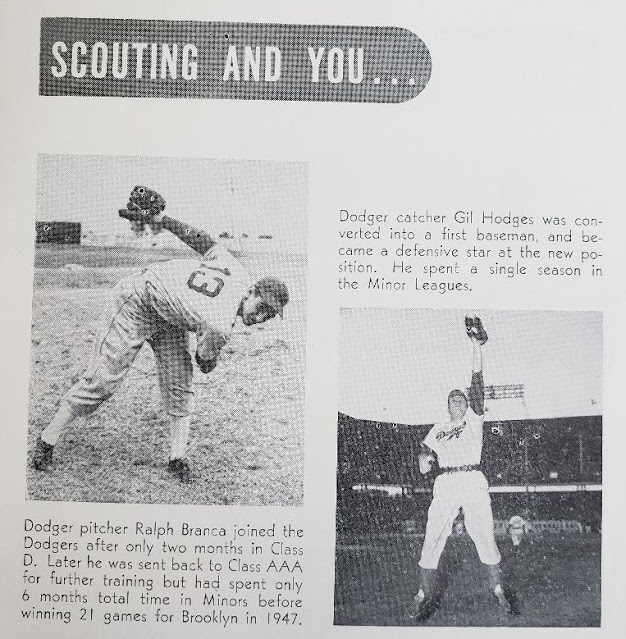 A couple of pictures of some players who would become well-known in Brooklyn Dodgers lore but were just establishing themselves as major league players in the late 1940s. 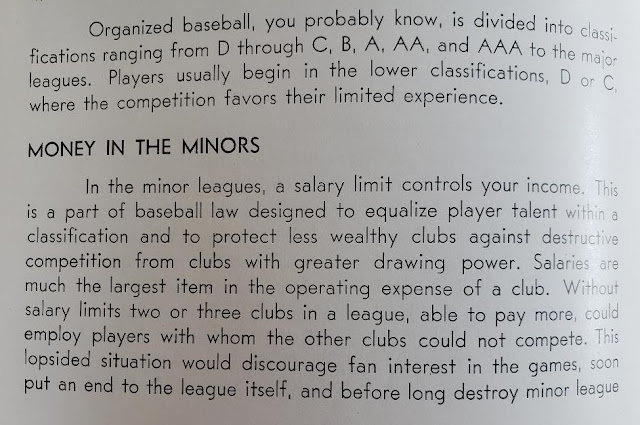 Here we get a look at the philosophy of paying minor league players that has been the party line in organized baseball for ages and has helped lead to the lousy conditions that players on the way up experience.

This is where the Dodgers dazzle you with that $5,000-per salary and then prepare to lay the hammer with three ways in which the organization is superior to any of the others.
I admit, as a Dodger fan, I've been swayed, I do think they are one of the most well-run organizations in baseball and have been since the days of Branch Rickey. The Dodgers, Yankees and Cardinals are pretty much known as the best-run organizations in baseball for years and years and years. Not coincidentally, they are among the most disliked teams by a lot of fans. Jealousy is ugly. 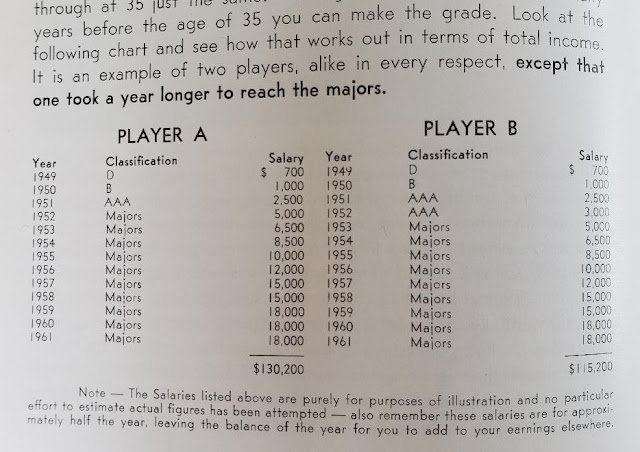 On page 8 is a segment on how quickly players go through the Dodgers organization compared with other organizations and how important that is for earning a salary. This breakdown is interesting just in viewing the final totals. That's a yearly salary for some average folks. Not me, of course. But I could get there with a little bit of time. 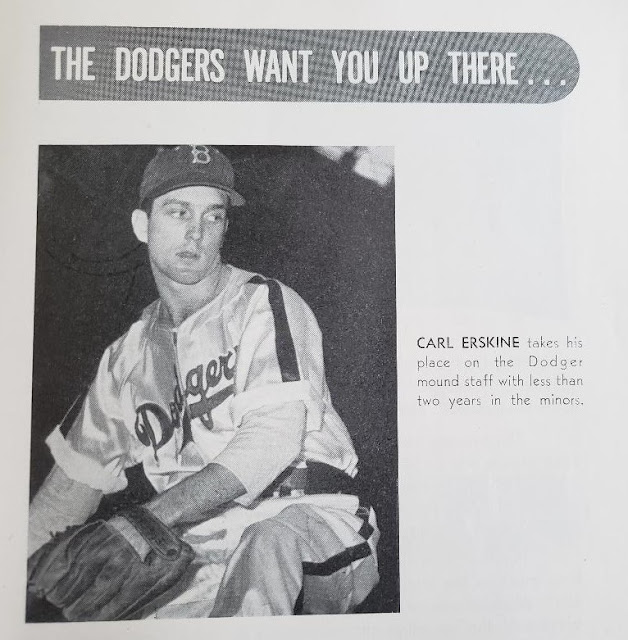 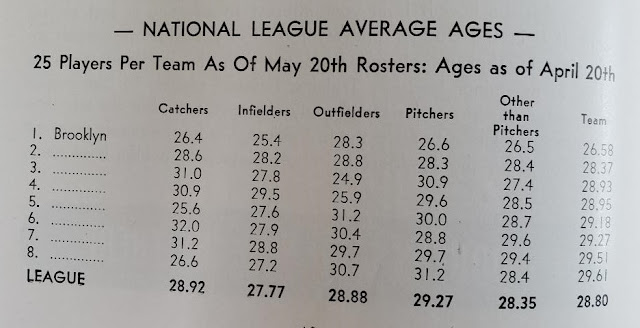 Here, the Dodgers show you the average ages of the players by position in 1947. The Dodgers are easily the youngest, which is supposed to show that it takes players less time to go through the minors in Brooklyn than the other NL teams, which you'll notice are not named. 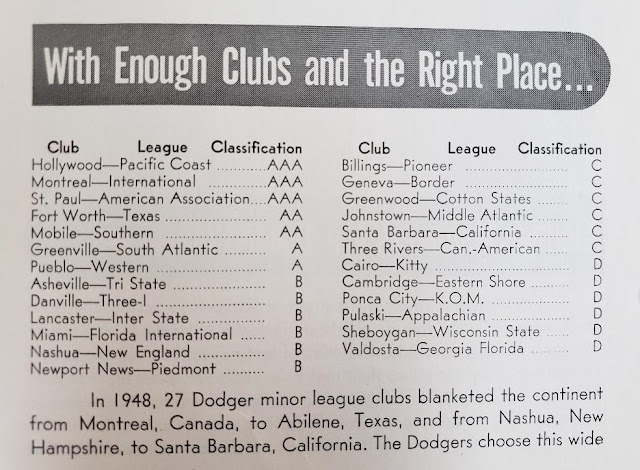 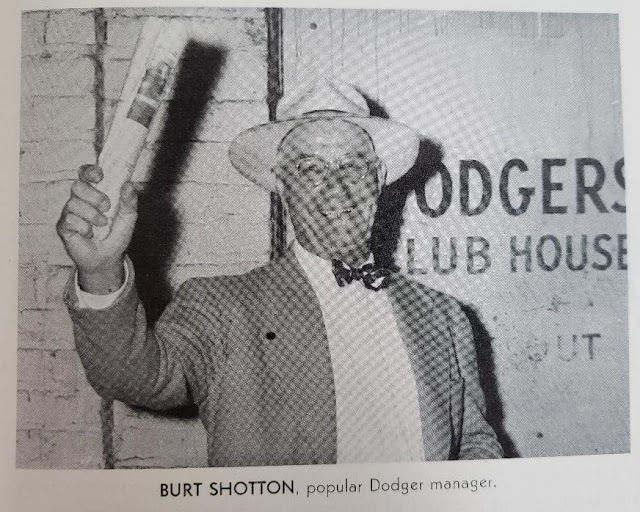 Burt Shotton was the Dodgers' manager between 1947-50. "Dodgers managers are trained managers ..." the publication states. 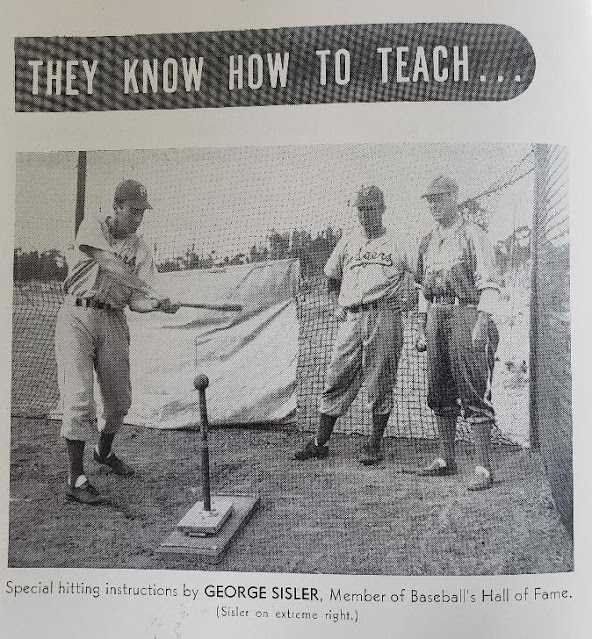 The Hall of Famer George Sisler is wearing one of the blue-satin uniforms. I imagine seeing the old St. Louis Browns player from the 1920s wearing a blue-satin uniform was as jarring as seeing Yogi Berra in a rainbow Astros uniform in the 1980s. 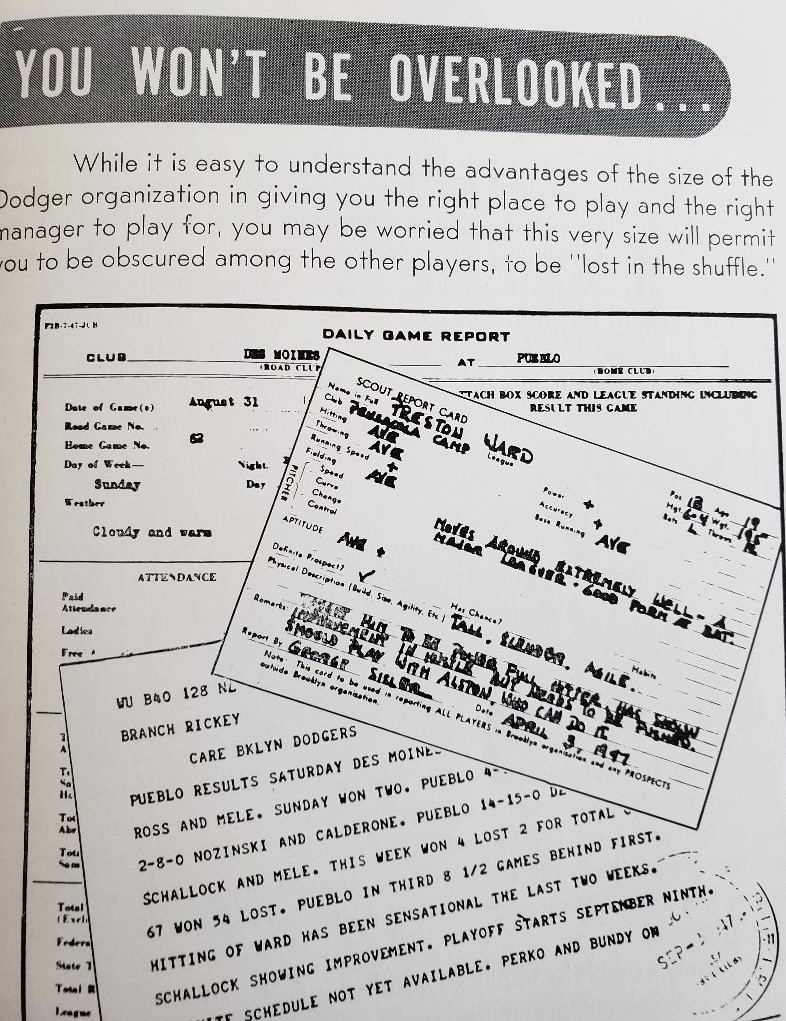 While the Dodgers organization was larger than any other it didn't want to scare away players who thought they'd be lost in the shuffle. Here is a report card from George Sisler on a prospect named Preston Ward. Ward had a long career in MLB through the 1950s, mostly for the Pirates and Indians. 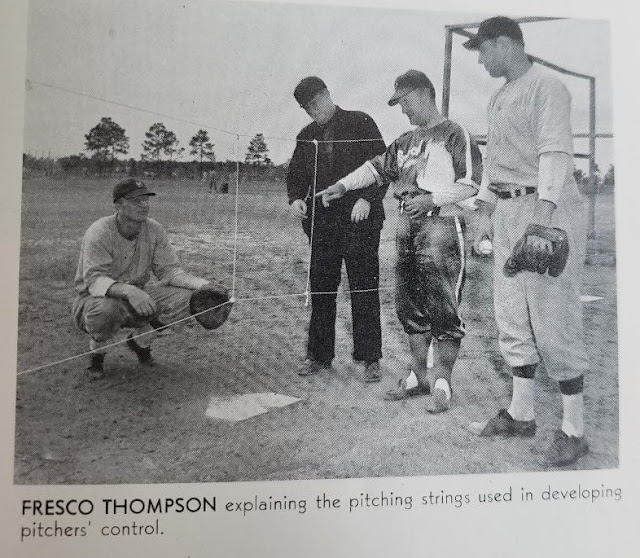 Here is where the Dodgers become Dad. No drinking and carousing! You won't be a winner! 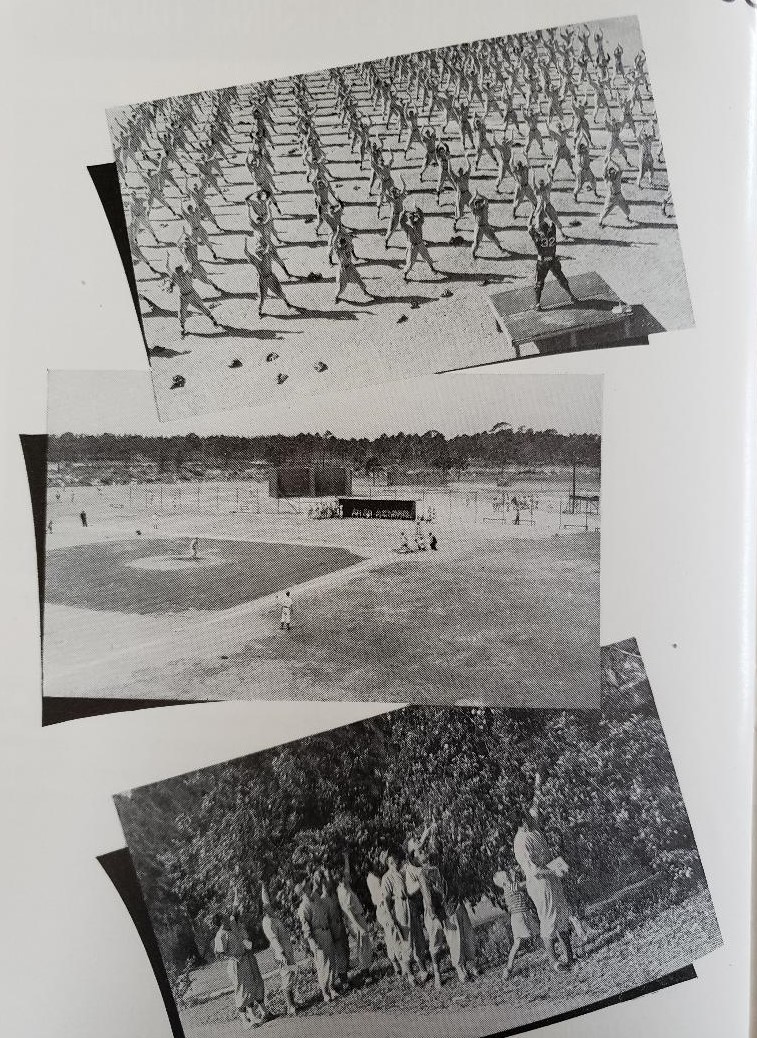 A few photos at the center of the book. The players picking oranges is interesting. 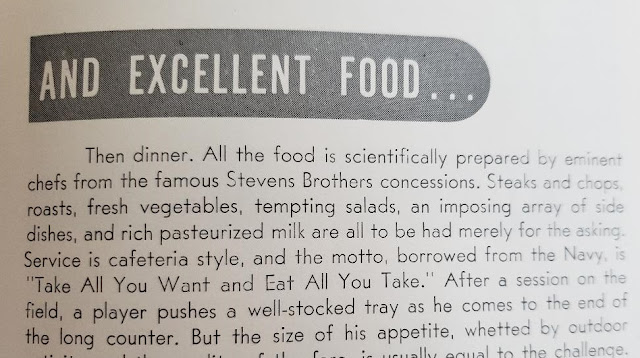 The Dodgers have thought of it all. They have the best of everything! WE HAVE THE BEST FOOD, TOO!!
Food from the 1950s and earlier fascinates me. It seems to be meat, potatoes and vegetables and nothing else. (Well, there's rich, pasteurized milk). This sounds quite boring to me. I don't know how my parents didn't fall asleep at the table.
The Dodgers wanted you to know there is also spare time where you can swim, play shuffleboard, croquet, billiards, table tennis, chess or checkers.
Before the 32-page manual signs off, it reminds you again in one of the few bold-face sentences in the book: "Remember, in 1948 the Brooklyn organization experienced the remarkable record of having 23 of its 28 clubs finish in the first division."
In closing, there is a photo of the gathering after the Dodgers won the National League title in 1947. 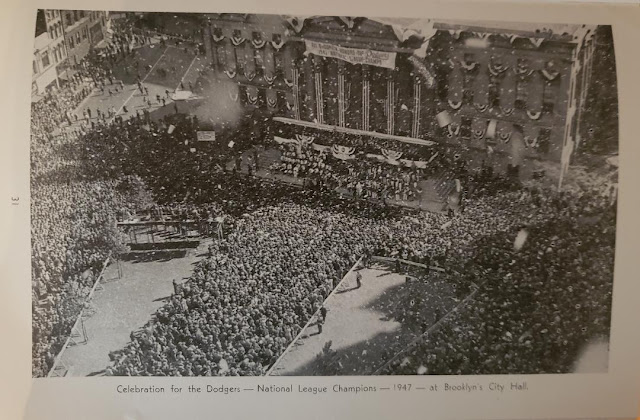 That's a hard sale right there.
But, like I said, the Dodgers got me for some of the same reasons: They're well-run, they compete almost every year, they're not screw-ups like some organizations. Brooklyn had all those advantages and then they moved west and added the advantage of nice weather. Why wouldn't players want to play for them?
(Have you voted in the first of eight vote-offs for a new entrant into the Cardboard Appreciation Hall of Fame? If not, copy-and-paste the following link to vote: https://vote.easypolls.net/6286614c5617e80062aee2cf

Old Cards said…
What a great insight into a time period that seemed so simple. I am not an avid fan of the Dodgers, but I avidly pulled for them in the World Series every time they played the Yankees. Their history shows them as a class organization.
May 22, 2022 at 8:52 PM

Johnnys Trading Spot said…
I probably should mail out that other stack of Dodger crxxx um stuff I have. LOL.
May 22, 2022 at 9:02 PM

Bo said…
That was interesting and fun to read. I wonder how many prospects would have read this and come to the conclusion that they would make the major leagues faster in an organization where the big leaguers are older and there's not as much competition in the minors?

Is that Chuck Connors in the front photo? That is the year he played for them.

The bit about "well-conditioned, clean-living teams will win more pennants" is funny given what happened two years later with the "nice guys finish last" team.

Stevens Brothers concessions did the concessions for all the New York teams for many years. (Company is now called Aramark and is a giant in the industry)
May 22, 2022 at 10:36 PM

Fuji said…
Pretty cool collectible. I'd love to see what the A's hand out to their prospective ball players. "Our stadium sucks and we won't ever pay you the big bucks, but we will give you free jalapeños with your nachos."
May 23, 2022 at 10:47 PM

Kevin said…
What’s interesting about this is it predates the mlb draft when a player could sign with any team...this was the Dodgers sales pitch. Makes me wonder with so many farm teams, were there players that may have been quality big leaguers stuck playing for the Dodgers multiple A teams?
May 24, 2022 at 2:44 PM

jacobmrley said…
This is absolutely fascinating. I've seen things like this for ordinary jobs but not for a baseball organization. Neat stuff indeed.
May 27, 2022 at 4:25 PM