Feel like I'm losing touch (but I'm probably not) 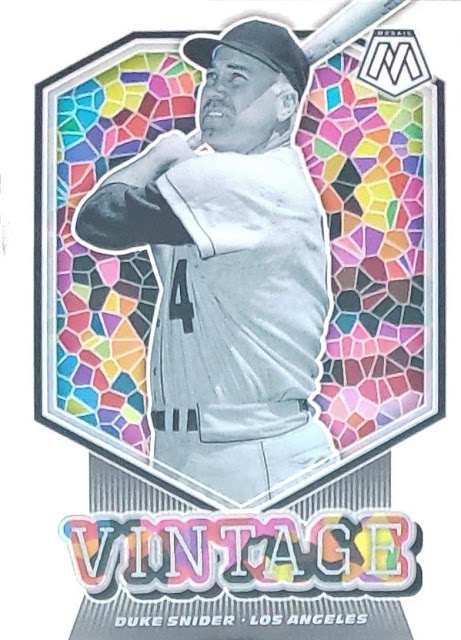 Trading Card Database announced its site's end of the year awards yesterday and Night Owl Cards is your favorite card blog once again! 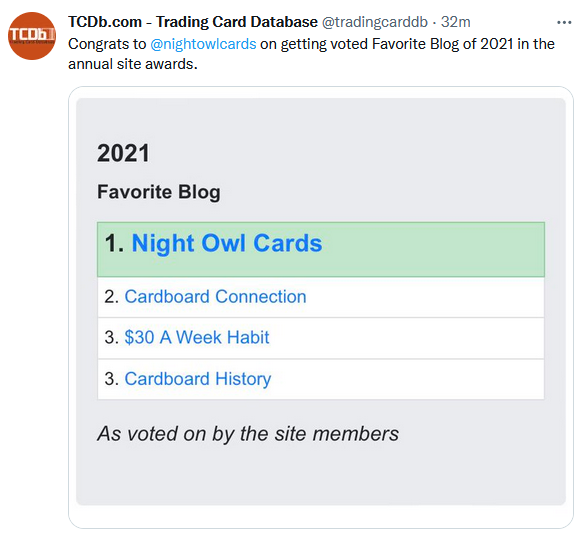 Thanks for continuing to read my nonsense after so many years. Sometimes I feel like that rock band that has overstayed its welcome. But stuff like this helps me know I should continue.
You'll note a couple of familiar blogs also on that list and the two tied for No. 3 are well-known TCDB users and promoters, at least that I've seen.
I am not. I don't have anything against the site at all, in fact I think it's great. I simply am late to the party and haven't had the chance to get involved in everything TCDB has to offer, so it feels weird to be honored without taking part like those other blog operators.
I'm late to the party in everything having to do with the hobby and it seems more so the case the last few years. As I pull away from modern cards, I am starting to lose track of what sets there are. I've long since stopped paying attention to release dates, and I'm always playing catch-up with my team set want lists.
It feels like I'm losing touch and things like this ain't helping: 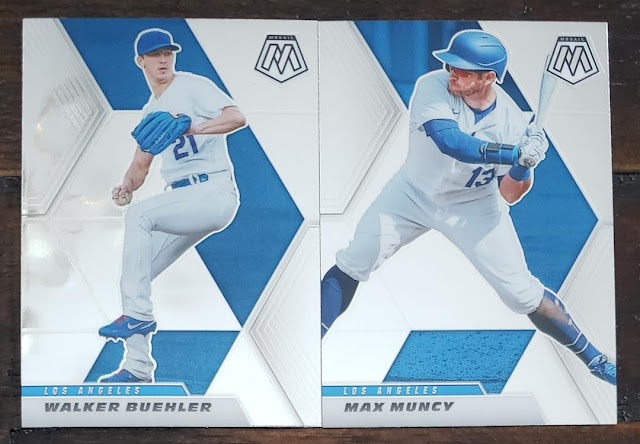 Well, now, what the heck is this?
That's what I said to myself when I pulled these cards out of an envelope from Cards On Cards that arrived last week.
Cards On Cards is always so on top of this team set stuff, he's involved in a lot more team group breaks than I am. So he probably knew what this was already, but I had to look it up for this post. It's called Panini Mosaic, and just as I suspected, it was once one of the zillion "sets" in Panini Chronicles and now has spun off into its own set because we need more silvery sets to buy, I guess.
Outside of the usual infinite parallels, I don't see much different between this set and Panini's Prizm metallic thing. You've seen one generic ballplayer in front of a generic silver background, you've seen them all. I know that competition is good but my hope is Fanatics ignores Panini so I don't have to accumulate cards like this anymore (I suppose I could just stop paying attention to them, but that switch is so difficult to turn off). 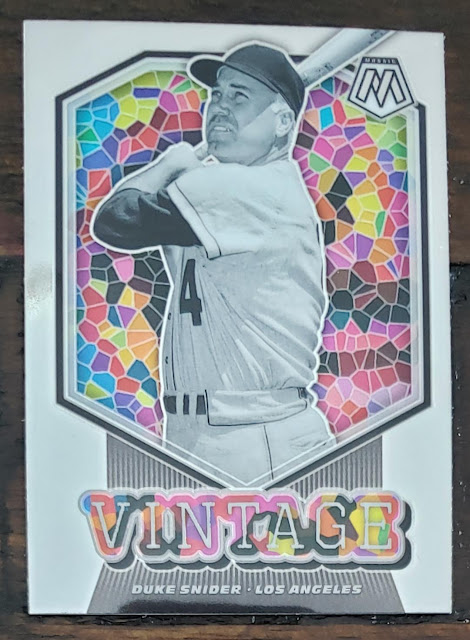 This is colorful, but odd. I'm imagining the late, great Duke Snider being handed this card and what his thoughts might be. This was a guy who used to complain about the money bonus babies were making back when he was a veteran player. 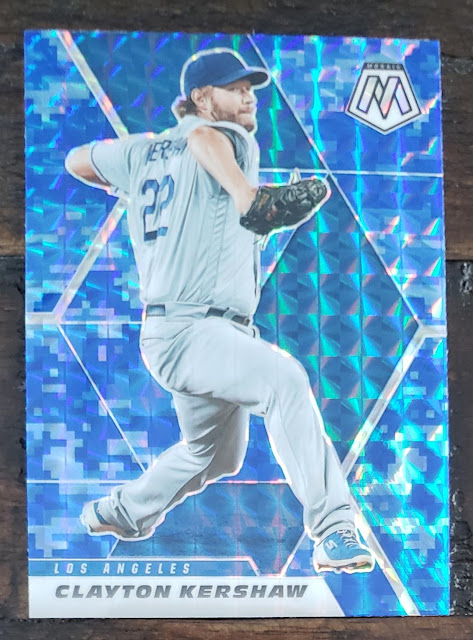 This is a nice card that distracts me from Kershaw's empty cap. I'm glad I have it. I will not be able to tell you what kind of parallel it is, as Panini is naming things "red fusion" and "nebula" and "peacock." It's like using the liquid soap in the bathroom that is labeled "sweater weather" and wondering what kind of smell that is. 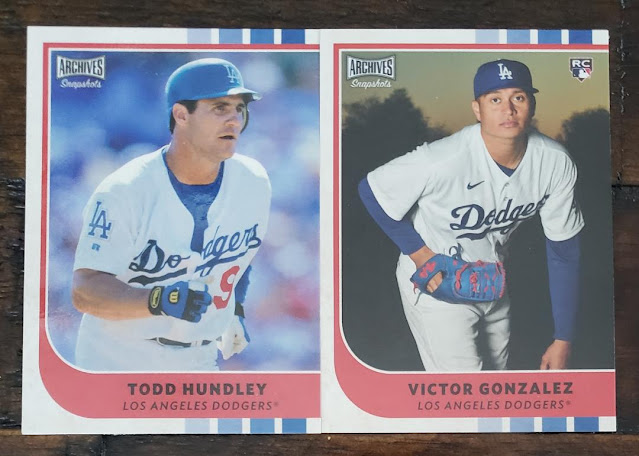 2021 Topps Archives Snapshots was released, too. Did you know that? I had no idea.
At least I know what this one is. I've never known why it exists (yeah, I know, the autographs), and I'm always behind in getting the Dodgers. Still working on those cards from 2019, or maybe it's 2018.
Victor Gonzalez seems to be in everything now, but the Todd Hundley retro card is certainly different. It makes me nervous that Topps is done recognizing '60s, '70s and '80s players and jumping all the way into the 21st century when there are clearly many deserving players from 40 years ago who get ignored. 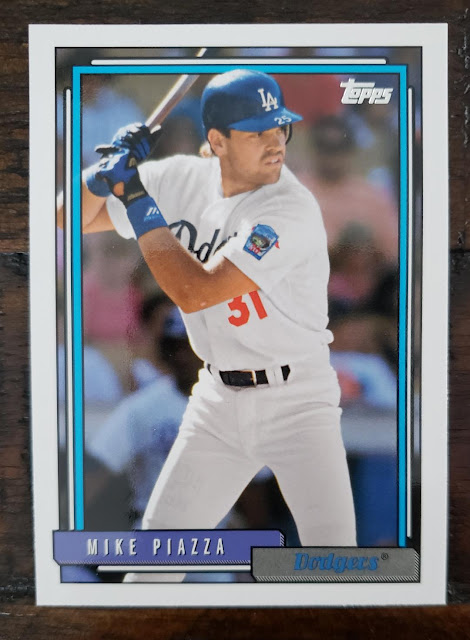 This is what I was referring to in the post the other day. This is a 2021 Update card of Mike Piazza on the 1992 Topps design. So it's one of those "Topps Redux" inserts in which the '92 design is used, right?
Nope. It's a "Card That Never Was" insert using the '92 design.
Come on Topps, I get only two days off a week. 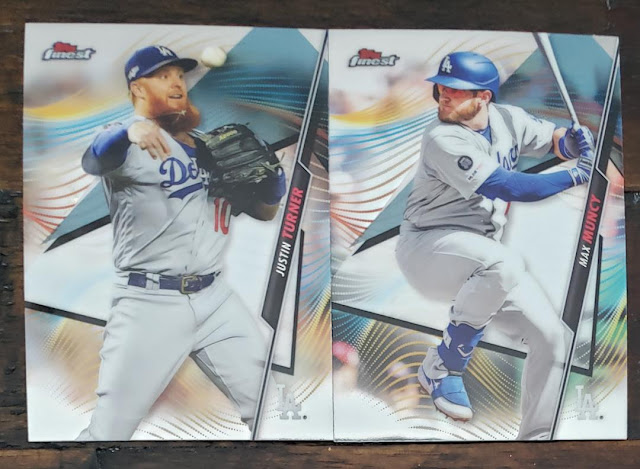 The Diamond King said…
This post has a lot I agree with. Who needs all the myriad stuff out there! Why make so much and so much that is the same? And yet, if presented with some of it, I will always take it and lovingly store it in an organized fashion. I'm sick! Oh, and congrats on the TCDB Blog of the Year!
January 10, 2022 at 8:07 PM

bbcardz said…
Congratulations on winning the TCDb Favorite Blog of 2021! I voted for you because DODGERS! (Your writing skills, perspectives and humor also helped.) Hopefully they'll send you a trophy or maybe even some TCDb merch from https://www.bonfire.com/store/trading-card-database-store/.

I share much of the same sentiments as you about many card products. But I don't feel like I'm late to the party. We're all in the party house but and most of us are in the party room that appeals most to us.
January 10, 2022 at 8:22 PM

I did pick up a parallel from that Archives Snapshots set online. It's a nice enough card, but that set has always been about the photography, and this design is way too busy for that. Disappointing.
January 10, 2022 at 8:23 PM

GTT said…
Congrats on being number #1! I was slightly tempted to vote for myself, but voted for you. I really appreciate how you have a post almost every night.
January 10, 2022 at 8:56 PM

MikeSchmidtHappens said…
Congratulations on your well-deserved award!
January 11, 2022 at 10:26 AM

Matt said…
As long as you are blogging, you are going to win these "Best Blog" awards. This is how it should be to be honest - recognition not due to political stumping or a strait up popularity contest - but because you are a professional writer who regularly crafts entertaining content that people actually enjoy reading. You're the Babe Ruth of our hobby's blogging community, and we're all grateful for what you do. Congrats!
January 11, 2022 at 10:44 AM

cynicalbuddha said…
First congrats on the award from TCDb. It just goes to show how much you do for the hobby, whether you mean to or not. Second don't feel guilty about not using the site. It'll be there if you need it. I've been a member since 2009 and just recently started to actually use the site for inventorying my collection (which is great) and I'm slowly starting to use the site for trading, which with its new tools is also great. The fact is the TCDb site from 2009 is nothing like the site of today (although they look basically the same). I love the fact that it's crowd sourced for the most part and the community it provides, but all that takes a quite a bit of time to get the most out of the site and it can be daunting.
January 11, 2022 at 10:52 AM

Billy Kingsley said…
Considering how little card posting I actually did in 2021 I'm surprised I even ranked at all. Congratulations on the well deserved victory.

Make sure to check back on the winner thread because you've already got offers to get Dodgers sent to you. Mark's a good guy, he just lost his dad this week but is still thinking of other people. That's the kind of community that's there. The Pay it Forward thread has over 2500 posts, all of which are thank yous to fellow collectors.
January 11, 2022 at 12:15 PM

BillK21093 said…
Greg:
Congrats on the award. I laughed out loud of the concept of "Sweater Weather" as smell for hand soap.

I agree, way too many issues and parallels to keep track of, with wondering if Topps had made it or never made it.

Keep up the fine work that you do with the blog.

Nick said…
A very well-deserved award! I actually opened a pack of that Mosaic stuff, and what you said is spot on - I kept confusing it with Prizm and all the other faux-shiny Panini sets out there.
January 11, 2022 at 8:31 PM