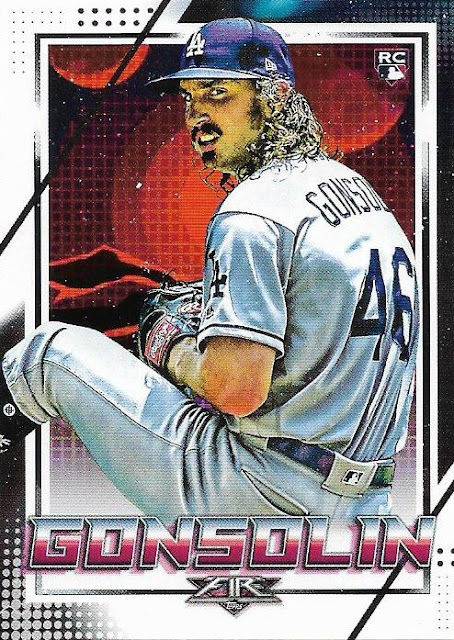 I just finished two card projects that I conduct at least annually, only this time I did both at the same time, which I don't recommend.
I updated my Dodgers binders, which I do twice a year. I try to coordinate them with card show visits, but you know how card shows went this year.
I also finished adding all the new Dodgers duplicates to my giant box (and many smaller boxes) of Dodgers dupes, a grueling process that is worth it because it usually unearths a card or two that is actually not a duplicate (I found two this time).
It feels good to complete both of those hobby tasks, and at the end of the year as well. We're getting to the final few days now, which is a good time to see how many 2020 Dodgers I accumulated this year.
I was particularly interested in finding this out because, as you know, it was quite difficult to track down cards this year. Surely that had an impact on how many 2020 Dodgers I landed.
I counted them all up and I came to a total of 332.
And, yes, that is a small total in comparison to previous years. But there are a lot of variables that go into that number.
1. Yup, card aisles were empty, almost every time I checked one, from May to December.
2. Because card aisles were empty everywhere, many of my usual card blogging trading friends didn't have a lot of 2020 Dodgers to offer. (But several still did and I'm grateful).
3. I've been pulling away from current cards for 7 or 8 years now and every year the enthusiasm for "new" diminishes.
4. Just because it's the end of the year doesn't mean I can't continue to add 2020 Dodgers cards, and I will in the years to come. I'm going to show the previous yearly totals for Dodger cards since I've run the blog and in each case, I added lots of that year's cards after that year was over.
Here is the rundown:
2020 - 332 (so far)
2019 - 463
2018 - 626
2017 - 504
2016 - 479
2015 - 508
2014 - 566
2013 - 618
2012 - 440
2011 - 539
2010 - 469
2009 - 617
2008 - 737
All right, in general there is a slow decrease in the amount of Dodgers each year, but it's not particularly obvious. The totals are the highest the first two years of the blog because that's when I was the most enthusiastic about current cards (it also helps that 2008 had mammoth sets like Documentary and Moments & Milestones, plus a separate 50-plus card Dodgers team set).
The other years in which I've exceeded 600 Dodgers I can attribute to flagship parallel madness (2013) and the anniversary team sets at Dodger Stadium (2018), kindly sent to me by bbcardz.
I'm not concerned about the 2020 total for several reasons. I'll be gathering a lot of 2020 cards in 2021, no doubt. The sets that I'm particularly lacking from the past year are Chrome, the Topps holiday set, anything from Bowman, Topps Gallery and the Topps Heritage High Numbers set, which hasn't even been released yet.
In six months or more, that 2020 total will likely be comparable to some of the previous years, such as those years in the 400s. Time will tell.
So, although the total is obviously lower and there are some notable holes in the Dodger collection this year, there's nothing much to worry about. I certainly don't need to try another avenue to find the Dodgers I need.
I'm still receiving cards that I want through the blog and still making trades, and although people like to consider 2020 the worst year ever, I'm happier than ever with my collection and what I am obtaining.
Carry on.

Nachos Grande said…
How do you keep track of all your numbers? Inquiring minds want to know, especially since I've only recently begun to try and use TCDB (I can't imagine using that for team sets though, it's bad enough for adding cards of a single player)!
December 21, 2020 at 8:08 PM

For this exercise, I just counted up the binder pages filled with Dodgers. By hand, basically. It took only a half hour. But I have the numbers on file now for reference and additions.
December 21, 2020 at 9:25 PM

bbcardz said…
Thanks so much for mentioning me. :D I'm more than happy to do my part in spreading the Dodger love, as you have done for me. I can't wait for fans to allowed back at the ballparks. Every season I eagerly check the Dodgers promotional schedule to see when they're giving out cards. Hopefully the Dodgers will do it again in '21.
December 21, 2020 at 9:25 PM

Fuji said…
In regards to the hobby and collecting... 2020 has been a-okay with me. I know people are bummed that there aren't boxes sitting on shelves at Target, but that's probably a good thing for me, because I really shouldn't be spending my money on blasters.
December 21, 2020 at 10:05 PM

RunForeKelloggs said…
I am impressed that you can find time to finish such a project each year. I can't manage to finish anything that I start. Maybe in two years when my youngest goes to college.
December 21, 2020 at 10:31 PM

Nick said…
Even with the flipper crowds, I've still managed to accumulate a decent amount of 2020 Flagship, Heritage, Big League, etc. But I still haven't found a single pack of more fringe sets like Topps Fire or Chrome anywhere -- it's the first year I can remember where I just plain haven't seen certain brands I know have been out for a while.
December 21, 2020 at 11:15 PM

Chris said…
It's interesting to see your totals since you have access to more cards that many of us - even without relying on retail. I think I have about 20-25 Red Sox from 2020, most of which arrived from Nachos Grande's box break of Heritage. I can count on one hand the number of flagship Red Sox I have - and in almost any other year I've overflowing with Sox dupes by August.
December 22, 2020 at 8:17 AM