Dodger blue (and a little green) 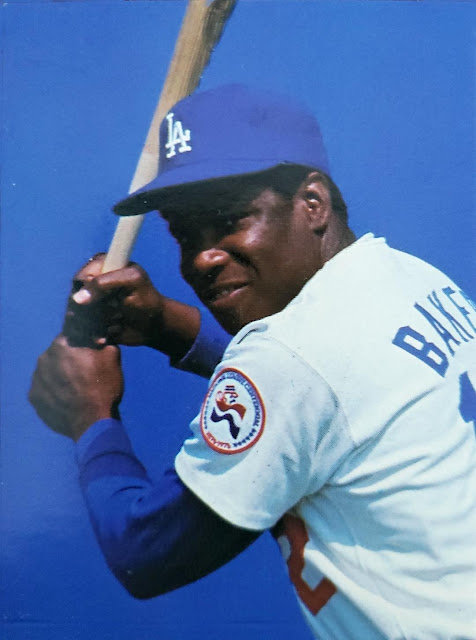 One of my favorite little oddball sets from the 1970s doesn't have anything to do with Kellogg's, Hostess, TCMA, Burger King or the Fleer World Series sets.
It's a Dodger-specific issue, but I know almost nothing about it, and even the Great Big Book of Everything Cards, the Standard Catalog of Baseball Cards, acts mysterious. "Presumed to be a collectors' issue," it says, "due to the lack of sponsors or licensors logos."
Even the name is a little bit in dispute. I know it as the "1979 Go Dodger Blue set" because that's what it says in bright blue letters on the back, with an exclamation point. The Standard Catalog calls it simply "1979 L.A. Dodgers".
I figured that with the "rah-rah" style of the back that it was some sort of stadium-issued set, but now I'm a little bit fascinated with how it was issued. This was pretty much before the card shop boom, was it some sort of mail-order deal? Were they given out on a Saturday during a big bonanza car dealership sale in Hollywood?
Anyway, the point is, I've completed the set.
It's just a 15-card set. I've had 10 of the cards for quite awhile, sent to me in a blog trade, I think. And I've received a couple copies of the Ron Cey card over the years. It was time for me to finish it off, so I found someone selling the full set and got the five cards that I needed plus a few dupes. 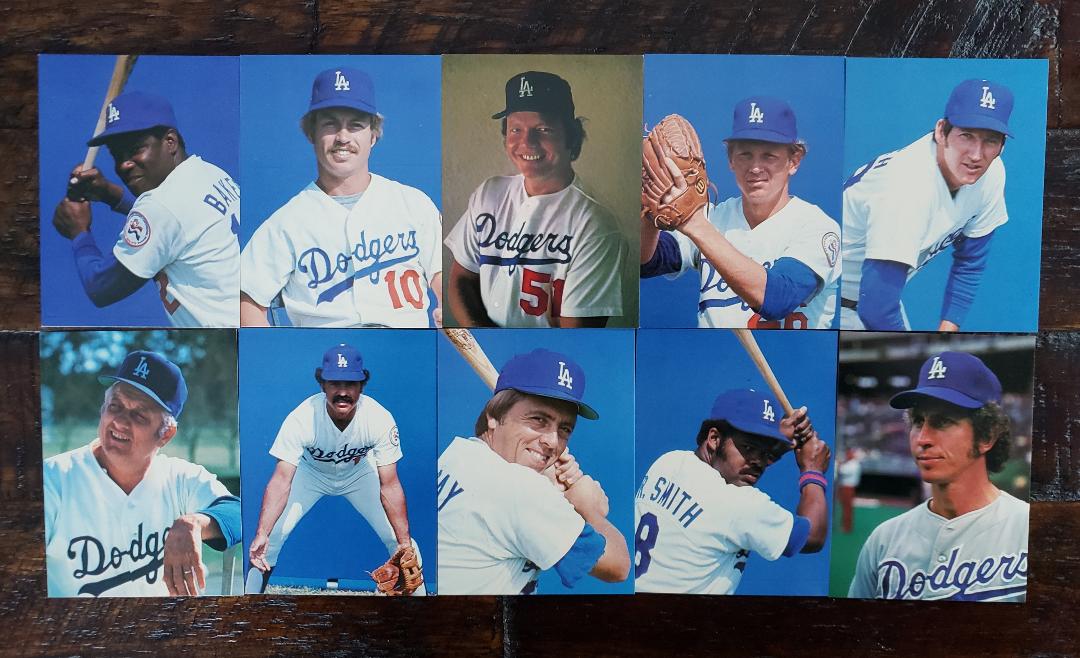 These were the cards from the set that I had already. Note the full-bleed treatment and the lack of any wording. Kind of ahead of its time (or behind its time if you're thinking about 1953 Bowman). 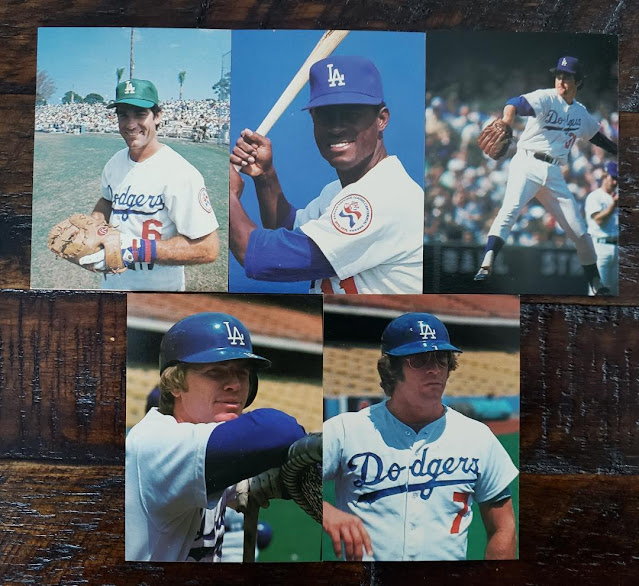 Here are the cards that I needed to complete the set. I know these guys by heart but for those trying to catch up, that's Steve Garvey, Manny Mota, Doug Rau, Bill Russell and Steve Yeager. 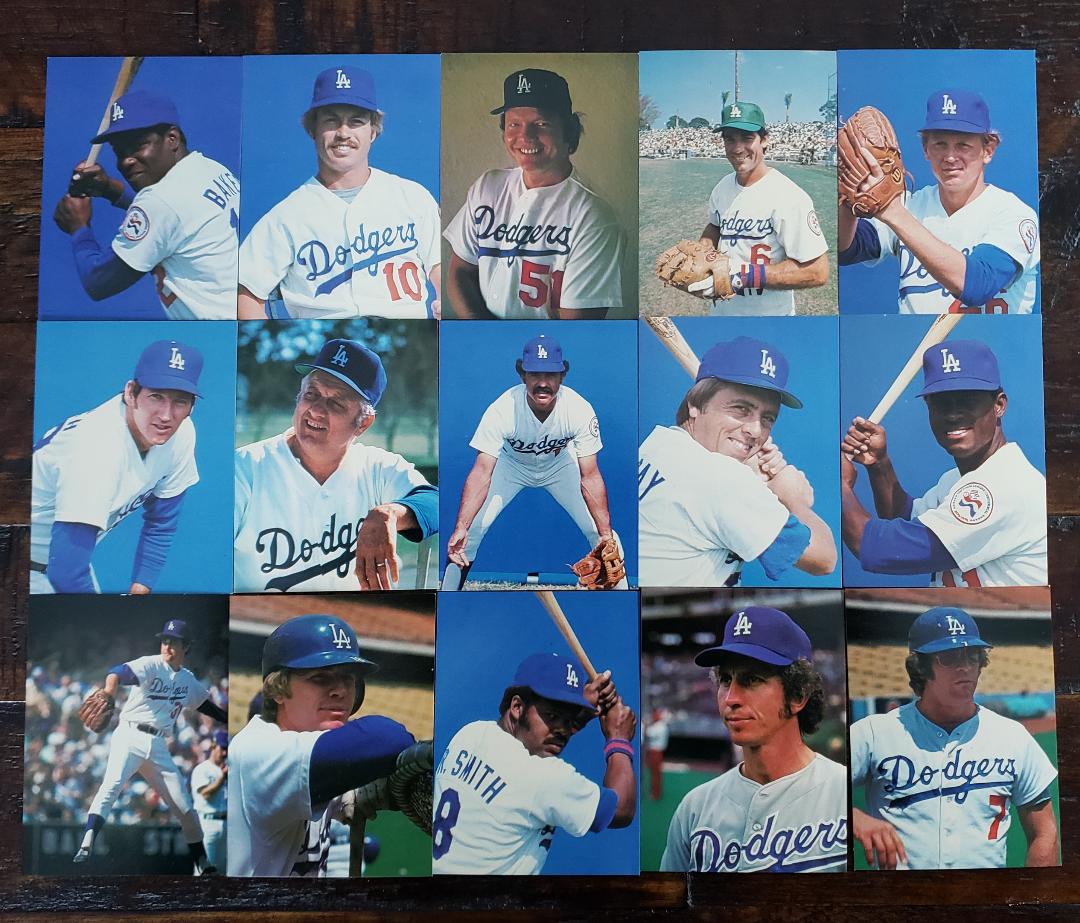 And here is the whole assemblage.
1979 was a year of transition for the Dodgers, so there's no Tommy John or Rick Rhoden (on the outs) but also no Jerry Reuss or Rick Sutcliffe (on the ins). I'm a bit disturbed about the absence of Bob Welch, although he was dealing with addiction issues at the time so maybe that's why he's not there.
You will note a fairly recent arrival in the 15 though with the card of Terry Forster. You could probably tell there was something different about his status with the team just by looking at the card. While the other players are either posed against a blue wall or in action, Forster looks like he's grinning in front of a some off-green concrete inside the stadium underbelly.
There is some green peeking in behind Lasorda and Sutton, too, as they're outside. One of my favorite parts of the set is how BLUE it is and the RIGHT KIND OF BLUE, too. The Dusty Baker card in particular. 😍WOW😍.
So I wish they were all like that, but then there wouldn't be this wonderful thing: 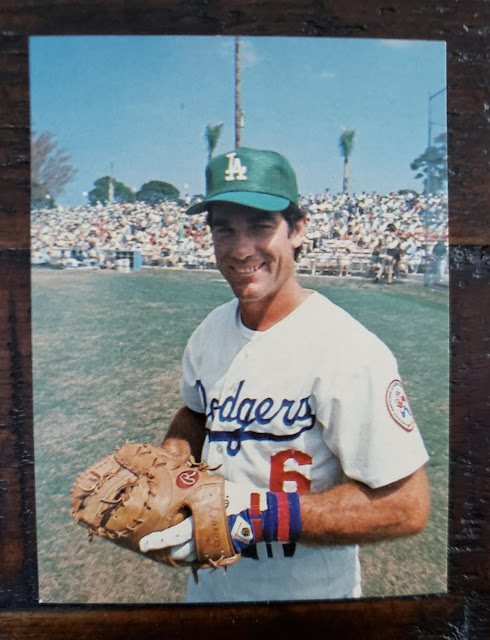 Steve Garvey is wearing the St. Patrick's Day hat the Dodgers customarily wore (maybe they still do?) at the time. They used to be the only team that did that until others picked up on it.
It's always charming when I see the Dodgers in green hats (or the Reds, for that matter). And I still do have an actual snapshot of Garvey in a green hat that was sent to me. 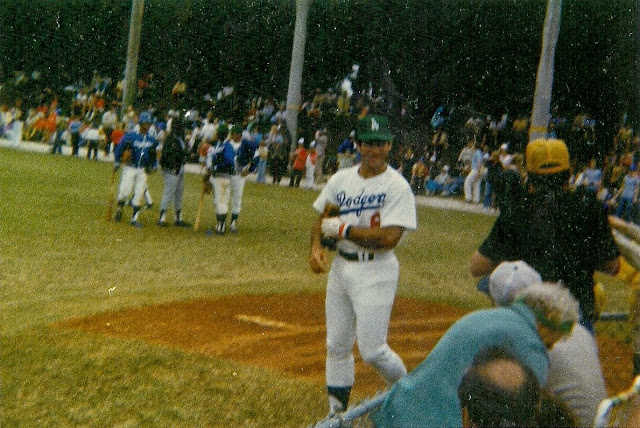 So as much as I like the blue of the set, I don't mind just a little bit of green.
These cards are just "off" enough to qualify squarely in the oddball category. They are not quite 2 1/2-by-3 1/2, same width but just a little short. And they are not on sturdy Topps stock, it's more like a note card.
It's a nice little set with interesting little bios on the back where you get to know things like "Bill's nickname is 'ropes'," "Doug's nickname is "Bayonne" (I never heard anyone call him that), and Yeager earned the nickname "Raw Meat" after a home plate collision with Paul Blair. Also Manny Mota's card says, "his bonus was a plane ticket away from the ghettos of Santo Domingo and $400." Well, isn't that nice.
Glad it's finally complete. Just wish I knew a little more about it. If anyone has any background, let me know.

Nachos Grande said…
That's a cool team set, can't say I've ever seen (or heard of it) before. TCDB has the checklist for the set but no other information so I can't be of much use to you in solving any lingering mysteries. Still, cool set (and love all the blue)!
January 20, 2022 at 11:07 PM

Fuji said…
Congratulations on completing the set... or buying the complete set. I did the same thing with my 1978 Kelloggs set build. I needed some cards, but I found a complete set that filled in the blanks and helped with some set upgrades.

Until the end of this post... I was thinking these were oversized (postcard size) cards. The other thing that surprised me is how many guys on the 1979 Dodgers I was able to recognize by their photo. 11 of 15. I doubt I could look at the current Dodgers roster and identify 11 guys.
January 21, 2022 at 12:08 AM

Nick said…
I'm with Fuji - for some reason I thought they'd be oversized from the scans. Never heard of/seen these, and the fact that little seems to be known about them makes them odder-than-odd oddballs. That Garvey is excellent. Didn't know the Dodgers started the St. Paddy's Day green-hat thing, either.

(Also if you happen to still need a home for any/all the doubles you got from this set, I would most certainly take 'em! Which also reminds me, got your package in the mail today - thanks so much!)
January 21, 2022 at 1:35 AM

bryan was here said…
Oh, these are neat! The oddball collector in me needs these. Knowing now they're close to standard size makes these a no-brainer.
January 21, 2022 at 5:19 PM