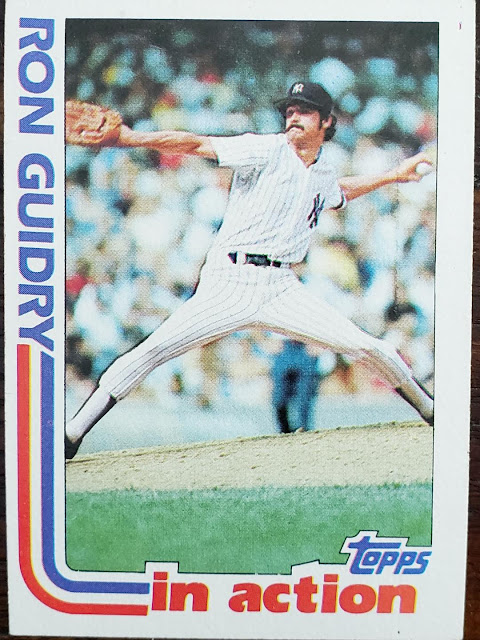 If 2022 Topps really wanted to draw my interest, it would recognize a significant anniversary in its history this year.
It's been 50 years since Topps installed an "In Action" subset into its flagship set for the first time, in 1972. And it's been 40 years since Topps repeated that tactic in its 1982 set. I was quite disappointed when I opened packs in 1992 and found no "In Action" subset.
Since that time, the only "In Action" references from Topps that I can think of are online one-off deals. Maybe it was an insert set recently? I don't know. If it isn't part of the base set, I lose track.
Perhaps it isn't necessary to have such a subset now since just about every base card is an action card. But I think there are creative ways to make an "In Action" set today by finding special action shots or using different cropping to make the cards distinctive.
But again, stuff like this is usually reserved for SPs and such. I'm wishing for something nobody is capable of producing today, which is why I am reliving the past again. Here are some of my favorite "In Action" cards from that 50th anniversary set: 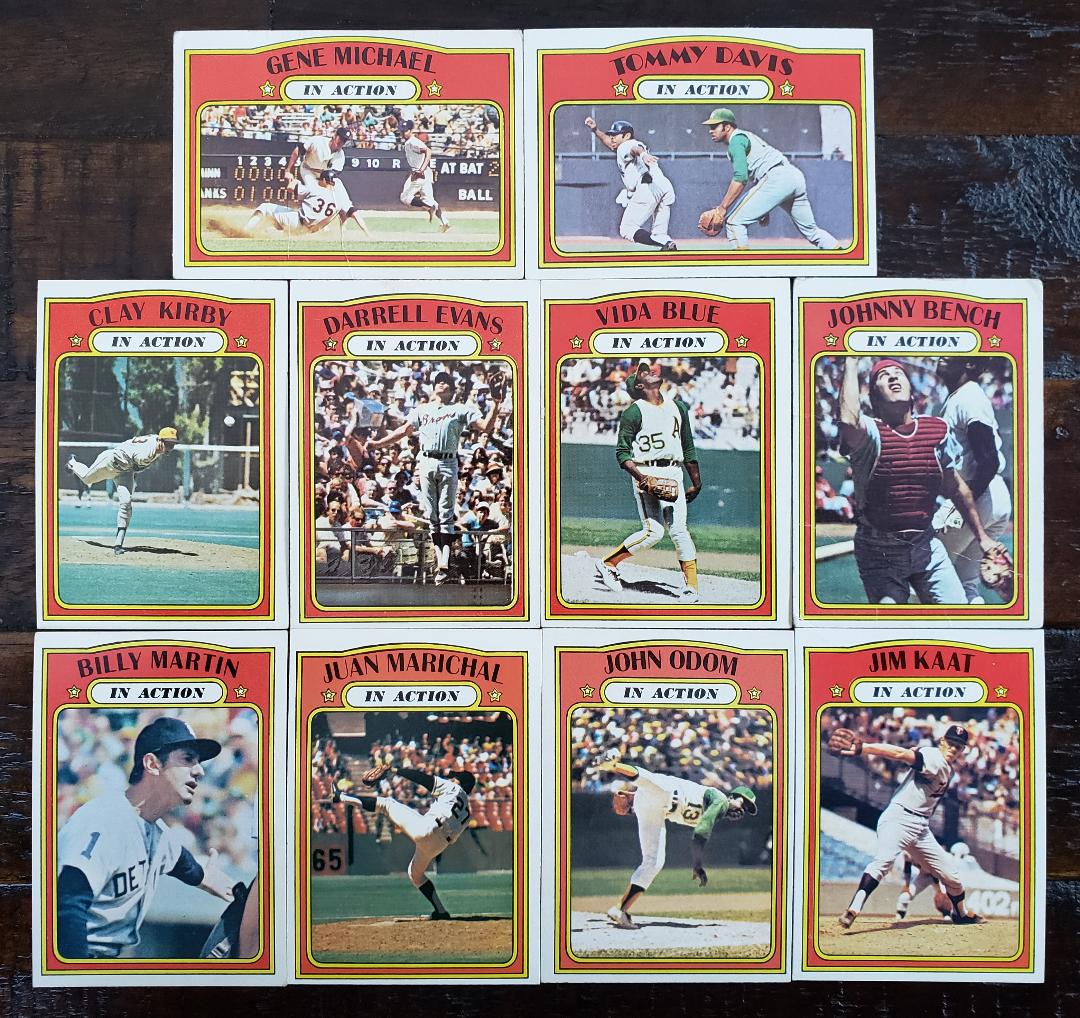 I have more favorites than that, of course -- there are 72 of them in the set! But I've written about several of them on the blog, and in a Beckett article, and in a blog post about the Beckett article. Sheesh! So these will do fine.
Topps was just warming up its action-picture muscles at this time, debuting action photos on individual players' cards only the previous year. That's why the '72 In Action cards have some wonderfully unusual action photos, some -- like the Darrell Evans -- that you've never seen again.
OK, here are some 1982 In Action favorites: 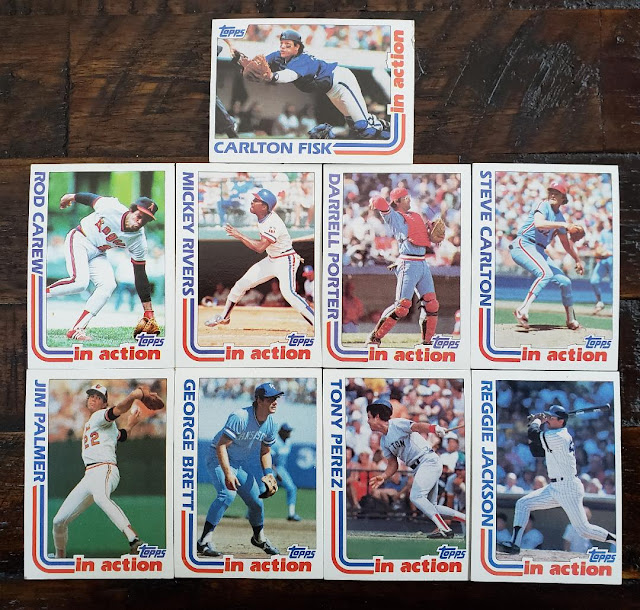 For the most part, the 1982 In Action photos are clearer and significantly closer than the '72 In Action cards. That also means there is more "sameness" with the photos than in the '72 set. And "sameness" with action pix has been a complaint of mine with sets since the early 1990s. It shows creativity of picture-taking and picture selection is just as important with action pix as it is with the older candids and posed shots.
Since Topps was using action more and more for its base cards it ran into issues like below and I guess hoped nobody noticed?: 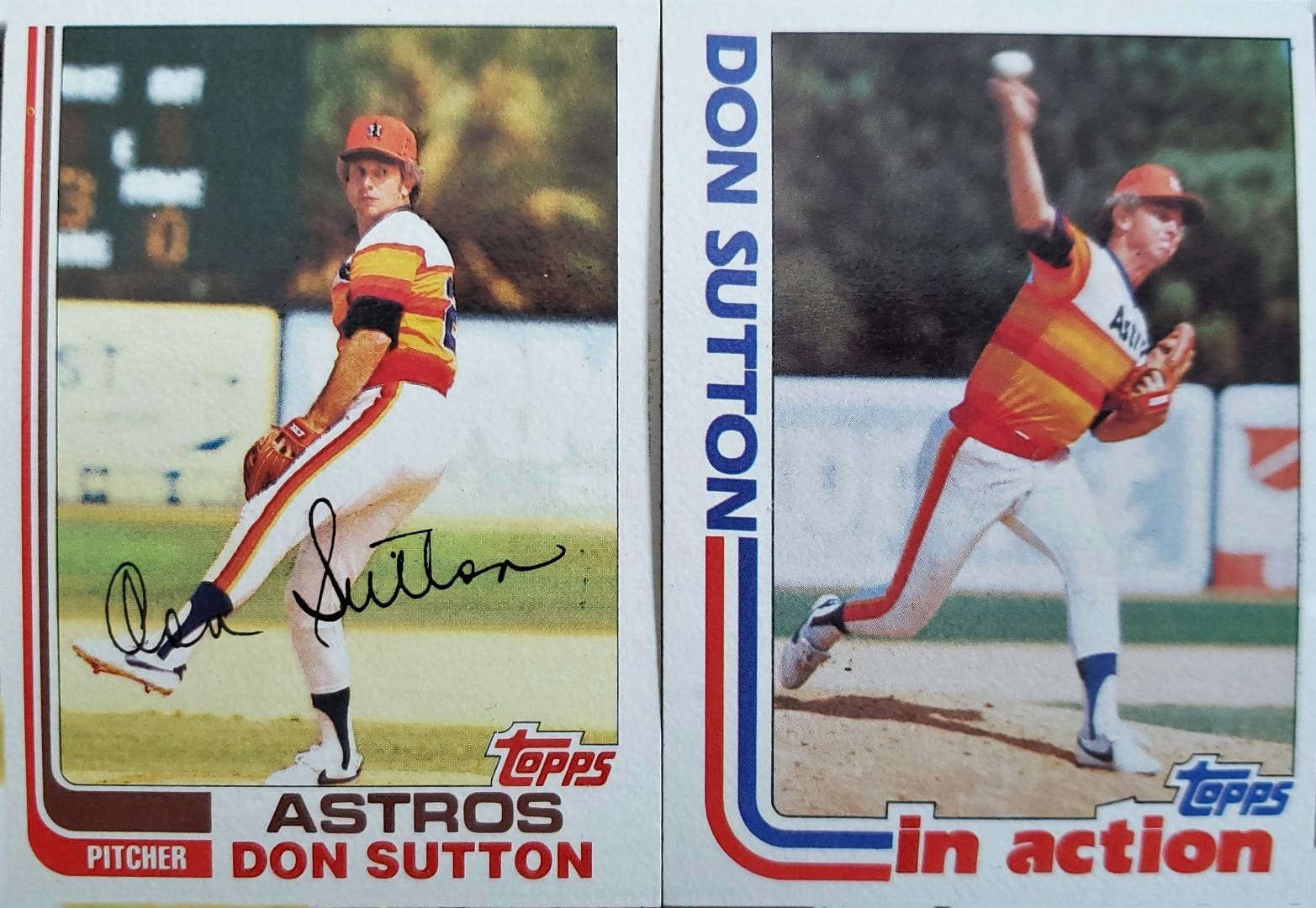 But the Tony Perez card is great and the Carlton Fisk goes without saying. I love the Reggie card because it rhymes. Reggie Jackson In Action!
And you know you all saw the Rod Carew shot in '82 Fleer, too. I've written about that before as well.
Here's something else I've probably mentioned: 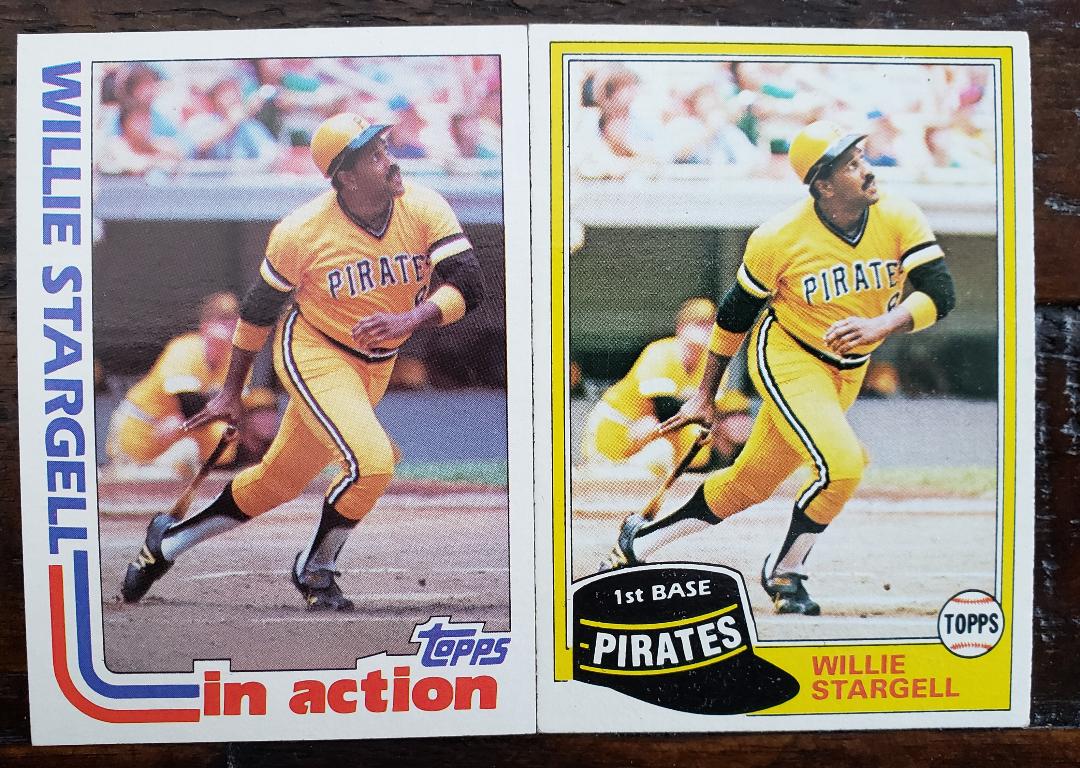 Topps re-used the 1981 Willie Stargell photo for its In Action card of Stargell in 1982. I didn't even notice that when I was accumulating cards in '82.
Stargell is one of the players who appeared in an In Action card in 1972 and 1982. 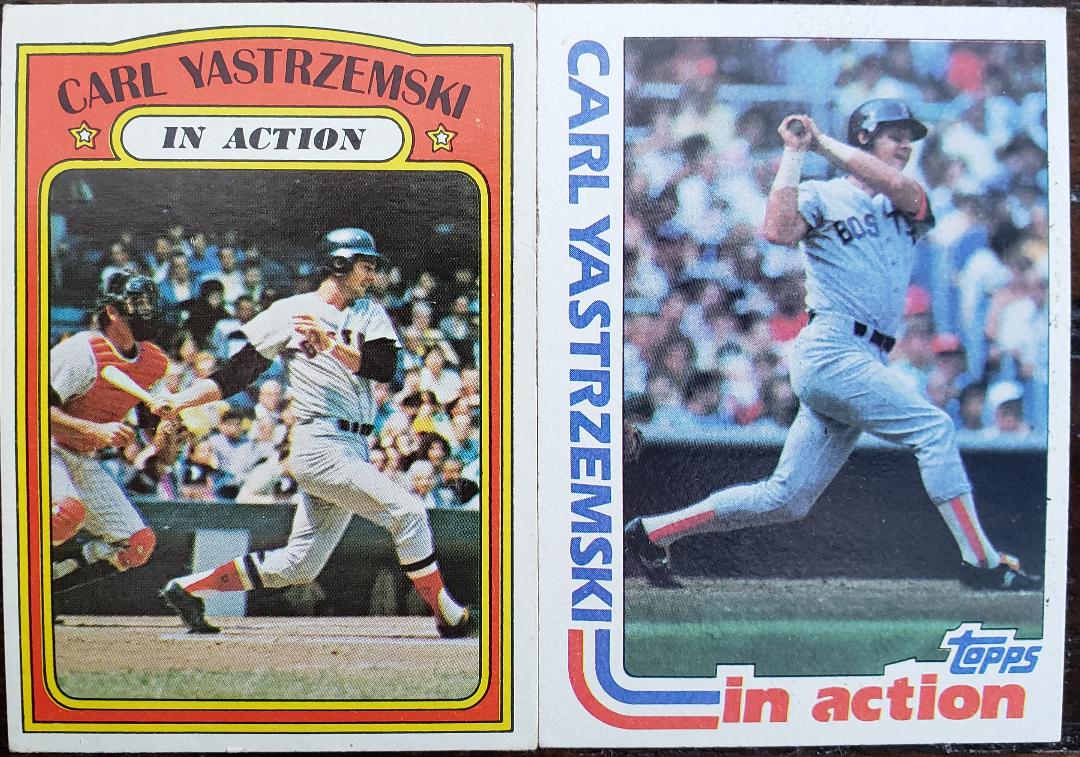 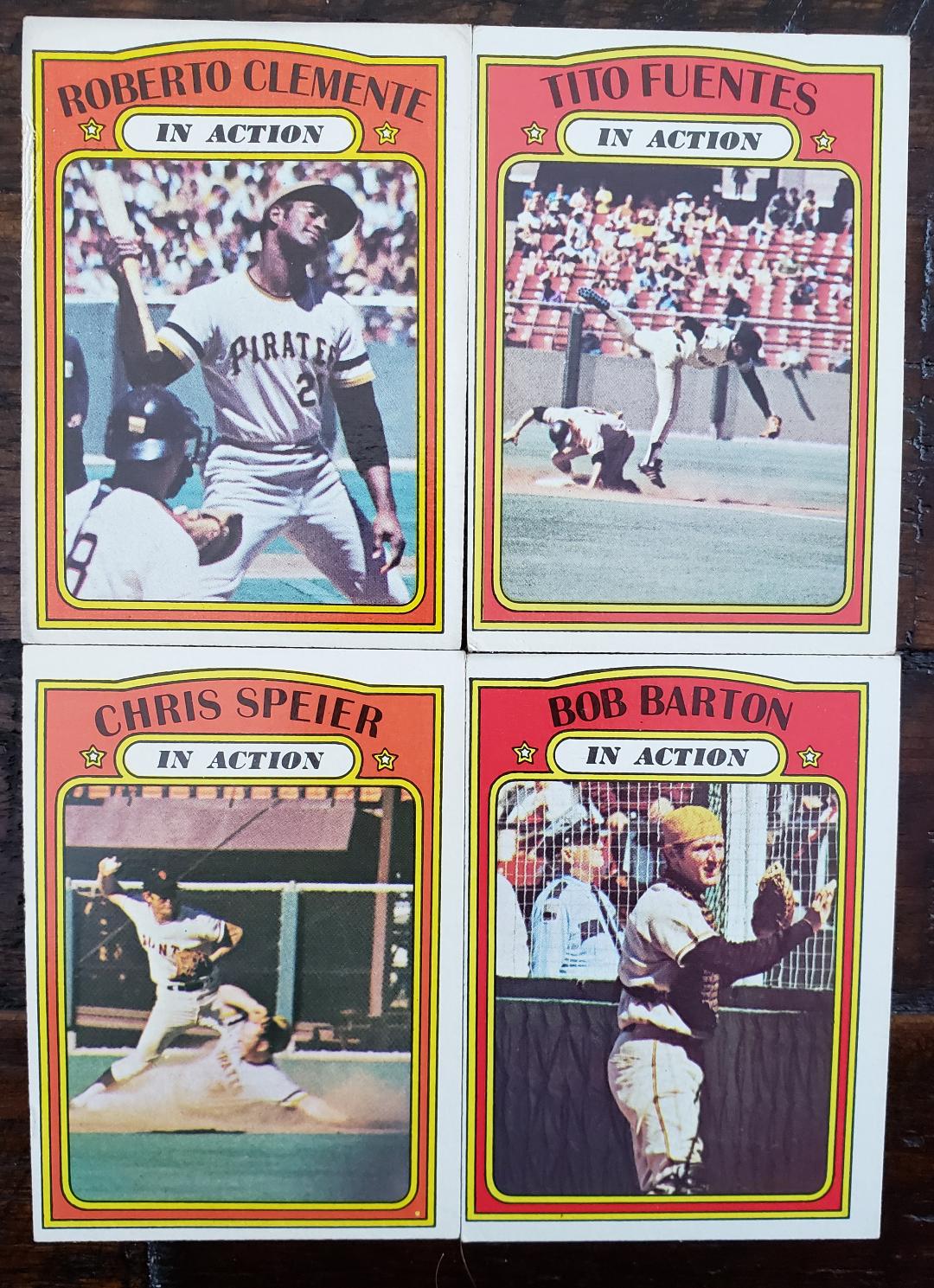 Here are a few more "In-Action" favorites from '72 before I hit the road. (Perhaps double quotes are needed for that Bill Barton "In-Action" "In-Action" card).
I think we're all a bit immune to action cards and have been for decades. Fifty years after the first In-Action subset would be a nice time to make action cards distinctive again.
Maybe Topps has something like that planned.
Or not.

Johnnys Trading Spot said…
You have great faith in a company that has so disappointed us too often for quite a while now. I can see the in action being used again in Heritage (2021), but flagship.....I don't know.
January 26, 2022 at 8:00 PM

bryan was here said…
I'm thinking because "action" photos were new to Topps in '72, having debuted the previous year, they wanted to make them special that year. Topps for the most part nailed it with their player and photo selection, especially the Billy Martin and Roberto Clemente. Going forward, they made action shots as part of the rotation, which took the shine off.

By '82 Topps was mixing action with standard poses more frequently, so the In Action subset, this time mostly superstars of the era being featured.

It would be great if Topps had a "in Action" series this year. At least they made them in last year's Heritage as part of the regular lineup.
January 26, 2022 at 8:12 PM

Brett Alan said…
I can't see the point of having an "In Action" subset when every card has an action picture. Maybe they should have a "Posing" subject instead.
January 26, 2022 at 9:04 PM

GCA said…
Every card is an action shot these days (including the flippin' league leaders etc.) and then they do a lot of portraits in Heritage and A&G, so maybe they ought to take a clue from Big League and do In The Dugout, or in the Clubhouse shots as a special card. Though I don't know that a lot of clubhouse activities are appropriate for cards or public consumption in general...

But I doubt they have any plans to go beyond action shots of players. Flagship is all about the big names (and recycled designs). Original thought isn't a priority.
January 26, 2022 at 9:41 PM

Nick Vossbrink said…
I did a long post about photography and baseball cards years ago where I hypothesized that most photographers didn't have the requisite gear to get super close ups in color the way they did even by 1982. Would be interesting to see a sports photographer go out with a 200mm lens now and take looser action photos the way they did in the 1970s.

If I were king of Topps, even with an all-action set like Flagship I'd see a place for "in action" cards as a place to put cards that aren't the best "baseball card" images. Maybe you can't see a guys face. Maybe it's not clear who the focus of the image is. After having done customs for a bunch of years here are loads of great photos that don't work for the standard baseball card but which would be great for an in-action subset.

night owl said…
Yes, Nick, thank you, that is my point. Even though almost every card is an action shot, you could still make an interesting "In Action" set using different styles of photos.

Fuji said…
I love action shots. Hmmm... maybe my fascination with these cards started with the 82T cards. But my favorite has to be that 72T Evans. What a great looking shot. Wonder what's going on in that photo. I also love the Billy Martin. The hobby needs more in-action manager cards.
January 26, 2022 at 11:41 PM

gregory said…
What about a subset where the players are just standing around, looking as boring as possible? They could call it "inaction". (I'll see myself out.)
January 27, 2022 at 6:44 AM

BaseSetCalling said…
Quite simply either Heritage or Topps Baseball could be livened up considerably by just scrambling the photo types, using them all at the same time on the same checklist. Action, portrait, candids. Mixing them altogether simply makes each type come off better than forcing a checklist into 99% the same type. Plus, in Heritage, it is now time for this to happen anyway. But would make Topps Baseball better also. Stadium Club does do that at least, but that was s a premium set that has to be deliberately tracked down rather than casually collected.
January 28, 2022 at 12:28 AM