A gimmick I can get behind 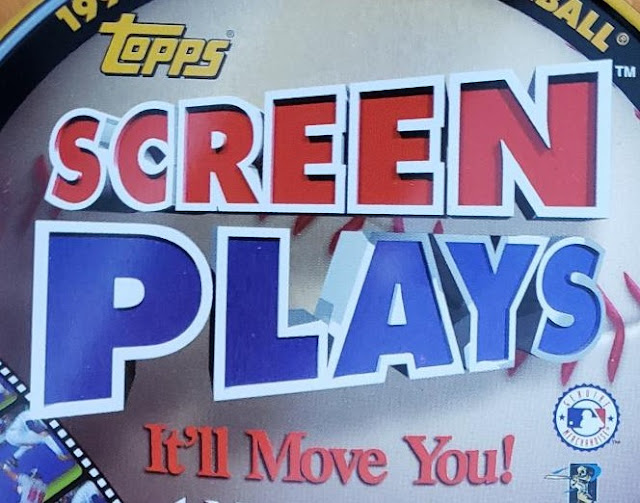 Twitter, just like the blogs and ebay, suckers me into buying a card when I'm least expecting it.
It doesn't happen often -- because, lordy, the weird stuff people are interested in on there -- but when it does, dammit, why do I have to press a key to get ebay to appear???
Such a thing happened when somebody, maybe Ryan Fagan of the Sporting News, was showing a card from 1997 Topps Screen Plays. I don't remember who the player was, probably because it wasn't a Dodger, but it looked magnificent.
I ran to ebay immediately and found a Hideo Nomo Screen Plays card for like 10 bucks less than anyone else was selling it for and sat in a chair and waited for it to arrive so I could play with it.
That is the thing with card gadgets like these. You're required to play with it.
I don't really mind that most of the time -- 1970s Kellogg's cards were the precursor to these Screen Plays cards and you know I love those Kellogg's cards. But sometimes I'm sick of all the tilting that's required of '90s cards. Tilt it to see the image, tilt it to see the shine, tilt to read the name. Why must I do work?? The card is suppose to work for ME.
As I've said many times, my favorite cards are 95 percent of the cards: a photograph with words and stats. That's all I need.
However ...
I have been known to wander out of my comfort zone. If it's worth the effort, yeah, I'll play with that gimmick.
I've been aware of the Screen Plays cards for quite awhile but never gave them much thought. Twitter put the bug in my ear and now that I have one, here's the agonizingly unnecessary breakdown: 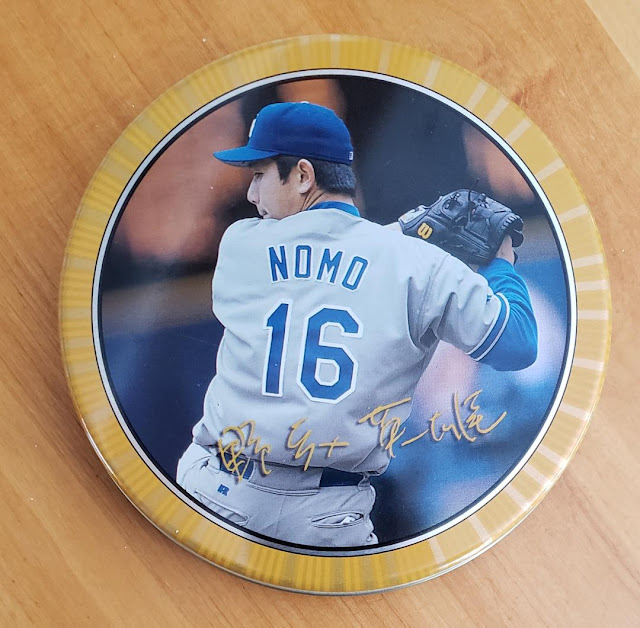 That's the front. It comes in a tin, because of course it does. The tin industry enjoyed a boom in the 1990s like it hadn't seen since Sir Can Canner invented cans. I'm guessing Nomo is the only player in this set with Japanese writing on the front. 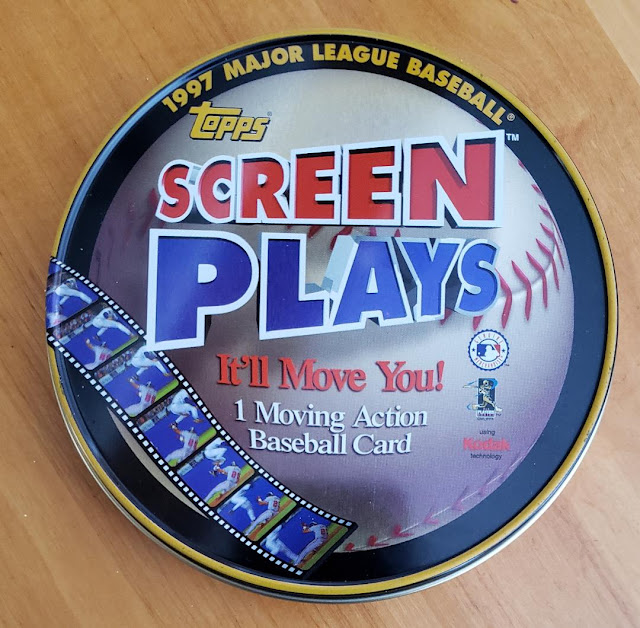 That is the bottom of the tin with the colorful words and the promise of movement. 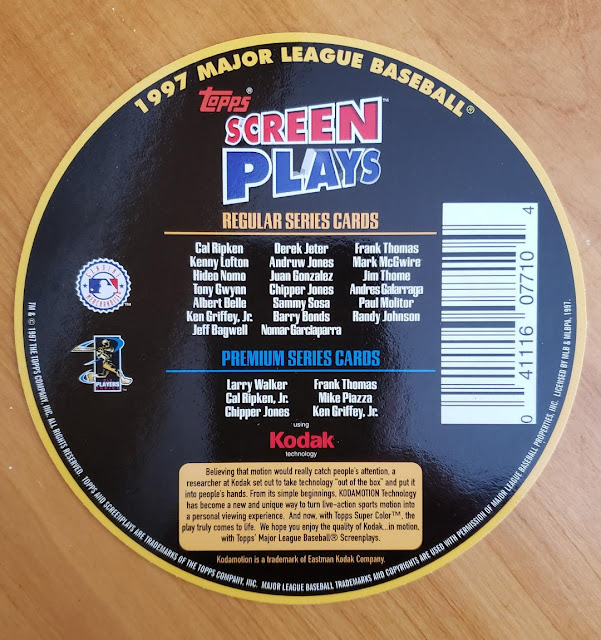 Open the tin and you get a checklist of both the regular checklist and some "premium series" extras which I shall ignore. There is also an advertisement for Kodak, I guess the brains behind the operation. 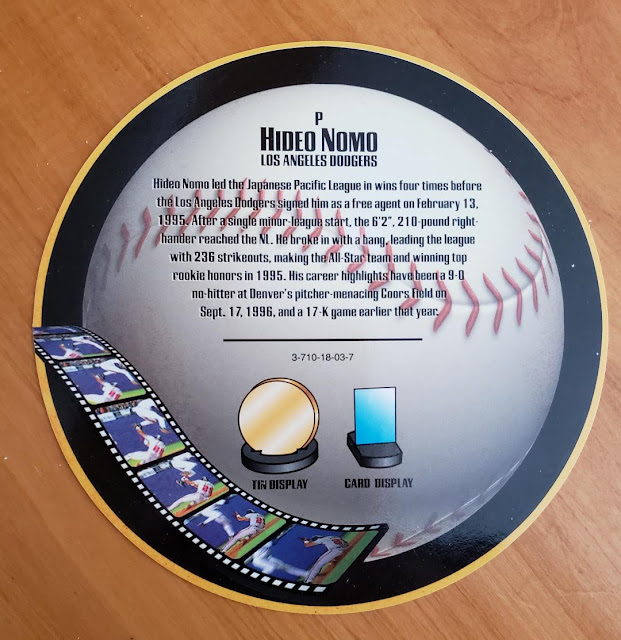 This is the other side of the checklist panel, a biography of the player featured and some demonstrations on how to display your card. Because gadget cards come with instructions. 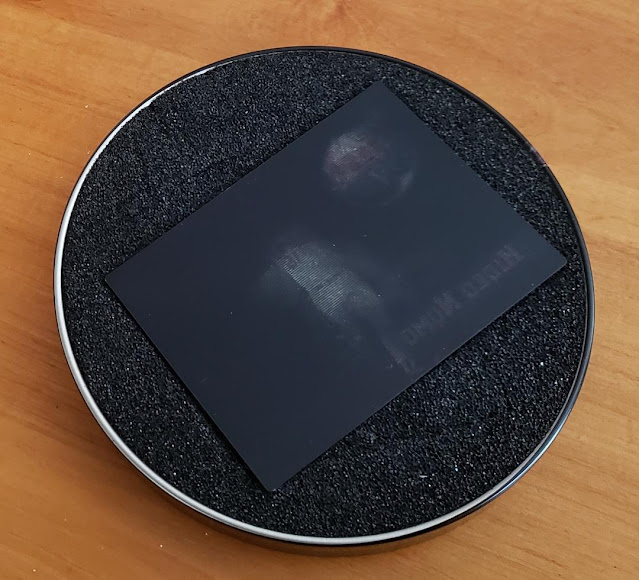 Oooh! Aaaah! The card! It rests on a foam pillow waiting for you to do its bidding. 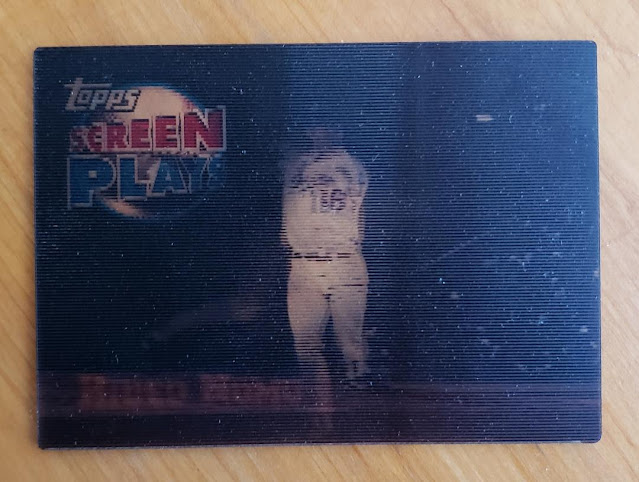 And there it is, the actual card, with actual card dimensions. That's the best image you're going to get looking at the card straight on, which is my complaint with similar cards, such as Sportflics. But if I must play ... 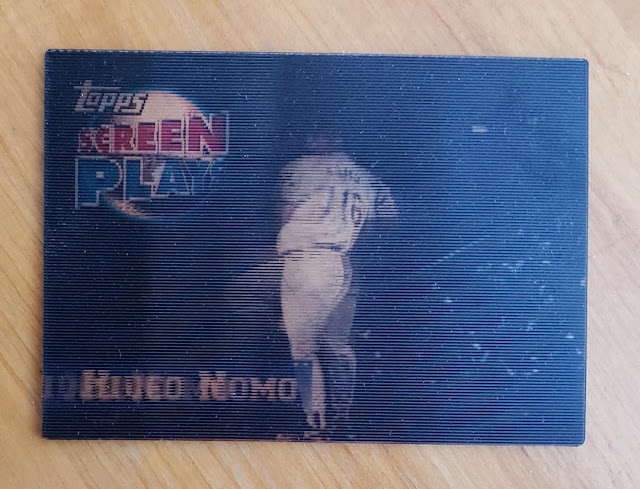 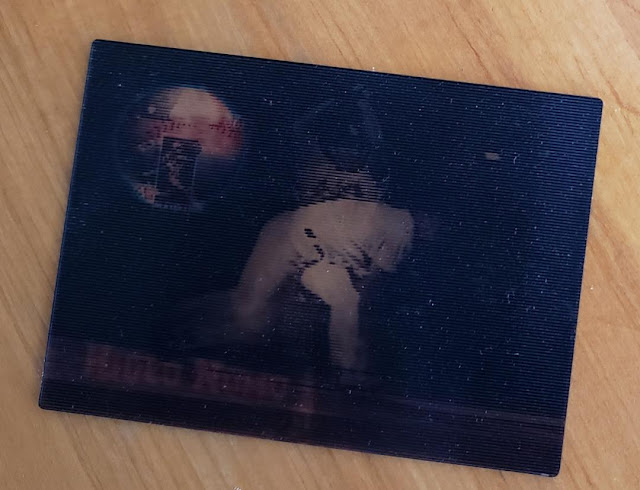 ... and there's another one.
You kind of need video to get the whole effect.

GTT said…
Huh- I'd never heard of that set before. Interesting.

bryan was here said…
That whole "motion card" seemed to be all the rage around '97. Upper Deck and Pinnacle had cards you could tilt to see "magic motion". So, all four sports got in on the fun that year.

Bo said…
I have a McGwire won of these, I think I won it in a blog contest years ago. Not really much of an improvement over Sportflics, so not surprising it was one-and-done.
January 23, 2022 at 10:06 PM

Billy Kingsley said…
Weird how that technology was used for that one year basically and then never again. Press Pass's ActionVision set for NASCAR uses the same technology and also came in single card packs.
January 24, 2022 at 3:36 AM

AdamE said…
I have a couple of these from when I collected Marino. The football ones however didn't come in tins, they are in plastic cases just like a CD only smaller. (at least my memory tells me it was smaller, it has been a loooooong time since I got out my Marino box) Until your post I has assumed that the baseball ones came the same way.
January 24, 2022 at 2:39 PM

Nick Vossbrink said…
It was Jason Schwartz (HeavyJ) on Twitter. I grabbed a Nomo for my collection as well.
January 24, 2022 at 7:07 PM

Nick said…
Gimmicks aren't always bad things - and while I've known about them for a while I've never actually tracked down one of this Screen Plays cards. Gonna have to change that soon, I think!
January 24, 2022 at 8:01 PM

Jon said…
I don't know what it's like now, but a few years ago one could still find these in the cheap boxes at shows (minus the tin, of course). I can't even remember who I got, as I sent it to somebody shortly after, but I finally grabbed one from a dime box awhile back. It was mildly interesting, but not something that I needed to keep.
January 25, 2022 at 12:34 PM

Fuji said…
Just another reason I loved collecting in the 90's. These are the kind of gimmicks that hold my attention for decades. Honestly... the only downside to this product are storing/displaying those tins if you lack storage space (like me).
January 25, 2022 at 10:14 PM

Adam Kaningher said…
These are pretty cool. I picked up Tony Gwynn's card a couple years ago at an LCS and I regret not getting more of what they had available.
January 29, 2022 at 7:00 PM