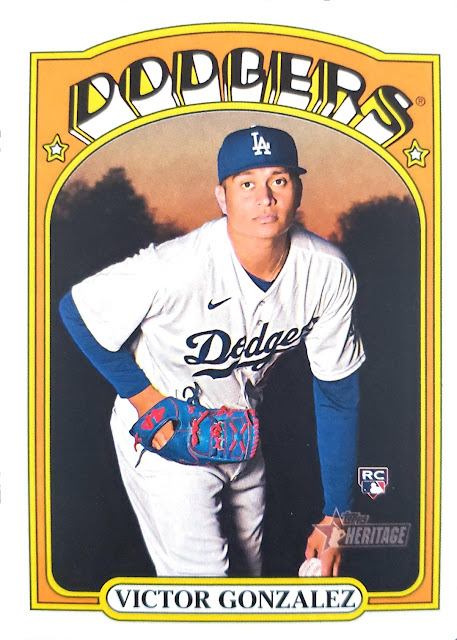 Waiting is even more of a part of life than it used to be, which doesn't seem possible considering how much waiting I did pre-pandemic, but yet there is sooo much moooore waiting.
A lot of it I can understand, even if it doesn't make me happy and I'm plain disgusted about it some of the time.
Then there is just the dumb kind of waiting. For example, this: 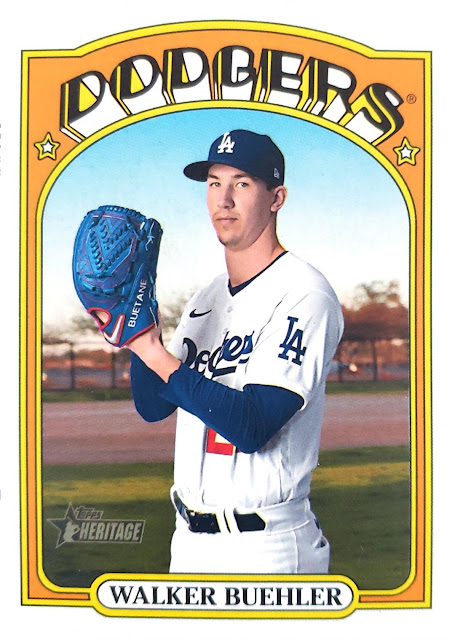 I waited almost an entire year to get this card, but it's not because there were no Heritage cards on store shelves or I was pulling nothing but Marlins and Twins.
Walker Buehler should have been in the regular Heritage set, issued last March. He's a regular part of the rotation, was a regular part of the rotation in 2020. There's no reason to skip him. Yet Topps put Buehler in Heritage High Numbers, like it did for several notable players who did not change teams and should've been in the main portion of the set (Buster Posey, Manny Machado, Stephen Strasburg, Rafael Devers).
I've read that Topps did this to make the Heritage High Numbers brand more enticing. So this was a marketing scheme, which is another example of modern tinkering with the hobby. Topps has already messed with the integrity of the Heritage brand in many ways so it's no longer a faithful tribute to the old flagship sets. This is just the latest example.
I was ready to order up the Heritage High Numbers Dodgers team set and get the whole thing over with when an envelope from Cardboard Catastrophes arrived that included a good portion of that set. So I  canceled the order out of my cart, but now there is the matter of me having only half of the set. 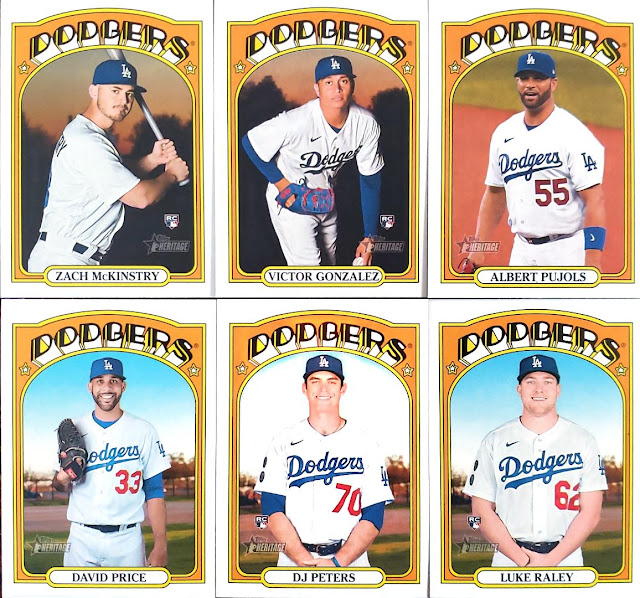 Here are the other cards that Jeff sent. There are a striking number of cards in HHN in which the players' photos are taken in the exact same position as Peters and Raley. Very exciting, Topps. I know that didn't happen in the early '70s. Get them to pretend to throw the ball or anything at all rather than just stand there. 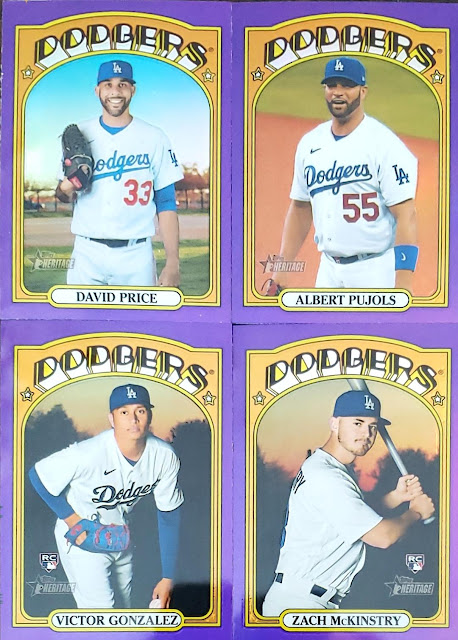 (Hello phone in the picture!) Something the team set I was going to order off ebay didn't have, hot box purple parallels! Heritage is still doing this and I still like it. 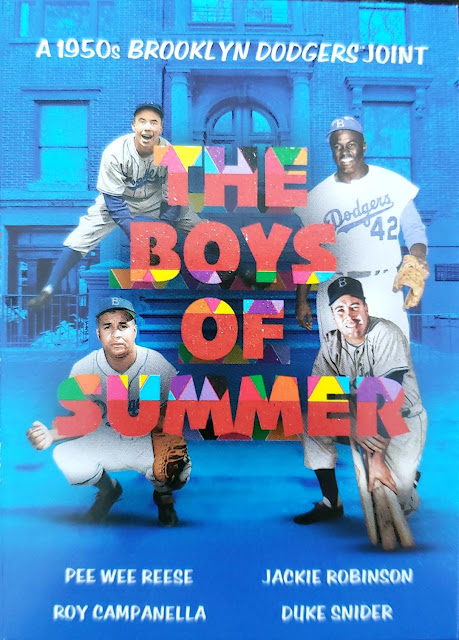 Moving on to a different 2021 set, one of the inserts from Archives. Everybody likes these movie "poster" cards. I do, too. I try to ignore that these are well-used photos of those four legends and that none of it is real. Like movies, you need to suspend your disbelief. 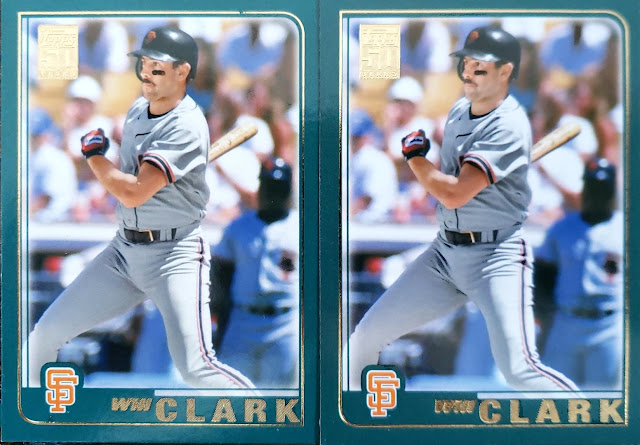 Jeff likes to be cute and send me cards of players I'm known to dislike. It's not difficult with Topps forcing Will Clark into every set. (Why not try a card of Terry Kennedy once in awhile?) So then I have to find someone willing to take them. And if I don't ... to the shredder!!! 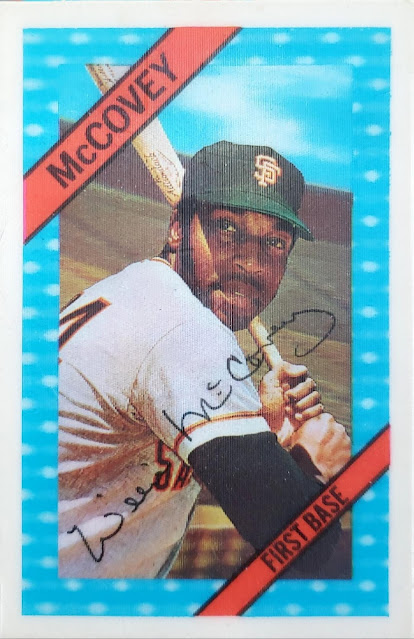 The stuff I really like -- '70s stuff -- also appeared in the envelope. I will take envelopes containing '70s Kellogg's cards always, especially ship-shape ones like this '72 McCovey. (Kinda makes up for those Clarks).
Jeff also sent a Mel Stottlemyre from this set but my phone scanning app rejected it despite a few tries. The card has a corner issue -- is the app now grading cards? 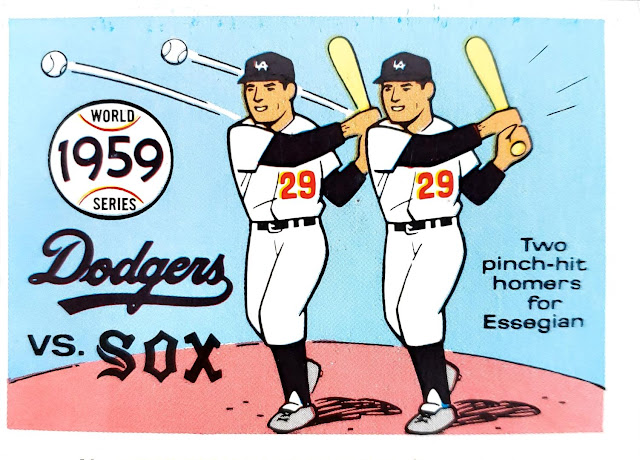 And one more 1970 Laughlin World Series card for my collection. Yay! This is already in the Dodgers binder, but I need that one for the set, too!
So, that's it for today, except for the matter of getting the other four Heritage High Number Dodgers that I need, including Gonsolin and Lux who probably both should have been in the set issued last spring.
I'd like to think that tinkering like this will end with the Fanatics take over, but probably not.

night owl said…
Could be. I've suspected some Heritage backgrounds are not real for the last 5 years or so but the lighting on Gonzalez makes me think it was actually taken early/late in the day.
January 16, 2022 at 9:50 PM

Jupiterhill said…
For a moment I thought the Pujols card had a floating armband. It took me a couple seconds to see it was on his arm that blended into the background.
January 16, 2022 at 10:22 PM

bryan was here said…
I thought the Movie Posters were pretty neat. I picked up the Black Aces one featuring Bob Gibson, Fergie Jenkins, Doc Gooden, Vida Blue and CC Sabathia.
January 17, 2022 at 12:52 AM

bbcardz said…
Love those hot box purple chrome cards. I was lucky enough to get one of those hot boxes last year (first time ever!). So now I'm trying to see if I can get all 100 from regular Heritage and the other 100 from Heritage HN. So far I have 66 of the 200. Those Kelloggs cards are great too but I wish most of them didn't crack/curl so much. They would really look great in a binder.
January 17, 2022 at 1:32 AM

Nick said…
Really have no clue how Topps curates the High Number set these days. There's no reason guys like Buehler should be held back for the HN checklist.
January 17, 2022 at 1:48 AM

Fuji said…
Fans shouldn't have to wait for stars like Buehler to be included in a product like Heritage. I get Topps holding back some stars for their Series 2 flagship, but (imho) Heritage should just be one series with 787 cards.
January 17, 2022 at 8:32 AM

Nick Vossbrink said…
Having some stars in High Numbers makes sense to me but for the 72s they really should've banked on he Traded design here and tried to get as many of those guys in.

John Collins said…
Ah yes, hobby tinkering. I suppose a big example of this is just around the corner, when Topps will issue the Wander Franco RC with '22 Series 1, instead of including it in the Update series like they should have last year. It will be interesting to watch the run up on that card - I will likely not participate in trying to corral one myself.
January 17, 2022 at 3:00 PM

night owl said…
Yeah, I get it, too, it's just Heritage had ignored this until this year. And then this year, the High Numbers set gets issued way after it usually is, so the effect is pretty much lost.
January 17, 2022 at 4:05 PM