That other brown team 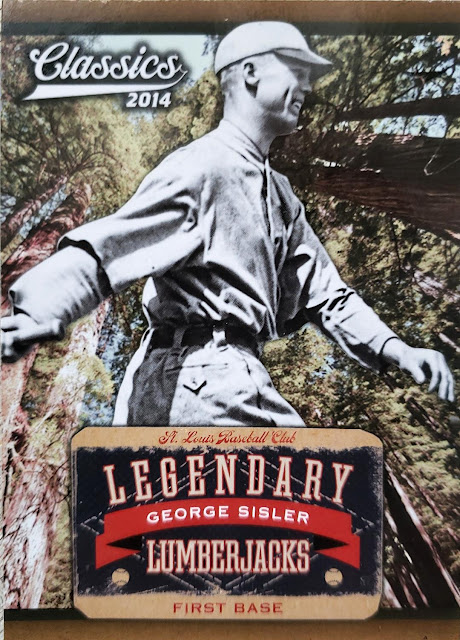 I am one of those old baseball fan dudes who appreciates defunct teams.
I don't go full crotchety and wear only Kansas City A's jerseys combined with Pilots caps when I go to the ballgame. And I'm not knowledgeable enough to tell you all the Federal League teams and where you can find merchandise for those long-ago squads. But I will like a thoughtful Expos reference or picture and secretly appreciate a fan spotted wearing a Cleveland Naps hat.
I am not prone to collect cards of those teams, although I do find myself unwilling to let go of any retro Expos.
But not long ago Cards On Cards was giving away surplus cards by team and offered up each team on a first-come, first-serve basis.
The Cards On Cards proprietor and I have traded A LOT over the years. Cardinals for Dodgers at least 60, 70 times or more. I'm almost certain that except for a few Cardinals tied up in sets, he has all the Cardinals in my collection. And I assume the same situation exists with his Dodgers.
So, I figured asking for him to send his surplus Dodgers would be redundant. Surely I've weaseled all of them away from him by now. That didn't stop me from asking for the Dodgers, but I also wanted to as for another team just to be safe. And, when I saw there were a handful of defunct teams available, I asked for one.
What the heck. Everyone ignores the St. Louis Browns.
Out of all the defunct teams, it doesn't get a whole lot of love, not anything close to the Pilots or Expos. But the Browns had a lengthy (and not very successful) history. With a couple of legendary players. And, best of all, their team name was their team color! That's cool!
I happen to rag on the only current team to wear brown these days. It's really not the best color choice. But at least the Browns owned it. It's right there in their name! And they wore a bunch of brown, too. No orange helmets for this Browns franchise.
Also, this is an excellent opportunity to add a few Satchel Paige cards to my collection. 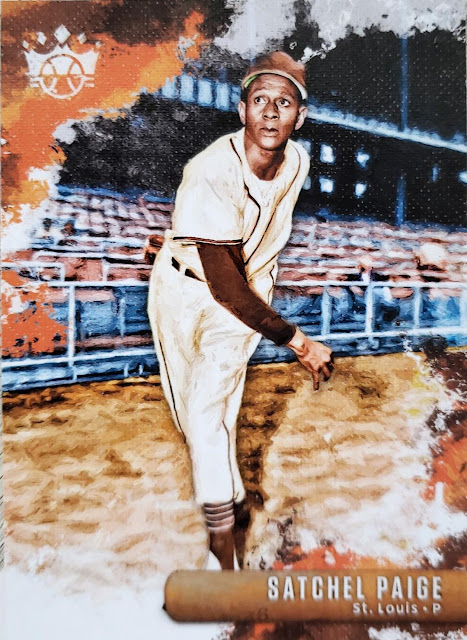 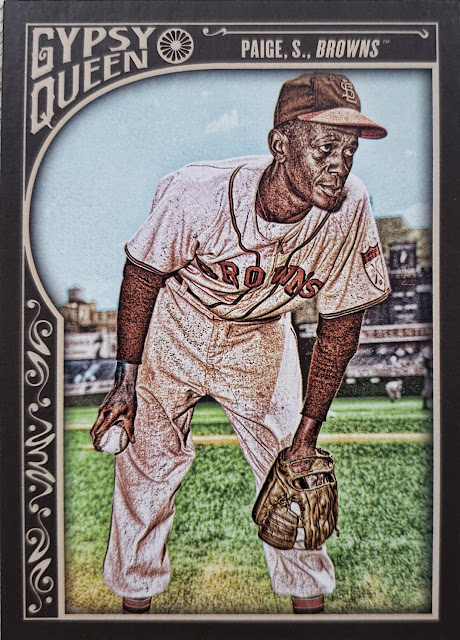 That second one with the GQ design is a beauty. It matches so well and it's one of the lesser offensive GQ designs.
Most of the other Browns cards were from the '91 Archives 1953 set. 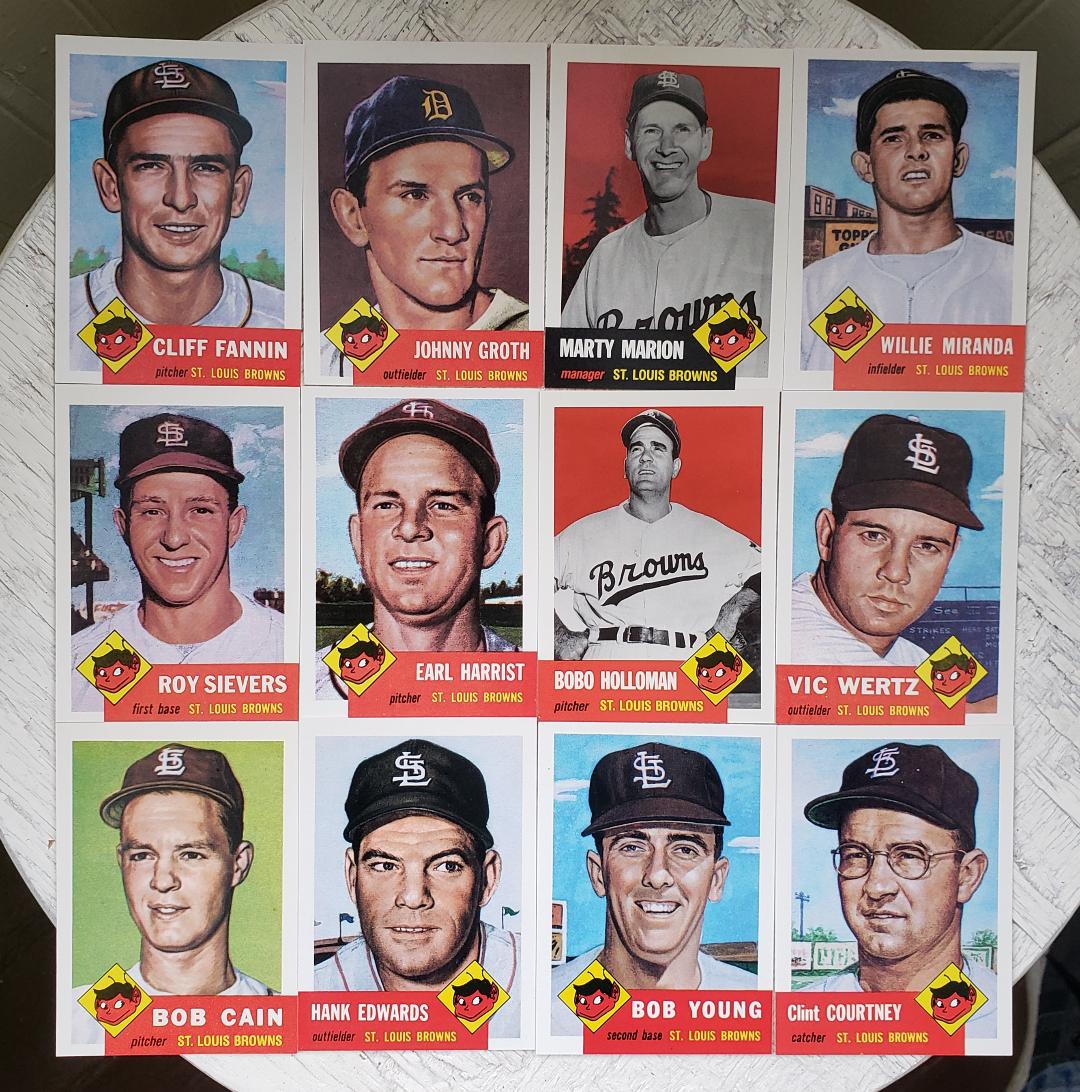 Love seeing that Brown hat with the interlocking S and L. It looks so much better with just a tinge of orange rather than some other color like say ... yellow, ick. 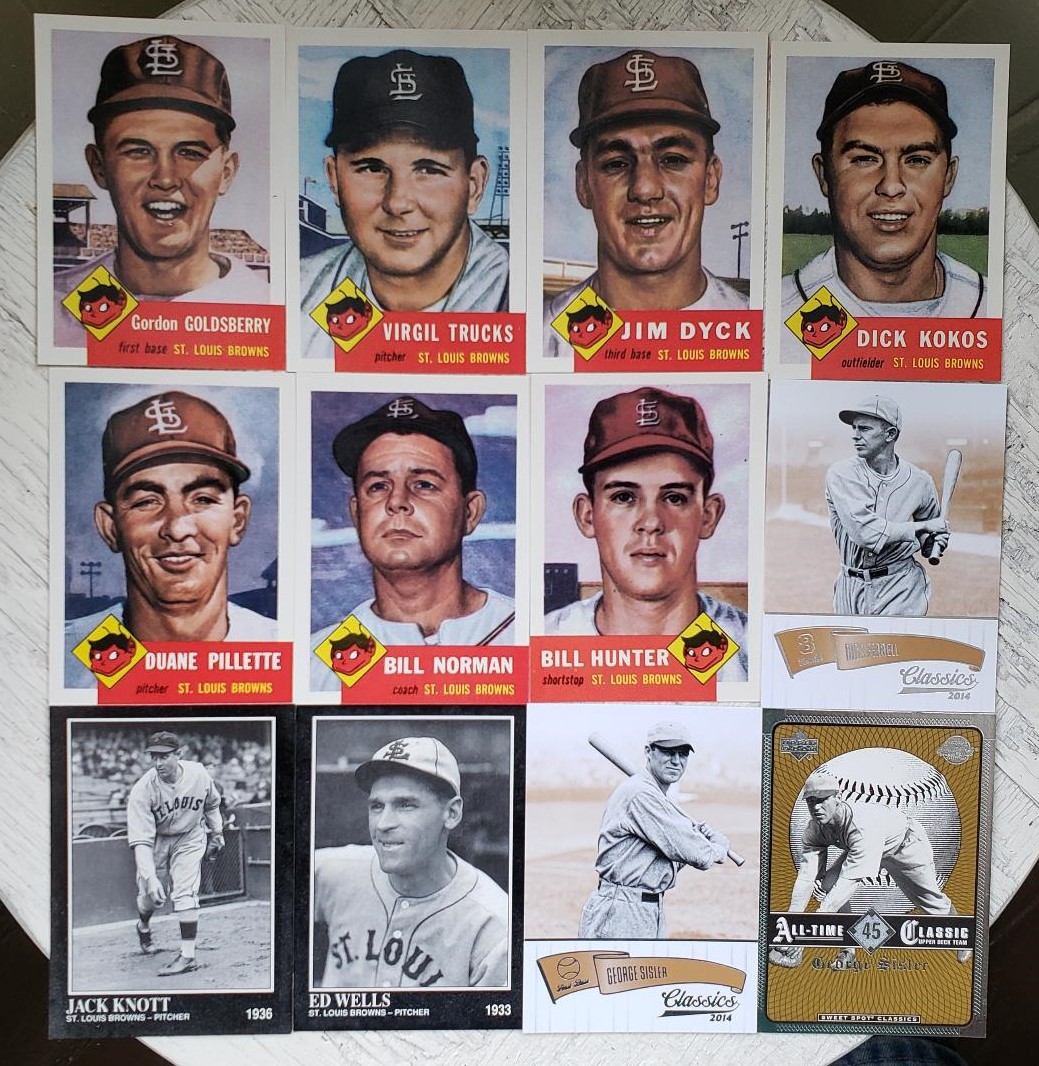 This batch of cards bumped up my measly number of George Sisler cards, as well as Bobo Holloman cards. 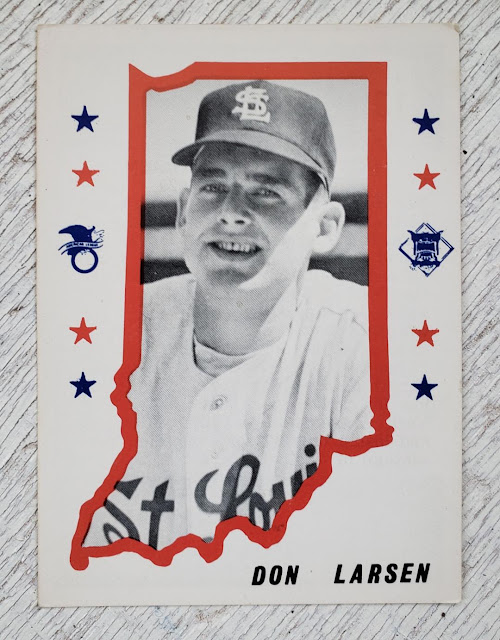 And what about a Don Larsen Browns card? Much better than a Don Larsen Yankees card. Larsen spent his first year in the majors (1953) with the Browns. This is the only Larsen Browns card I know of.
So I feel like I accomplished something by probably tripling my number of Browns cards and getting them to a respectable number, especially since I have so many more cards of teams I care much less about, including that current brown team.
But Kerry was up to the challenge of finding some Dodgers that I needed, too. 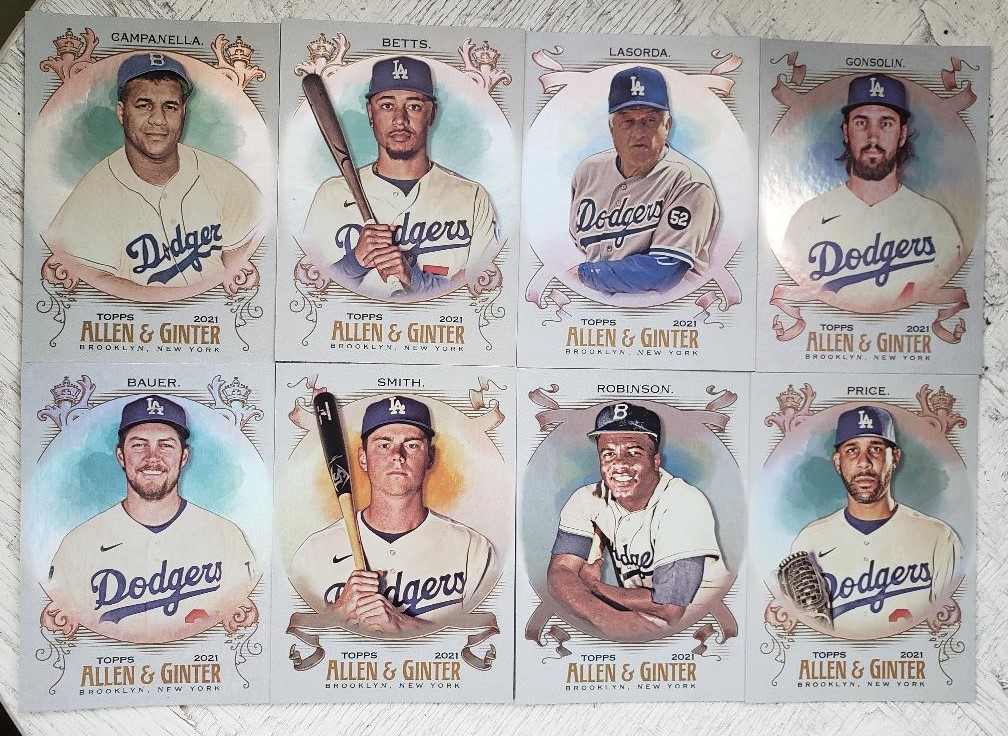 These are all "hot box" 2021 Allen & Ginter shiny parallels. This is the route you need to go if you're going to find Dodgers I don't have.
However, I much prefer the old A&G "hot boxes" that didn't annoy set-collectors. If you're trying to collect A&G and you stumble across a hot box of parallels, that's basically 20 bucks wasted. When I landed an A&G "hot box" several years ago, it was much more productive for set collecting because it was filled with short-prints. That's the way to do it.

I think this completes my 2021 Diamond King Dodgers base needs. I'm a bit hazy on that. I think some of them are caught up in Nachos Grande's Group Break 3 limbo. 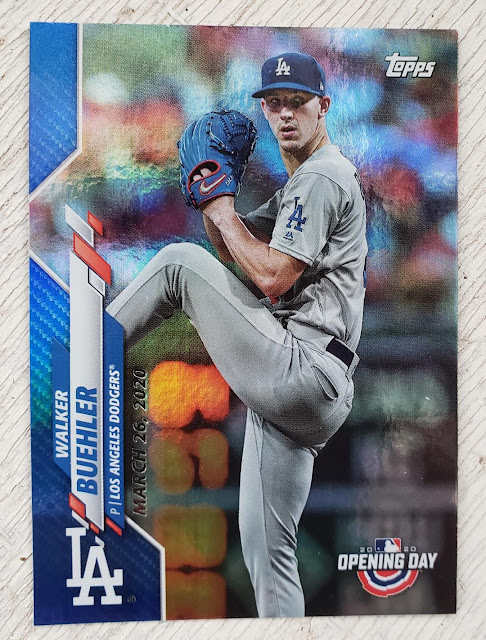 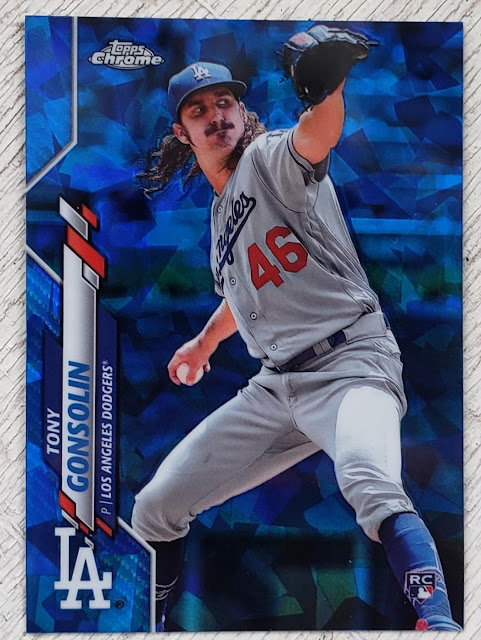 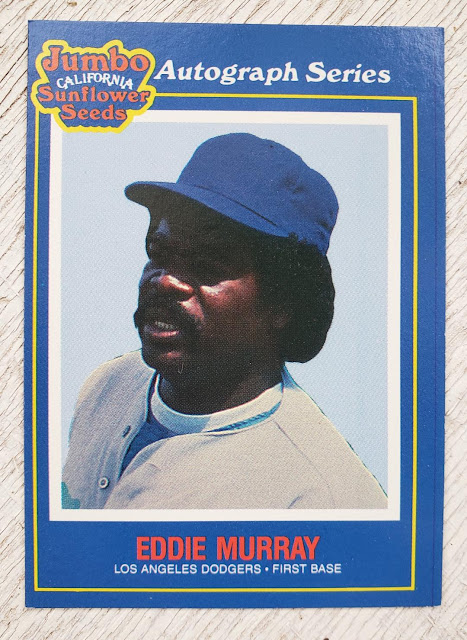 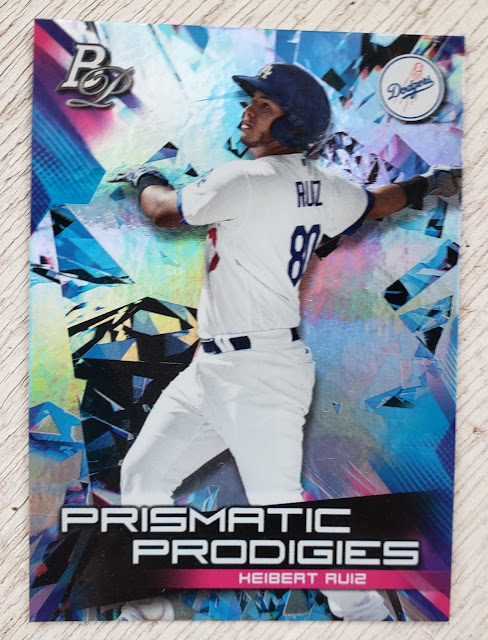 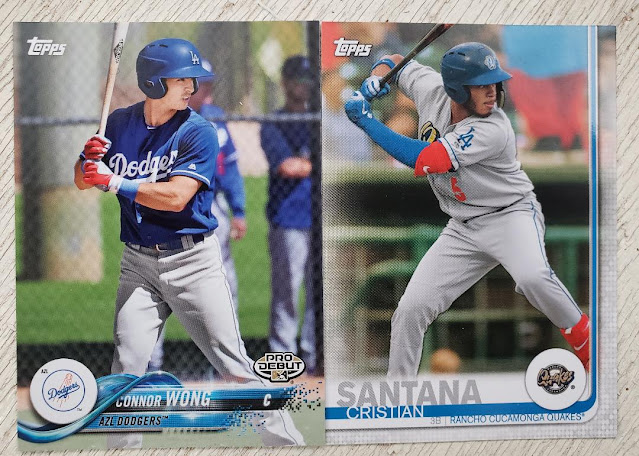 How about the contrast between those modern-day blue shinies and Eddie Murray's shadowed face on a card about seeds? I have room enough in my heart for both. 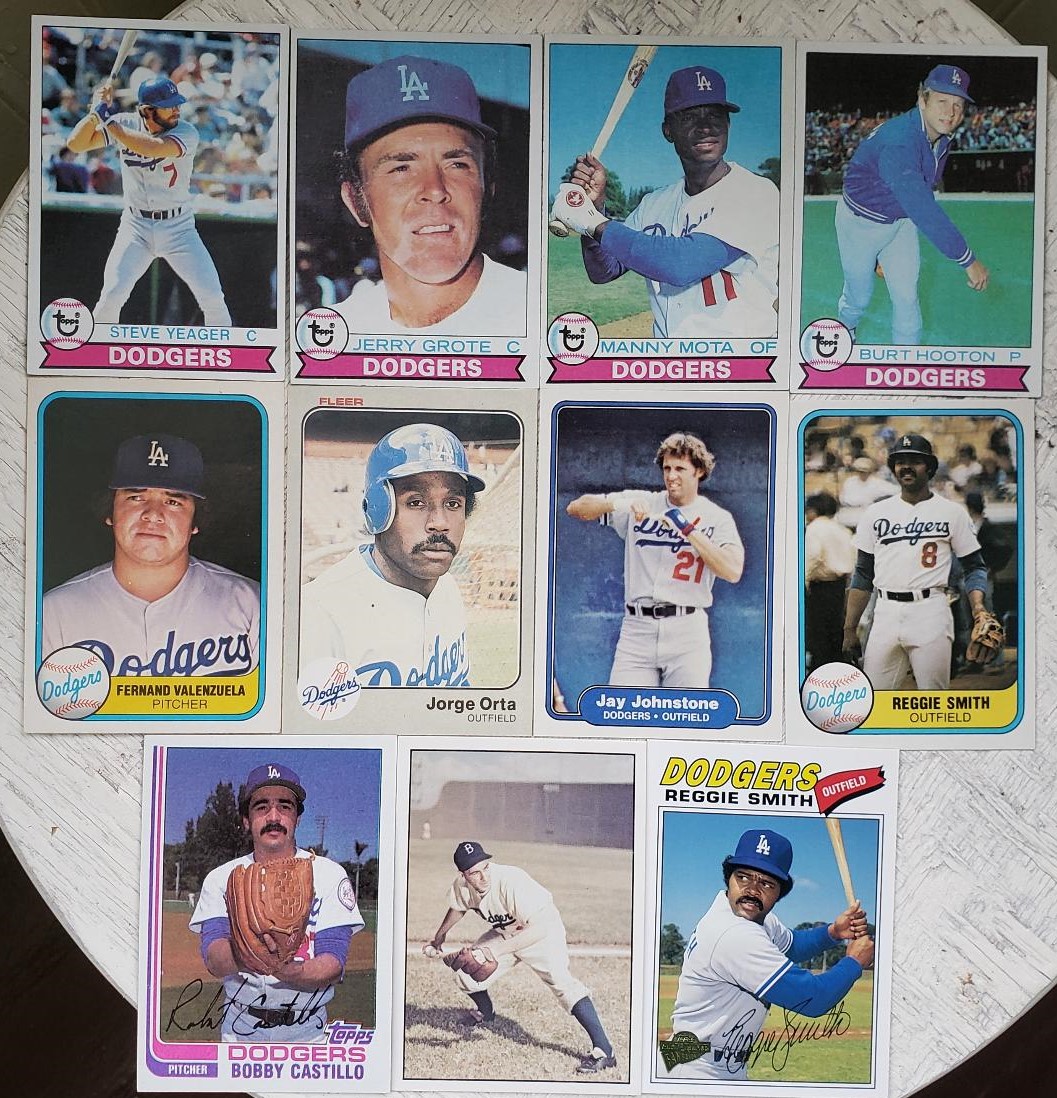 There was a bunch of latter-day vintage Dodgers in the box, too, or at least a tribute to late '70s vintage with the Reggie Smith. Even though I have all these cards, I always like getting them, to relive old days, of course (these mark ages 14-17 for me), but also to see if I can upgrade the cards are manhandled back then (esp. the '79s).
That was a lot of good stuff and all I was doing was relieving a fellow collector of some unneeded cards.
Oh, and just because I really wanted to make sure I got cards I could use, I picked up a few of these. 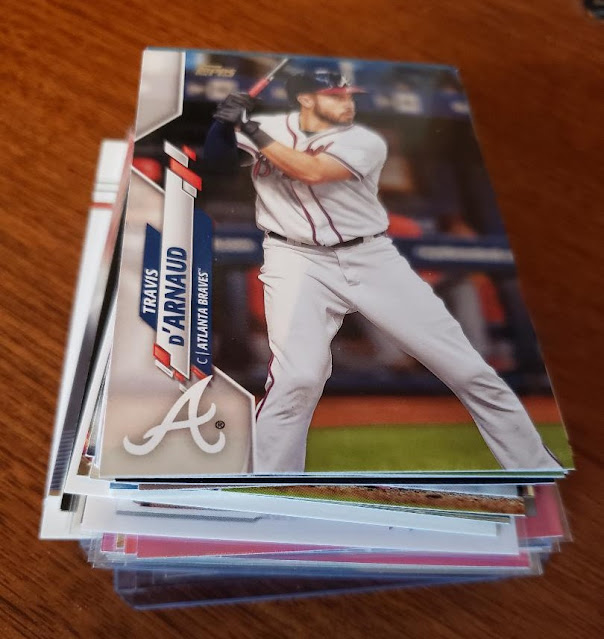 Fuji said…
Outside of the Montreal Expos... I don't know a lot about defunct baseball teams, but I do enjoy seeing them featured on cards. And I've been eyeing a KC Monarchs Jackie Robinson jersey for awhile now.
September 15, 2021 at 11:46 PM

Nick said…
Defunct teams rule! I have a whole separate binder for 'em in my collection. Don't see enough Browns cards these days, and that Larsen is absolutely excellent!
September 16, 2021 at 12:38 AM

GCA said…
I wish the Cleveland Spiders lasted long enough to get more modern cards.
Love the defunct leagues and teams in football even more. USFL, AAF, American CFL teams, and on and on. I got four different team t-shirts right as the AAF went down. Still wear them to card shows. Would love USFL shirts.
September 16, 2021 at 4:04 PM

bbcardz said…
According to www.dictionary.com, the definition of 'defunct':

The St. Louis Browns franchise is not defunct but merely relocated and renamed (and still functioning) as the Baltimore Orioles in 1953. This franchise actually originated as the Milwaukee Brewers and moved to St. Louis after the 1901 season.
September 16, 2021 at 8:32 PM

I almost bought a St. Louis Browns hat the last time I was in Cooperstown, but I didn't want to have to explain it to too many people that I know. Too many of them wouldn't have a clue.
September 16, 2021 at 11:44 PM

Jon said…
I'm not sure why, but since returning to collecting I've had a bit of a soft spot for the Browns. I don't go out of my way to collect the newer stuff, but do hold onto all of the vintage cards that cross my path. I keep thinking I'll put them in a binder one of these days, but still haven't gotten around to it.
September 17, 2021 at 8:49 AM