The last time digging through the cereal box 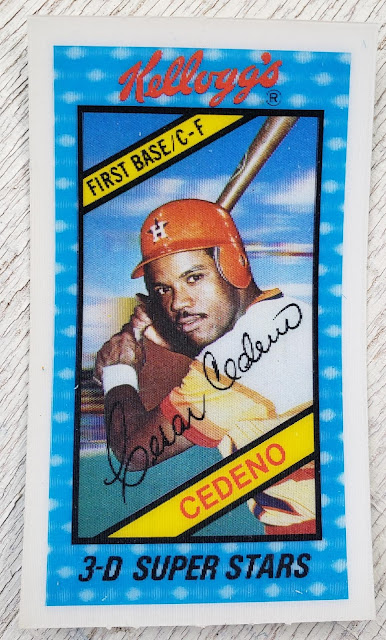 I completed the 1980 Kellogg's set a few days ago by simply ordering the whole thing online. That's the way to do it when it's cheap enough. Oddball sets from this time aren't exactly easy to pull together piece by piece, although that's my preferred method.
The 1980 Kellogg's set doesn't get a ton of respect, probably because it's not a Kellogg's set from the '70s but also because it's the second set after Kellogg's decided to downsize the width of its cards, which set off all kinds of alarm bells among kids from that time. "Is Kellogg's trying to swindle us? I think it's trying to swindle us!"
I've come around on those '79 and '80 sets (and '83, too). They don't look too bad with those dimensions and those sets seem to be able to avoid cracking as often as the wider sets. 1980 in particular seems to be almost immune from major cracking -- or at least not cracking by someone just looking at it.
I like the look of the 1980 set a lot -- it's a return to the blue-bordered sets of the mid-1970s. And 1980 means a bunch to me. It was an epic year -- the start of a new decade. I was beginning high school. And the 1980 Topps set had blue backs! I actively tried to complete it for the first time (and failed).
Today, 1980 is pretty ignored in the hobby, considered the final year of the Topps monopoly period and considered "boring" compared with 1981 and what was to come.
As someone who lived through it, I don't think it was boring at all. For instance, this was the last year I was digging through a cereal box looking for the free Kellogg's card inside.
I had done that every year for the previous four years and this was the fifth. We didn't get more than 1 or 2 shots at a box with cards inside of them. The 3D cards had moved from Frosted Flakes to Raisin Bran by now, but still we didn't buy cereal at a rate that allowed us multiple shots at cards. By the time we were ready for another box, the feature on the back had moved onto some plastic, spinning top or some other nonsense.
So, it was order the whole set off the side of the box and wait 4 to 6 to 8 weeks or go without.
My brothers and I ordered off the side of the box and divided up the set. I've been walking around with one-third of the 1980 set ever since, until now. 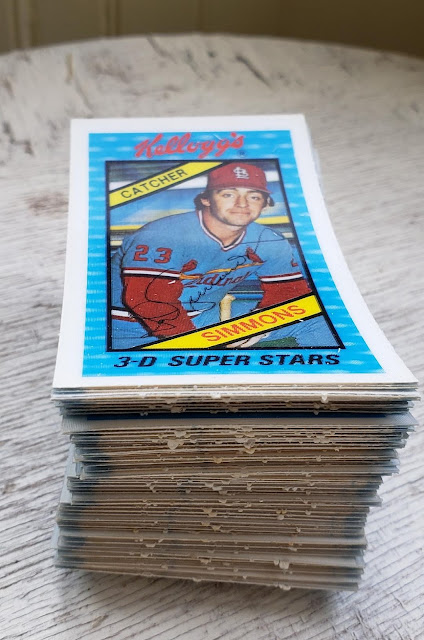 There ya go. Sixty of your greatest hits right there.
1980 may seem fresh and new to me -- what other year had two songs that started with "Another" go to No. 1?* -- but it's a fact it was 41 bleeping years ago. Because look at this: 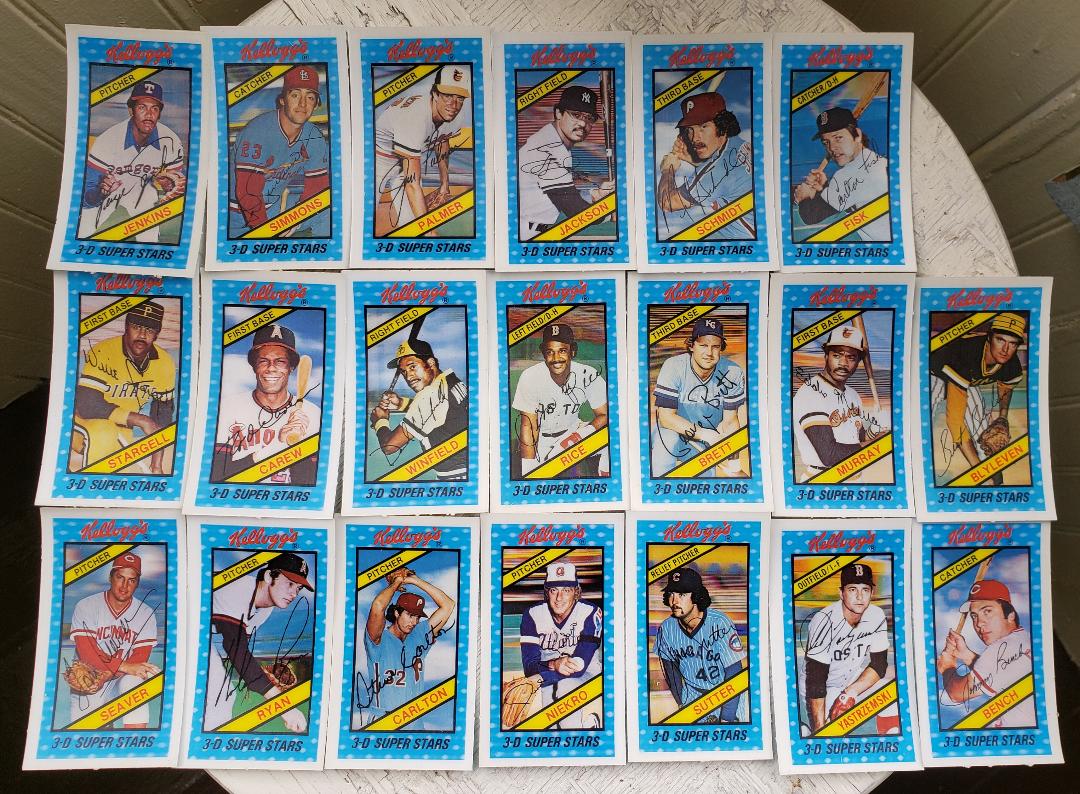 There are 20 cards from the set picturing players who are now in the Hall of Fame. That's one-third of the set! No wonder they were called 3-D Super Stars!!
That's how card sets can make you feel young and old at the same time.
The 1980 set arrived at a time when I was extremely well-versed in everything that was going on in Major League Baseball. My baseball awakening progressed from 1974 through the end of the decade and by 1979 or so I could tell you almost every player on every team -- or at least the ones who showed up on baseball cards. 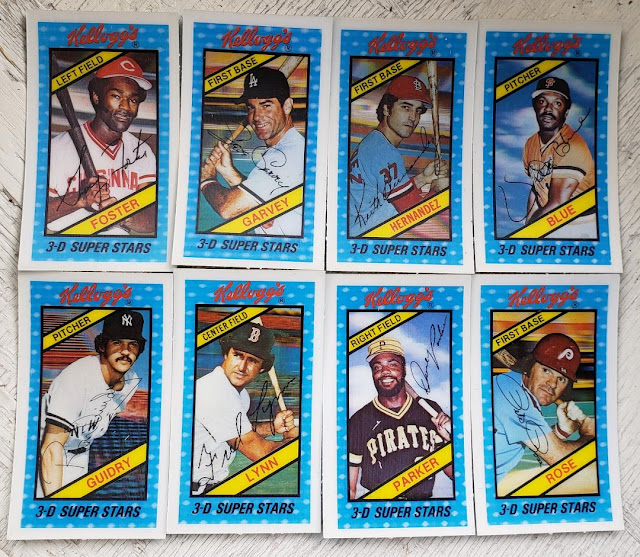 Those other guys were Hall of Famers, but here are eight more that we thought, at one point or another, would surely be Hall of Famers by the end of their careers. Maybe a few of them will someday.
Kellogg's, every year, liked to select the "it" players of the time, always including some young players who had been building up a couple years on their resume enough for at least Kellogg's to notice. 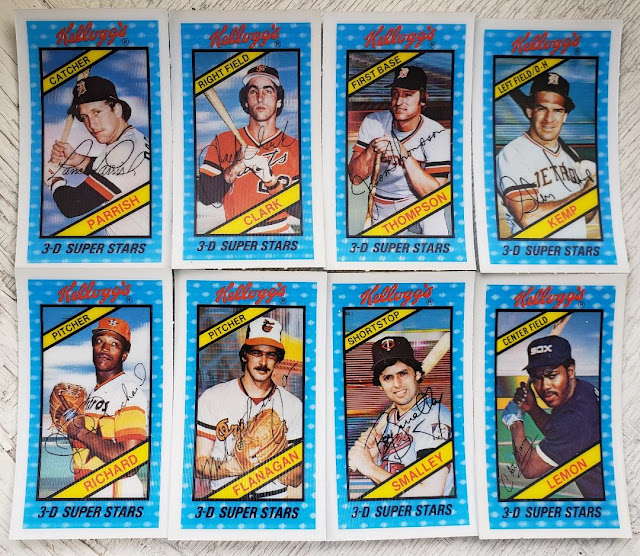 These were some of the young Super Stars of the time. A few carved out very good careers while others were cut short or just didn't live up to the early seasons. 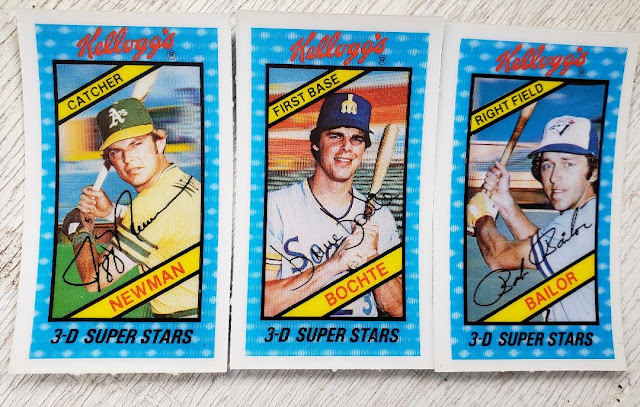 Then there is Kellogg's making sure every team has a representative, kind of like the All-Star Game.
But my favorite part of any Kellogg's set from this time might be the cult faves that still live on in the hearts of people who grew up during this time period. 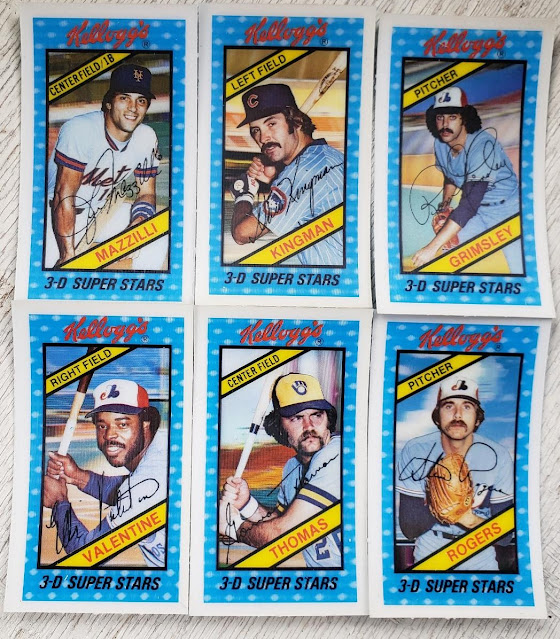 This is why I'm buying stuff like this, because it helps me remember what I like about baseball and history and baseball cards. While people are agonizing about what cards will look like next year or in the future or how much a box sells for these days, blah, blah, blah, I will always have stuff like this to collect and it will make me so much happier than anything that is current, and that you absolutely cannot get by shoving your hand into a box of breakfast flakes. 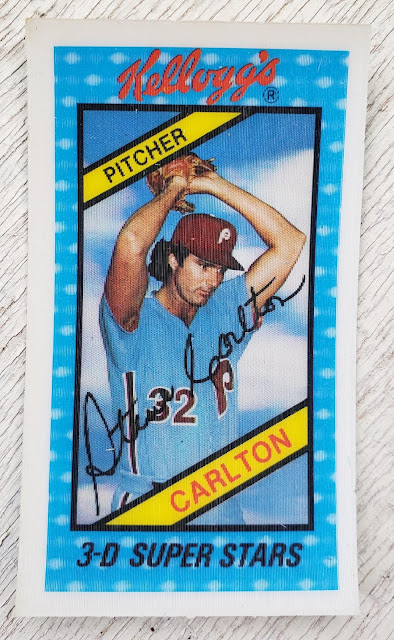 I would never perform that ritual again after 1980. The 1981 Kellogg's set was the largest, width-wise, ever and that seemed to bring cracking to a halt. But it wasn't available inside cereal boxes. Not that it would've mattered, I was quickly outgrowing reading cereal boxes. I didn't even want to eat breakfast by this point.
Kellogg's didn't return to appearing inside cereal boxes until 1983 and I had pretty much no knowledge of Kellogg's 3-D cards existing by then.
No, Kellogg's for me, was all about being a kid and digging through the cereal box. As a tribute to that time, I'm trying to complete them all. The 1980 set is my fifth Kellogg's set from 1970-83 I've completed.
It's going to be a lot more difficult from here on out. But finding the best things always require the most work. It wasn't exactly easy putting my hand through all those flakes without mom finding out.
(* - Brick In The Wall and One Bites The Dust)

bbcardz said…
I've always loved the look of the Kellogg's set, especially the first two years. I've still got the ones from the cereal boxes of my youth but nowhere near any complete Kellogg's baseball set. However, I was lucky enough to order the whole 1970 Kellogg's football 60-card set back in 1970 and I still have it. Unfortunately, those cards are very curled.
September 17, 2021 at 8:19 PM

bryan was here said…
No wonder I never saw the '80 Kelloggs set until a few years later. We didn't eat Raisin Bran at my house. I was just getting my card collecting started that year with two boxes of 3 packs from Kmart that were free when you got a cherry or Coke freeze. My neighbour managed the snack bar, so when the promotion was over, she gave me two full boxes and the promotional display poster.

I did send away for the '81, '82 and '83 Kelloggs sets, though. "83s came in Corn Pops, little puffs of air that were supposed to resemble popped corn. I seem to recall them floating on the top of the milk in the bowl and getting soggy in about seven seconds.
September 18, 2021 at 1:58 AM

Fuji said…
Whoa. Had no idea 1981 and 1982 Kellogg's weren't inserted into boxes of cereal boxes. It feels good to learn something new... especially when it's card related.

When I started chasing the Kellogg's sets from the 70's... I mainly focused on complete sets to save money. It's less fun, but way easier on the wallet. When I couldn't find complete sets, I bought large starter lots, but have put my 1970 and 1975 Kellogg's set builds on hold until the market settles down a little.
September 18, 2021 at 10:34 AM

RunForeKelloggs said…
Congrats on finishing another Kellogg's set. I don't know if a wrapper, if any, was used in 1983 because I've yet to see an unopened pack from a cereal box.
September 18, 2021 at 8:05 PM

Nick said…
I'm pretty sure 1980 were the first Kellogg's cards I ever saw. One of the local card shops had a stack of 'em for a quarter a piece, and I bought a bunch even though I wasn't big on oddballs at the time. (What can I say, I was a dumb high school kid then.)
September 18, 2021 at 9:30 PM

Jon said…
It would've been fun to be around to pull the 3-D cards out of cereal boxes. The only cards I remember coming from cereal were the boring early 90's Post cards, and the god awful Kellogg's College Greats basketball cards from the same time period.
September 22, 2021 at 1:54 PM