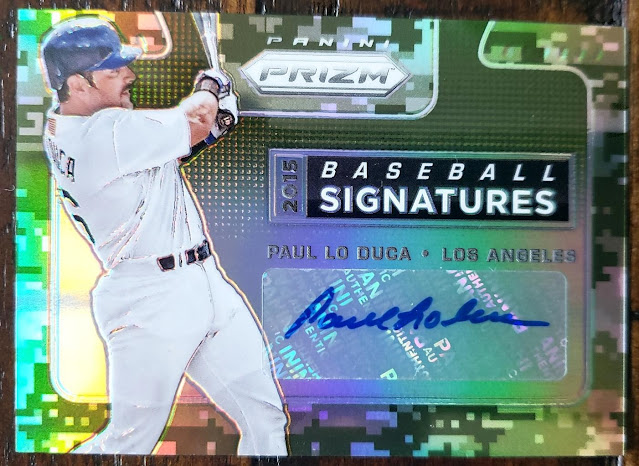 I received a Paul Lo Duca autograph of the unlicensed variety from Too Many Verlanders just the other day.
I really appreciated Dennis reaching out to me because right away I thought "I somehow don't have a Lo Duca Dodgers autograph in my collection." I've been thinking about how close I am to 200 different Dodgers in autograph card form for a little bit now and Lo Duca would get me one Dodger closer!
So when I received the card, I went right to the trusty Dodgers autographs binder and counted up what I had just to be sure ... and that's when I came across another Lo Duca auto. 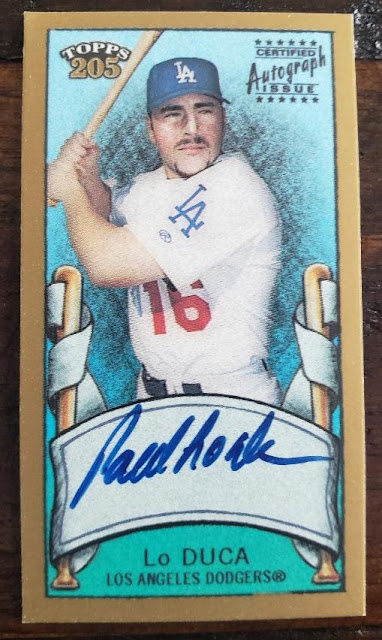 Damn, that's right. The mini Lo Duca auto! Mini Lo Duca has a page all to himself so I missed it the first time.
So even with the Prizm Lo Duca I am still at 190 different Dodgers for whom I have autos.
I thought this might be a good opportunity to look at which notable Dodgers have avoided getting into my autograph collection. I don't really seek out autograph cards, except for a couple of key folks, so this is an opportunity to see who might be less available relatively speaking.
For this exercise I compared who has the most cards in my collection and which of those do not have any autograph cards among that list. This is what I came with.
1. Mike Piazza, 591 cards
I have more Piazza cards than any player not named Clayton Kershaw. Again, this has happened organically. I don't really seek out Piazza cards. He just has so many.
My theory of why I haven't landed a Piazza autographed card yet is basically that Piazza's career matches up with the boom in autograph cards during the late 1990s. Autograph cards were a thing. Piazza was a thing. Therefore, those who grew up to value Piazza cards probably also grew up to value autograph cards and the combination of the two makes them hold on tight.
Also Piazza autographed card prices are stupid.
2. Shawn Green, 450 cards
Green is fourth on my list of the most cards in my collection. I think he falls into the same category as Piazza, although he arrived a bit later and also he isn't as popular. There just doesn't seem to be a lot of Shawn Green autos and also Green's Dodgers career was pretty short. There seems to be a lot more Green Blue Jays autos available and what am I going to do with that?
3. Jackie Robinson, 325 cards
LOL, this is never going to happen. First, his signature doesn't appear on many cards (a lot of them are cut signatures and those never appealed to me). Second, I don't throw around money like that unless I want to start living in a tent behind a strip mall.
4. Orel Hershiser, 297 cards
This one actually upsets me. In general, I don't care whether I get an autographed card of any player, except for a tiny number of people that's probably less than 10. This guy is one of them. I need to do something about this. (I do have his signed photo addressed to "night owl" though, which is something nobody else has).
5. Kevin Brown, 274 cards
Conversely, I don't care if I get a Dodger autograph of him. There doesn't seem to be may out there either.
6. Ramon Martinez, 248 cards
Probably should've happened by now, and I could find an IP auto for under 10 bucks easily.
7. Gary Sheffield, 247 cards
Sheff played for a lot of teams, like many players from his time. That cuts down on the number of Dodgers autographs available but there are some.
8. Cody Bellinger, 240 cards
Cody Bellinger's autographs seemed elusive from the start. His breakout career hit at the same time as an arrival of new people in the hobby, who seem to only want the best of the best. Therefore I can't afford most of Bellinger's sigs. ... However, if he continues to play like he has this year, I can find something dirt cheap by 2022.
9. Adrian Gonzalez, 210 cards
Like Shawn Green, I have to beat back relic cards of Gonzalez with a stick, but autograph cards of him are few-and-far between. Still, they are available, probably much more so now.
10. Yasiel Puig, 208 cards
Puig cards were all the rage 6-to-8 years ago, which explains why I don't have an autographed card of his. All in good time though.
That's a lot of notables missing from the autograph collection, considering I'm almost at 200 Dodgers. And I can also throw in Jeff Kent, Manny Ramirez, Rafael Furcal, Darryl Strawberry, Eddie Murray and Kirk Gibson (also, ha, ha, Roy Campanella).
Dennis also added to the envelope a quartet of non-autographed cards: 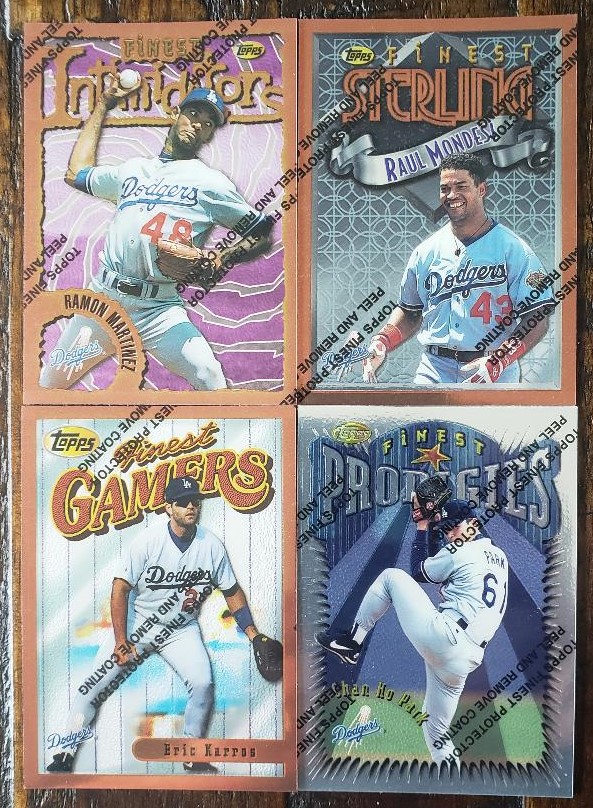 Even with '90s cards, I can spot a card that I don't have almost immediately. With this group, it's the Chan Ho Park prodigies card. Wooo! Newness! (Also, apologies to Dennis for my '96 Finest want list, I still have no clue about the wacky numbering on this set).
As for reaching 200 different Dodgers in autograph form, I probably have a better chance going with some older fellows from the '60s, '70s and '80s rather than most of the people on that top 10. It just goes to show you that the longer a career is over, the more it's out-of-sight, out-of-mind to most collectors. However, often, those are exactly the guys that I want.
So expect card No. 200 to be Mariano Duncan or Jim Gott or someone like that.

Brett Alan said…
Yeah, as a Mets collector I'd also very much like to have a Piazza auto, but I've never seen one at a decent price. It's funny how some Hall of Famers can have autos available at around $10, but there are others who are at least somewhat comparable where there's nothing even close to that. Of course often it's guys who signed really high quantities of cards when companies like Nabisco did autographed card promos in the 90s.
September 22, 2021 at 9:31 PM

Nick Vossbrink said…
Jim Gott *does* sign TTM. I've not gone ahead and counted the number of different Giants players I have. I have things organized but not like that.
September 22, 2021 at 9:57 PM

Nick Vossbrink said…
Also your Shawn Green numbers continue to scare me since I haven't even started to look for his cards yet.
September 22, 2021 at 9:58 PM

Fuji said…
For 10+ years, I was trying to track down a Piazza autograph... but as you stated... they sell for stupid prices. I hope Topps adds Orel to their Archives Fan Favorites autograph checklists before their reign ends. I'd love to add his autograph in a Dodgers uniform at some point.
September 23, 2021 at 7:02 AM

BP said…
The two LoDuca autographs look different. One is more scrunched than the other - probably because of the space allotted to the scribble, but they do look different.
September 23, 2021 at 3:11 PM

Adam said…
Yasiel Puig … now there’s someone who disappeared off the baseball map completely!
September 24, 2021 at 5:29 AM

Jon said…
The image on that mini is kind of creepy looking. It looks like they pasted his head onto a child's body.
September 28, 2021 at 8:23 AM