No gold star for you, Topps 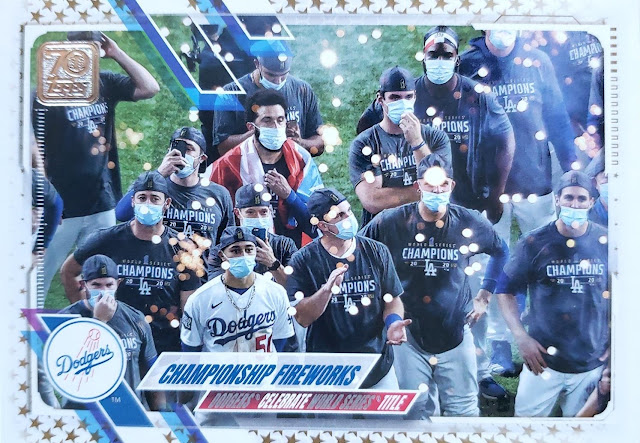 As card-lovers, and general whiners about everything that Topps does, there are plenty of moments we can cite as reasons why Topps is losing its license with MLB.
Lots of people have serious thoughts on this matter. I'm not that serious. But I do think, in some way, the little things that irritate me about modern Topps products all added up to something important.
For example, one of the flat-out mindless things that Topps did recently is issue parallels of its already embarrassing 2021 flagship design, by blatantly copying a competitor. An inferior competitor, IMHO. And it's one of the dumber things that competitor has done (among many).
Topps released different versions of its 2021 factory set that includes different kinds of parallels. I haven't looked into it more than that because I haven't been interested in buying a factory set since the mid-1980s. One of those parallels required throwing gold stars along the borders.
If that doesn't make you think of Panini, welcome to the hobby! Let me show you around on your first day. It's a weird place.
When Panini started issuing parallels of its Donruss cards by throwing various decorations on its borders, from traditional symbols to emojis and other debris, I thought it was pointless, unattractive, not creative and plain silly. Even beyond what I think of the tactic, I don't want decorations on my cards. This is not a craft hobby. Put away the stickers and calligraphy pens. I don't even like how Allen & Ginter has been doing its gold- and black-border mini parallels the last several years. I like solid borders for parallels (think '08 A&G minis).
I don't have problems with solid-color border parallels. Maybe I should. But to me they are attractive and don't look like a grade-school project. Plus, when I mentioned Panini's "toaster" parallels or whatever the heck they're throwing on the sides, I said you could parallel every collector blind with an infinite number of decoration parallels (the "garden hose" parallel, the "motor home" parallel). It could go on and on and get really ugly (wait until you see the covid virus parallels). Solid color parallels don't get into that murky business.
So, that's what Topps is reduced to now, copying one of Panini's silly-and-cynical tactics.
These are ridiculous: 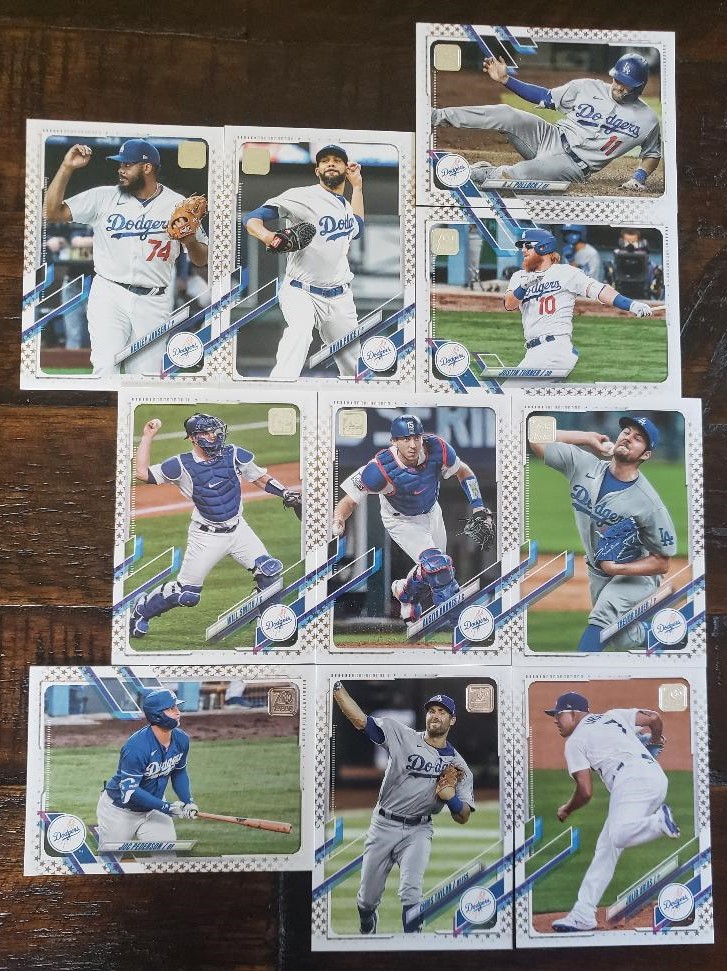 The one at the top of the post at least goes with the celebratory theme of the card, I guess.
I received all of these from Johnny's Trading Spot (I'm assuming he's kept my beloved Kershaw, Buehler, Betts and Bellinger?). He took the plunge on one of these factor sets. Props to him for falling on the knife for the rest of us.
I suppose it's better that Topps confined this to a one-off factory set rather than placed them as a parallel option in packs like Panini does.
But I hope neither Topps nor Panini ever does this again.
Well, Panini probably will. It's Panini.
But Topps, as my recently departed high school math teacher used to say, "you should know better."
You used to anyway.

Adam said…
I’m with you. I don’t like the different designs in the borders of my cards. Plain colors (gold, green, purple, etc) is fine. But yeah, the emoji parallels and what not need to go.
September 20, 2021 at 7:52 PM

Johnnys Trading Spot said…
Yeah I kept those 4 (PC guys). Just think they did blue stars too. Now the foilfractor 1/1 set. That may have been something, not sure because I've yet to see one, oh yeah there is only 1 set of those out there.
Topps did this last year too.
September 20, 2021 at 9:08 PM

Brett Alan said…
I did buy the Mets team set of gold star parallels last year on eBay. Where most parallels work better when the cards have actual borders, these worked much better with last year's designs. Still pretty pointless, but nicer looking. You're of course right that this batch looks very Donruss-esque, not helped by the way the two designs this year are kind of similar.
September 21, 2021 at 12:24 AM

GCA said…
Stick with solid colors, and don't do ANY parallel inserts!

Though for fun, they should do a COVID parallel. Smilies with masks or little virus planetoids. If I cared about current players, I'd buy a set.
September 21, 2021 at 12:24 PM

kcjays said…
I confess, I purchased a Royals Gold Star team set last year. I’m not sure if that was the first year for them or not. It was, at least the first year I was aware of them. I hadn’t looked for a team set this year. I’m still trying to decide if I want to pursue a Royals team set of the Green Gypsy Queen cards. For some reason I really like that parallel.
I agree the solid colors are a better option. I do however like the idea of poop emoji Yankee cards.
September 21, 2021 at 3:16 PM

Nick said…
This is one of those things that just feels like a complete waste of time and brain energy on Topps's part. Surely there's a more innovative idea out there than decorating regular base cards with - wait for it - GOLD STARS on the borders?
September 21, 2021 at 7:43 PM

Mark K. said…
Parallel cards are stupid IMO. Usually the choices of different color borders are hideous. Reverse negative images are dumb too. I do like photo variations but don't really consider those as parallels.
September 26, 2021 at 3:56 PM