Match the song title: Back in Black 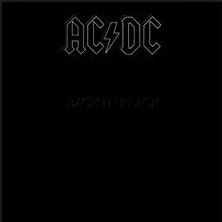 I'm taking another break from the 10th Anniversary Giveaway. In terms of picks, it's Henry Blanchette's turn to select (followed by gcrl). He may pick by commenting on my last post, but I won't set another selecting deadline until tomorrow's contest post.

OK, as you know, baseball season is over and it was another garbage finish from my perspective. No offense to the Red Sox, who I am well-aware are not the Yankees, but really, I'm in no mood to discuss the close of the season.

This is my mini-mourning period (though not as severe as last year). So the next Match the Song title post is appropriate. This famous album was created as the band mourned the death of their great singer Bon Scott.

The first time I heard AC/DC on the radio was probably when many people did, when the band released "You Shook Me All Night Long" off their "Back in Black" album in the late summer of 1980. Produced by Mutt Lange, "Back in Black" was a bit more polished than heavy metal music of the 1970s and more accessible.

I didn't first come across the album until the following spring. I would bike a few miles down to the park where my younger brother played youth baseball. It was an excuse to watch baseball and hang out with my friends. Somebody -- I don't remember who -- had one of those large boom boxes popular at the time, blaring "Back in Black".

I had never heard something so raucous. Keep in mind, this is a period in which Kenny Rogers and Dionne Warwick were still flying high on the charts. Schmaltzy duo songs -- Lionel Richie/Diana Ross, Eddie Rabbitt/Crystal Gale, Kenny Rogers/Sheena Easton, Kenny Rogers (again)/Dolly Parton -- dominated the airwaves. AC/DC spoke to me in a way those sappy songs didn't.

The next real "Back in Black" memory for me came six years later, on this very day. My future wife and I danced to "You Shook Me All Night Long" in a bar in St. Louis, our first dance together. Although AC/DC is about as far on the other side of spectrum from "romantic" as you can get, the song and album has always been awesome for exactly that reason.

But, eewww, that was starting to get as sappy as a Kenny Rogers-Dottie West duet (yet another one, Kenny????). Let's turn to trying to match up some trading cards with some hard driving songs from the boys from Australia.

Take a look at the track list and let's get this party going:

Match the Song Title: "Back in Black - AC/DC" 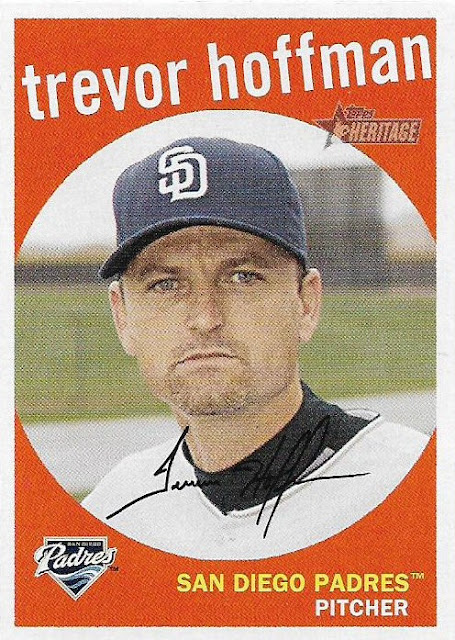 Track 1: Hells Bells: The walk-in music for Hall of Fame closer Trevor Hoffman. I never liked Hoffman much, but he knew how to pick his music. 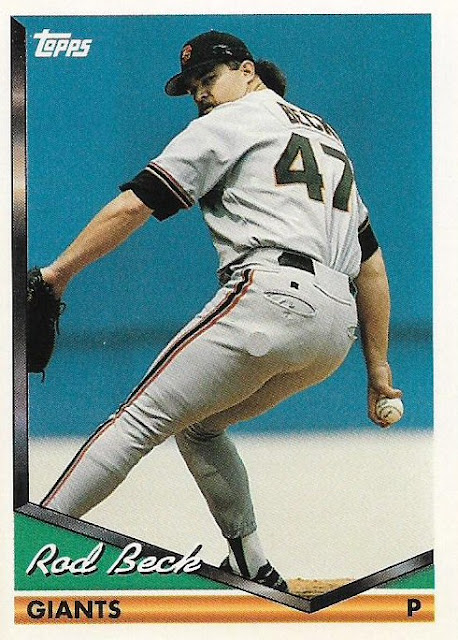 Track 2: Shoot to Thrill: Second verse, same as the first. AC/DC gets accused of writing the same song over and over, so let's go with another closer from another one of the Dodgers' rivals. "Shooter" lived hard and died young, much like a protagonist in an AC/DC song. 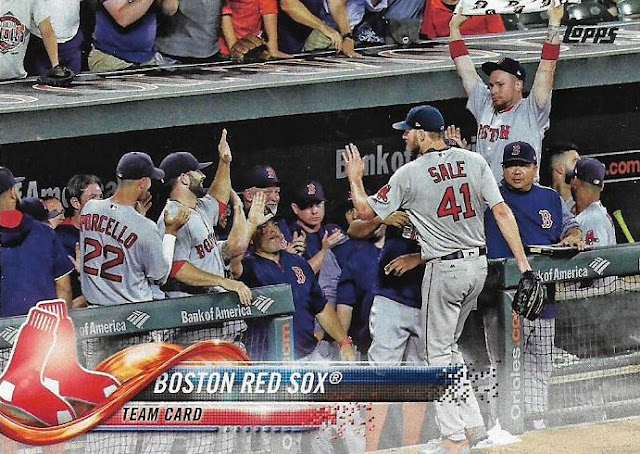 Track 3: What Do You Do For Money Honey: If you're a baseball player, you play baseball for money, honey. If you want a lot of money, you play for a team with a lot of money, like the Red Sox. Teams pay for championships with money, that's a fact. If you want to win titles through bargains and coupons, you're better off playing fantasy baseball. Because you're living a fantasy. (P.S.: Love Angus Young's playing on this song). 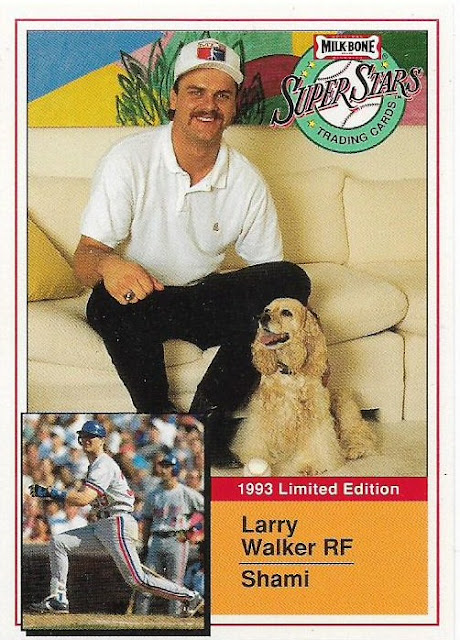 Track 4: Given The Dog A Bone: These next two songs are about only one thing and it's not giving your pet doggie a snack. But we'll pretend it is for the sake of showing this Milk Bone card again. 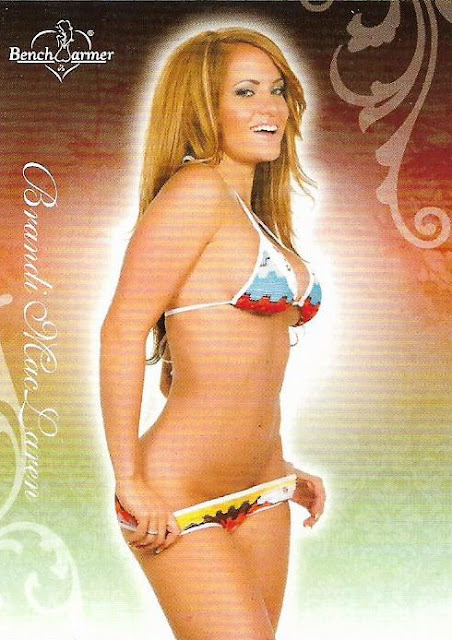 Track 5: Let Me Put My Love Into You: OK, I could sidestep the last song, but there's only so much I can do with this. I'm a guy and this song steers me in just one direction. 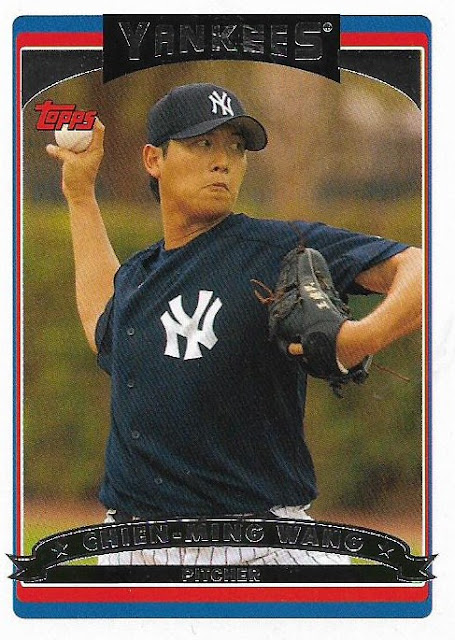 Track 6: Back in Black: Still remember the opening coming out of that kid's boom box. Best AC/DC song of all-time ...

The Yankees can insist they wear navy and are "the good guys" all they want, but they actually wear the black hat and are always from the dark side. It's not easy to find a card of a Yankee in one of those dark jerseys because Topps is trying to shove their pinstripes down our throats all the time, but I got one! The worst part of the offseason is knowing your team didn't win and another year is coming up of rooting against the Yankees getting a title before your team does. 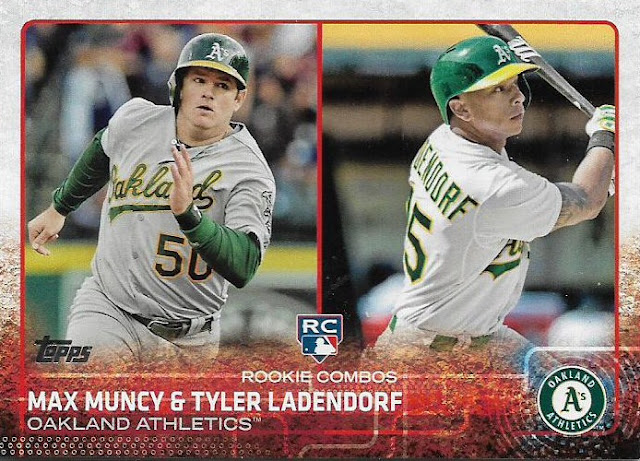 Track 7: You Shook Me All Night Long: So many feels with this song. One of those songs that you wish would never end.

The best game of the entire World Series, the entire postseason really, was the 18-inning Game 3, which I was kind of hoping would never end. It was dominated by memorable moments by the Dodgers, particularly Max Muncy's game-winning home run (and his barely foul home run). Muncy's rookie card has been doing good business lately. It's one of the too few Topps cards of Muncy. 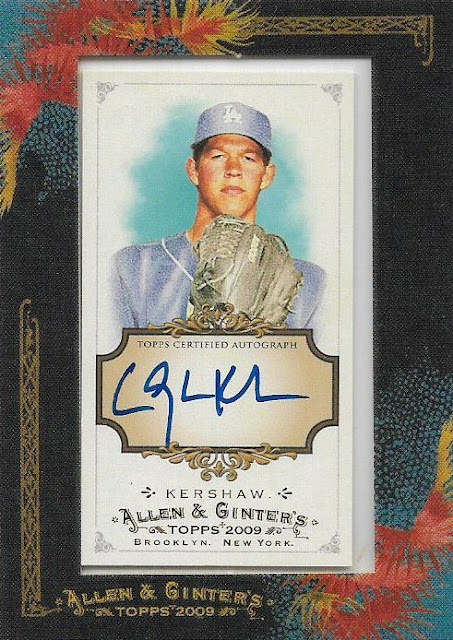 Track 8: Have a Drink On Me: I have 617 different Clayton Kershaw cards. I want more.

In case you haven't heard, Kershaw can be a free agent this offseason and sign with a different team. It's likely that he remains a Dodger, but the media and the online community are bent on creating doubt in Dodger fans' minds. Uncertainty is their fuel and their drug. Then there are the trolls -- those who say Kershaw is a choker, that he can't with the big game, all that garbage that was particularly inaccurate in a Game 5 in which the Dodgers scored just one run. Do you think at the end of his career, people are going to care about that? I doubt it, judging by the appreciation for past superstars who didn't manage to win a championship.

That aside, Kershaw is a better man than any troll will be. What he does for his teammates, his family, and humanity deserves more attention than his ability to pitch in the postseason. That's why I will pay for his drink.

Send me all your Kershaw cards. 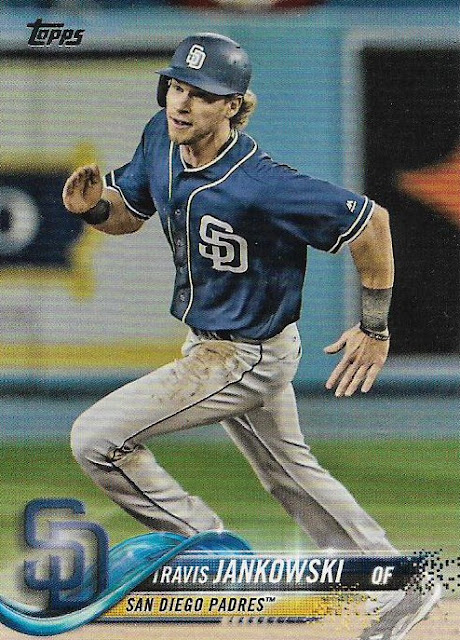 Track 9: Shake a Leg: I've mentioned this before, but there aren't enough cards of players on the base paths. For every 45 cards of a player batting there is a card of a player running. It's part of the game! Shake a Leg, Topps! 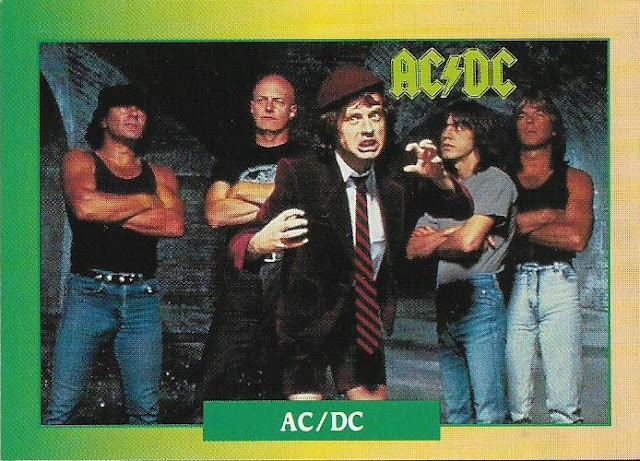 Track 10: Rock and Roll Ain't Noise Pollution: The song on the album that climbed the highest on the British charts.

That large package that Johnny's Trading Spot sent me recently contained just about the entire set of 1991 Rock Cards (I haven't examined yet to see if it's complete). As you may know, this set contains the same hard-rockers over and over again, Anthrax, Winger, Poison, Megadeth, etc., etc., etc. My personal favorite are the AC/DC cards. 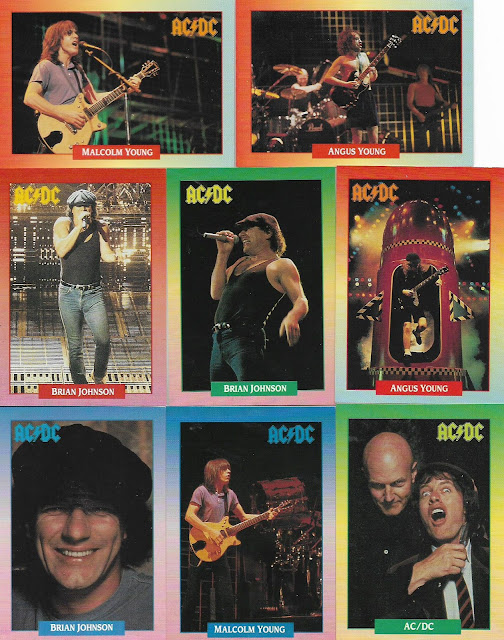 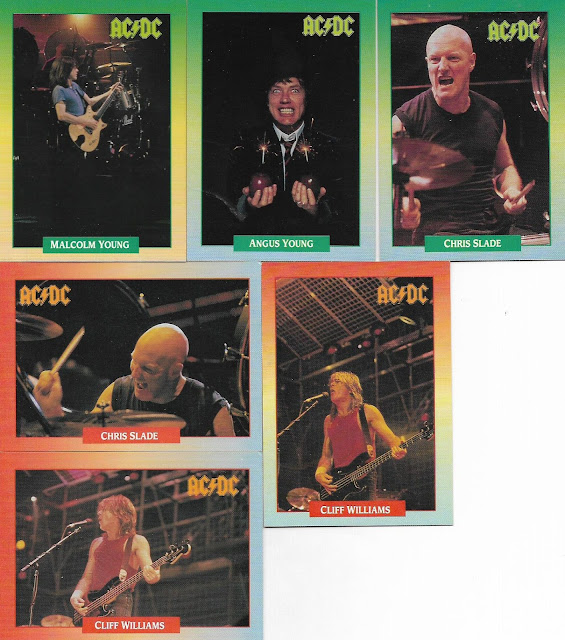 
And that's where the needle comes off the record.

Back in Black is one of the best-selling albums of all-time and like many albums released during my high school years, it's the source of tremendous pride for me (something that I can take absolutely no credit for, by the way).

During the months that followed Back in Black's release, it received some criticism for being "too primitive" or "too simple." The lyrics were "uncomplicated" and the sentiment "animal."

But that's what rock n' roll is, right? Lean and mean. Songs about girls and explosives and dying young. Balls to the wall. I like complicated as much as the next music fan, but I think I like uncomplicated a lot more.

Hell's bells, this is a great album.

Fred Pike said…
Great album. Even at 67 years of age I still prefer heavy metal over most other styles. Thanks for the great post.
October 29, 2018 at 8:08 PM

Johnnys Trading Spot said…
Absolutely an awesome album. Rosington and Collins (from the original Lynyrd Skynyrd) had a huge following in the 80's with all the cover bands. I think that Rock n Roll set was complete with stickers too.
October 29, 2018 at 8:19 PM

Anonymous said…
Great Album... except I can no longer listen to 'Shook Me All Night Long'. The first 10,000 times were awesome - but no more. The rest of the album was not overplayed (outside of Back in Black, but that beginning riff is timeless) and still sounds great today.

Fuji said…
I'm on a mission to add this LP to my vinyl collection. And Kershaw will definitely be a Dodger next season.
October 29, 2018 at 11:53 PM

Alan Deakins said…
-Great post..It is going to be an interesting offseason in the NL..Milwaukee, Atlanta, LA, Cubs will all be NL contenders again...Who makes the big splash in offseason and pushes back against the real evil empire, the American League?
October 30, 2018 at 1:05 AM

arpsmith said…
One of my favorite albums of all time from one of my favorite bands, nice choice in music and cards. I have to get those AC/DC cards, haven't seen them before. I heard a rumor that Clayton's favorite color is orange - j/k - there is no way he leaves the Dodgers.
October 30, 2018 at 3:21 PM

Baltmoss68 said…
I came into enjoying AC/DC late but really like them now. And I’m the nerd who loved those sappy duets ... but they never enhanced my romantic life😕
October 30, 2018 at 3:42 PM