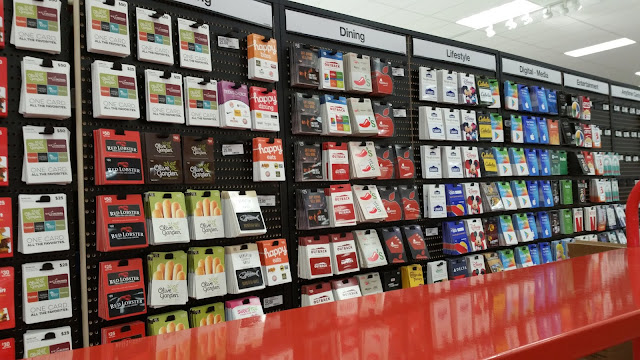 I haven't done too well finding the right time to start this giveaway. I thought Monday would be perfect as it was a day off and there's no baseball on TV.

But Target decided to complicate things by removing all its trading cards from the store -- from the very spot they've been residing for at least 10 years -- and replacing it with a wall display of gift cards. I was going to the grocery store and thought I'd swing by Target to see if Topps Update had made an appearance. Instead I was greeted by chain restaurant overload.

Needless to say, I was unnerved and quite upset. I immediately headed for the toy department to see if they were stashed there. I went up and down every blasted toy aisle. Nothing.

On the way back to the front I was in such a state that I didn't even bother to avoid the people who act like they're the only ones in the store. You know those people right? It's getting to be an epidemic. My mom taught me to step aside when you're starting to share the same space with someone. Nobody else's mom apparently teaches that anymore. So I clipped the 20-something couple in outdoor gear joking around who should've seen me coming but didn't. I sideswiped the dude standing in the middle of an aisle intersection for no reason. I stepped on an old dude's shoe who didn't move to the side as I stayed in my lane. And I bumped a woman and her baby stroller because a baby stroller is not an automatic sign of the right-of-way.

I didn't care. In the least. Target had taken away my cards. The most consistent source for immediate card gratification decided a discounted trip to Red Lobster was more urgent. Unless they change their mind (and I've already got customer assistance on the line) I'm going to have to go to Walmart more often -- I really hate the thought of that -- for my card fix.

(I've been told that at other stores, Target shifted the cards to other places in the store, such as the electronics section. I'll have to check that out).

So, yeah, Target has trashed trading cards and the Dodgers are in the World Series against my brother's favorite team (his most recent text: "surrender or die"). But I'll get this giveaway going for ya!

So, as you know, this is a card draft and I've already shown the goodies available for the 31 people eligible to participate.

I'm going to try to get this giveaway completed as quickly as possible as this is a content-driven blog and I don't want to drag this out for weeks. So here is how it will go:

I will try to post a new giveaway post as soon it's the next person's turn to select. That person has a full 24 hours to make a selection. They can either select in the comments of the post or email me their pick. But if they don't do it in 24 hours I'm moving on to the next slot.

So, here are the prizes one more time: 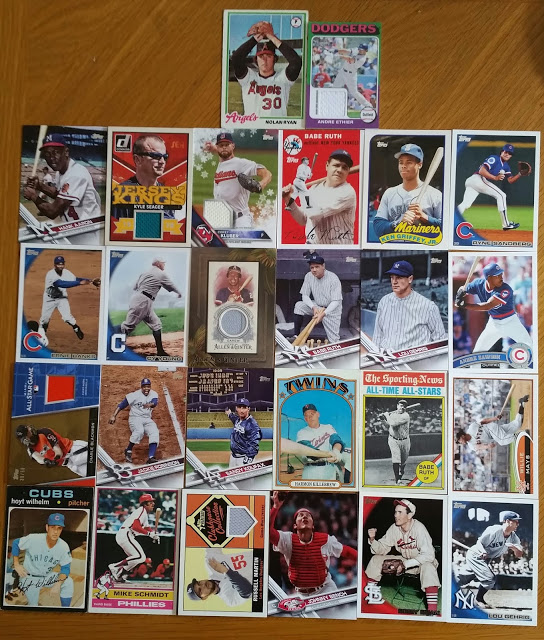 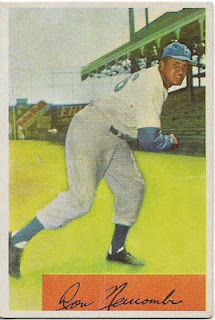 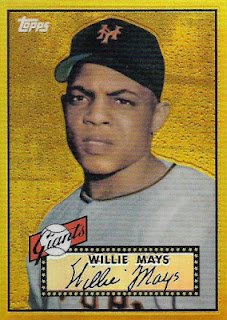 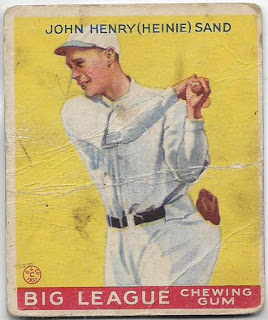 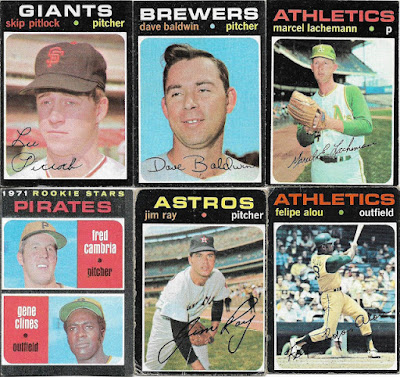 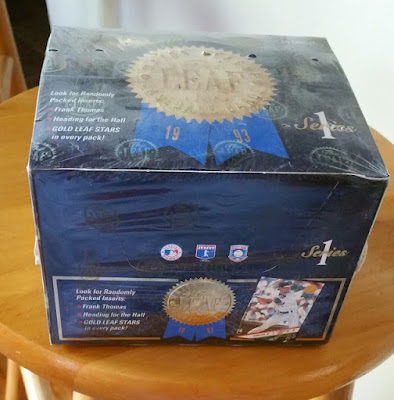 To decide what order the giveaway participants will pick, I let the randomizer do the work. I randomized the participants 10 times -- for 10 years of this blog, of course! -- and this is the order for picks: 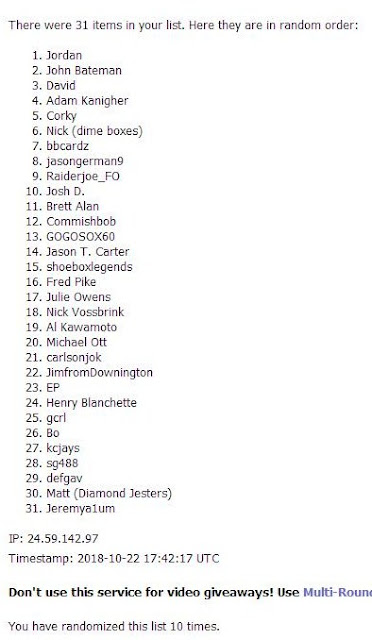 Jordan gets the first pick of the giveaway!

Once he makes his pick, John Bateman will go next, followed by David and so on.

I'll try to get the next post up so the next person can make their pick as quickly as possible. My daily schedule, though, may interfere (I often schedule posts ahead of time, which is impossible with a "live giveaway" like this).

If someone doesn't choose to select, I understand. We'll just skip that person's turn (if I I have a card not on the giveaway list that I think that person might like, I'll set it aside for them as a sort of consolation prize). If I have prizes leftover at the end of the 31 people selecting, I'll go to the next people on the list. Here are the first few people who will get a shot if there are any prizes remaining:

And there are others after that.

So is everybody set?

Jeremya1um said…
My wife went to our Target today, and the same thing happened. She said they moved them to the electronics section, and that there weren’t as many as usual. This is a real bummer. I hope other stores don’t follow the trend, or else I may have to resort to going to the overpriced card shop about 10 minutes out of the way of my normal commutes.
I hope life gets more normal for you, and go Dodgers!
October 22, 2018 at 7:46 PM

Jordan said…
Ooh. Never had this much power before. Thought long and hard about this one.

Chris said…
I wish I could enjoy the draft but you're giving me a heart attack with this Target thing. I have no LCS; if Target takes away my card supply I wont have any easy access to packs/boxes. Will have to check mine this weekend even though I'd planned on cutting back for a while.

Matt said…
You know, I'm actually relieved to be 30th. There is so much good stuff here, I was having a hard time prioritizing the choices. Thanks again!
October 22, 2018 at 9:46 PM

Adam said…
I hope that my local Targets haven't done the same thing. Then again, I live so far off the beaten path that stuff like that usually takes a while to happen around there. If that is the case though and they have cut back on the selection and have moved to electronics (which is where most of the collectible stuff like Funkos and various other tchotchkes seem to reside), that's a real sad day.
October 22, 2018 at 10:49 PM

Commishbob said…
My closest Target hadn’t moved their (meager) card section as of a few weeks ago. If they remove it that’s about it as far as local retail supplies go since the WalMarts around me never get anything except Series 1 flagship. I wonder how Topps’ agreements with the two are affected. They have had ‘exclusives’ with both stores.
October 22, 2018 at 11:50 PM

Commishbob said…
I meantime add...I’ll be traveling the next day or so and I don’t want to hold up the show. If my turn comes up put me down for the oldest item still unclaimed.
October 22, 2018 at 11:54 PM

Fuji said…
Oh man. I hope that this isn't a nationwide trend. There's never anything good in my local Targets, but I love shopping for blasters at the Portland and Las Vegas locations.
October 23, 2018 at 10:21 AM

CaptKirk42 said…
UHOH I'll have to check my Target. I was going to go last night but didn't since the Chipotle I go to is in the same shopping center. I had my burrito bol from Chipotle but didn't do a Target Run. They had the card section in the first isle by the last registers, before the Pharmacy and vitamins, cold medicine, health related "drug store" stuff section.
October 23, 2018 at 11:36 AM

Bulldog said…
Great stuff. I too will be checking out my Target and will be so disappointed if their cards are gone. Thanks for all you are doing for folks with your contests.
October 25, 2018 at 8:06 PM