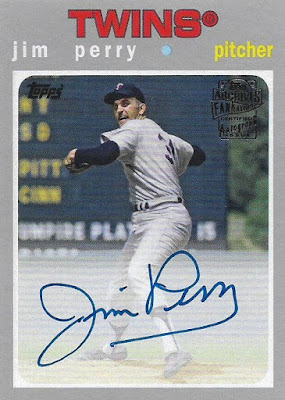 A few days ago I started seeing collectors showing off their redemption arrivals from 2018 Archives.

I began to wonder when my Jim Perry redemption autograph would show up. But I needn't have worried. Just yesterday I received a friendly announcement from Topps saying that my 2018 Fan Favorites Autograph 1971 Silver Parallel Jim Perry (boy, that's a mouthful) was on its way. Keep an eye out!

This afternoon it showed up in the mailbox.

I admit it's rather pretty. It resembles 1971 Topps about as much as I resemble a mountain man, but let's not quibble with a card that shows a scoreboard listing the Mets vs. the Padres and the Pirates vs. the Reds! I also appreciate the action picture, as '71 Topps was known for that. 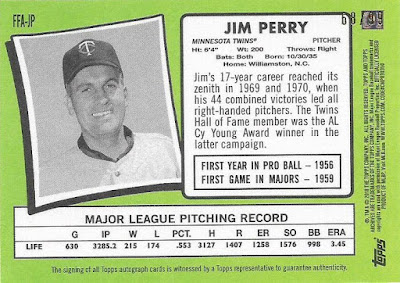 There is the back in all its 1971-like splendor. The stamping is difficult to read but it's numbered 68/99.

As I mentioned when I pulled the redemption card, Jim Perry is a little before my time. His last card issued during his career was in the 1975 Topps set. I was 9. And I didn't pull his card that year.

Perry will be 83 years old by the end of this month and judging by his signature, he is holding up well. Those Perrys are a sturdy bunch. Younger brother Gaylord is 80.

I'm attached to this card right now because it's shiny and new, but admittedly it doesn't fit into my collection. So I'm willing to trade it if the right offer comes along.

Thanks for signing and thanks for reading.

Nick Vossbrink said…
That's kind of a disaster of a 1971 homage on the front but I appreciate that the back is an actual card back instead of the all-to-common "congratulations you have an authentic autograph of " waste of space that counts as a card back nowadays.
October 11, 2018 at 7:41 PM

Grant said…
I was hoping you'd post this when it arrived but, yikes, that's a gross card-front with the ginormous "R" and the gap between Jim and Perry. Regardless, it's a Twins auto of a Cy Young Winner, so it's never not good.
October 11, 2018 at 8:15 PM

Brian said…
That's an awesome photo! I agree that Topps could have tried a little harder on the front design.
October 11, 2018 at 9:02 PM

Fuji said…
I know that I complain about Topps way too much sometimes, but they did one heck of a job with this particular card. Kudos to Perry too. That signature is beautiful.
October 12, 2018 at 8:43 AM

Baltmoss68 said…
The action photo is top notch, the signature is even better(and no sticker!) I like the front design and love that the back is a real card. As far as modern autographed inserts go I’d give it at least a 9 out of 10!!!
October 14, 2018 at 7:16 PM

Bru said…
This came out pretty nice! Really bizarre and interesting to see ‘71 with a gray border. Makes me think about toying with the border color in some customs.
November 5, 2018 at 8:08 PM