Status of the All-Boys of Summer relic team 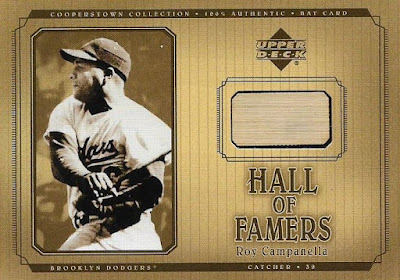 I received this bat relic card of Roy Campanella in the mail today.

I knew it was coming. Jeff of Cardboard Catastrophes had emailed me and said that he had picked it up cheaply at a show and wondered if I wanted it.

Of course I did. Relics may not mean what they once did, but relics of Hall of Fame legends will always mean something. It also happens to be my first relic card of Roy Campanella and I think it's about time this Dodger fan had one of those.

The other card that Jeff picked up was also a Hall of Fame Brooklyn Dodger. But I owned that one already. 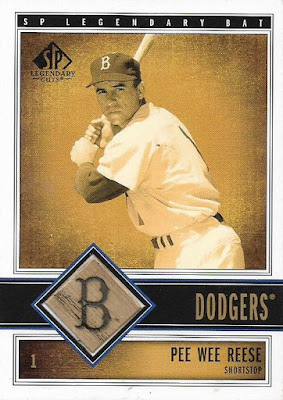 This is one of three relic cards I own of Pee Wee Reese. It still seems crazy silly that I have THREE relic cards of one of the biggest legends in Dodgers history, but I certainly am not sad about that.

These are the others: 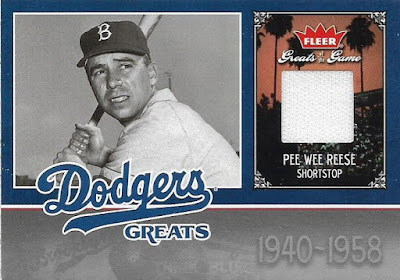 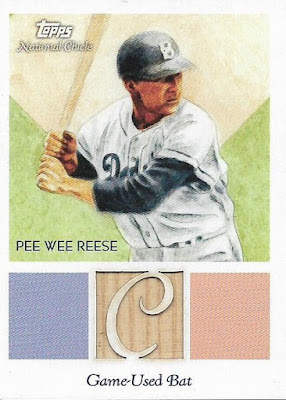 Being able to produce two Hall of Famers from one of the most famous teams to ever play, the 1952 Brooklyn Dodgers, instantly made me wonder how close I was to owning a relic card of every starter from that team.

Here are the starters:

You've already seen the catcher and the shortstop. Here are the others that I have: 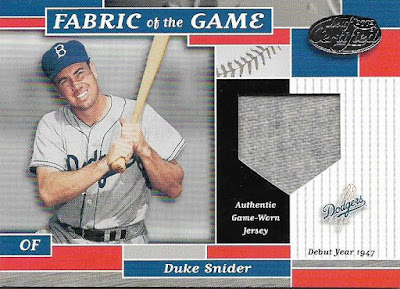 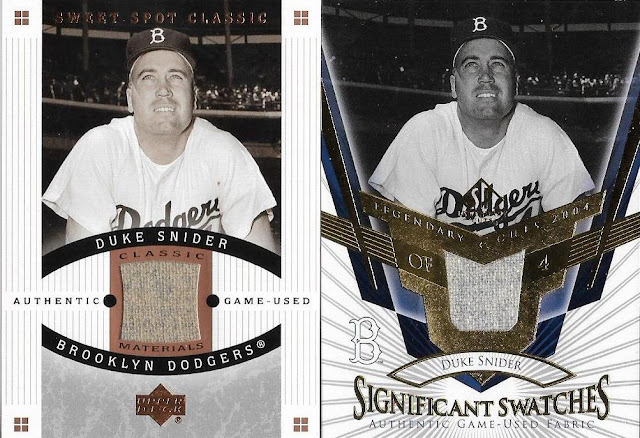 Three -- yes, three -- Duke Snider relics. The two vertical ones look a little too similar, I would say. 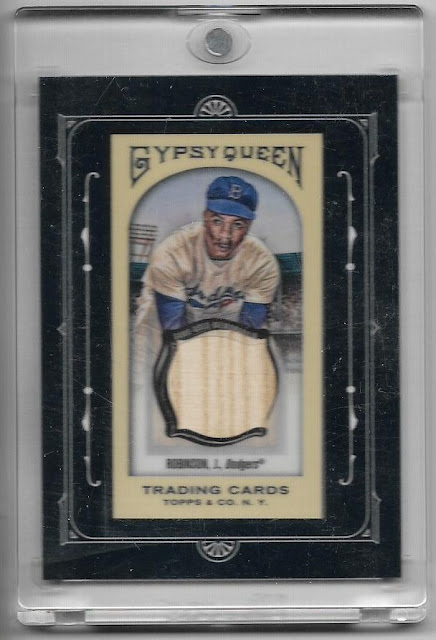 And here's Jackie Robinson. Sorry, I neither have the time nor desire to take it out of its screw-down so you will have to gaze upon the window longingly. No nose prints!!!!

After Snider and Robinson, Campy and Pee Wee, though, that's it.

I don't have relic cards of Hodges, Cox, Furillo or Pafko.

The Hodges relics are quite plentiful, so plentiful that I don't know how one has escaped me. I expect to fill that position on the team next.

Carl Furillo relics are also plentiful, although most of them come from Panini. I'd rather see a Brooklyn Dodgers logo on my Furillo relic card.

The other two may be tough. The only Billy Cox relic card I could find in a brief search was a stadium-seat relic that is selling for too much money. The only Andy Pafko relic cards I saw were from his days with the Milwaukee Braves and that does me absolutely no good.

So forming a complete All-Boys of Summer relic team may be a little trickier than I thought. But that doesn't mean I'm not going to try. It's a way to keep relic cards relevant.

Zippy Zappy said…
"Sorry, I neither have the time nor desire to take it out of its screw-down so you will have to gaze upon the window longingly."

Jason T. Carter said…
This is a cool project. I think I have a few of the Big Red Machine, but the only one I can tell you for sure is George Foster because I had him autograph it on the bat sliver when the Reds Hall of Fame hosted a meet-and-greet. I'll have to dig through the few relics I have and see who I'm missing.

AdamE said…
I'll look and see if I have a game used Preacher double for you. I don't think I do though. Most of his GU were also autographed so they were pricey and I don't even have one of them for myself. The GOTG Dodger Blue is the only one I can think of that wasn't autographed.
October 22, 2018 at 12:19 PM