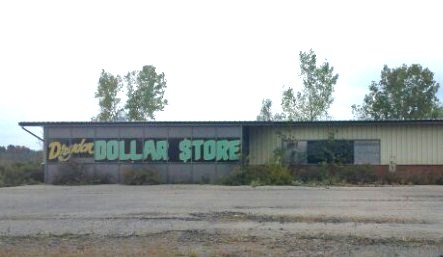 For as long as I have been writing this blog, I've always been confused about the availability of cards at the average dollar store.

I haven't had much success finding cards at dollar stores. Outside of the Real Deals dollar store where I live -- which I've written about at least a dozen times -- I've found next to nothing in other dollar store ventures. The most familiar dollar store chains, Dollar General, Dollar Tree, etc., seem to be biased against cards in their stores, which seems odd to me considering some of the bizarre stuff that you always find in dollar stores like those stupid marshmallow orange circus peanuts.

However, I've read a few times about bloggers actually finding cards at dollar stores! It stuns me every time because of my own lack of success.

So, I decided to do my own little in-person study. Is finding cards at your average dollar store a myth or fact?

I was heading back home from my folks' house a few days ago. Normally, I take the interstate, which is efficient but also mind-numbing and filled with people just itching to get into an accident. Lately, I've been taking the more scenic route. Upstate New York doesn't get enough credit for its beauty. It's a joy to drive.

So during the three-and-a-half-hour ride back from my parents' house a few days ago, I made certain to stop at every dollar store I saw and check whether they had cards. If they did, I would take a picture of that dollar store, kind of like a badge of honor for that outlet.

Here is the sad tale of my journey:

I was still where my parents live. There's a dollar store a couple of miles down the road in a small downtown section. I pulled into an empty parking lot, filed in behind a couple of elderly men and began a search for cards.

In just about every case, I headed to the toy section because cards in places like this are often displayed with the toys or up near the counter. But I couldn't find them in either spot. No luck at Stop 1.

The Family Dollar is situated just as you head out of town. I personally don't like Family Dollar. There doesn't seem to be as much available as there is at other stores and that potential for cards, which I can actually feel at other dollar stores, is nonexistent at Family Dollar. And I found nothing. 0-for-2.

This is a tiny town and I was surprised to find a store there -- but then again it does have two stoplights and that does seem to be the requirement for a dollar store. I was the only customer in the store and when I reached the toy section, I did spot one lonely Pokemon pack hanging on the display. I didn't buy it, but I did buy one of those squeeze balls for my doggie and when I checked it out the woman with a massive tattoo on her chest complained about getting a cold as she sniffled and coughed onto my doggie ball. I was beginning to question my dollar store quest. 0-for-3.

God bless those towns where the route that takes you in a convoluted path through the town so you can be sure to see every business in the entire village. No cards in the dollar store though. 0-for-5.

I was now reaching Finger Lakes country, which is as charming as you can imagine. Moravia features a sizable family grocery store, something that is a rarity these days outside of your larger cities. I stopped there to get some lunch materials and then checked the dollar store, where I struck out. 0-for-6.

This store wasn't easy to access. I spotted it on my left but couldn't figure out where to park. But a rule's a rule: if I see it, I have to go in. I found a one-way street, parked there, walked between a bunch of professional offices in the biting cold before finding a parking lot, walked across that, and finally discovered the entrance to the dollar store. It was all for naught. 0-for-7.

I've been to Fulton many times. For some reason I ended up in the wrong lane and was forced to turn left when I wanted to go straight. I was lost. But on the way back through town, I spotted the dollar store. Could this be the off-the-beaten-path store that finally yielded cards? Nope. 0-for-8.

This was getting to be a pointless exercise. Clearly, the dollar stores have a bizarre grudge against trading cards.

By now, I had gotten back home. I know for a fact there are at least four dollar stores in town. I decided to hit the Dollar General north of town just to say I did. But outside of being the tidiest, cleanest dollar store I had set foot in that day, with the most professional clerk, I saw no cards. I did buy an industrial-sized box of Little Debbie's Nutty Buddys, though, which got me through Games 6 and 7 of the NLCS. Love those things.

This was my first visit to a Dollar Tree that day. I rarely get to this store even though it's in a plaza with a grocery store and a couple of restaurants that I frequent quite often. I was a bit excited because I know people have found cards at Dollar Trees in the past. However, all I could find were boxes of Pokemon cards at a couple of checkouts. 0-for-12.

Time for the most familiar stops of the entire tour. There are two dollar stores at this particular plaza. The Dollar General almost never has cards. And I'm here to say the tradition continues. 0-for-13.

Thank goodness for Real Deals. I was pretty confident that the RD would break my 0-for streak since it's been so good with cards in the past. I was not disappointed. 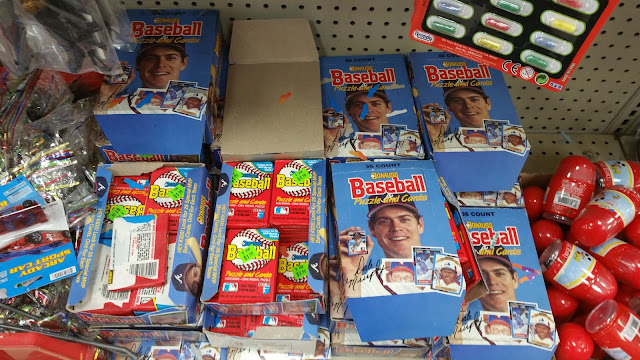 A few steps into the toy aisle I could spot Dale Murphy's face beaming at me from every direction. I knew what that meant:

Now, I am not above purchasing 1988 Donruss. I've done so many times. I've done so from this very store. I'll probably do so again. But I can't be featuring any more 1988 Donruss on this blog. It's just devoid of interest for almost every collector.

So I didn't buy any.

However, I did buy something else that was farther down the aisle. 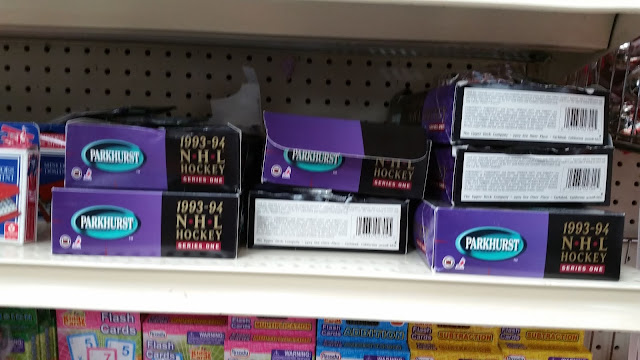 That was a pretty odd appearance in a dollar store, but even though I rarely buy hockey cards anymore I wasn't going to complain. My 0-for streak was over!!!!! 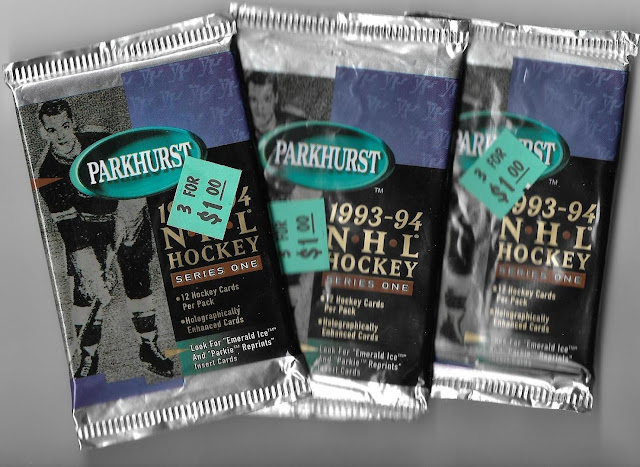 I snagged three Parkhurst packs. At 12 cards per pack, that is less than 3 cents per card. I will take that deal.

When I brought the cards to the register, along with a couple of 3-for $1.00 mailers, the hipster checkout dude said, "It's weird that we have random hockey cards from 1994."

Yeah, it is weird. And wonderful. I wanted to grab him by his beard and say, "ALWAYS SELL CARDS!!!! DO YOU KNOW HOW MANY DOLLAR STORES DON'T DO THIS????????"

But instead I just said, "Yeah, it's awesome." And I was on my way.

Here are the cards that came out of the three packs: 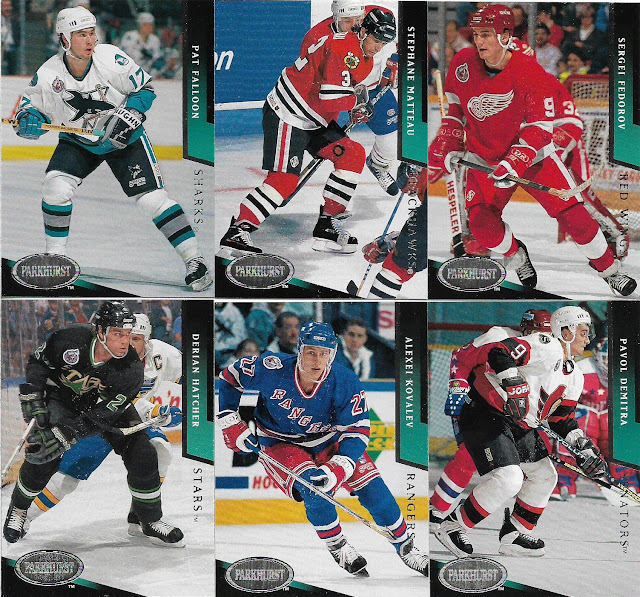 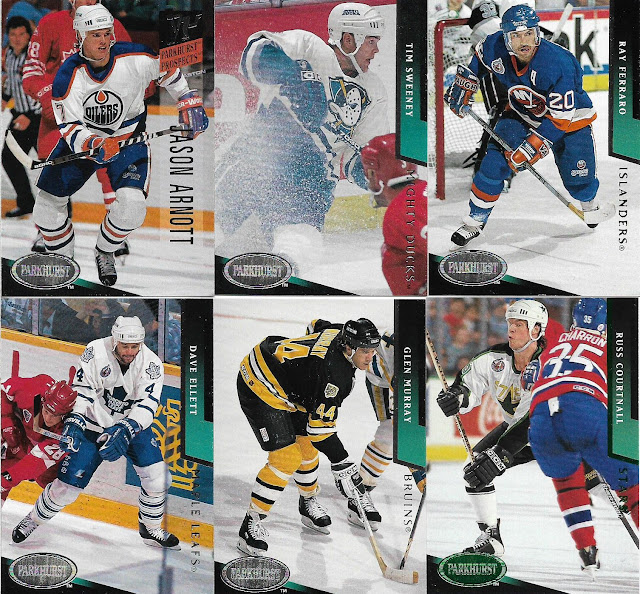 Just about every card I pulled was of a player that I know. The '90s were my peak NHL-following period.

Each pack featured an "emerald ice" parallel, in this case, Russ Courtnall. 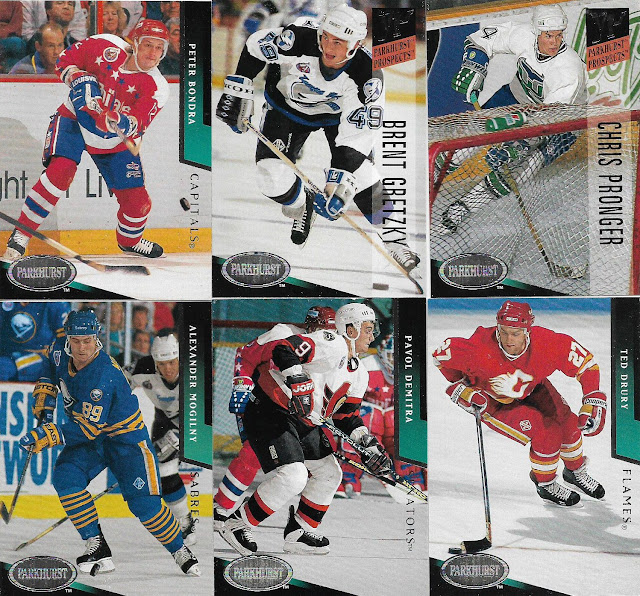 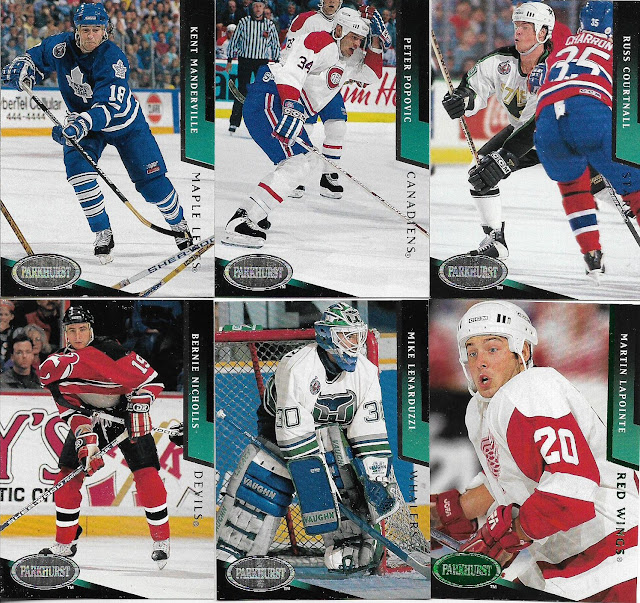 This pack featured the only Sabre I pulled and Wayne Gretzky's brother. 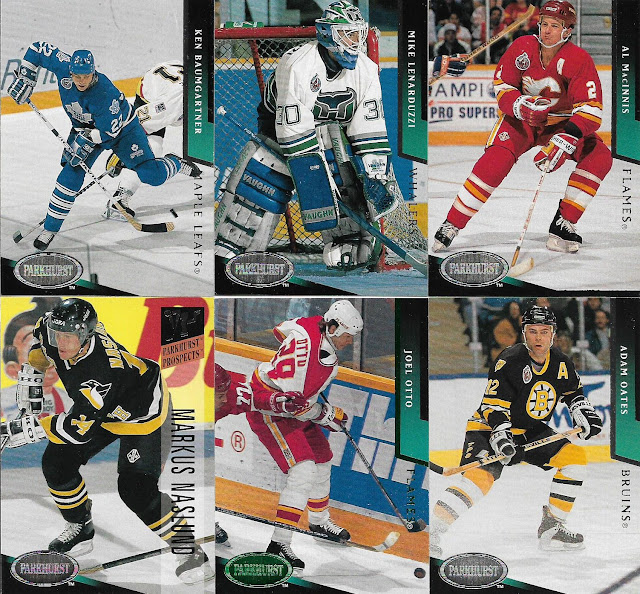 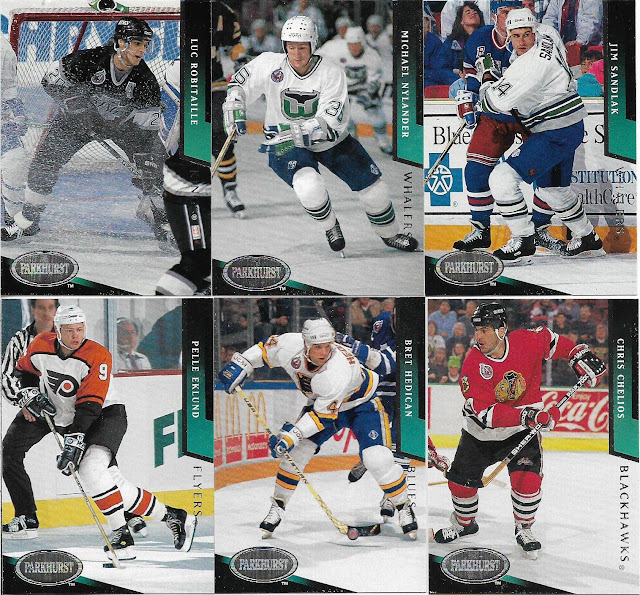 My only double of the three packs was Hartford Whalers goalie Mike Lenarduzzi.

So, that was pretty cool.

I know they're not baseball cards. But they aren't Pokemon cards either. And they aren't NO CARDS also.

Real Deals  is a small chain in upstate New York. It's based in Auburn, which is one of the towns I drove through in my dollar store expedition. I think there are maybe a dozen stores, mostly in Central New York locations like Lyons and Baldwinsville.

I don't ever want them to go away because they are the only dollar store where I've been able to consistently find cards going back to the very early days of my blog. 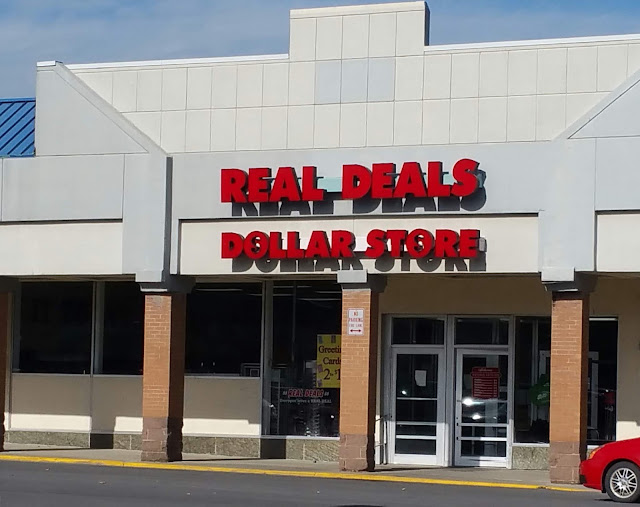 Clearly, other dollar stores have a lot to learn from you.

gcrl said…
Out here, the various dollar stores have their cards closer to the register in a standalone fixture, bit with the toys. The drug stores have repacks in the toy aisle. Also, Luuuuuuuuuuuuc!
October 21, 2018 at 7:26 PM

Old Cards said…
I would have bought the 1988 Donruss instead of the hockey cards, but I am a hopeless baseball card only fanatic. Congrats on your Dodgers winning. Should be a good series.
October 21, 2018 at 8:27 PM

Brett Alan said…
Where I am in NJ, Dollar Trees usually have cards, both repacks and small packs of new or recent product. I haven't seen any original junk wax packs in dollar stores here though.

It is indeed tough times for dollar stores. Most of their products are made in China, and the tariffs are making it much harder to sell those things for a dollar and make a profit.
October 21, 2018 at 11:17 PM

Fuji said…
Wow. Huge props for your dedication to this cause. I probably would have quit after striking out three or four times. I've seen cards at my Dollar Tree a few times, but never purchased anything. Figured... I'd be better off going to Target.
October 22, 2018 at 12:36 AM

BaseSetCalling said…
Dollar Tree stores usually, but not always, feed my jones for 30 random cards for a buck. Sometimes only 20 cards. But always a dollar well spent.

Billy Kingsley said…
As far as I know, Dollar General does not stock cards ever, a corporate chain decision. Bummer, as I have one about 3 minutes from my house.
October 22, 2018 at 1:06 AM

AdamE said…
I haven't seen cards at a Dollar General or a Family Dollar in at least 15 years.

Every single Dollar Tree I have ever been in however has had cards. They are not in the toy section though, they are always towards the front in their own little section usually by balloons. They always have Panini, Topps (in small packages of like 5 cards), Topps stickers, and weird little 20 card repacks. The repacks have a new card on the front and back and things like 87-90 Topps or Donruss in the middle. When UD still made baseball there would always be prior years UD also. (they also always have football, basketball, Hockey, and assorted other "junk cads")
October 22, 2018 at 11:55 AM

Defenders50 said…
They just opened a Dollar Tree two minutes from my house, and it had the Presstine 30 for $1 repacks and I believe some mini $1 packs of either Opening Day or BLB.

acrackedbat said…
Dollar Tree is the only markdown store selling cards anywhere near me. I've always hoped to find boxes at Big Lots but so far, no luck there.
October 22, 2018 at 3:05 PM

Mike Matson said…
Well...
The Dollar Tree my friend works at sometimes gets current year..
Dollarama sells 80 baseball for $3 in repacks, and just started selling 80 hockey for $4
October 22, 2018 at 7:14 PM

Bru said…
Phew! That’s quite the journey! In my experience, only the Dollar Tree here has ever had cards. Oh, and you probably still couldn’t complete an ‘88 Donruss set with all the packs shown in that photo.
November 8, 2018 at 1:30 PM