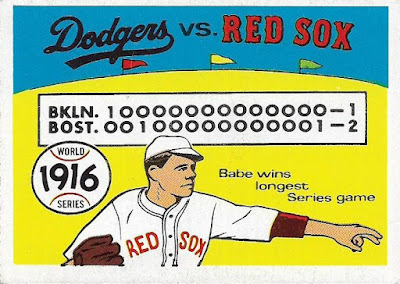 I worked last night during Game 1 of the World Series. This can be excruciating when the Dodgers are involved, mostly because a large-screen TV is on a wall immediately above my computer. I am surprisingly capable of avoiding just about anything else playing on that TV, but not the Dodgers in the World Series. Part of me wants to grab the remote and flip it to the Home and Garden channel just to take the pressure off, but I guess that'd be too weird, huh?

Last night, the cable to the building was out. It had been out for four days. Out of all the people in that newsroom, I had to be the guy to say: "hey, anybody know the TVs aren't working?"

So, the cable was reconnected around about the third inning of last night's game. I knew the game situation thanks to the usual online sources, but I'd rather watch on TV (with the sound off, of course). Online folks like to crab about Joe Buck and John Smoltz, and understandably so in many cases, but do they know how annoying they are when they second-guess every managerial move, like they do every game, and beat it to death like it's the only thing that happened in the game (If Nunez hadn't hit that home run, the Red Sox still would've been ahead 5-4, dead-horse beaters)? I was a little more upset by the Dodgers' mistakes on the field.

Anyway, I wasn't too crushed with the result. I expect the Red Sox to win this Series fairly easily. Anything else would be a surprise. And, I don't mind the Red Sox.

Exactly what I don't want is what happened during Game 2 of the last World Series involving the Dodgers and Red Sox. That is the game depicted on the above 1970 Fleer World Series card. Babe Ruth, during his first World Series pitching performance, gave up a home run to the Dodgers' Hi Myers in the first inning, then proceeded to throw 14 innings in the Red Sox's victory. It is the longest World Series game in terms of innings, tied with Game 1 of the 2015 World Series between the Mets and Royals.

Of course, the 1916 game started during the day and lasted 2 hours, 32 minutes. No chance of a 14-inning game being so friendly these days. 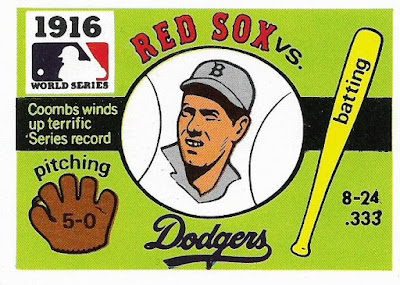 The 1971 Fleer World Series card for that World Series mixes things up a bit by featuring the Dodgers' angle, particularly Jack Coombs, a veteran pitcher who had appeared in the World Series with the Philadelphia A's twice earlier in his career. Coombs won Game 3 of the 1916 World Series to finish his WS career unbeaten at 5-0.

Here are the writeups on the back of both World Series cards: 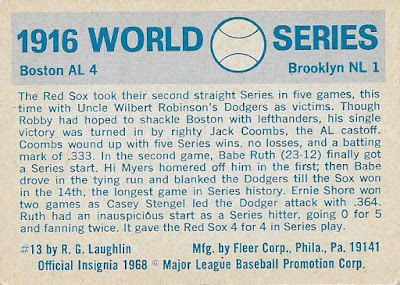 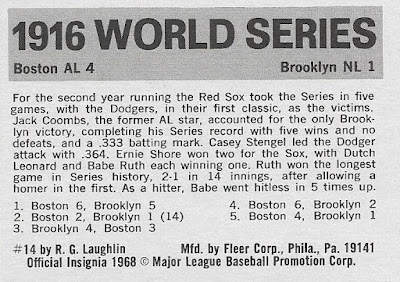 Everything you would want to know about that Series on those two cards.

The most amusing writing about that Series though I saw in a New York Times story yesterday. The Times recounted what it had written about that Series back in 1916, reflecting on that over-the-top sportswriting of the time. Here is their account of Game 2 of the World Series as told in 1916:

"Under lowering gray skies that finally yielded splashing tears of sympathy for a team mighty even in defeat, the Brooklyn Superbas went down today before the Boston Red Sox in the second encounter of the world's series."

I also enjoy their description of the Red Sox's uniforms as "carmine-hosed" and the quest to win Game 1 as "scrambl(ing) for the petals of the first blossom."

I won't be reading accounts like that from tonight's Game 2.

OK, OK, let's get to the giveaway. 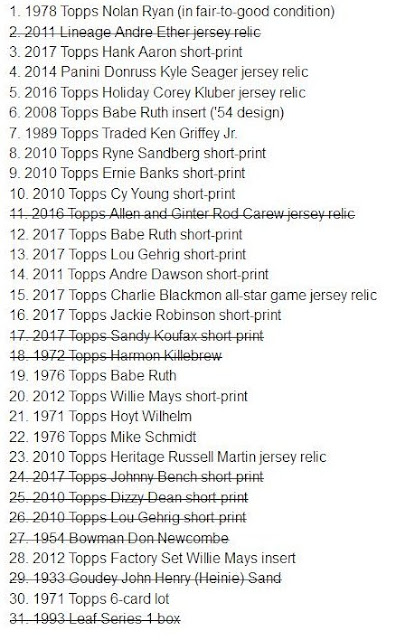 That means GOGOSOX60 is next with the 13th pick. He has said in a comment that he'd like the 2017 Topps short-print Hank Aaron card. So that Aaron is now off the board.

With that card selected, it is now Jason T. Carter's turn to make his selection. He's got until 7 p.m. Thursday to make his pick.

Once J.T. picks, then shoeboxlegends can make his pick.

On deck after shoeboxlegends are:

I'd request that those on-deck don't announce their picks until the people before them select their cards. I haven't confused cards yet, but I will be confused guaranteed if people pick out of turn.

Also remember to email me your addresses especially if you aren't a regular trader with me. I've already gotten some addresses sent to me so thanks!

I'd also like to mention there are several Babe Ruth cards still up for grabs. Perhaps someone can select one of those to commemorate that 14-inning game.

And scare off the voodoo of another 14-inning game tonight.

Jason T. Carter said…
Tough choices. The easy choice (for me) was swiped a few picks ago. It came down to Jackie, Junior, or Willie...and the winner is 2012 Topps Factory Set Willie Mays insert.

Fuji said…
I'm hoping the Dodgers will bounce back with three wins in LA. In a perfect world, they go seven games with the final one going into extra innings (hopefully you don't need to work next Wednesday).
October 25, 2018 at 10:57 AM