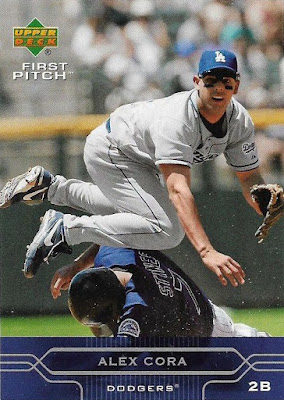 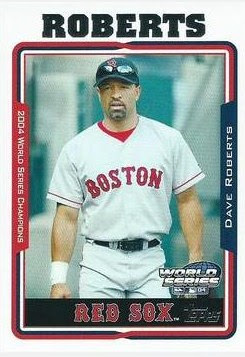 For someone who is as revered as a part of Red Sox postseason lore as Dave Roberts, there are not a lot of Dave Roberts Red Sox cards.

I had to swipe this image of Roberts from the Topps Red Sox World Series set because I don't have any Roberts Red Sox cards. I have many, many, many cards of Roberts playing for the Dodgers though.

What is more interesting for the respective managers of the two World Series teams is that it's even more difficult to find cards of the two managing for their respective teams. Go on, go to your collection and try to find a manager card of Roberts with the Dodgers or Cora with the Red Sox. You'll be searching a long time.

Thanks to the licensing hysteria that just gets worse and worse by the year, Topps doesn't produce cards of managers anymore, not even for sets like Heritage, which pays tribute to designs of sets that had manager cards.

So anyway, the latest giveaway post is appearing barely an hour away from the start of the World Series.

I would like to say that this is one of my favorite World Series matchups in many, many years. Not only have I liked both teams since I was a kid, but Yankees fans are just beside themselves and I think it's hysterical. As much as I want my Dodgers to win and will be sad if they don't, I win no matter which team claims the World Series. A Yankee fan somewhere will think it's a travesty and that will warm my heart for weeks as the days get colder.

I know some of you are probably wondering when I'm going to get to the giveaway portion of the post, but I'm trying to make these posts a little more interesting than: TIME FOR THIS PERSON TO PICK!

So in the spirit of continuing to tell you what's going on in my card life while I give away cards, I'm here to say that there are many reasons for looking at other collectors' want lists, and one of them is you never know when you'll discover -- while scrolling through the list -- a card that you didn't know you had. 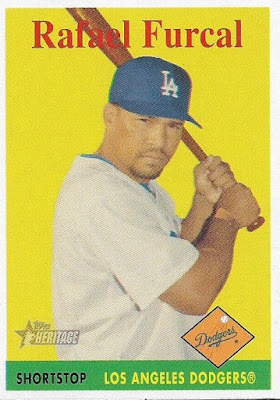 I was looking at gcrl's want list and there was a listing for Rafael Furcal's 2007 Heritage card, specifically mentioning "yellow letters". I am terrible at scouting out variations from sets that arrived just before I jumped completely into modern collecting. So this "yellow letter" variation was news to me.

While going through a bunch of cards to see what I had for gcrl, this Furcal Heritage card fell out very shortly after I spotted it on the list. YELLOW LETTERS!

I quickly went to my binders, turned to the 2007 Heritage Dodgers, spotted the Furcal card, and the team name was in WHITE LETTERS!

Variation corralled! Right in my very own home!

OK, NOW, it's time for the giveaway portion of the post.

To update the draft selections, Corky, Nick, Andy/bbcardz and jasongerman9 have all made their selections. Corky selected the 1993 Leaf box, Nick chose the 2010 Dizzy Dean short-print, Andy grabbed the Jackie Robinson short-print, and Jason has the Johnny Bench short-print.

Here is an updated list of what is available: 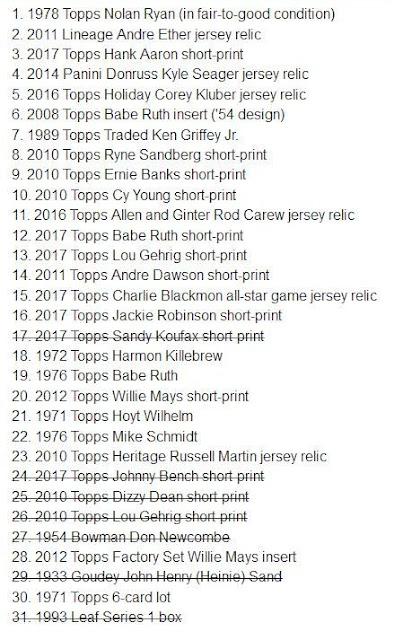 You'll notice that I haven't crossed out the Jackie Robinson short-print. That's because I do have an extra Jackie short-print. So if someone who is selecting later still wants one, I've got one for them.

OK, it is now Raiderjoe_FO's turn to make his selection. He can ponder that selection all during Game 1 of the World Series and all the way until 7 p.m. Wednesday if he likes. But if RaiderJoe chooses quickly, this is who is up next:

As soon as Raiderjoe makes his pick. Josh D. can make his pick.

OK, it's now time for me try to avoid the World Series while I'm at work, which is not an easy trick for someone who works in the sports department of a newspaper.

Yet, somehow it's not as difficult as finding manager cards in 2018.

Nick said…
I have exactly one card of Dave Roberts with the Red Sox (2004 Upper Deck). I've always been flabbergasted as to why there aren't more, considering how ingrained he's become in Boston lore.
October 23, 2018 at 9:34 PM

Raiderjoe_FO said…
I clicked on your profile to try to get your e-mail address and I got nowhere with that. Can you e-mail me at gortexturban at yahoo dot com? That way I can give you my address. Thank you!
October 23, 2018 at 11:50 PM

Brett Alan said…
With pick 11, I will select the 1972 Topps Harmon Killebrew.

Since the Bowman Newcombe came off the board, I was waffling between Killer and the Carew relic as the best option. Not a bad thing that the decision was made for me...can't go wrong either way, and I'm thrilled one of those three made it through.

Fuji said…
It feels good to stumble across a variation, but unless someone points it out to me I rarely discover them. Makes me wonder how many I have sitting in boxes... or how many I've given or thrown away over the years.
October 24, 2018 at 10:42 AM

acrackedbat said…
i'm certain many a variation has gone unnoticed, traded or given away. If it weren't for today's codes, I'd miss even more.
October 24, 2018 at 3:25 PM