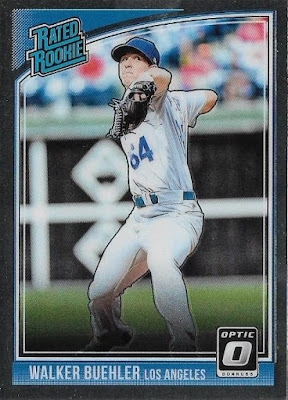 I have more than 30 different Walker Buehler cards. That's a lot for someone who hadn't pitched a game in the major leagues before 2017 and had appeared in just eight games before 2018.

In fact, 30 cards is more than what I have for some notable players of the 1970s, cherished and well-known stars with established careers. But that's just the way it is in modern card collecting. I was informed earlier today that Buehler has been in each edition of Topps' Throwback Thursday online issues for the last five weeks!! Rookies get all the love, all the overkill, whether some of us collectors are interested or not.

Here is how stupid it gets for rookies (and modern cards in general): 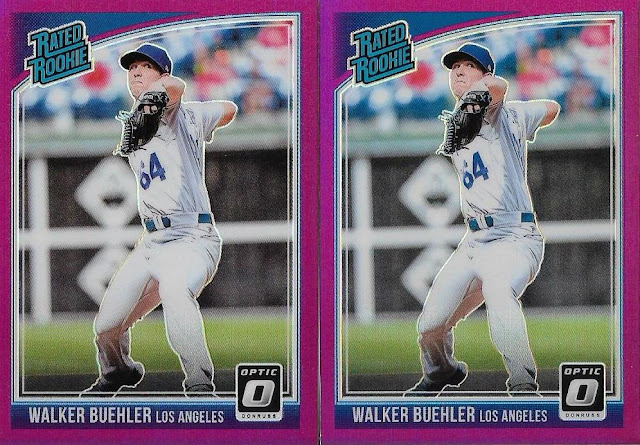 These two pink parallels of Buehler were sent to me by madding at Cards on Cards, along with the regular Panini Optic Buehler card.

The two pink parallels are not only parallels, but they are variations of each other.

How do I know that when each card appears to be exactly the same?

Well, I know because madding tipped me off. But also, because you have to turn these babies over. 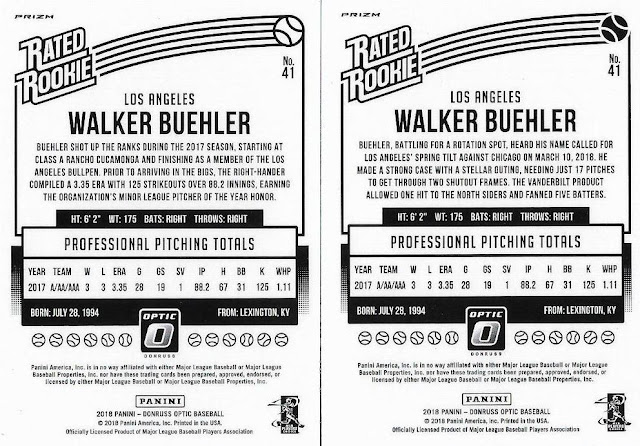 Notice that one card features a white baseball and one features a black baseball. One of these is a variation card (don't ask me which one, I go out of my way not to ignore Panini's foolishness). 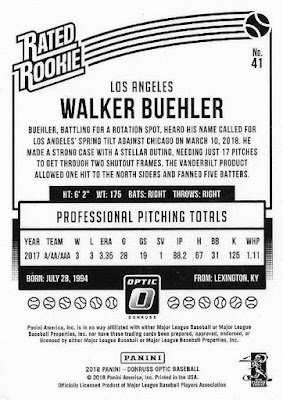 This also means that the base Optic Buehler card is also a variation or has a variation (depending on what the black baseball means).

It boggles my mind that Panini does this stuff. It's bad enough that Topps does this, but Panini feels it necessary to replicate some of Topps' worst habits while not even looking as good as Topps. Gee whiz.

The things I do for the Dodgers' Game 3 starter of the World Series (Go, man, go!)

Cards on Cards also sent several other current Dodgers, most of the shiny variety: 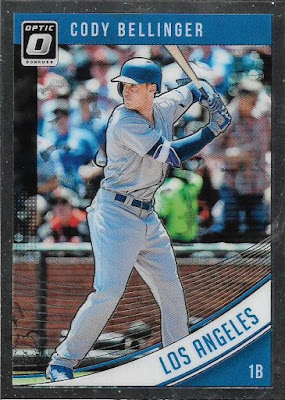 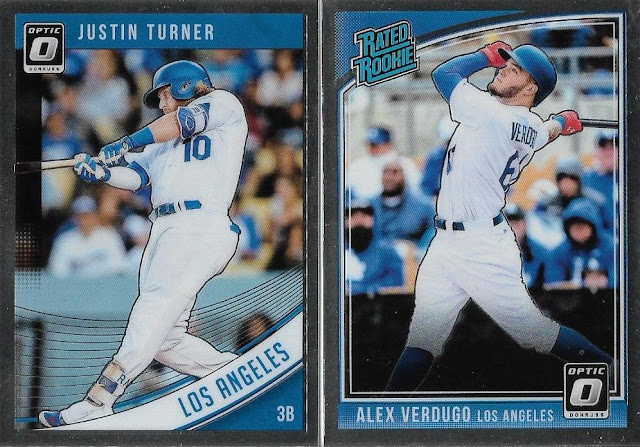 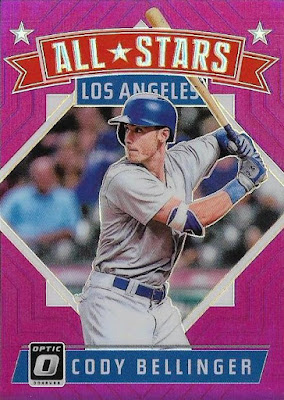 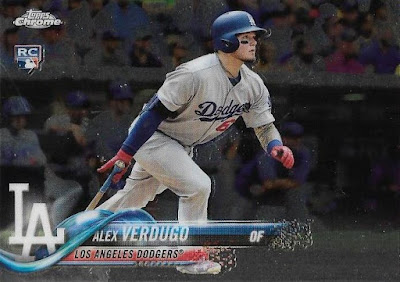 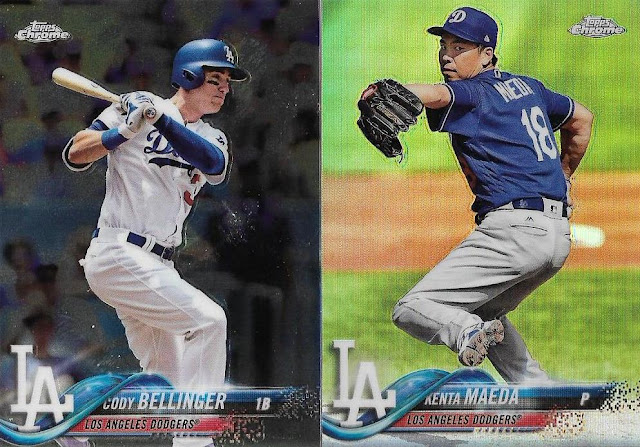 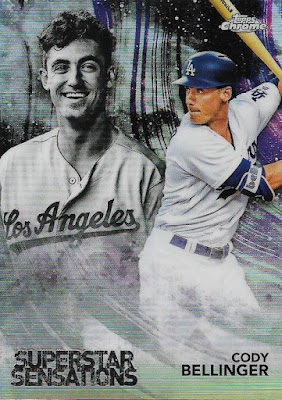 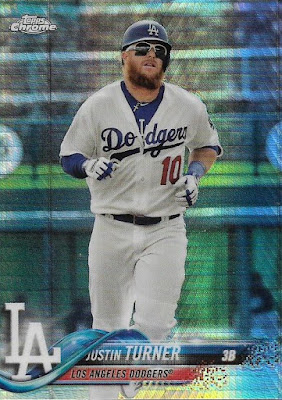 And there were just a few non-shinies, too. 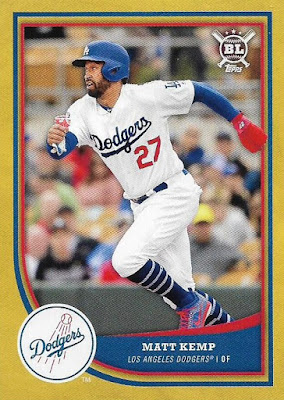 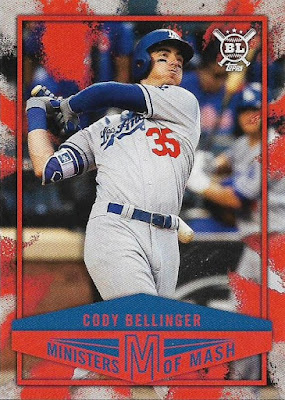 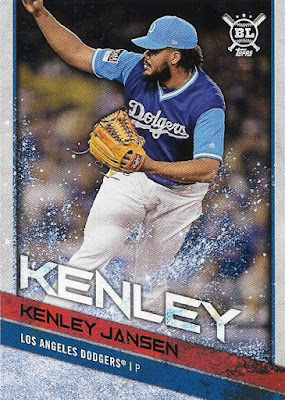 I sure hope these guys can win at least one game before the World Series is finished.

But before I turn my attention to Game 3, there is the matter of the 10th anniversary giveaway.

Two more picks have been made in the giveaway. 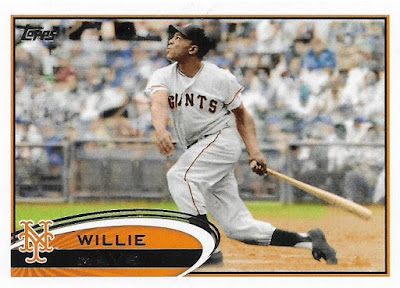 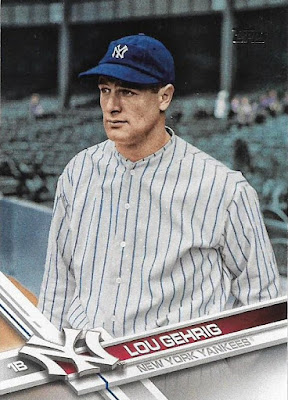 That's a lot of legendary cardboard there!

So that means it time for Julie Owens to make her selection. She can pick anytime between now and 7 p.m. on Saturday.

Here is what's left on the board: 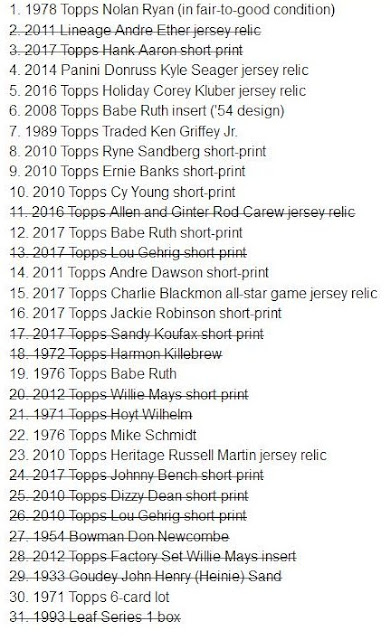 Once she makes her pick, here are the next people in line for selections:

Happy selecting! Hopefully, next time I post, the Dodgers will have their first Series win since Game 6 of last year's World Series.

hockey kazi said…
My first choice is still available--will it be when it's my turn? As Panini would say Go |Los Angeles Go
October 26, 2018 at 7:13 PM

acrackedbat said…
Buehler is pitching, even as I make this difficult decision - by far the hardest of my day. Thanks for keeping us informed and entertained over these past ten years. While I've only been around for four or so of them, I've read most of your posts! No easy feat! And now for my choice...2010 Banks short print. Thank you!!!
October 26, 2018 at 8:33 PM

Nick Vossbrink said…
Surprised but happy that some old stuff lasted this long. Don't know if that means that more of your readers focus on the new cards or if it means that most of them already have those cards. I'll go for the 1976 Mike Schmidt. Thanks!
October 26, 2018 at 8:59 PM

BaseSetCalling said…
There is a picture circulating on Twitter (2nd hand, I don’t tweet) of Buehler walking off with Koufax participating in the standing ovation. I saw that on the broadcast. Would make one heckuva baseball card.
October 27, 2018 at 2:15 AM

acrackedbat said…
The Schmidt, Ruth and 71s are already part of my collection. I was torn between Banks and Sandberg. I went with the older player. You offered a lot of variety here, something for everyone!
October 27, 2018 at 1:14 PM

madding said…
Two of those Buehler cards came in the same pack, but I can't recall which at the moment. I also later realized that Optic is a really small set, so buying large packs of it is kind of a stupid idea.
October 28, 2018 at 4:18 AM

Fuji said…
Sure hope Kershaw can help the Dodgers take this series back to Boston. I don't think I've ever rooted for the Dodgers as much as I have the past few days. Let's go Dodgers!
October 28, 2018 at 8:48 AM