Where have you gone Joe DiMaggio cards? 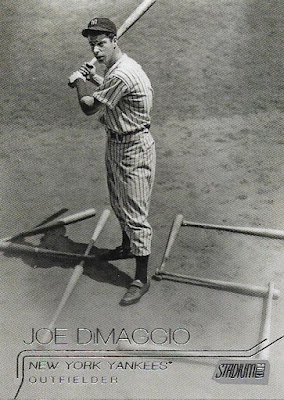 I've mentioned several times the amount of Jackie Robinson cards I own. The current total is 251.

Only two of those cards are from when Robinson was playing. A total of 24 were made prior to 1997. The rest were churned out in the last 20 years.

My Robinson total is no great feat. The amount of modern-day Jackies created has helped tremendously as have the many collectors who know my appreciation for the Dodgers and historic Brooklyn baseball figures.

I can't help but accumulate a large total.

To illustrate further, let's take a star from a slightly earlier period than Robinson, Joe DiMaggio.

How many cards of him do I own?

I possess the beauty that you see at the top of the post. Why doesn't every card look like that?

And the others that I own: 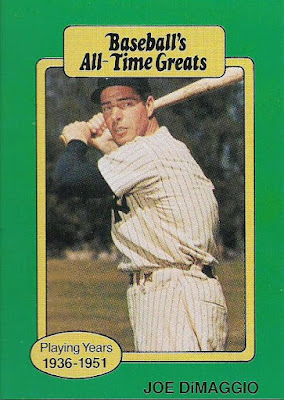 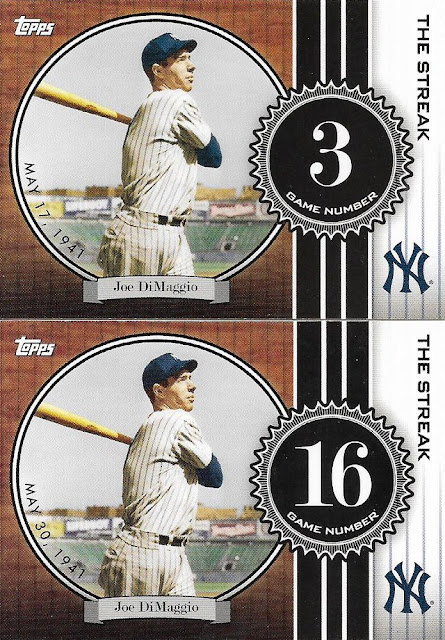 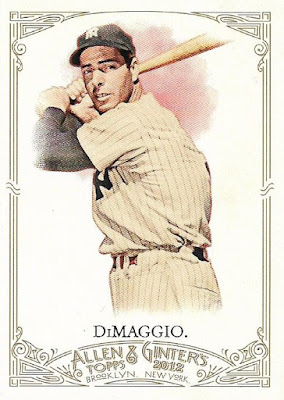 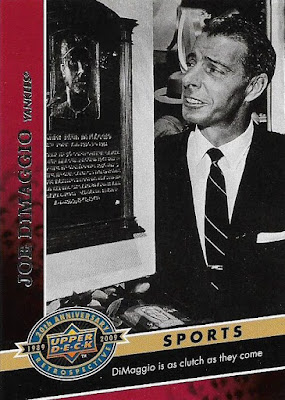 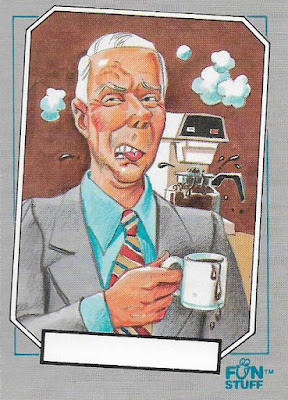 Quite a varied group for a mere seven cards.

From the subversive Baseball Enquirer Mr. Coffee card to the mind-numbing hitting streak inserts, my collection is a catch-all for DiMaggio Whatever. And it's an embarrassing amount for a Hall of Famer.

The tiny total of cards of one of the most famous baseball players in history is a product of my lack of interest in the Yankees, my minimal interest in collecting star players, and, probably most of all, the ever-present licensing rules that hover over every modern baseball card set.

Not only is Topps restricted by the MLB agreement to issue a limited quantity of cards of retired players, but many retired players -- especially the legends -- or their families must sign off on the former player appearing on cards.

This is why certain legends show up on cards ad nauseam while others are overlooked.

Certain decades are favored over others as well. Retro cards treat the 1950s and 1960s very well. But other decades are somewhat ignored.

Take the 1930s, for example, the decade in which DiMaggio's career began.

With the help of The Hardball Times' 1930s All-Decade Team, compiled about five years ago, I quickly reviewed the number of retro cards (created after the year 2000) available for these players. This was a very careless exercise. All I did was go on COMC and see which retro cards were available for each of these players. I dismissed parallels, variations, inserts, and multiple versions of the same player in the same set. I just wanted to see which base cards were available. I also didn't count painstakingly. I just wanted to get a general idea for each player.

This is what I found:

Mickey Cochrane, catcher: around 17. The vast majority were Upper Deck. No Topps.

Lou Gehrig, first base: Plenty. I gave up after I went over 50. Topps is all over Gehrig. It's pretty clear that Topps looks for the big fish and ignores the so-called minnows.

Jimmie Foxx, first base: Also plenty. One of the rare cases where Topps, Panini, Upper Deck and Fleer were close to even in the number available.

Charlie Gehringer, second base: 18. Not a single Topps card.

Stan Hack, third base: zero. Not a superstar, but he put together several notable seasons.

Arky Vaughan, shortstop: seven. Panini has them all.

Joe Cronin, shortstop: 15. Cronin may be helped a bit because of his Red Sox ties. But it's nothing close to the treatment given retro Yankees.

Joe "Ducky" Medwick, outfield: six. He should have about 50 cards based on his 1937 season alone.

Dizzy Dean, pitcher: 26. Dean has been virtually ignored by Topps except for him appearing in hobby-only sets like Tribute and Triple Threads. Besides Gehrig, Dean was probably the first 1930s player I knew and such a colorful character should be on more current cardboard. He was a semi-regular on Hee Haw!

I think Joe DiMaggio is more closely associated with the 1940s, but just for kicks, here is his retro card availability on COMC:

DiMaggio gets the honor of appearing on a couple of sets all by himself, which I didn't bother to count. But you can see his total is paltry when compared with some of the other greats like Gehrig and Ott.

The DiMaggio estate has been particular about how his name is treated since his death in 1999, which has likely limited the amount of new cards available. But still, it's almost a crime when compared with the availability of Mickey Mantle retro.

But there is no shortage of DiMaggio on insert cards. And this is where you find most of the new cards of legends these days in stuff like Topps flagship and Heritage. You can still find base-card legends in Allen and Ginter, Archives and Gypsy Queen.

But good luck finding a card of Stan Hack or Harlond Clift or even a Topps Charlie Gehringer.

If you didn't shock the world or wear pinstripes or play in the 1950s, apparently nobody wants ya.

Mark Hoyle said…
How many Ted Williams cards do you have in your collection. I collect three of the guys on your list. Foxx, Cronin and Grove.. I would bet I have more cards of each from their playing days than I do retro cards of each of them. I just don’t chase many of them from non playing days
March 9, 2018 at 8:30 PM

steelehere said…
I think part of this is laziness on the card manufacturers. After the big names that they attempt to pursue individually (Ruth, Mantle, Dimaggio), I'm sure most manufacturers limits their efforts to include deceased athletes in their sets based on who is part of the client roster of CMG Worldwide Sports.

There was a really good story on 60 Minutes 7-8 years ago about CMG and how they work.

Billy Kingsley said…
That's actually better representation than I would have guessed. Two of my three sports like to pretend that they didn't exist before the 1980s, except for one or two token earlier players. Many of the people from before then don't have a single card in existence.
March 9, 2018 at 10:08 PM

The Lost Collector said…
I'm not organized enough to see how many DiMaggio cards I have, but I definitely feel like I have a lot less of him than Mantle (duh), Ruth, Berra, etc.
March 10, 2018 at 6:56 AM

Nick said…
You know, I swear I was planning on writing a post similar to this one in the near future. I've often noticed that DiMaggio doesn't appear in modern sets as often as a lot of other stars from his era. Dizzy Dean is another guy I'd love to see more cards of these days.
March 10, 2018 at 12:20 PM

Brian said…
Panini's Diamond Kings set has done a slightly better job since it resurfaced of having a wider variety of guys pre-1950. I have to believe that if DiMaggio had any regular issue Topps cards back in the day we'd be drowning in reprints of them right now. It's one of the things about Topps' logo/license monopoly that I hate the most - Topps is so self interested that if they played before Topps started, they don't care about the guy. Especially with Allen & Ginter and Gypsy Queen designs - just begging for older hall of famers and even lesser stars to be represented.
Don't want to encourage Topps to add yet another product to their lineup, but maybe Panini (or even a new company) could make something to fill in the gaps of the Depression era and WWII era that only had a few releases.
March 11, 2018 at 3:09 PM