Moved up in the rotation

March 16, 2018
My card desk may not show it, but I have a systematic way of showing off cards I receive.

The only times I make an exception is when I get a little too excited about a card and I just have to babble about it right away.

This is one of those times. Somebody is getting moved up in the rotation.

Yesterday, I received a two-card envelope from R.C., who's sent me a few special cards over the years. 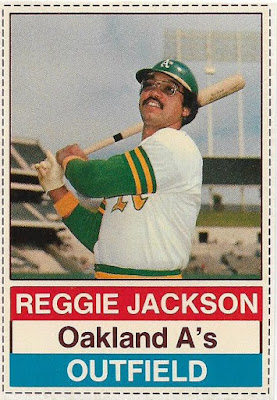 The first card is pretty fantastic. It's one of the best-looking cards from the 1976 Hostess set, a set that I am collecting.

I really like the restraint on the cutting of this card. I do a little celebration when the collector has the forethought to cut around the dotted lines. Nice work, previous collector.

One drawback to this card, though. 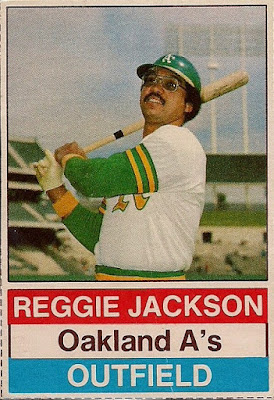 I own it already.

I found it at a card show a couple of years ago. It was really a triumphant find, the best surprise of that show.

So I have an extra Stars & Stripe Reggie to spare. I would like to trade it for another '76 Hostess card that I don't have, preferably something in decent shape, but it can be anybody, a scrub compared to Mr. October, just as long as I don't have it already.

So, get at me, and all that stuff.

But the Reggie card, even as great as it is, even if I didn't already have one, is definitely not why I moved this envelope up in the rotation.

The reason involves a card in not nearly as nice a shape as the Jackson Hostess card. Nobody showed any restraint with this card. But I don't care: 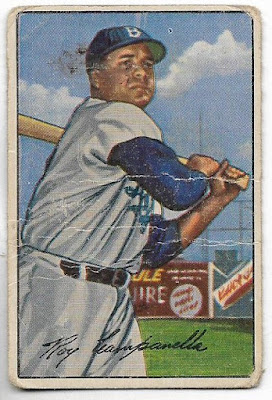 Do you know how many times I look for 1950s Roy Campanella cards?

The answer is: I never do.

But now I can not look without a thought about what I'm missing. What a glorious card.

Campy will go next to my '52 Bowman cards of Reese, Hodges, Furrillo and Branca. Shockingly I already have most of the big names from this team set.

I may need to move '52 Bowman up on my list when I hit my next card show.

Yep, I think '52 Bowman just got moved up in the rotation.

Angus said…
Yeah, I think those cards are worth jumping the mail queue.

Commishbob said…
Two super cards. The Reggie is one of the best looking of all the Hostess cards. The red/white/blue design and that A's uni are a nice combo.

Fuji said…
That 76 Hostess Jackson is beautiful. I first saw it on the Commish's blog last year and immediately grabbed myself a copy off of eBay. Everything about it says 70's baseball. Plus I love seeing the Oakland Coliseum from my childhood in the background.
March 17, 2018 at 11:37 AM

Chris said…
That is a nice 1-2 punch from RC. The Reggie is very colorful and perfectly cut. And that Campy is fantastic in any condition! Now let's see the rest of your 52 Bowman Dodgers :)

I'm with you on the Campy prices; I tried like hell to get a '55 Bowman back in the day but couldn't afford it. A couple years ago I bought a '53 Bowman Campy..it's a fantastic card, but I got caught up in an eBay bidding war and overpaid. I was hoping to keep it $100 but it ended at like $159.